If you click on a link and make a purchase we may receive a small commission. Read our editorial policy.
Developer: Gust
Publisher: Koei Tecmo Games Co

When I told a friend of mine that I was reviewing the latest entry in Gust’s long-running Atelier series, she remarked, “wait, which one of those fanservice-y JRPG games is that?” While I did assuage her fears that it was not, in fact, “the boob game” (that would be Senran Kagura), I can’t exactly fault her for her confusion.

Atelier first came to Europe and North America along with a wave of other niche-leaning JRPG series, like Ar Tonelico and The Legend of Heroes, at the tail end of the PS2 era. But while I embarked on many melodramatic adventures starring amnesiac teenagers in preposterous outfits at the time, I never gave the Atelier series the time of day. Now, however, with Atelier Ryza kicking off a fresh trilogy in the franchise, I’ve finally taken the chance to delve into its alchemical mysteries, and I’ve found them far more alluring than expected.

On its surface, Atelier Ryza is a JRPG so bog-standard that you’d be forgiven for taking it as an affectionate parody of the genre. The characters slot easily into their requisite roles: Ryza [spunky protagonist] is a farmer’s daughter who dreams of big adventure all day with her buddies Lent [musclebound jock] and Tao [nebbish nerd].

One day, a mysterious alchemist named Empel rolls into town, along with their impossibly voluptuous bodyguard Lila (yep, there’s the fanservice my friend was talking about) and, after some cursory shenanigans, the two outsiders begin to teach Ryza and her friends the ways of adventuring. 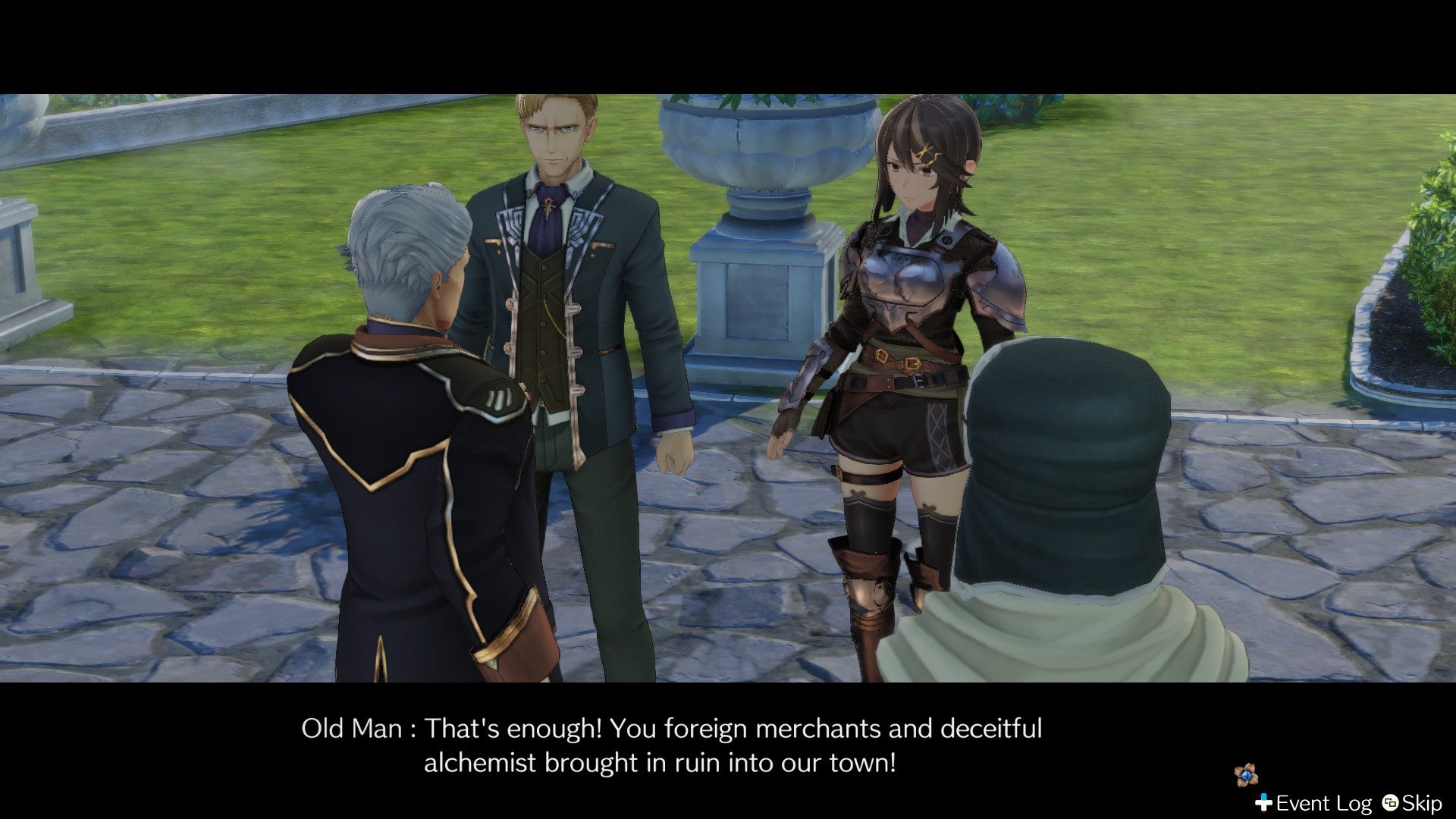 As their skills mount, however, the trio stoke the ire of the extremely traditional villagers - including their own parents, who begin to blame Empel and Lila for a series of escalating catastrophes which are beginning to threaten the whole of the island they live on.

There’s a school of thought in game design that says the first hour of a game is the most important, because it represents your one chance to hook a player in and never let them go. For example, I recall reading long ago that Nintendo staff forced Rare to redo the first two missions of Star Fox 64 many times, until they were of acceptable quality.

That’s… not so much the case here. Despite its many virtues, to say that Atelier Ryza fails to achieve the “hook ‘em in the first hour” paradigm would be quite an understatement.It’s a fairly complex RPG, with a tangle of interlocking systems that build over time to form a compelling, comfortable whole. But it certainly takes its sweet time coming together.

For my first four or five hours in the game, I found Atelier Ryza to be pleasant but dull. I spent my time running around town from plot beat to plot beat, with little in the way of actual play, beyond a steady stream of tutorials explaining the game’s core conceits.

And while I found the writing charming enough, the story being told was so stock-standard that it struggled to keep my attention. However, once the world actually opened up, around the five-hour mark, I was shocked at the scale and quality of the game that was hiding behind its glacial pacing and morass of menus.

Despite everything that might appear generic about it, Atelier Ryza is, mechanically speaking, a very distinct game from its contemporaries - and that’s partly why it remains such a niche series. While its battle system is robust, and offers plenty of tactical depth, it diverges from most RPGs in that the XP you gain from defeating monsters or bosses is quite minor, in the grand scheme of things. 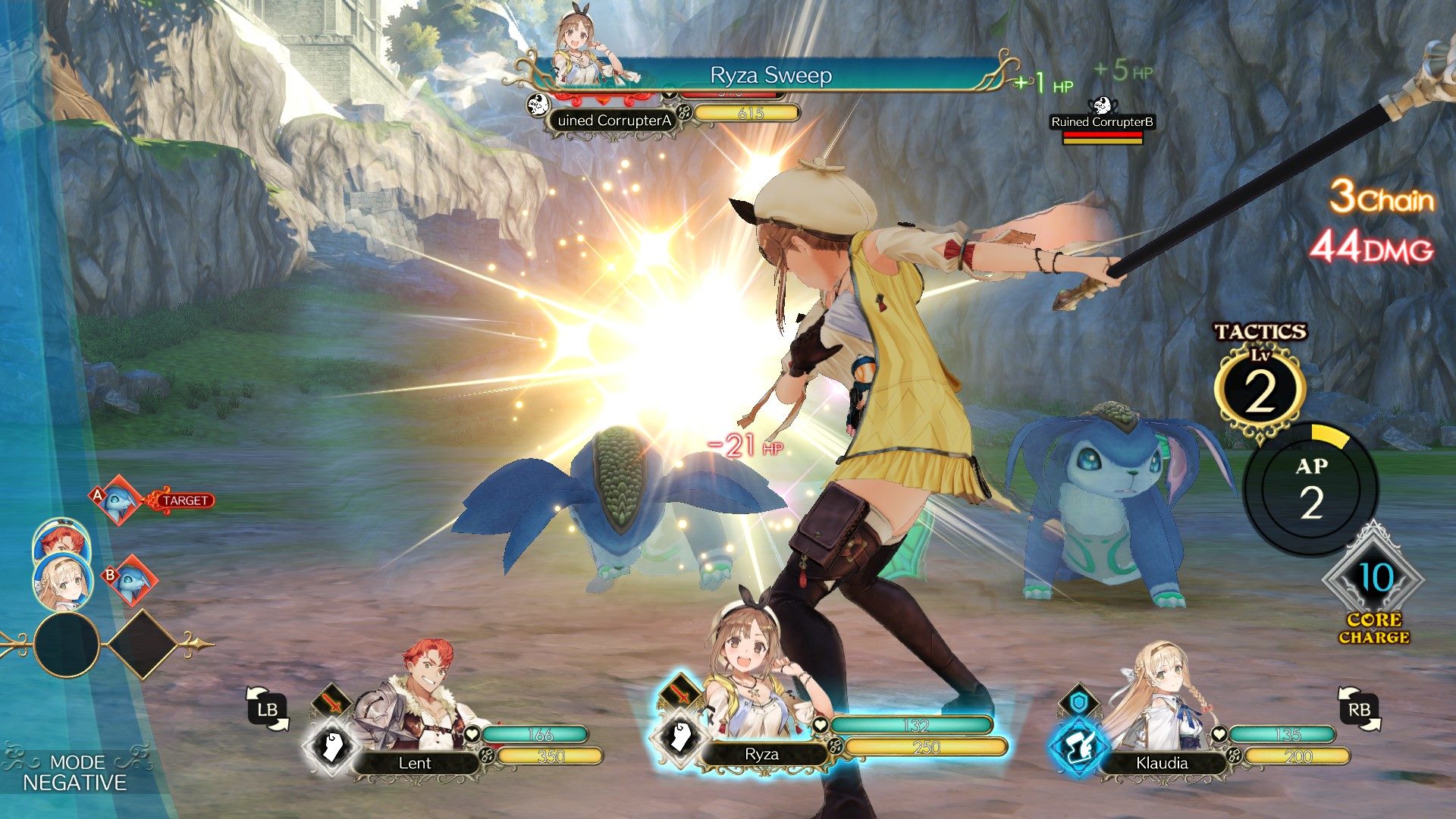 This is a deeply gear-driven game, hewing closer to Stardew Valley than Diablo, where gathering rare plants to spin better cloth for your armor will give you more mileage than grinding out a few levels. (By the midgame, the only reason I was levelling my characters at all was to increase the stat that governed the quality of gear they could wear). To put it succinctly, the Atelier series is Crafting: The JRPG, and whether or not you enjoy wandering your way through pastel forests to cut down trees and catch bugs will likely determine your enjoyment of the game.

For my part, as an avowed fan of Harvest Moon (and its sister series, Rune Factory), I quickly become a fan of anything that lets me enjoy the meditative routine of collecting materials to make my party stronger. Crafting systems can be a vestigial chore in many other RPGs, but every aspect of Atelier Ryza’s gels together to create a feeling of rest and relaxation that’s still rare in the world of games full stop.

For example, the fact you can fast-travel almost anywhere in the game at the touch of a button makes searching for that one elusive material easy rather than frustrating, and the penalty for death - a few lost materials, and not even a “game over” - is so relaxed as to be almost non-existent. 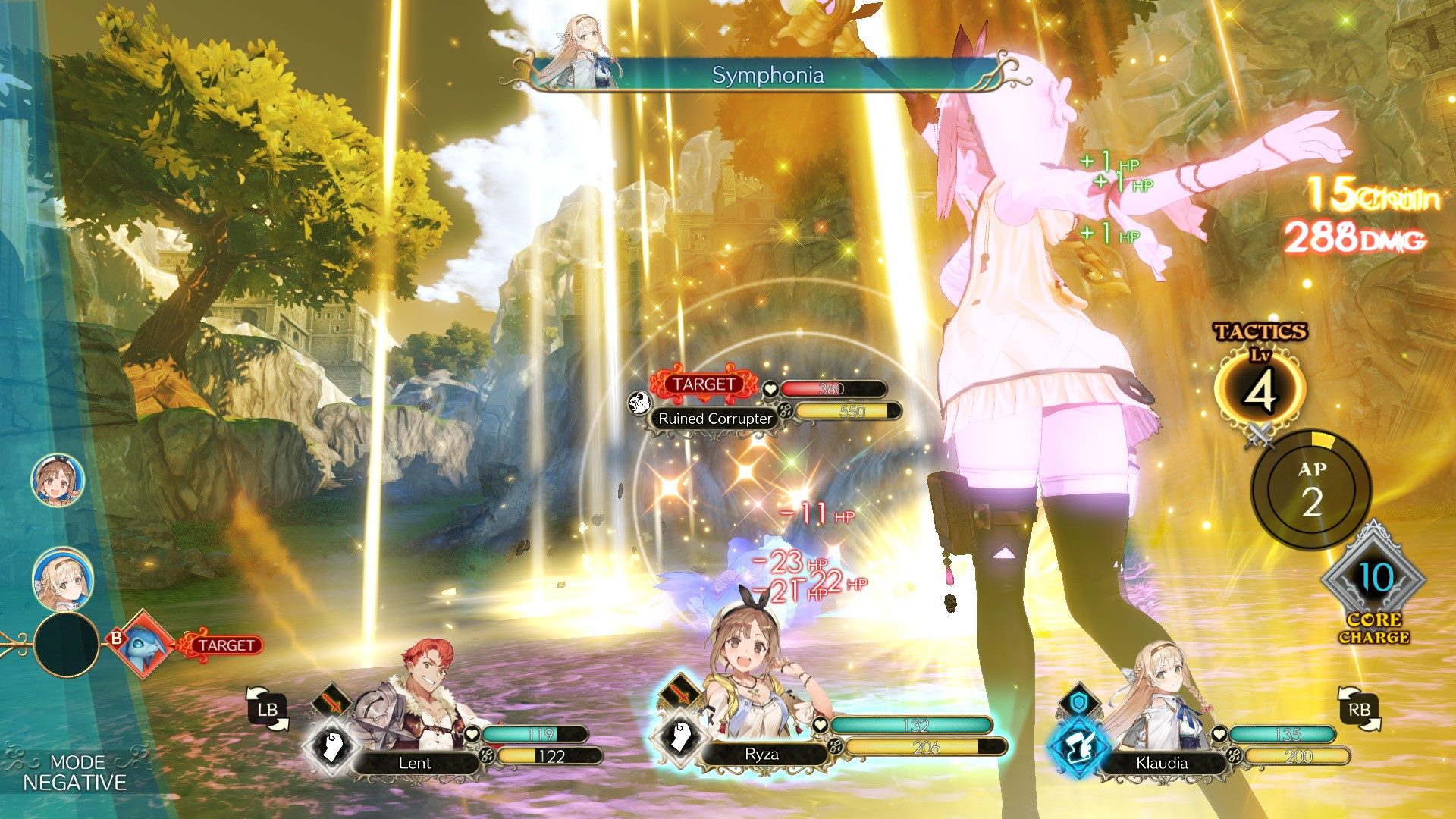 Still, while the game might promote a chill atmosphere, it can be ruthless in its own way, too. It only features a handful of mandatory boss fights across its 25-hour campaign, but when I faced the fearsome Dragon Lord with shit-tier gear, I got stomped into oblivion in three turns flat.

Some difficulty curves are more fun. There are certain points where Atelier Ryza drops its arguably-excessive tutorialization, and asks you to dive into the bowels of its intimidating alchemical system in order to progress. The hours I spent trying to wrap my head around that, were the most fun that I had with the game.

You can get fairly far just by remaking your gear with rarer base materials, such as cloth or ore (a generic “quality” stat determines the basic effectiveness of a given item), but the real depth comes from the buff-giving traits that each material carries. 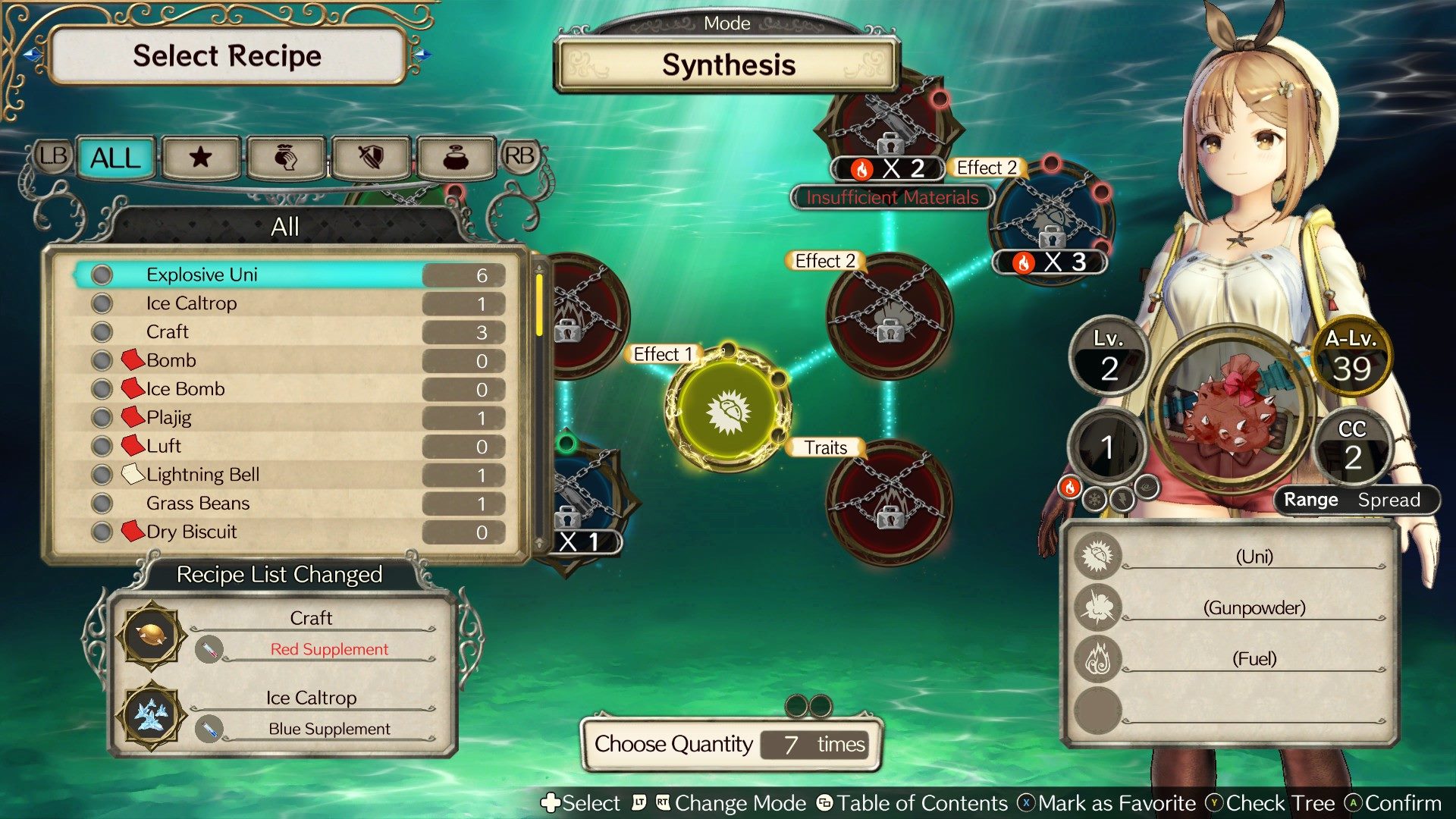 For example, if you’re trying to craft a piece of good armor for your main damage-dealer, you would throw in materials with traits like “attack bonus up” or “critical rate up.” Within the crafting tree, you can throw in materials with elemental values, too (fire, ice, wind, or lightning) in order to activate valuable bonuses like like a more effective heal, or a flat boost for a given stat.

Though it’s easy enough to make something halfway decent with just a bit of effort, there’s enough depth here that power-gamers could easily break through and create truly game-shattering items with enough patience. 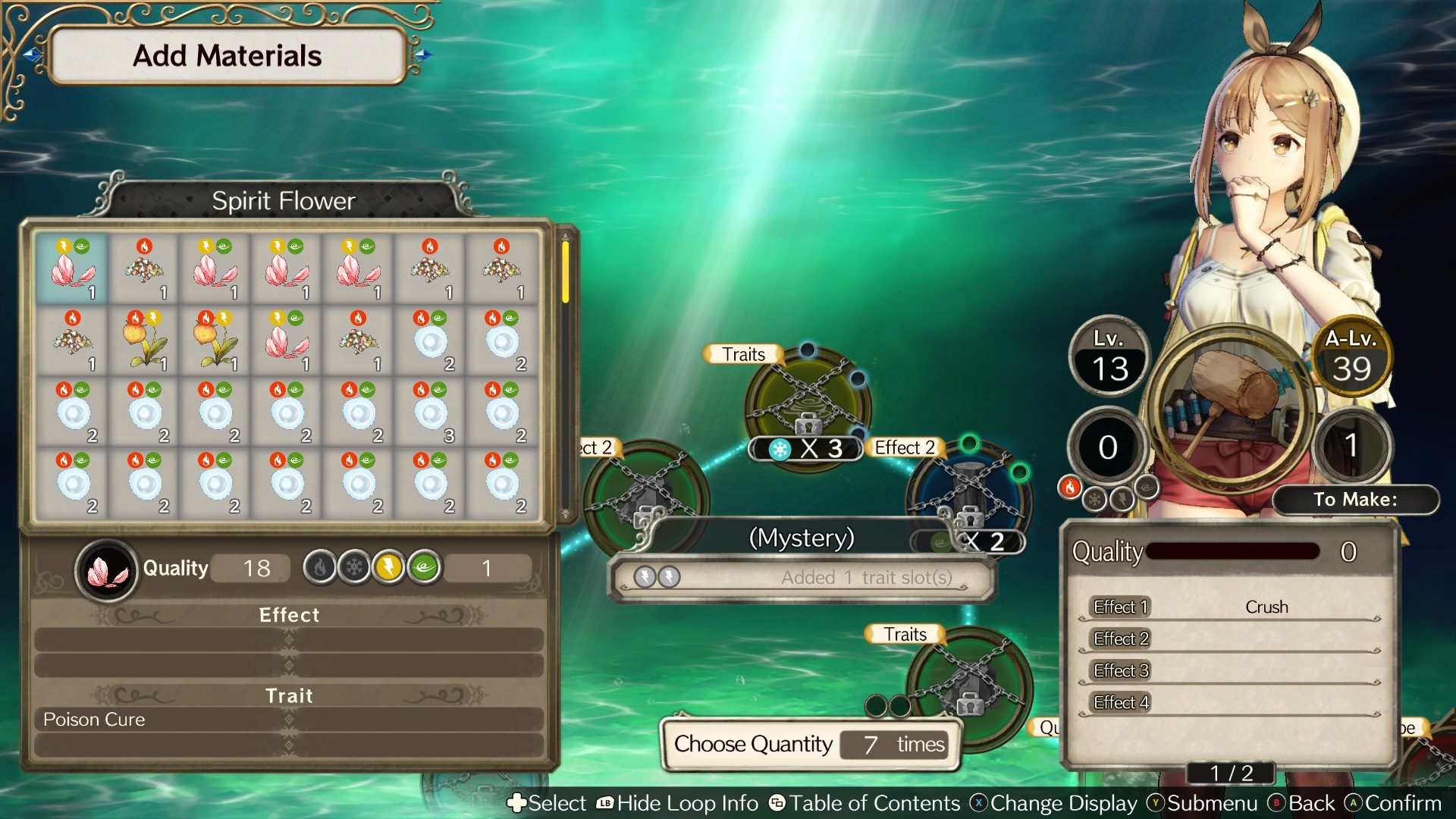 Returning to Atelier Ryza’s plot, one astute online commenter once described the whole series as “the first town in every RPG, only extended to the whole game,” and I think that’s particularly accurate in the case of Ryza. Unlike many games of its type, which tend to spin out into baroque battles against thinly-sketched celestial beings, the actual story manages to remain surprisingly grounded.

It still explores some fairly interesting themes, such as environmental degradation and the empires that perpetuate it. And while I don’t think it’s breaking any new ground overall (especially in the character department), its narrative still managed to escape the tar pit of the early hours, and that’s definitely worthy of praise.

Overall, I don’t think Atelier Ryza is the kind of game that’s going to change many minds. Though it ended up surprising me, I would argue that I’m the prime audience for it: a lifelong JRPG fan who enjoys dabbling in games with light sim mechanics. If you can look past its obvious pacing issues - and some of its more gratuitous character designs - Atelier Ryza is a solid slice of JRPG comfort food that goes down easy and might just leave you asking for more. If you’re part of that in-group - and you likely know if you are - you’re in for a thoroughly enjoyable experience. 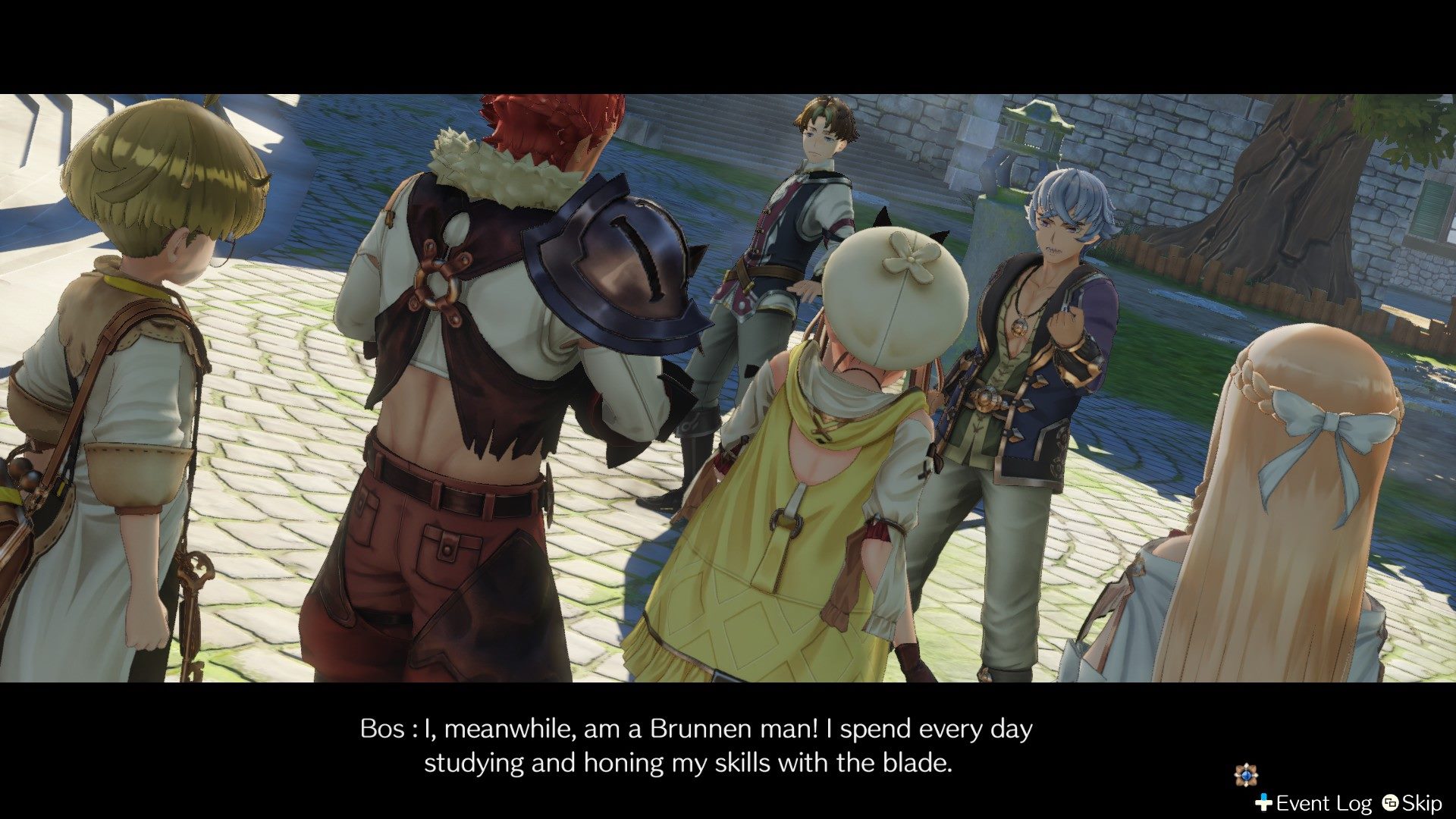