If you click on a link and make a purchase we may receive a small commission. Read our editorial policy.
Atomicrops review
A vibrant bullet-hell roguelite that’s initially off-puttingly tricky, but keeps you hooked with its inviting presentation and a bumper crop of upgrades and approaches.

Atomicrops is not your granpappy’s pixel art farming sim. It’s not a farming sim at all, really, but more a twin stick bullet-hell-and-tarnation with some very light nods to life-sim elements through upgrades. It’s also moreish, dizzyingly vibrant, and full of more squirming veggies than when you threw up that carrot cake your mum tried to make look like a regular birthday cake by dumping a bucket of sprinkles and icing on top.

Straight off, Atomicrop’s menu theme sets the tone. A chaotic, twee audio collage full of cartoony guffaws that sounds like it was composed on a banjo made out of a milk carton. It’s nauseatingly gleeful, and I want it to play every time I enter a room for the rest of my life. This is a world of mutant spuds and carnivorous plants, where you can marry a grasshopper and work together to kill the sun with a peashooter. It’s a Saturday morning cartoon after eschewing the cocoa pops for a healthy slurp of toad, or an advert from the 90’s shouting at you about how you can’t handle a sour lollipop. Obnoxiously bright, absorbingly nostalgic, and unironically pretty radical.

Each run in Atomicrops consists of five seasons, lasting three sessions/days each. From an initially tiny plot of land at the centre of four different biomes, you’re given two measly minutes to run off, kill things, collect seeds and upgrades, run back, plant and water the seeds, fertilise them with the blood of your enemies, and maybe lay down some turrets or scarecrows. Then night falls, and you’ll fight off several waves of massive slugs or bunnies with sniper rifles trying to snaffle your prize turnips.

Eventually, the sun rises again. You harvest what you’ve grown for the cashews Atomicrops uses as currency, then a helicopter turns up to take you back to a hub area. Here, you can buy guns, upgrades, and seeds, as well as spend some of the rare roses you’ve grown to heal, or even to woo companions. Give them enough roses and they’ll join you back on the farm, helping you with combat or growing crops. Then it’s back to hoeing up vittles and blowing up critters. 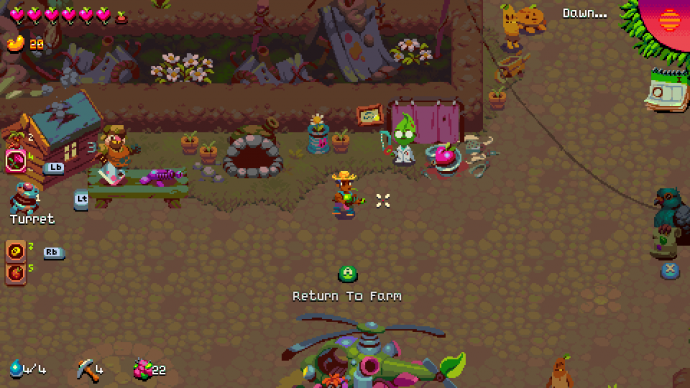 Every third day, the nightly wave is accompanied by a boss, like an evil tractor or a rabbit riding a giant snail. Survive the third day, and on return you’ll go visit the mayor, who is either a beet or a turnip, or some unholy fusion of both. Mayor Beetnip tallies up your total cashews for that season, then gives you a pile of rewards based on how well you did. Survive four seasons like this, and the fifth season - ‘Nuclear Winter’ - consists of a final boss fight. Survive this, and you’ve finished a run, and unlock a higher level of difficulty for your next go around.

This run to run system is very much of the ‘you get better at the game’ rather than ‘the game gives you ever more powerful permanent shinies’ variety. There are three characters to unlock, and there are also three ants to find and rescue that sell you very minor permanent buffs in exchange for a rare resource, but that’s it for permanent upgrades. This irked me at first, because I am lazy and like the option to brute force difficult challenges, but after a few hours I really didn’t miss it. So much of the variety and enjoyment here comes from collecting different combinations of upgrades that too much permanence would make things stollid and repetitive.

There’s so many of these upgrades and extras available, and so many odd and delightful synergies between them, that it’s best just to describe what I ended up with during a couple of different runs.

There was, for example, the run where I ended up with a near-fully upgraded ‘Parsniper’ rifle, which had a low rate of fire compared to the absolute chaos on screen but which was able to monch through bosses with ease. I also had a horse that let me zip around the map, and an ‘Atomitractor’ AOE special I could drop on clusters of enemies. I had a friendly cow that watered my plants while I was away murdering, and a triple watering can for when I was guarding my patch. This was especially useful, since I also had an upgrade that produced protective, bullet blocking bubbles every time I watered plants. There was also a huge worm that followed me around everywhere, although I never quite managed to work out what it did.

Then there was the run I’d upgraded a huge blunderbuss to fire several massive orbs of incinerating goodness, and married an anthropomorphic rabbit with her own big gun. We stayed together and we slayed together, and also my gun fired squirrels sometimes. I’d found a pair of cleats that let me till soil to seed-ready perfection just by stepping on it, and a healthy pile of magic scrolls that instantly sewed seeds in every tilled patch. I’d also found organic armour - a free health heart that regenerated every day. You begin each run only able to take a handful of hits before the run is over, but you can upgrade your total health by finding more ‘heartbeets’ once your health is full. They’re quite rare, so that armour was a needle in a haystack of less useful upgrades.

It’s also worth mentioning that guns break after a single day. That was another annoyance that started to make sense after I'd got my bearings, and it forces me into playing a bit more strategically, if, say, I knew there was a boss coming up.

So, yes, the difficulty initially felt a bit too steep. And, yes, if you’ve been playing a bunch of Hades recently like I have - where some upgrades can last across multiple runs - then it may feel unsatisfying to more or less start over each time in Atomicrops. In time, it felt refreshing to play something that forced me to become intimately acquainted with it in order to make progress.

My only real major disappointment with Atmomicrops is that the advertised simulation bits turn out only to be a few light nods to the genre. It’s got some simulation-shaped aspects, sure, but they’re flimsy plastic ferns in comparison to the very much alive and dynamic creeper vines of its shooty-dodgy core. This said, the farming does make fighting more interesting simply by providing a worthwhile distraction, leading to almost unbearably chaotic instances of frantic multitasking. As long as you know what you’re getting into, and are up for sewing a few hours of practise in before you reap the rewards, I think it’s well worth your cashews. Which I’ve only just realised are a play on ‘cash’. Ooh.