If you click on a link and make a purchase we may receive a small commission. Read our editorial policy.
Developer: Hermes Interactive
Publisher: Team 17 Digital Ltd.
Release: Out now
On: Windows
From: Steam, GOG, Humble
Price: £11/$15/€15

I was doing it all wrong. My first few hours with Automachef had me proper wound up because, basically, it wasn't Factorio, and thus has different goals.

That's entirely on me, of course. Although a mere glance at Hermes Interactive's new robot kitchen game is enough to make the similarities obvious, Automachef is very much a puzzle game. And it's a bloody good one too.

You run a series of commercial kitchens, at the behest of a cheerful human person who's definitely not a robot bent on destroying humanity. Each is a discrete level with specific goals and conditions, and, particularly in the early levels, very limited equipment. The basic conveyor belts and grabby arms will be familiar to anyone who's played an automated industry sim, and the function of most machines is obvious, thanks to the universal nature of cooking. Dispensers magic up ingredients, and most machines chop or heat in some way, before all the bits meet their friends in an assembler and get smushed into a recognisable meal.

You don't produce endlessly, nor to a quota. Instead, a number of largely unseen customers will order one of your menu items in real time, and you must fulfill their order within a strict time limit. Serve up enough dishes and you'll complete the level, preferably without using too much electricity or wasting a lot of food. 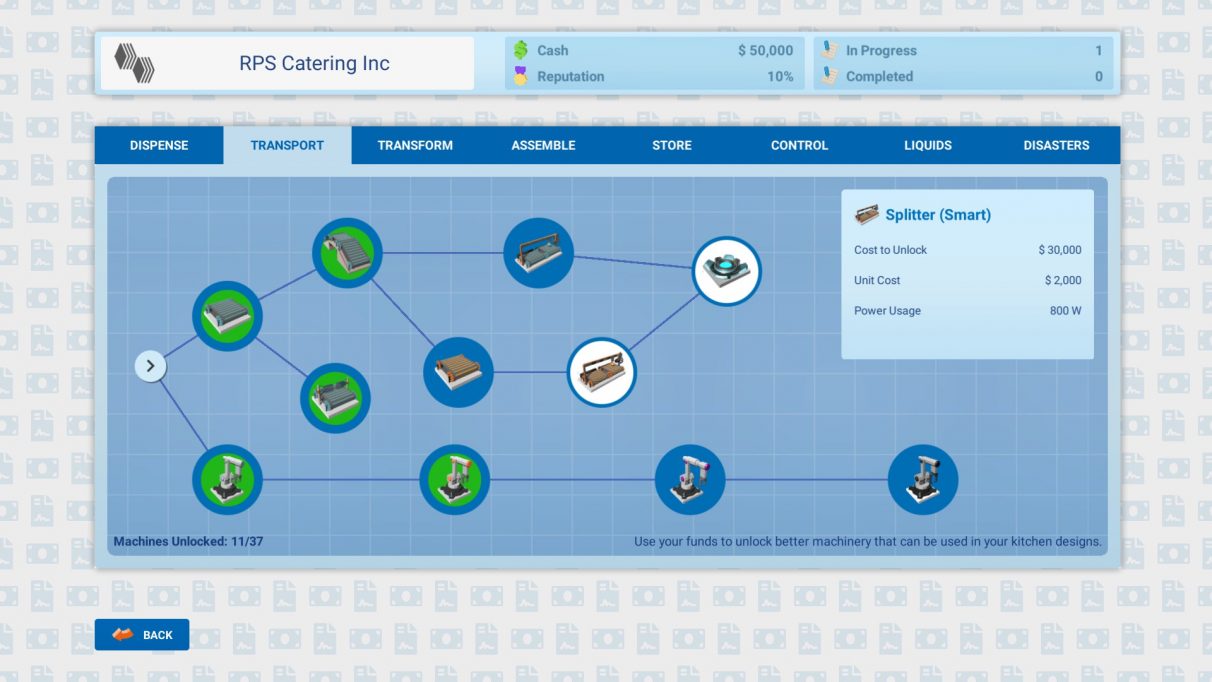 It is surprisingly hard. Even getting the food out in time is a challenge, especially as budget and space is limited. It's hard to explain my initial frustrations with it because they came down to fiddly issues of having to make compromises that in a building game would bother me, but of course, it's a puzzle game. While it's definitely not a single-solution deal, the focus is on fulfilling the requirements of that particular level, even if it means burning far more electricity, or building thrice as many dispensers as you'd like. While they are often similar, each has a different combination of recipes that means you have to redesign production lines from scratch each time.

Let's say a level demands chips, and burgers. There's no overlap between those two. You can make a line producing, chopping, and frying potatoes, and one grilling burgers and putting them in buns. On the next level though, you have cheeseburgers and plain burgers and cheesy chips, which means three lines with overlapping needs. The cheese needs to go through a chopper belt for the cheeseburger but then a second one for the chips. Which also need potatoes to go through one, so you could split some of the cheese off? And how do you fit that into the burger line, which is already splitting burger patties and buns? Now what if the burger needs a sliced tomato too? Do I want two cheese dispensers? Will putting hot dogs on the same grill as the burgers work? Would it be better to use a conveyor grill or a barbecue? The smallest questions matter. 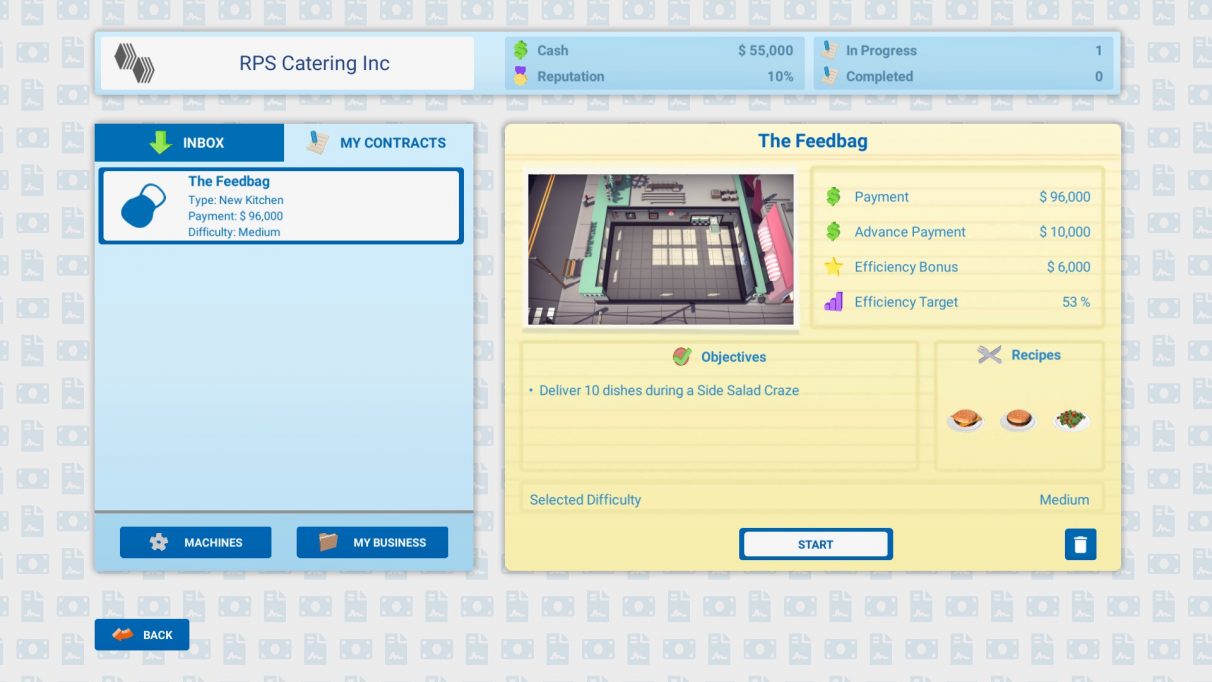 Food spoils incredibly quickly, so your system must be reactive and fast. That's where the order reader machines and computers come in. By default, dispensers produce one item every 5 seconds, which usually means your meal assemblers get overloaded, causing spoiled meals or fires. A backed up line anywhere is fatal, so you can use order reader machines to give instructions to specific machines when a named order comes in - "lettuce dispenser activate once" if a salad is ordered, say. But they can only order four other machines. This bothered me at first. I felt I had too little equipment, and what I had worked within narrow limits.

But your machines are not ideal. Going without is part of the challenge, which primes you to be resourceful and fudge awkward but effective solutions instead of relying on fancier robots to do it for you, so that when those become available you're ready for bigger problems. When I realised that, it became utterly engrossing. It helps that it's low-pressure. The business day starts when you say so, and when that happens you can only watch, or click 'stop' to instantly reset the day when you've spotted a burned hotdog or an over-supplied packaging machine, and go back to editing your setup. You tweak and shuffle and refine your designs to prevent problems rising in the first place, because any slip up will likely be final. 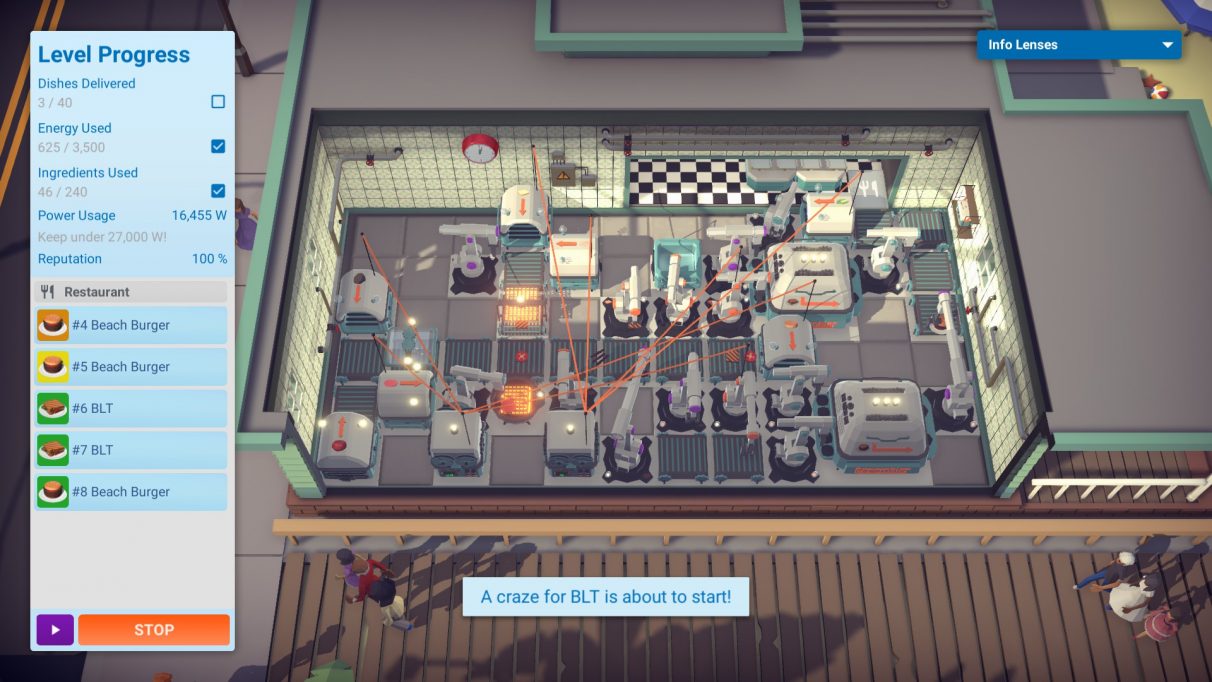 There's an excellent feature that lets you simulate what happens when a specific order comes in. Seeing a prepared salad served from nothing in a few seconds is delightful. You can ctrl-select any number of machines, RTS style, to move and rotate them in a block, and each level offers 5 slots to save layouts so you can experiment but still revert to an earlier design. There are thirty main levels, but you could be scrutinising some of your kitchens for hours to get that wastage problem pinned down or come in under budget, especially in the career mode, in which you select catering contracts for pay, and unlock more machines in a somewhat Kerbal-esque manner. 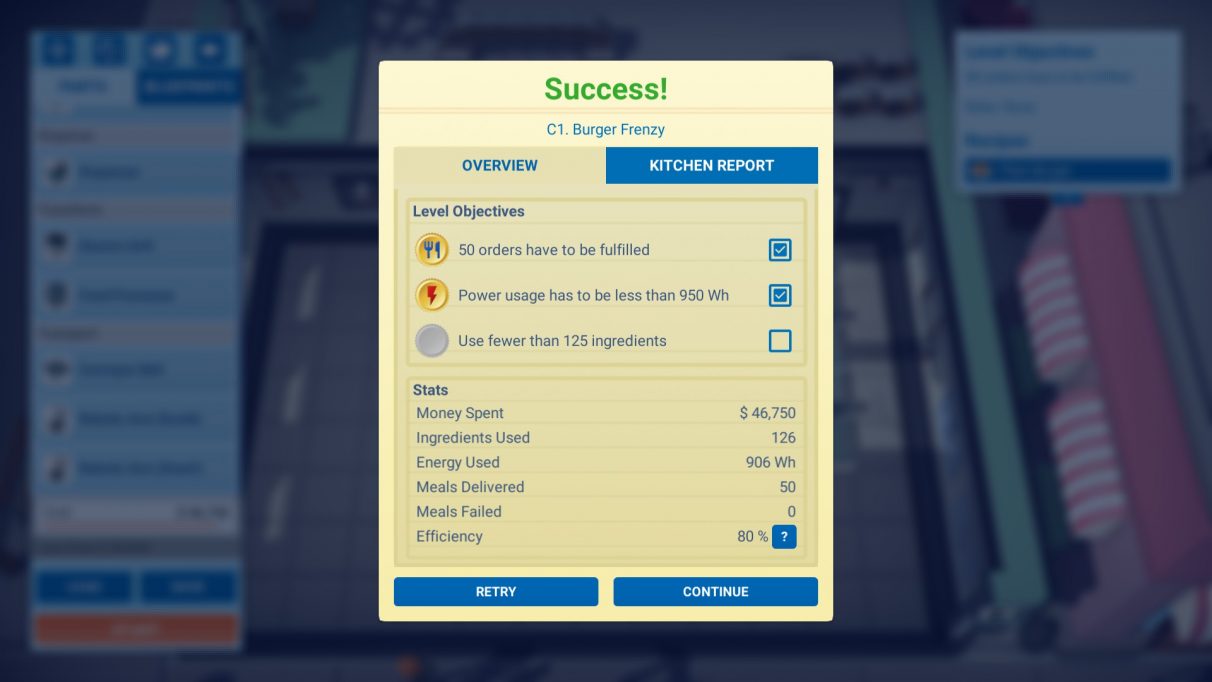 There are some minor UI issues - there's far too much needless scrolling in some of the ingredient menus, and the text for machines gives somewhat inconsistent details (and no explanations at all for unfamiliar machines in career mode - what's "advanced" about an advanced assembler?). Its music alternates between charming me enough to bob along, and annoying me so much I have to switch it off. But that may simply be a reflection of where I'm at with a level at the time. When I'm racking my brains trying to split the right amount of bread off a grill without having to reorganise the entire level, the music does my head in, but when the machines are working smoothly I feel proud enough to cheer and briefly stop moaning at everyone.

I initially bounced off it but that was entirely my fault. Automachef is a great little thing when you adjust to its rhythms, and it's entirely to blame for my abysmal lunch habits.