My stint as the governor of an off-world colony has gone a bit pear-shaped. I’ve got aliens to worry about, toxic fumes are floating in from the east, lightning has set fire to my farms and shards are falling from the heavens, smashing into my vulnerable habitats. If that’s not enough of a pain in the arse, protesters have taken to the streets, complete with massive holographic slogans. Playing Aven Colony [official site] is like trying to make a house of cards next to an open window.

Mothership Entertainment’s colony management sim looks a lot like the sci-fi entries in the Anno series, but with its elections, edicts and simplified economy, it’s got more in common with a Tropico where the humour and Caribbean charm has been replaced by a multitude of crises that make Banished seem almost relaxing. 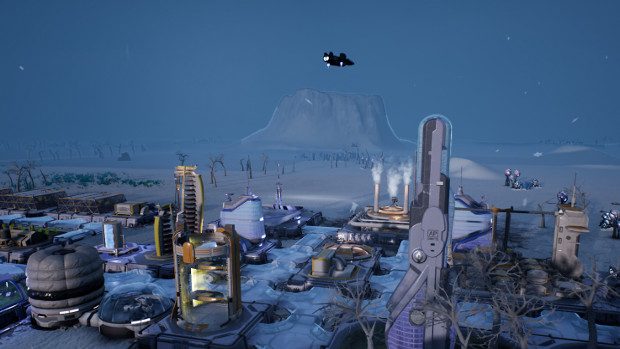 It doesn’t start out that way, mind. Whether you’re building a colony in one of the game’s increasingly challenging missions, or in the sandbox mode, you begin by going through the motions. You need to construct buildings that generate power and water, farms to feed colonists and habitats to house your citizens. So far, so familiar. And in case you forget to do any of this, the game reminds you by turning these building projects into objectives. The same ones, every time.

Then winter arrives. Winter, it seems, is almost always impending, and it’s a marvel that the entire world of Aven Prime isn’t constantly hidden under miles of ice and snow. It means you have to temporarily bid farewell to solar power and farms, which is unfortunate because you’ll be very much relying on them. It’s possible to plan for this, the worst season, however. Geothermal and wind power is still effective, and greenhouses can ensure that crops continue to grow even when it’s freezing. But it’s still a balancing act. Geothermal power stations can only be built over vents, wind power is weak, and greenhouses contain fewer crops and need more electricity. 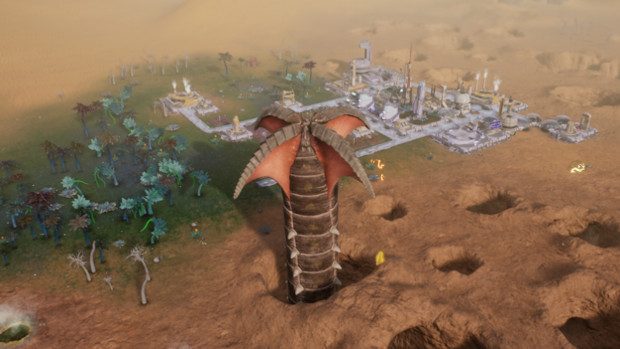 While many of its counterparts use the desire for prosperity to drive expansion, Aven Colony uses the need to survive. Every crisis requires a new building, which requires more power, which requires more workers. It means you always have to be switched on and ready to douse yet another fire, both literal and figurative. It’s got a tension that’s unusual for the genre, but while it certainly makes the game more challenging, it definitely doesn’t make it more fun.

Mariina Hallikainen, Colossal Order’s CEO, once told me that the least popular bit of DLC for Cities Skylines is the Natural Disasters DLC. Players with fond memories of demolishing towns in SimCity demanded it, but it turns out that most people want their cities to remain standing. After a week with Aven Colony, I'd be happy with just getting a break from all the repairs.

It’s the constant busywork that tires me out. Rather than worrying about a single, huge disaster, I’m fretting about a dozen smaller ones that repeat ad nauseum. And rather than smartly planning out my colony and passing laws to improve it, I’m doing damage control, simply reacting to whatever nagging problem is giving me a headache. And it’s never over. Issues are never really solved; they’re just survived until the next time. 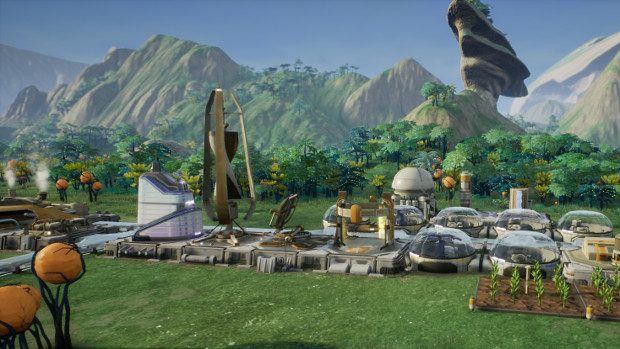 I can’t understate how quickly it can all go down the shitter, either, especially during an election. You can be sitting pretty at 90 percent approval one minute, and all it takes is for power to briefly go out for that number to plummet to 30, ending the game. Aven Colony’s colonists aren’t just quick to turn on their leader, they’re incredibly lazy too. If they have to walk more than a few blocks to get to work, for instance, they’ll get depressed about their commute, and since there’s no transport system and only one type of road, there’s nothing that can be done about that aside from building more, potentially unnecessary, residences closer to their job.

The whole endeavour is, ultimately, Sisyphean. Each “victory” in the campaign is merely a doorway to another trial that’s broadly identical to the last. Occasionally a new mission will add another obstacle, or the map will lack specific resources, but the majority of objectives and roadblocks repeat so that it doesn’t feel like you’re making any progress. Not meaningful progress, anyway. There’s a tacked-on narrative running through the campaign that crops up from time to time, mostly in the form of commands tasking you with expanding your colony to a particular location. It’s a sophomoric sci-fi mystery involving a bunch of people you don’t know talking at you through a future version of Skype called, I kid you not, Shipe. It’s joined by Cmail and a Twitter analogue called… Twotter? Twatter? It’s something terrible, anyway. 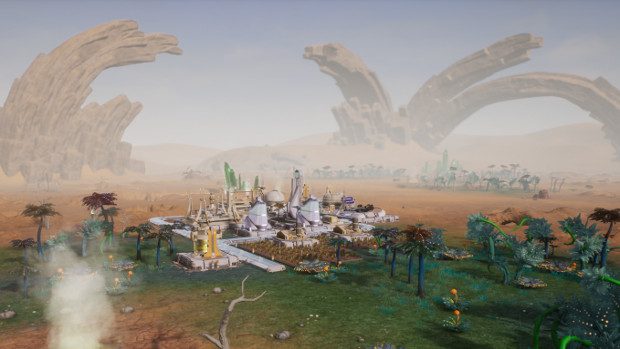 Underneath all the relentless catastrophes are the foundations of a mostly competent management game. It’s got all the basics, the fretting about utilities, resource gathering, fulfilling colonists’ needs and desires, plus plenty of overlays and stats to track everything from air quality to how free colonists feel (not very if you’re fond of instituting martial law). Some of the information, air quality in particular, could be expressed better, but everything’s generally clear and rational.

It’s a bit rigid, especially in the campaign, where there’s generally a single right way to develop your colony, but once you start plonking down advanced buildings like research centres there’s a bit more room for experimentation. Inedible alien flora, for example, can be cultivated just like crops, but on their own they’re worthless. With the right buildings and tech, however, they can be combined with other plants, water or flour to create a new resource. This way you can discover new ways to stop your colonists from starving, and you can keep them stocked up on drugs that will make them too relaxed to complain or riot.

I’ve grown to cherish the moments between the storms and the invasions of alien, plague-carrying spores, when I can tend to my farms and concoct strange new narcotics. But it’s also during those moments of calm where it becomes more apparent that the simulation layer is a little lacking. 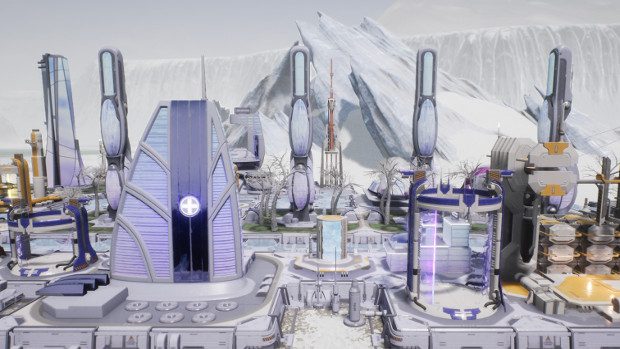 Colonists, for instance, all seem to act identically. Every colonist can do every job and live anywhere, as long as they can get to that aforementioned job. And that’s their entire life, aside from brief breaks where they protest their benevolent ruler. There aren’t family units, classes, different ages, education and there’s no social mobility, either. They are merely a bunch of walking lists of the same needs, and the only reason you need to fulfill those needs is to make sure they keep working and re-elect you. It’s all about maintaining the status quo, rather than improving the colonist’s lives so that they, in turn, improve the colony.

This results, unfortunately, in colonies that feel incredibly artificial. Take upgrading homes. In, say, Anno 2070 or Pharaoh, once the needs of a house’s residents are met, the building and its inhabitants are upgraded. There’s a physical transformation, and the buildings can fit more people, but more importantly the homeowners become better off, climbing up the social ladder and taking new jobs. It’s an expression of the positive changes you’re making to the settlement. In Aven Colony, you spend nanites, the game’s version of cash, to upgrade buildings, and the colonists don’t play a role in it at all. 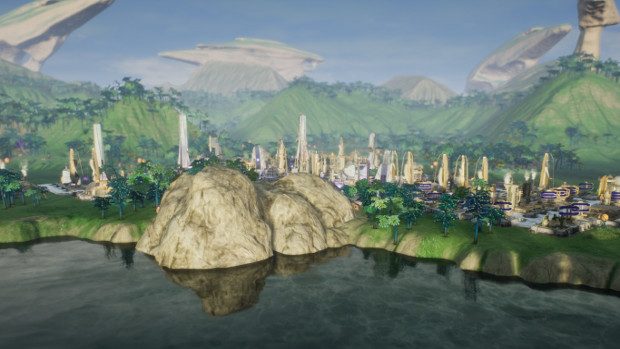 It’s appropriate that Aven Colony doesn’t use regular currency, because the economic side of things is largely overlooked. There are no taxes, no budgets to worry about, a complete absence of my beloved economic sliders, and only the pale reflection of a trading system – it leaves a gaping hole in the game. Instead, nanites are synthesised from exhaustible supplies of copper and iron, or some alien sludge, and they can be spent on buildings, consumer goods, upgrades and the occasional trade deal. And… that’s it. That’s the extent of the game’s economy.

As much as I crave a deeper simulation, I’ll concede that it might be a bit too much to manage in conjunction with all the threats the colonies face, but dealing with vast green clouds of deadly gas is, surprisingly, a lot less compelling than balancing a budget. One involves experimenting, tweaking, making sacrifices and planning for the future; the other involves making sure you’ve got a giant fan.

In the sandbox mode, where you can tone down the frequency of many of the threats to the colony, the streamlining is even more noticeable. Nonetheless, it’s a more pleasant experience, absent the shackles of the more linear campaign and its accompanying busywork. But by the time I was finished with the missions, I was already burned out. 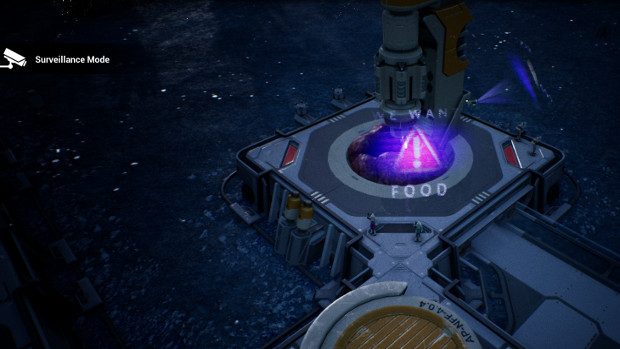 Improvement though it may be, it’s still more of the same, including the maps and their accompanying challenges, which are all taken from the campaign. There’s nothing in the mode that really encourages creativity, either. There are no cosmetic items to spruce up the colony because it’s all function over form, and no opportunities for the emergent storytelling that you see in other sims and city-builders. It’s a cycle of survival and expansion, but not much else. Once things start going smoothly, it's hard to find a reason to keep on going.

I don't think Aven Colony is terrible, despite these 1,500+ scathing words. The combination of survival and constructing a frontier colony is still an intriguing concept, and Mothership Entertainment have used the alien world conceit to create some novel, if ultimately irritating, obstacles. But the balance is all off, and its slog of a campaign and the attempts at streamlining make this a disappointing extraterrestrial outing.

Aven Colony is out today on Windows via Steam and Humble for £25/$30.