If you click on a link and make a purchase we may receive a small commission. Read our editorial policy.
Baldur's Gate 3 early access review
The first act of Larian's revival of the legendary RPG series has a lot to recommend it. Enough, in fact, that you may want to wait for the full thing to experience it in one go.

Baldur’s Gate III early access is a devil’s bargain: a cure for impatience, but at what cost? You can say that of any ‘pre-release’ release, but it feels apt here, given that act one of Larian’s epic RPG and Dungeons & Dragons revival is a trip through temptation country. There’s a Mind Flayer tadpole burrowing into your skull and an assorted cast of druids, healers, zealots and demons all promising to kiss and make it better. Many will make it worse - oh god, so much worse - but what’s early access for if not discovering what works and what doesn’t? The aim is to un-bug your brain as Larian debugs the game.

Larian pitches early access as a chance to dig into the guts and help iterate over the next however many months. I suspect many just want to peek at what they’ve done with the series. It was obvious early on that this wasn’t going to be an Infinity Engine tribute act, a la Pillars Of Eternity. But neither is it just Original Sin 3 (one of the more tiresome sneers, given that a D:OS3 would fundamentally be a welcome thing). Instead, it appears Larian approached the 5th Edition D&D rules in the spirit BioWare approached Advanced D&D 2nd Edition. Both ask ‘how to make dice sexy on screen?’ They simply reached different answers. 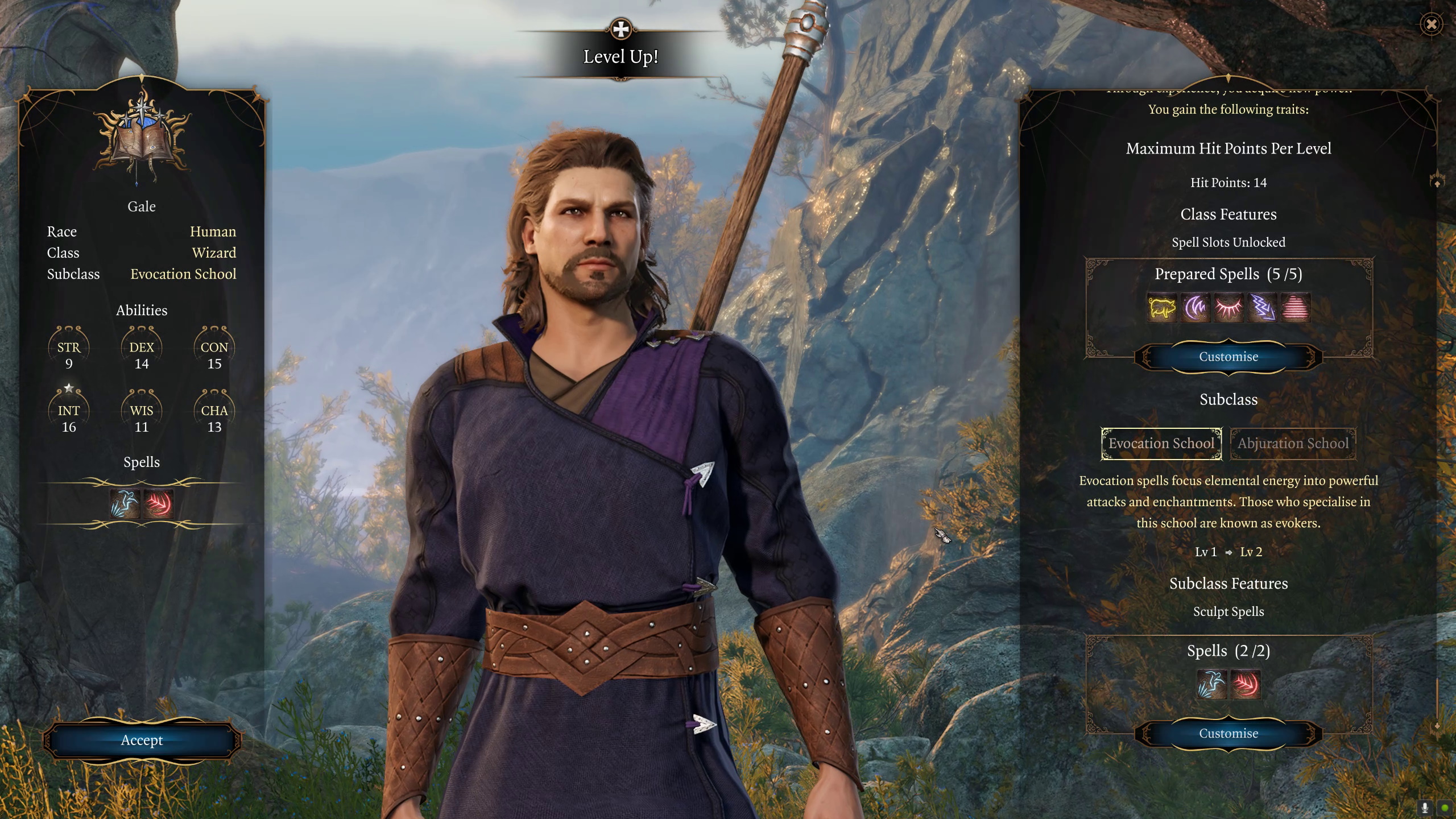 But let’s put that aside for a moment and talk about a wizard who might also be a bomb. His name is Gale and despite being the friendliest ally in these early hours - not stiff competition, considering another sees my neck as his bedtime drink - there is something off about him. A lucky dialogue dice roll (which are shown on screen for some clenched jaw excitement) earns a glimpse of inner turmoil and a stern threat to never pry again. He also seems to have bigger fish to fry than his cranial companion. And, in the real giveaway, when he dies in combat, his ghost pops up to beg for revival, lest his corpse cause some unknown catastrophe.

This is when BG3 dug its claws in, as Gale’s panicked spirit outlined a resurrection protocol that pulls the game into Keep Talking And Nobody Explodes territory. (In hindsight, ‘keep talking and nobody explodes’ is pretty good advice for most encounters here.) It’s immediate drama, which wasn’t Larian’s strong suit in Original Sin. There were plenty of dramatic goings on, sure, but the narration and your physical distance from the world’s minutiae meant they tended to tell rather than show. Yanked from your isometric perch, in BG3 you can enjoy digital puppets selling exemplary voice work. Larian write great characters and this style serves them better.

Cinematic razzmatazz drags Baldur’s Gate 3 much closer to BioWare’s games. Less so Baldur’s Gate, than Dragon Age and Mass Effect. Watching a bitter cleric grimace at rival faiths, or a bard clang her way through a mangled ditty, is full of humanising surface details. And the camp, where you snooze back health and spell slots, is basically lifted from Dragon Age: Origins; a place to put the moves on a romantic interest or nose into backstories. Even in these early hours it grows with characters saved during side missions and unexpected intruders. I do worry it means we won’t get inns with a banging recorder theme, but there’s time for that yet.

Where it channels Baldur’s Gate 2’s flavour more explicitly is in the tension within the party. There it came from the toil the previous adventures had taken; here it’s that killer brain bomb hook. Every companion has skin in the game, namely the skin that will shred when a tentacle monster erupts in seven days. The potential solutions are many and no one agrees on the best course of action. But Larian then slather this in complications: the vampire spawn’s feeling parched, the Githyanki is zealously bound to purge the illithid threat and Gale, er, wants to… eat magic artefacts? (A fantastic notion that turns every juicy bit of loot into an argument.) 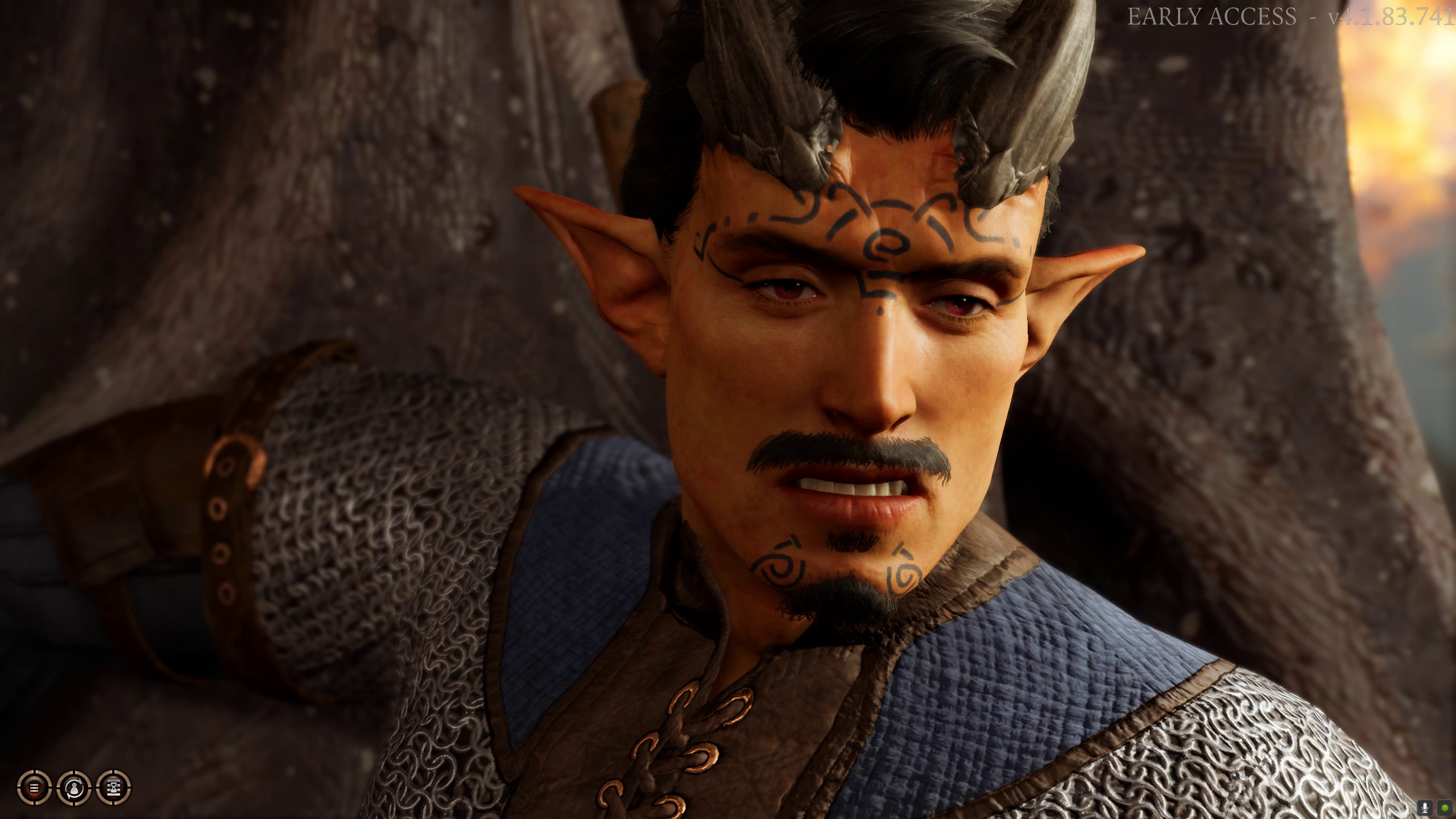 On top of this there’s world events designed to strain the group on racial grounds or philosophical differences. Entire societies can be purged or saved, or modified in impressively granular fashion. It’s ruthless, too. When I leant too heavily on using the mind maggot to supernaturally boost my persuasive powers I returned to find the camp in uproar and saw my first slain companion on the floor. Larian’s estimated 20 hours of playtime may get through act one once, but it’ll be a very different act one to mine. The idea of these decisions snowballing along the road to Baldur’s Gate is thrilling, and maybe a reason to hold off for now. You’ll want to see more.

Celebrating traditional storytelling techniques may sound odd when Larian are rightfully famed for their systemic mechanics and innovations in turn-based combat, and how those smash the norms of conservative RPGs. Do not get me wrong: Baldur’s Gate 3 definitely builds on that framework, but also trims it down in a few places. 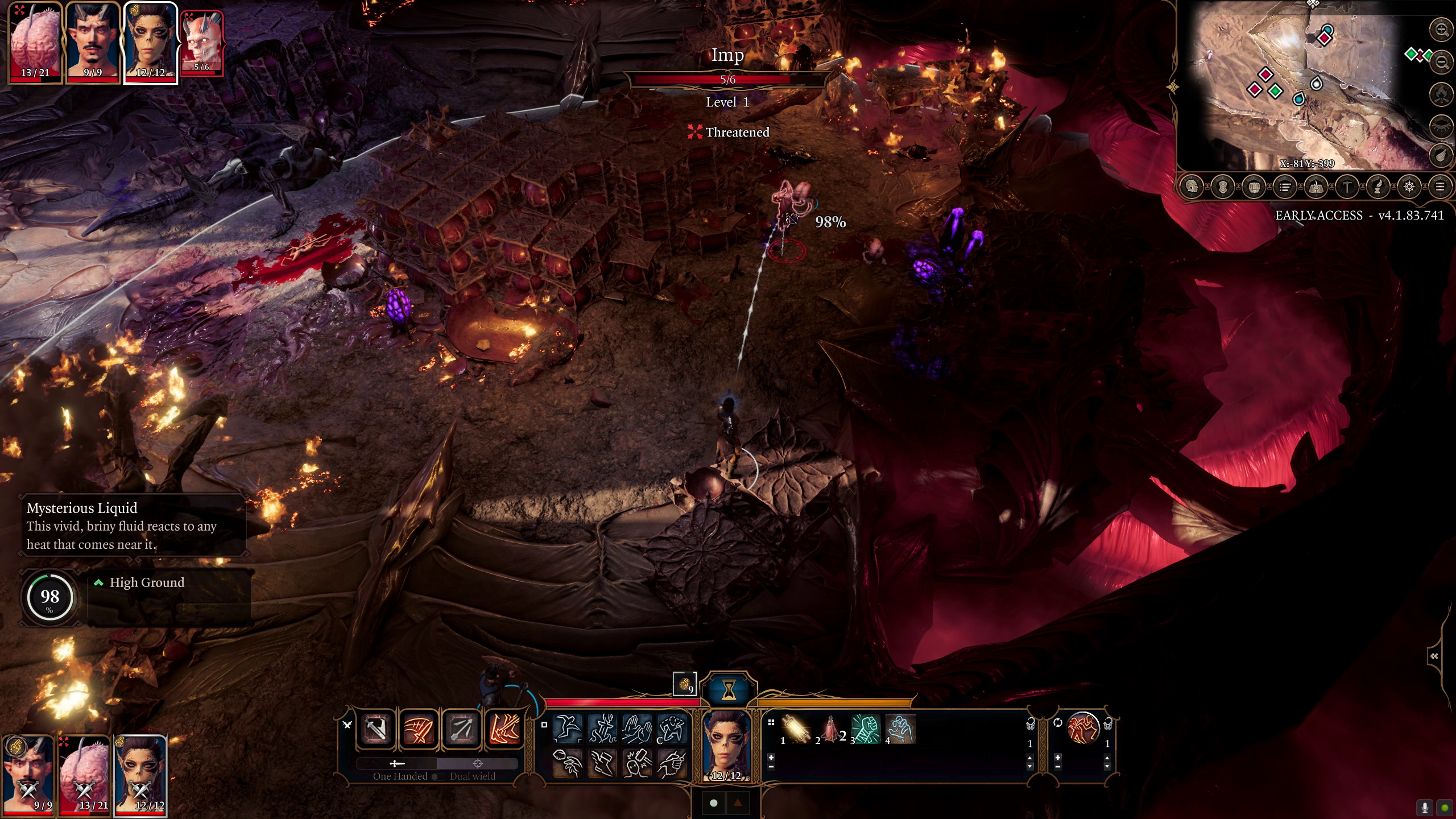 The fixed D&D classes - six of an eventual 12 are in early access - aren’t as flexible as Original Sin’s pick ‘n’ mix of magics and abilities. Clear roles in battle mean fighters can feel limited compared to spellflingers and don’t obviously lend themselves to DOS2’s absurd combos, at least in early access’s lower levels. This is also partly due to less emphasis on elemental interplay. You can still crack oil barrels and ignite the puddle, say, but the arenas aren’t the same patchwork quilts of bubbling poisons and electrified steam unless you really set your heart on trying to bring that about. If anything, there are fewer instances with greater variety; bespoke obstacles that help separate one brawl from the next.

Likewise, the distinction between actions, bonus actions and movement, and the role of height and positioning to gain accuracy advantage, is more rigid than DOS2. But that urge to squeeze more from fewer actions requires better spatial awareness than I needed in Larian’s earlier game. If this can keep Baldur’s Gate 3 from falling into DOS2’s endless cycle of hoarding action points and stalling enemies - aka: knock down moves or GTFO - it should keep a lot more of the vast movelist in play. And, yes: there’s no magical/physical armour shenanigans to limit your imagination here. Just the good old fashioned armour class and a roll of the dice. 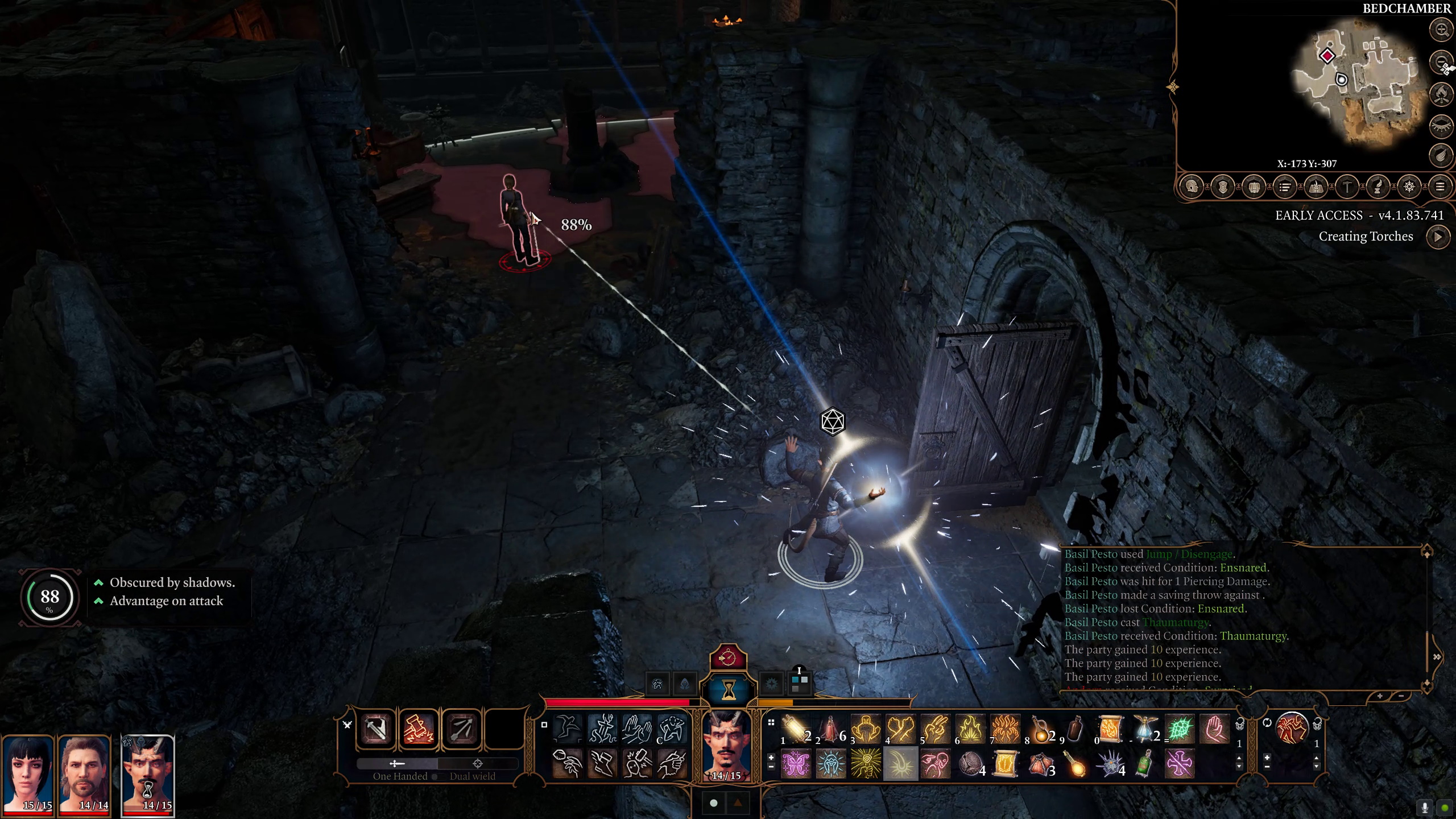 Where Larian do expand, it's in the name of D&D fidelity. This is a huge rulebook of weird, bespoke mechanics, and the solution is to fill the game with weird, bespoke mechanics. There are spells with submenus to tailor their effects. There are unique HUD elements measuring one class’s divine power and another’s stock of special stabbing dice. There’s a scrolling list of potential reactions to dictate behaviour out of turn. I understand maybe 75% of it, the rest obscured behind wording lifted straight from the rulebook, but hard to parse without a glossary. It could almost do with the tooltips recently seen in Crusader Kings 3. I’m particularly flummoxed by social magics that influence ability or skill checks. How and when should they be applied? If they are exerting any influence, I’ve yet to really sense it.

With a lot of its ideas, you see that Original Sin and D&D were already on the same page to begin with. An amulet that lets you speak to the dead, albeit only for five questions - a mercy given the pained, rasping truths you extract from them. Or spells to talk to animals, and another that masks your body, a la Fane’s face ripper. These are not comic asides, but avenues of investigation to worm through quests in unusual ways. 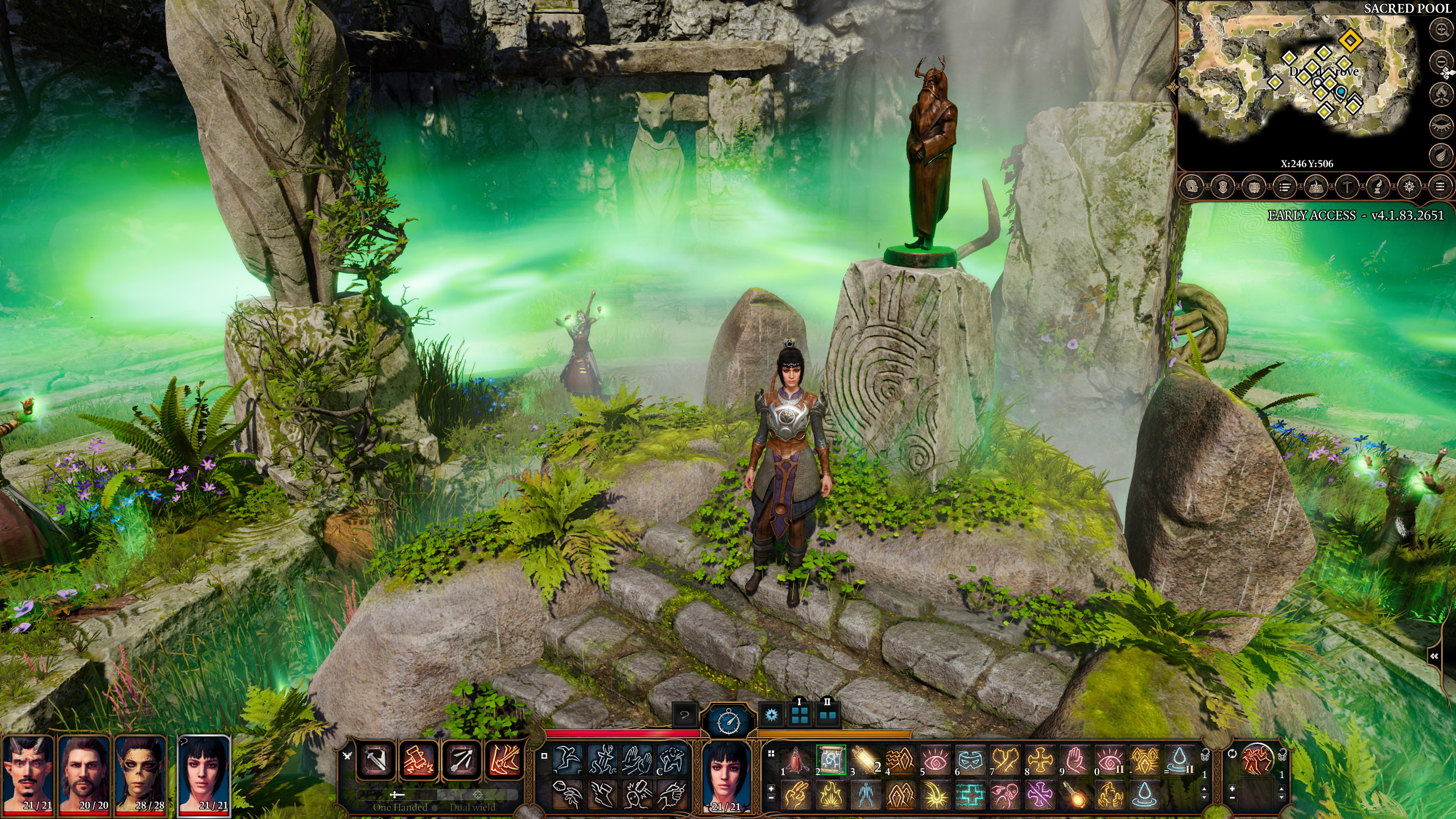 And it builds brilliantly on DOS2’s stealth systems. It takes the returning vision cones and adds areas of light and dark (yes, you can snuff out candles) and illusionary magics that distract guards, to make sneaking - and your rogue class - more useful and viable than they’ve been in any RPG before. Combine this with new throw and shoving actions and the potential for mischief is vast. When I failed to intimidate my way into an occupied chapel I managed to crack a hole in the roof, jump down, maneuver a smokepowder barrel behind six bandits watching the door and evaporate the gang with one fireball scroll. As the kids would say: chefkiss.gif.

As you can probably gauge, there’s a vast amount of ground to cover here, and a vast chunk of time for that ground to evolve in early access. I haven’t even told you about the thrill of the on-screen dice rolls that send the story zooming off in different directions, and will make this a thrilling spectator sport on Twitch. I’ve not tested the multiplayer, where party politics and individual agendas are lived in real time. I didn’t even dig into the goblin palace so rammed with storytelling and stealth that navigating it felt more like a Hitman stage than anything I’ve seen in an RPG before. And it’s but a corner of act one’s map. 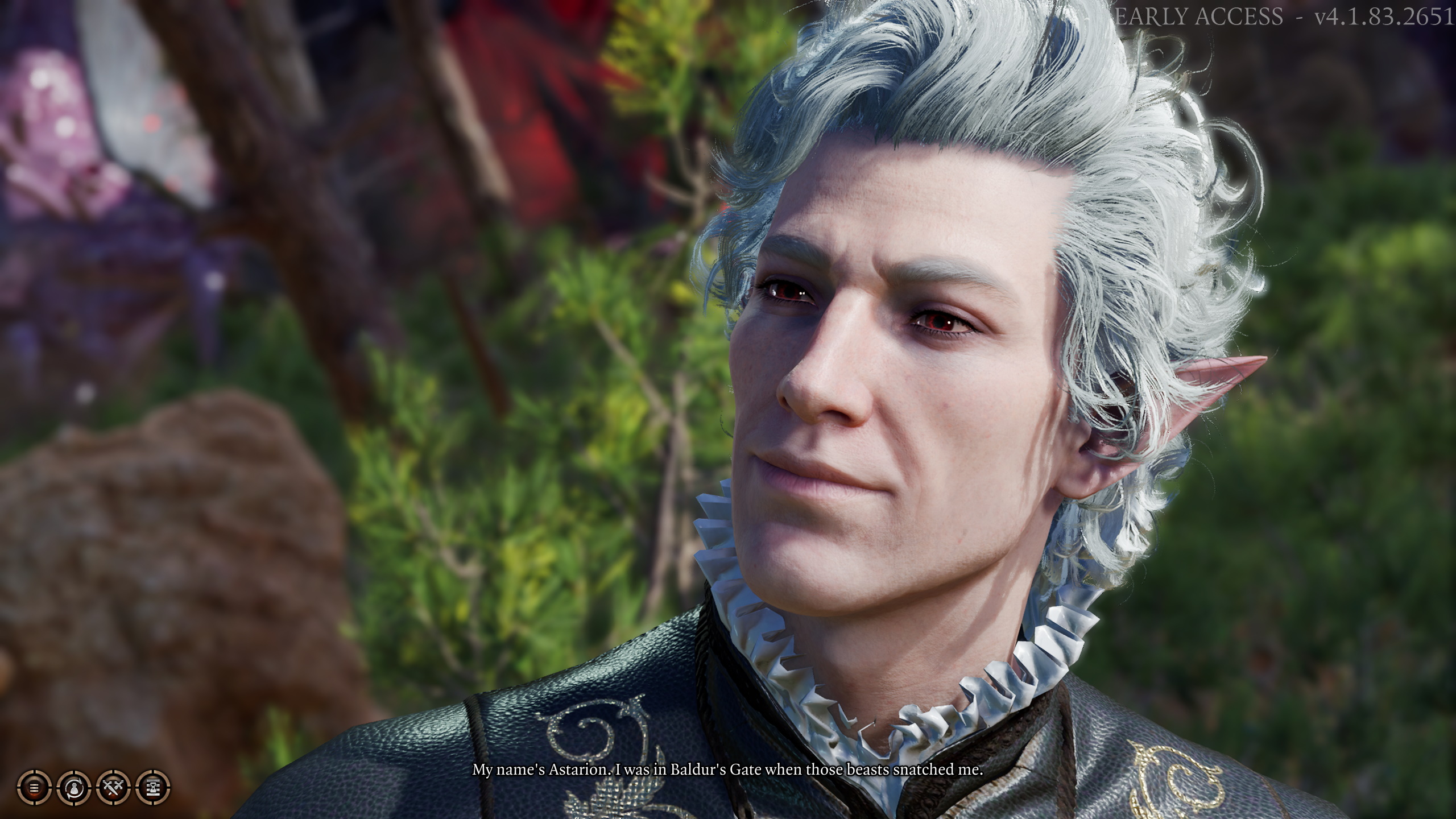 As a thing to fill time and tickle your brain, Baldur’s Gate 3 early access is a meaty thing. Definitely more filling than the Fort Joy area of Original Sin 2’s early access chunk. Technically, I found it stable, with more egregious evidence of its early status limited to wonky animation transitions and words emanating from closed gobs. At one point a man appeared as a bear, but only in cutscenes. Is that a bug or a feature? I’m not hot on my D&D lore. I also triggered a 26-person battle across an entire settlement which caused the AI to go into minor meltdown, taking up to a minute to work out individual NPC moves, resulting in a painful sight of a 10 minute war as 20 tieflings struggled to murder one remaining halfling. But so it goes - and there's already been an update to fix some issues.

No, my word of warning goes instead to those who simply want to enjoy the story. By dint of being a first act it threatens to be all dilemma and no consequence. There are immediate consequences - big, messy, reach-for-the-quick-load consequences - but know that the meat of your mulling won’t be answered for some time. If it were not for this job, and having the self-control of four year old at a birthday party (or games journalist presented with a plate of miniburgers at a press event), I would would want to see this enticing story play out in full. Don’t feel pressured to gather your party and venture forth, but based on what I’ve seen, I think that party is in for one hell of a ride when they do.

Disclosure: Adam Smith used to work here, but is now a writer at Larian and works on Baldur's Gate III. Not that we care, psh.