It's safe to say you've played few games like Beckett. A multimedia collage piece about futility and hopelessness, it's utterly fascinating in many ways. To call it a visual novel is to suggest far too many ideas that aren't relevant here, so let's instead call it a "narrative experience". Parts Kafkaesque, parts Lynchian, parts bad sixth form poetry, it's really quite something.

Of course, being artful and avant garde is something games too often lack. However, loudly announcing from a ten foot megaphone atop a self-constructed mountain how arty and interesting you are is really not lacking. So it's unfortunate that no matter what game is to come after Beckett's beginning, it will never not be a game that had the following on its options screen:

This is the tale of a maybe-PI, Beckett, an aging man who seems loose in time, reality, hope. Ostensibly focusing on a case he reluctantly takes to track down a missing son, Beckett is an exploration of pessimistic collapse, of degrading reality and crumbling potential. Literary, and literately influenced, it grabs hold of themes from Dada, Kafka, and of course Beckett, and many others beside that I'm far to thinly read to confidently claim.

The game is seen top-down, Beckett represented as a crude black-and-white photograph in a circle, the camera tracking and zooming around as if the world is viewed on microfiche. Simple thoughts appear as text in random places on the screen, "Odd" suddenly written in three or four places across Beckett's apartment as he notices the letter pushed under the front door. Lengthier descriptions are white text in black boxes, black text in white boxes, stamped onto the screen at unjaunty angles. Dialogue is replaced with ghastly sounds, Beckett voiced purely in drab coughs, other characters given parodic grunts and lip-smacks to underline and undermine their character.

I absolutely adore the aesthetic. These grimy photo collages, sometimes with looping ancient photo reel barely visibly projected over the scene. The distorted photographs, faces grimly removed, stretched and pained. The presence of bugs, everywhere, both literal and metaphorical, often at the same time. And yet every now and then it seems to take the easiest route: throw out an on-the-nose description of a lost love, and then scrawl the words, "DO YOU REMEMBER ME?" all over the screen.

The gravitas of the game is somewhat further lost when it throws up lines like, "His nails need cut." Then again there are far more frequently amazing lines in there, like, "Their heads gently touched and Beckett misunderstood Amy's deep sorrow for love."

And that really sums up Beckett for me. It flip-flops from caustic originality to trite cliche in a way that kept tripping me up. One moment you're watching a cacophony of multimedia collage that bombards you with Kafka-esque unsettlingly recognisable horror, the next you're looking at a photograph of an alleyway while inane drivel like "WHY AM I HERE?" appears all over the screen like a first year film student's first go on Final Cut Pro. Sometimes it's Eraserhead, sometimes - albeit much less often - it's Eraserhead watched with a prat loudly "explaining" it to you. It certainly spends much more time in the former camp, thank goodness, but it only makes the latter more invasive.

I love that in a market, shoppers are represented by grubby old coins, stood by a meat stall selling rotting flesh. I hate that in the market, it denounces capitalism like a sixth former, decrying that products "cost more than they're worth", while writing the word "obsession" all over the screen. Come on, too easy.

I adore it for its nihilism. I squirm at its interrupting sophistry. But as quickly as it's pushed me out, it pulls me back. Exploring the corridors of a hospital, looking in each room revealing a piece of obscure archive footage, shaky images of a finger pointing at a skull, a needle being injected into an eye, a man in a labcoat poking at what looks like a dead baby hippopotamus suspended from some bizarre apparatus. Awful, fascinating. Exploring a building site, I'm speaking to foul-mouthed workers represented as hard-hat-shelled crabs, speaking in hammers, negotiating my way to be able to fall down a sinkhole. 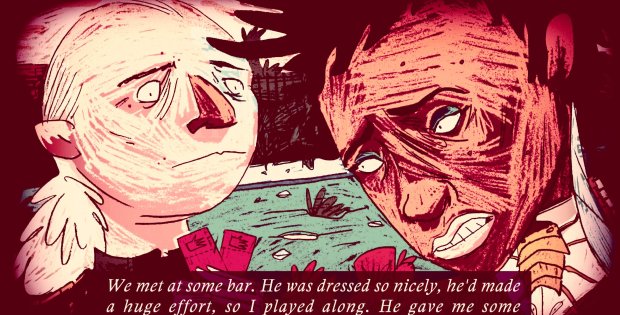 It's constantly original, presenting its text and collage, lithograph and photograph, in novel ways. It's unlike anything else you've played. It's uncompromising, in its uninterestedly displayed dead animals, nudity presented as emptiness, videos of insect births played under morbid texts on death and failure. And, bearing all this in mind, in many ways it's a love story.

It's stuck with me, it invaded my dreams last night, it's impactful like a knife tip is impactful. It's inescapable that at times it's sophomoric, but it's worth it for the more pervasive disturbia that ultimately rules.