The BenQ EX3200R has possibly the weirdest combination of monitor specs I've seen in quite some time. It's a giant 31.5in screen with a big-ass stand and 1800mm curvature radius, so it sits right up in your grill and encompasses a large part of your overall vision, yet it's only got a 1920x1080 resolution.

1920x1080, spread across a 31.5in screen! That's like having your phone's font size set to 512. A resolution like that is downright preposterous on a monitor this big, and at first glance I thought it couldn't possibly be best gaming monitor material in the slightest. And yet, it's probably one of the only ways you're going to get a screen at this size with a 144Hz refresh rate and AMD FreeSync support - all for just £315 / $430 to boot. Can it possibly be worth it? Let's take a look.

Credit where it's due, the EX3200R looks and feels a lot more premium than its mid-range-ish price might otherwise imply. Its glossy metal feet, flexible stand, smallish bezels and clean, elegant curves are a world away from the gamery design school of other 144Hz monitors out there, such as the Acer Predator XB241H and MSI Optix MPG27CQ, and it's definitely not something you'd be embarrassed to have on your desk.

Well, you might feel a bit sheepish once you clap eyes on what 1920x1080 looks like spread across a 32in display, but hey, if you're the kind of person who prefers seeing everything blown up by 500%, this, my friend, is very much the monitor for you. 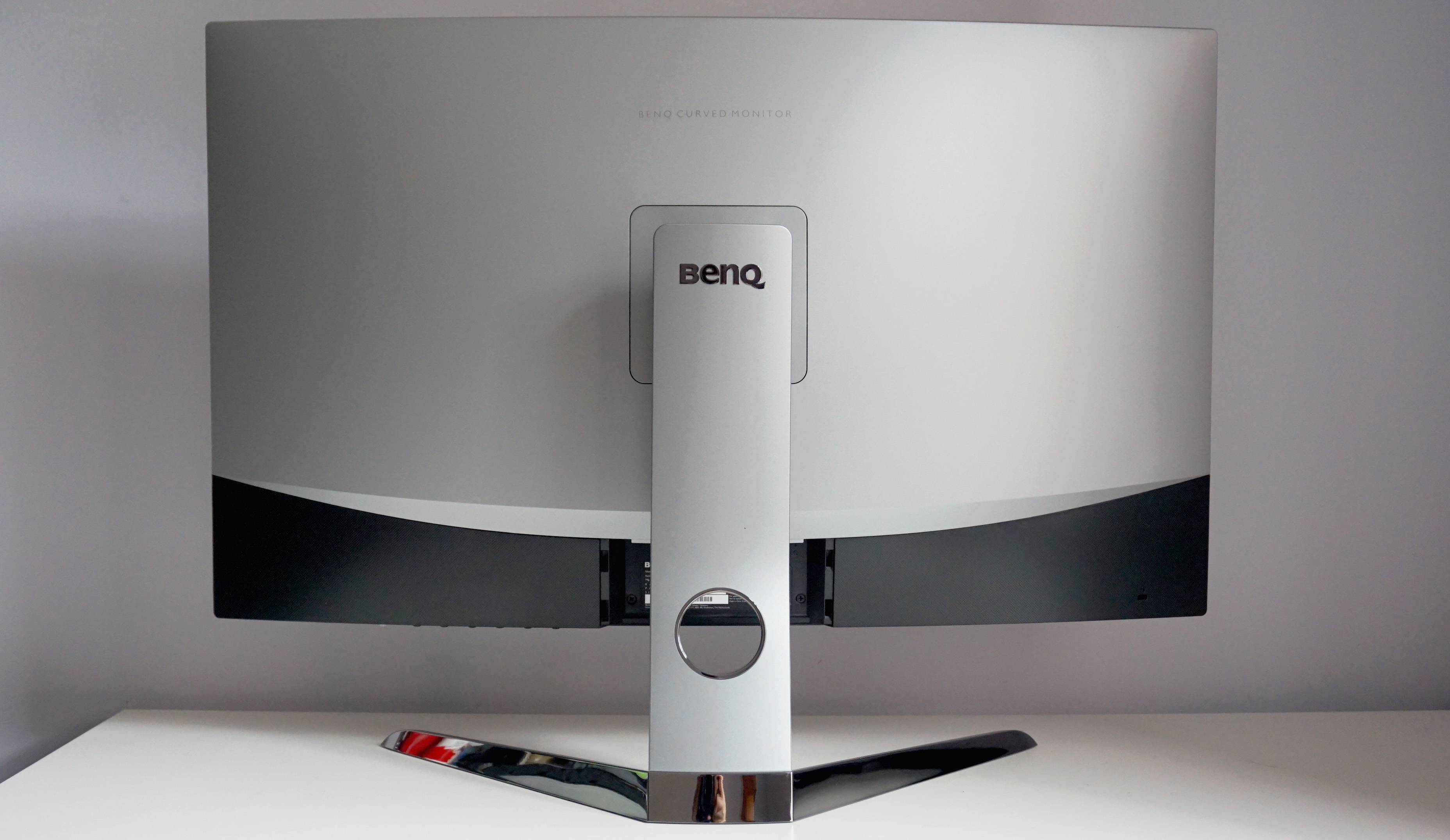 Personally, I get a bit antsy whenever I see a 27in monitor with a 1920x1080 resolution, as I find that even at that size a screen's pixel density just isn't sharp enough for comfortable, everyday use. Stretch the same number of pixels across 31.5in, and naturally it's going to look even worse. Indeed, text looks visibly fuzzy round the edges, images look blurry and compressed, and I constantly felt like I needed to get my eyes checked.

Don't get me wrong, I have nothing against 1920x1080 when it's on the right size screen. 24in displays are absolutely perfect for it. But really, if you're after anything bigger than 27in, I'd implore you to get one that's at least 2560x1440 - and if you're thinking about something in the 32in region, then ideally you should be looking at 4K.

Of course, more pixels usually means forking out a lot more money for them, which is a big reason why the EX3200R looks so attractive on paper - it's a big screen for not much cash. And I do have to admit that, while I probably wouldn't want to use this as an everyday PC screen, there is something to be said for playing games in such weird ginormo-vision - especially when they're whizzing past your eyeballs at 144fps.

Whatever game I loaded up, I felt immediately immersed in that world and what I was playing, and the pixel density issue wasn't quite as noticeable as it was when I was just doing general desktop tasks. There were some games, though, such as Doom, where 144fps was just too much for me at that kind of proximity - both in terms of how close I was to it because of its deep stand and how big everything looked - and it actually made me feel a bit nauseous. Maybe I'm just too old and decrepit for 144fps now - at least in fast-paced games - but unless you have a particularly giant desk to stick this thing on, the EX3200R can sometimes be a touch overwhelming.

The quality of the screen itself isn't that impressive, either. Like many other curved screens I've seen recently, BenQ have put a VA panel in the EX3200R, but its colour accuracy leaves something to be desired. No matter which of its nine colour profiles I picked - including its two tweakable Custom modes - I couldn't get its sRGB colour gamut coverage to go any higher than 89.6%.

It looks decent enough in the flesh, but it's far from the best sRGB coverage I've seen from this type of screen panel technology (see our monitor buying guide for more info on all the different panel types), and doesn't do much to help persuade me that, yes, this really might be worth the bargain it's trying so desperately hard to be. 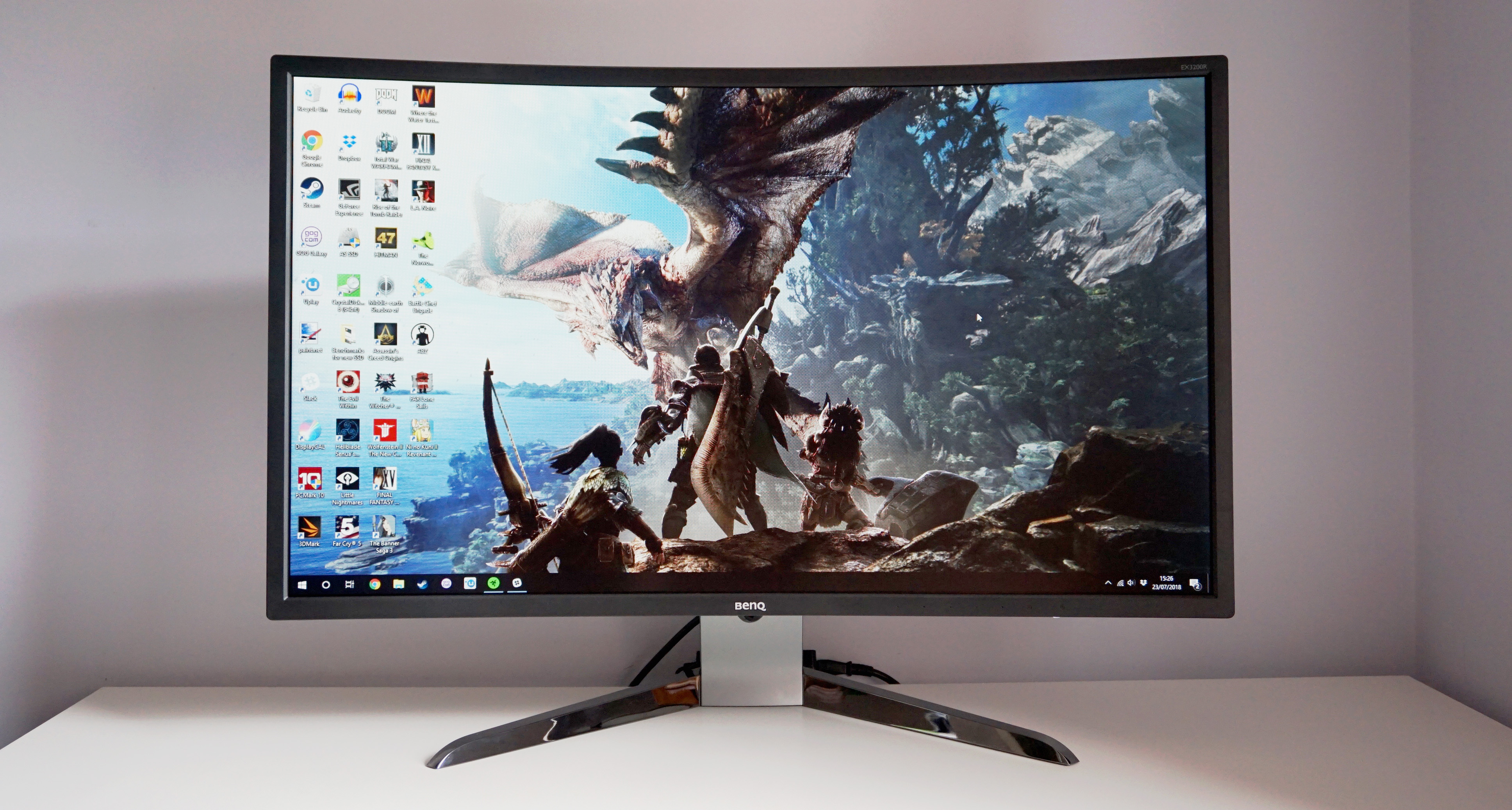 In its defence, the EX3200R's black levels and contrast are both excellent. The former came in at a lovely low 0.06cd/m2 (the closer to 0.00cd/m2, the better), while the latter was all the way up in the 4270:1 region. That's fantastic, as it ensures nice inky blacks when you're looking at something dark onscreen, but there's still lots of juicy shadow detail to help you pick out what's lurking in the gloom.

The monitor's maximum brightness level was also pretty decent - it normally hovered around the 275cd/m2 mark on most of its colour profiles, but switching to Custom saw it push up to 310cd/m2. You won't need anywhere near this most of the time, but if you happen to have your monitor near a sunlit window, at least you've got enough leeway to crank it up if necessary.

The EX3200R's multitude of different picture settings also offer a few tricks to help make the monitor more usable on a daily basis, too. Annoyingly, a lot of them are locked off if you're not using one of the Custom colour profiles, but I found that setting the monitor's gamma setting to 5 (the highest) helped to make text look a lot clearer. It didn't affect the monitor's colour accuracy either - if anything, it gave everything a little bit more contrast and definition. There's a low blue light mode as well to help reduce eye strain.

As comparatively cheap as the BenQ EX3200R is at £315 / $430, though, I'm still not sure I'd actually want to have it as my main gaming monitor. I might have made an exception if it had absolutely outstanding picture quality, but even that's fairly mediocre despite its excellent black levels and overall contrast. I'd just look at it everyday second guessing whether my eyes were failing me or not, thinking, 'I really wish I'd spent a little bit more on a higher resolution monitor.'

If that's still too expensive, though, then you're going to have to make some compromises, as the next best bet for your money is the much, much cheaper BenQ's EW277HDR, which is flat and has a regular 60Hz refresh rate, but has much better colour accuracy than the EX3200R and throws in HDR support as well. That costs just £166 / $230, and would be a much better use of your money than its bigger, curvier cousin.