What's this? A screen that isn't prefaced by the words 'best gaming monitor for Final Fantasy XII'? Well, I never. Yes, I'm having a small break from my 21:9 test quest to take a look at something altogether more affordable: the BenQ GL2580HM.

Before I get into the monitor's image quality, let's take a moment to appreciate just how nice it looks. With teeny bezels measuring just a millimetre thick along the top and sides, the design of the GL2580HM makes it a great candidate for multi-monitor setups where you want to keep immersion-breaking black lines to a minimum. There's still a black gap of around 5mm between where the screen actually starts and the bezel begins, but the lack of cumbersome plastic is still a welcome sight indeed on a monitor that costs so little. It also has the peculiar effect of making the screen appear bigger than it actually is - handy, when it's so small to begin with.

The stand, alas, is fixed and only offers a small amount of tilt (5-20 degrees) to help you get a good angle. It was just about the right height for me sitting down at my desk, but I suspect anyone taller than my 5ft and 6in (or 167cm) would probably need to prop it up with a few books to avoid towering over it.

You could always tilt the screen upwards, of course, but this is a monitor that's best looked at face on, as the viewing angles on its TN panel aren't particularly great. Looking at it above and below doesn't produce too much of a noticeable colour shift, but peering at it from the side turns the farthest part of the screen a noticeable shade of orange. As a result, anyone thinking about using the GL2580HM as part of a multi-monitor setup would need to make sure they didn't angle it too steeply when arranging everything on their desk. 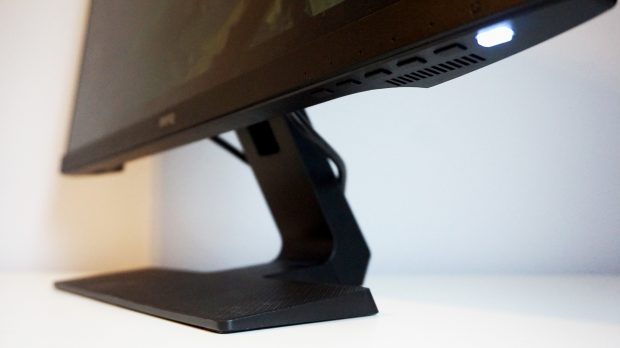 For the most part, though, the GL2580HM's TN panel isn't too bad when it comes to overall colour reproduction. You probably wouldn't want to use it for photo or video editing or anything that requires a high level of colour accuracy, but this is still a perfectly acceptable screen for everyday computing.

According to my i1 DisplayPro calibrator, its Standard picture mode and Normal colour temperature covered 85.9% of the standard sRGB colour gamut, but I managed to raise this a little higher to 87.6% by switching to the User Define colour temperature. This puts it in the same ballpark as the AOC E2470SWH. Decent, but not brilliant. In fact, if I didn't have my reference AOC Q2770PQU monitor to compare it to, I'd have said the GL2580HM looks perfectly fine at first glance. Colours may lack a bit of depth and vibrancy, but overall, it's the kind of thing I'd be perfectly happy with at this kind of price.

That is, until you get to anything involving even the vaguest hint of shadow, because the GL2580HM's black levels are pretty grim. According to my calibrator, it came in at a whopping 1.15cd/m2. That's not black (0.00cd/m2), that's a dark shade of grey, and it showed in every single one of my test images. 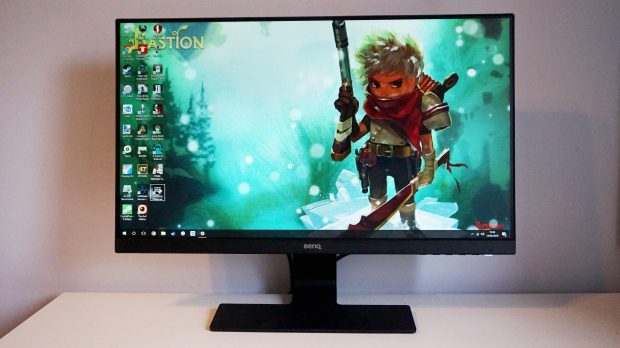 When black levels are this high, shadows start to lose all sense of depth, making images and games appear flat and lifeless. Try playing spook-fest Little Nightmares on this monitor, for instance, and you'll not only have to whack the brightness slider up quite high before you get what the game considers to be the 'correct' balance between light and dark, but you'll also only get shadows that look like a brownish haze for your trouble. My reference monitor, on the other hand, was able to go much lower on the game's brightness slider and produced a cooler, more natural-looking kind of gloom.

Then again, it probably doesn't help that the monitor's contrast levels are equally appalling. I re-ran my tests multiple times to make sure my calibrator hadn't gone haywire, but each time I got a rough contrast ratio of just 200:1. I'd normally expect this to be nearer 1000:1 on a decent TN panel, but even the £105 AOC E2470SWH managed to outshine it and that only had a measly contrast ratio of 540:1. Unsurprisingly, 200:1 is decidedly below average, to say the least.

A low contrast ratio also makes it exceedingly difficult to see any kind of fine image detail, regardless of whether it's dark or light. A white sunburst, for instance, will start to get crushed much earlier than it would on a monitor with higher contrast, while shadows start to appear as distinct chunks of grey instead of a smooth gradient from dark to light.

Going back to Little Nightmares, the opening cutscene of swirling fog looked like a cross-section of an onion on the GL2580HM, with half a dozen visible bands of grey swarming around each other. When I ran it again on my reference monitor, those circles disappeared, creating a smooth, clear image that actually looked, as it was intended, like proper mist. 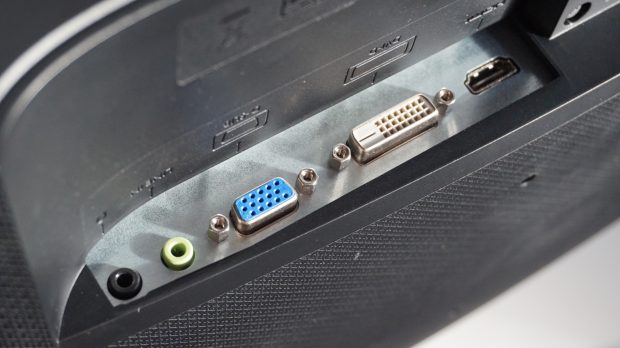 As a result, I don't feel like I can recommend the BenQ GL2580HM for gaming, especially not when the AOC G2460VQ6 offers so much more for the same amount of money. It might not look quite as nice on your desk, but the G2460VQ6 gives you FreeSync support (and by extension a DisplayPort input) and a 75Hz refresh rate for high frame rate gaming. The 60Hz GL2580HM, meanwhile, only nets you HDMI, DVI and VGA inputs plus headphone and microphone jacks.

The GL2580HM would make a fine office monitor, especially with its low blue light options and flicker-free screen for reduced eye strain and decent built-in speakers, but for games there are far better monitors to be had elsewhere.