There's a race of beings in Final Fantasy XII called the Bangaa. They have the snout of a crocodile, the squat of an ape and the arms of an entire gymnasium. Their ears are colourful leathery drapes, their lips adorned with piercings and trinkets. One of them, a shopkeeper called Migelo, resembles a rehabilitated Watto. Others are menacing bounty hunters. But they all have strange voices. Not otherworldly or fantastical, I mean strange in the sense that the voice actors can’t decide between a Scottish, Jamaican or West Country accent, and often speak as hackneyed villains. In a lot of ways, these scaly people encapsulate how I feel about this late-to-the-PC-party JRPG. They are both good-looking and incredulous. Flawed works of biological art that I can’t help but like, even when my better judgement often says “no”.

It’s difficult to describe the joys of a Final Fantasy to those who only see the flashing colours and bright numbers, the sewer levels and the prison escapes. The twelfth incarnation holds few surprises and its age shows. You are tasked with killing a fetch quest of rats within the first half an hour. That fifteen - sorry, XV - of these monstrosities of language and graphics have been brought into existence is sometimes baffling. And yet to me playing a Final Fantasy game is still a happy experience, like putting your sticky fingers deep into a pick ‘n’ mix of sugary JRPG nonsense. Here’s the liquorice katana. And look, a strawberry crystal. I will probably feel sick after this, because there’s always too much in this bag. But will I stop scoffing these chocolate chocobos? No.

To explain some basics, FFXII takes place in a world where Star Wars collides with Aladdin. You are Vaan, a skinny orphan thief with big dreams. You make friends with sky pirates, rebels, a princess and, uh, a rabbit woman in lingerie. The usual cast. You get into trouble early, and are thrown into a sandy prison pit, where Balthier (Han Solo with a better vocabulary) chides you for reacting in horror at a dead body. “Relax,” he says. “It’s just a corpse.” Between the scene-setting and quest-getting you’ll be fighting men in armour and hunting monsters in a semi-open world. It’s tropey, dopey and sometimes mopey, and shares the curse of the RPG in general: your adventure only really begins when you escape your hometown.

In this way (and others) it is a time vampire. It takes about 4 hours just to get to the interesting cogs of the battling – the gambit system. Fighting slimes is not turn-based here, but it isn’t exactly real-time either. You program your warriors and mages to follow set instructions, called ‘gambits’. For example, you can tell your black mage to target fire-weak monsters with a big flame, or your white mage to cure anyone who falls below 30% health. 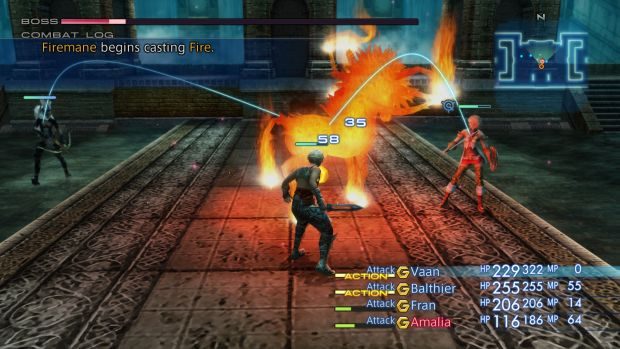 These are simpler examples. Later, you’ll buy gambits that let you target enemies who pass a specific threshold of health or magical power, or gambits that will help automatically rid your mages of the pesky ‘silence’ status. The game at this point becomes about balancing and tweaking these simple ‘if-then-else’ lists to deal with new enemies. A mimic queen absorbs lightning, so you’d better swap one gambit for another. A flan creep makes everyone blind, so you’ll have to invent a new gambit to cope. You’re essentially an off-screen engineer, fighting every boss with a bunch of magic Roombas. Although that sounds ridiculous, it’s more interesting to me than the old method of punching through turn-based menus. And if it really irks you, you can turn it off completely. There are other things to know about classes, battling and baked-in cheats, but I'll let our Spawn Point article explain those.

Twelve years after it’s appearance on PlayStation, however, the gambit system remains an odd halfway house. It seeks action-heavy combat yet never truly leaves the old way of the series behind. This is FFXII’s defining characteristic. It’s an RPG encased in amber, caught between the classicism of previous games and the action of the new age. It’s perhaps more interesting as a piece of history, a transitory relic for completionist fans (or a warm soak for trope-bathers like myself) than a game for those seeking an entrance or re-introduction to Final Fantasy. Alternatively, it's a good place to discover wonderfully over-written bestiary entries. Eg. the "mighty cockatrice". 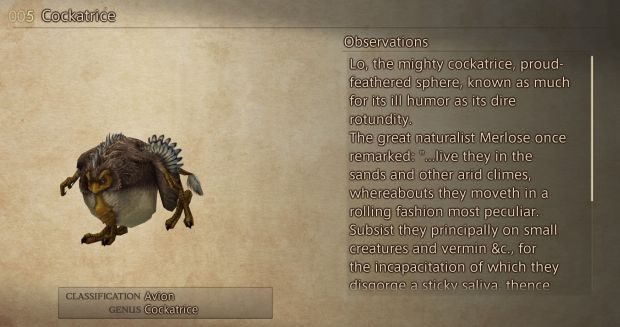 The world itself elicits mixed emotions. The palaces, streets and deserts often feel indistinct, thanks to simplistic, maze-like level design. There’s a lot of map-checking and less learning your way around by sight. The old marketplaces and cobblestone villages of FFVII and its generation were static but they were beautifully illustrated. Here, the best art is relegated to the character design, the scaly Bangaas, piggish Seeqs, cat-like Revs and antagonistic Judges.

Not that the edifices of this Arabian Nights styled world are artless – every tile is covered in looping, geometric designs – but the way its bazaars and aerodromes are put together often feels less hand-crafted and more MMOish. 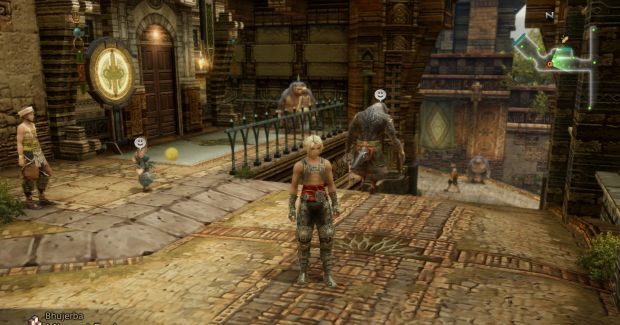 There are other off-putting elements. Despite it being one of only three Final Fantasies I have actually seen through to the deicidal end, it still drags its heels getting to the good parts, serving up long corridors or monster-peppered forests to roam and grind within. To make the most of the tale, it takes setting your pain threshold for this merciless, old-fashioned RPG design to ‘high’. My own threshold when it comes to Final Fantasy drops off at ‘Any part of FFXIII’ and those knowledgeable about the series can decide for themselves what that means. 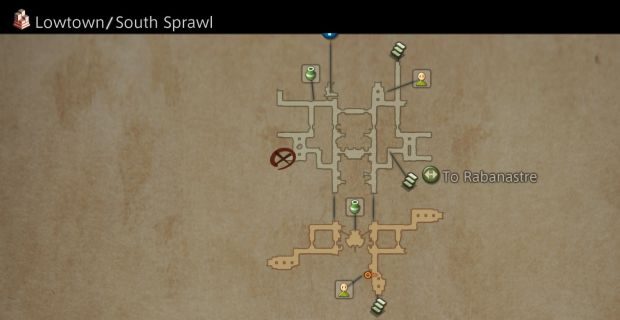 To grant further context, the way I feel about Final Fantasy is how I imagine others feel about soap opera. It’s a sweet-smelling heap of biowaste, but I’ve been wading through it too long to imagine living any other way. I still smile at all the badly translated jibes, I still get invested when Vaan leaps on a prisoner’s cage and shouts “You killed my brother!” Or when this group of misfits strap themselves into the cockpit of an airship in a clear nod to the seating arrangement of the Millennium Falcon.

The sky cities intrigue me, the kidnappers goad me. The empire, against which your band of outlaws is pitted, enflames my childish sense of justice. I see the recurring characters of Biggs and Wedge as the Rosencrantz and Guildenstern of gaming, and understand myself to be an absurd person who now writes apologia instead of reviews. Sorry. 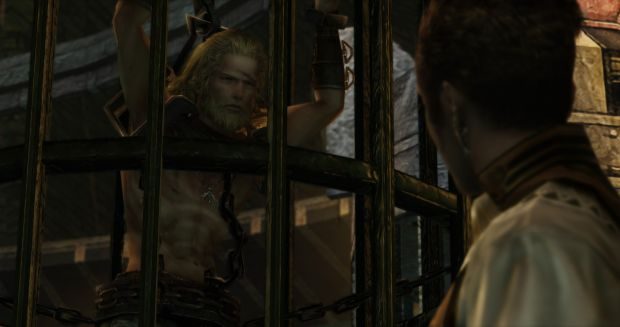 In summary, I'd happily recommend FFXII to a particular type of person. This Star Aladdin tale is simplistic, bright-faced and sodden in the familiar grease of the series. I wouldn’t hand it to anyone seeking an entrance to this sugary universe (for that I’d still tell them to brave the middle-aged editions VII, VIII or IX, which - despite their age - remain the best chance a non-follower has of understanding the Final Fanatic). It's also absurdly overpriced at the time of writing, costing £35, which seems steep for a game as old as The Elder Scrolls IV: Oblivion. But when a sale comes along I will be the first to invite all ye completionist trope-soakers to partake, to wade around in this sweet trash heap one more time, listening to the guttural Scots-Cornish-Caribbean of my old friends, the Bangaa.