This is Spawn Point, where we take something from the world of gaming and explain what it is, why it’s worth your time and how you can get involved. This week, Final Fantasy XII is coming to PC - a whole 12 years after its release on PlayStation 2. That’s good, it’s one of the better ones. If your idea of Final Fantasy is boring turn-based battles, well, that’s fair. But this one is a little different.

Go on then, what’s this one about? WAR. Plus some other things. Rogueish airship captains, a princess, an orphan, a resistance, and some scary judges in big armour. This is all expected from Final Fantasy. But in tone it’s the closest the series ever got to being Star Wars. It’s a swashbuckling fantasy tale. More Stardust than The Hobbit.

Oh cool, does it have a woman who’s also a star? No, but it does have an emotionless rabbit woman in a leather bodice.

Uh, excuse me? She’s called Fran and she’s co-pilot to Balthier, the gentleman sky pirate and de facto protagonist of the game. For the sake of the JRPG, she fulfils the role of slim girl in impractical clothing. For the sake of our Star Wars analogy, she's Chewbacca. 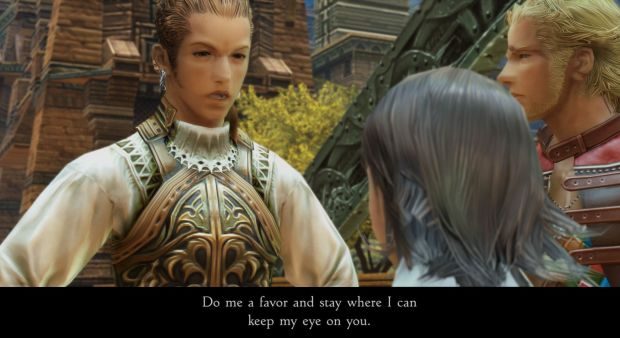 Wait wait wait, what do you mean this Balthier guy is the “de facto” protagonist? Right, yes. You play as Vaan, a blonde orphan with dreams of sky piracy in the magical world of Ivalice. But mostly, he’s just along for the ride, like Luke Skywalker. The rest of the gang are more interesting and fun. Through hijinks and plotstuff you eventually learn that to save the world you must find the--

Great destructive power, right? Are you reading my notes!?

I don’t need to. Every Final Fantasy is the same. Ah, well, it’s true that the same elements repeat themselves in the series. But I like to think of Final Fantasy as comfort gaming. It’s like having a nice long soak in a bathtub full of warm, soapy tropes. Yet in many respects, the twelfth instalment breaks away from the older games in exciting ways.

Oh neat. How? It lets you control the camera.

Ooooooh. In previous games your screen freezes and you get launched into a slow battle of menus and sub-menus. But in the world of Ivalice, you can see the enemies before approaching them. Battles are normally telegraphed and you get time to prepare and know your enemies, even consulting a bestiary. It still often feels clunkily JRPG-like because your actions are still determined by menus rather than buttons mapped to sword swings. But fight to fight this was a massive change from the previous games. And that style of battling stuck around, even until Final Fantasy XV. 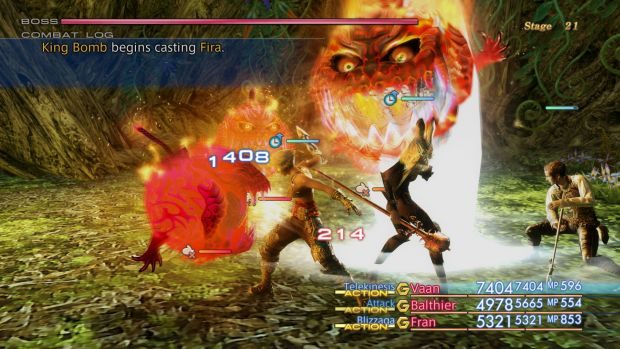 Okay, I’ve seen some footage and it seems... overwhelming. I can see that. But much of this colourful on-screen furniture is helpful. For example, lines are drawn between people and creatures to show who is attacking what. But much of this busy screen is redundant, since the real fighting takes place outside the battle.

Ah yes, in the minds of the combatants! No. In the configuration screens.

Oh. I mean the “gambit” system. Basically, you program your party members to fight in specific ways. It’s comparable to Dragon Age’s tactics. In practice this is another menu where you’ll spend time between fights tinkering with ‘<’ and ‘>’ symbols. But fill in these gambits correctly and you can automate the fight with satisfying precision. You can get your healer to cure anyone whenever they fall low on health, for example, or program your black mage to attack enemies weak against ice with Blizzara.

That sounds like there’s no game left. It depends. If you’re into JRPGs, it’s oddly refreshing. If you’re into programmable AI, it’s great. If you want to hit things with your sword, one hit at a time, in the ponderous fights of old, well... you can always interrupt the gambits at any time. Taking control of a character will always put your decisions before the automation. Or you can turn them off completely. However, it's designed in a way that expects you to do some if-then-else-ing. 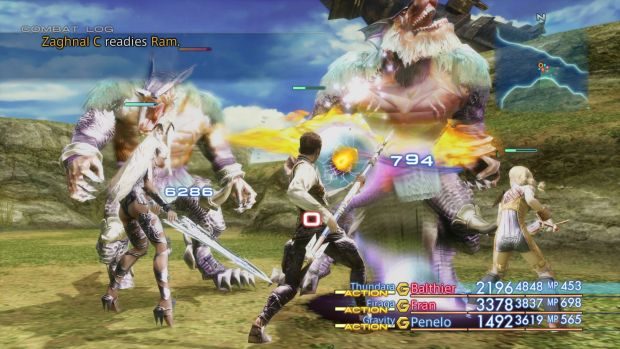 I’ll admit it, I like Star Wars. But I really can’t be bothered with all the grinding. That’s okay, many Final Fantastics feel the same. Howe--

It’s bloody not. It is on the websites I visit. Anyway, for anyone who despises the grind, the remastered ports have always understood that many players will be returning for the story, not the game. So they include built-in cheats you can activate at any time. Final Fantasy XII is no different. Basically, you can fill your bank account full of gold and your skill tree with XP from the first moments. And if you really want to rush through the brawls and see the environments and cinematics, there’s a button to double the fight speed.

So this is the original game? Not quite. Its full title is Final Fantasy XII: The Zodiac Age. In other words, it’s the remastered version that came to the PlayStation 4 last year. It’s got a bit of a reworked class system and HD textures that some would say look worse than the original. But yes, the original is intact, although we don't know what the PC port is like yet. It also features hunting huge creatures as a profitable pastime.

I love Monster Hunter! OK, but listen. The monster hunting is only a very small part of it. For real dino bashing, there’s Monster Hunter World, but you’ll have to wait until Autumn to play that on PC, even though all your console mates got it last week.

Final Fantasy XII is out on February 1 on Steam