During 2004-2006, I probably thought about Battlestar Galactica at least once an hour every single day. Grown-up sci-fi where everyone was at least a bit bad, the space battles felt tangible as well as spectacular and the enemy was as unknowable as they were implacable. And then... well, let's instead pretend what happened didn't happen, BSG stayed the BSG we all loved, and some time in the middle of all that we got Battlestar Galactica Deadlock [official site], a 'simultaneous turn-based' strategy game that's all about space battles and space battles alone, and most importantly, missiles do that cool, slow, curvy thing as they fly.

Let's pretend it happened in 2005 rather than 2017, and this is but a fond look back at a time when everything BSG touched turned to gold.

BSG Deadlock - the 2005 strategy game we all conveniently forgot about until Autumn 2017, even though it was definitely released 12 years ago and not just a few weeks ago, is a prequel to the TV series. But only in as much as this gives it the excuse to not get caught up in what were then the ongoing adventures of Adama and all his frenemies.

It's set during the First Cylon War, a few decades before the fall of Caprica (as seen in the BSG pilot), and that's close enough that it has mostly the same Colonial and Cylon ships, with a handful new types thrown in for strategic variety. A few familiar surnames crop up during the campaign, distant relatives to check a few fan service boxes, but other than that the focus is on defending the 12 Colonies from Cylon attack, rather than escaping their near-total destruction, as the TV series concerned itself with and most certaintly never diverted off into anything quasi-religious instead.

As such, back in 2005 we were delighted to get a BSG that looked exactly how we'd want a BSG game to look, which is to say gigantic metal hulks turning slowly in the inky infinite, while Vipers and Raptors darted around their hides like fireflies. All this presented with cock-eyed cameras jumping from the close-up to the far-out, missiles that move like harpoons through a deep ocean, and a war-drums soundtrack that fuses East and West. Deadlock set the standard for BSG games and was never bettered, which is perhaps why it feels like it was only released a few weeks ago rather than over a decade ago, as was absolutely, honestly the case. 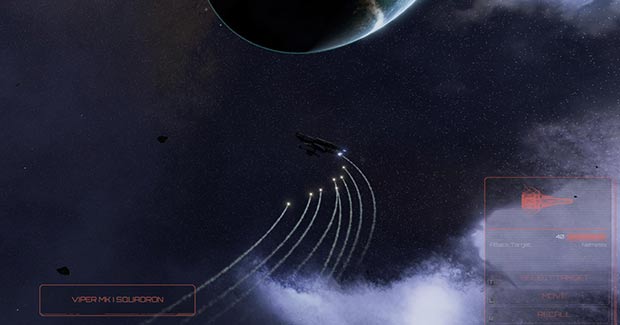 I say that, but Deadlock can be a bit of a drag too. In my experience (not a complete experience yet... er, I mean, my memories of the many weeks I spent playing this in 2005 have grown foggy), a few turns of thrilling yee-haw action as you point all your ships at the Cylons, encircle them with the big lads while swarming them with the little'uns, are often followed by ten turns of very slowly moving everything over to the one or two enemies left on the other side of the screen.

Deadlock has a neat solution to the problem of turn-based not being as inherently filmic as the real-time battles we saw on TV. You give orders during your turn, the enemy gives theirs (and this happens silently and immediately in singleplayer), then watch, in real-time, the 15 seconds of movement and action that result from everyone's choices. This is something of a best of both worlds approach: the time and headspace to think tactically, and the sensory pay-off of a live dogfight. 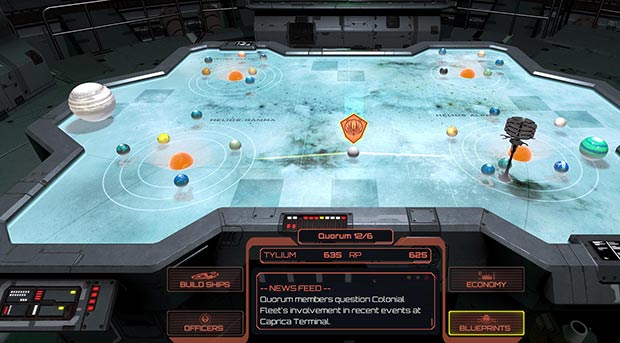 It's fantastic during a heated battle, both slicing it into thrilling snippets you have a chance to respond to and eliciting unblinking, wordless prayer that this turn, this turn will be the one in which your guys deal the deathblow to that Cylon Talon. But it's boring when there isn't much happening, and you have to watch all your ships slowly cross the screen for 15 seconds, click end turn, wait 15 seconds, click end turn, wait 15 seconds, and so on.

That said I only, er, remember the earlier levels of the campaign, which haven't cranked the complexity up as far as it'll go. Perhaps my memories of all those long, happy nights with Deadlock in 2005 will come back to me yet and I'll recall that later levels rarely gave me a chance to breathe. 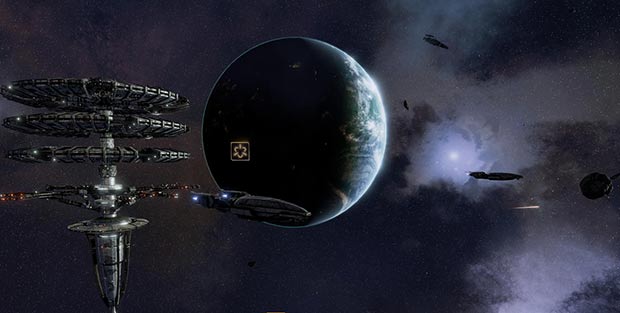 I may also yet remember whether or not much came of the sub-XCOMy between-mission colonial management elements, in which you can research and build new ships for your fleet, gather (or lose) income from the Colonies and recruit officers to boost this or that. I seem to recall feeling that they came across as rather plain, and just felt like marking time before the next big fight, but again - there's this weird blankness where crystal-clear recollection of late-stage campaigns from 12 years ago should be.

What I do know is that 2005 me was delighted by Deadlock, determined that this was a true, the true Battlestar Galactica game even if the pace was uneven and everthing outside of combat felt a little barebones. 2017 me? 2017 me doesn't think about BSG anymore. I'm pretty sure that, if Deadlock was released right about now rather than so many moons ago, I'd think it was a pretty solid, distinctive and mostly great-looking sci-fi strategy game that did its own thing rather than tried to be a poor man's Homeworld.

Battlestar Galactica: Deadlock is available now for Windows PC, direct from the devs or via Steam.