It’s taken time to build up a decent collection of Half-Life: Alyx mods, but not as long as I thought it would. People were building them before Valve released the proper SDK, and now it's out there are hundreds of levels, weapons and experiments. I had a great time sneaking through forgotten areas of City 17, or taking time out from Combine harvesting to toss a few bowling balls (and bullets) down a ten pin alley.

Given how expensive VR can be as a hobby, gaining extra anything is always welcome. Particularly if it uses one of the best VR games there is as a basis. Alyx mods have an immediate advantage given how much fun it is to just mess around with basic game elements, and though some are just good examples of more of the same, here are some left-field add-ons that will keep the game on my PC for the next few years.

How to mod Half-Life: Alyx

As you’d expect, all of these mods are delivered via the Steam Workshop. Just subscribe to them and they’ll download. To enable them in-game, you need to first load them in the mod section of the menu.

When you start a new game, you can choose to start a game with any of the enabled mods, combining them if necessary. That’s how you can add the Halo pistol to the Halo level below.

Belomorskaya Station is impressive for a number of reasons. It’s set in an abandoned subway station, and though Valve used that kind of location a lot in Half-Life: Alyx, this short trip does a few things differently.

It’s overtly horrific, with the darkness fighting against the flickery flare you carry. It removes the gravity gloves completely, leaving you with no recourse but to tip-toe through the shadows to build up your ammo reserves. It’s amazingly atmospheric.

Overcharge has a large section of City 17 that feels lived-in and overrun. It takes you through a number of areas in a short span of time, from the city streets to the broken apartments. And, of course, down into the subways. There’s nothing here that’s hugely different from the main game, but it’s well made and the perfect thing to grab if you’re in the mood for 30 more minutes of Alyx. 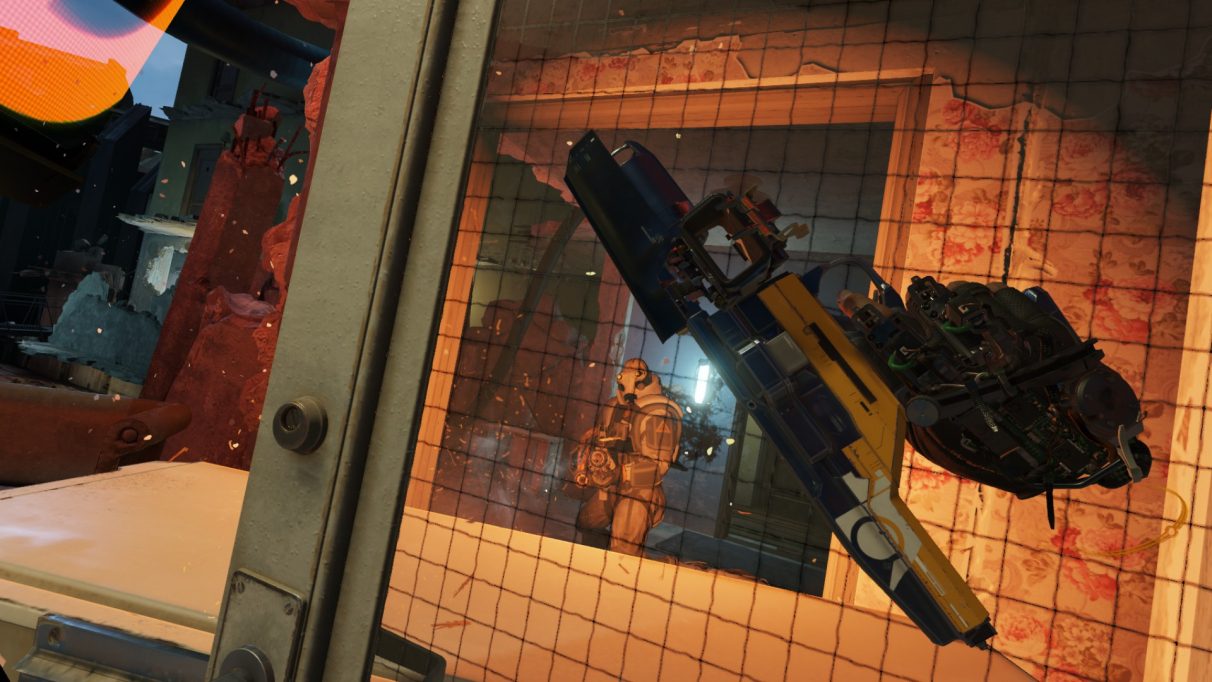 Spaceport is a small but impressive Halo-themed map. Though the enemies are still Alyx-based, there’s plenty of additional stuff to explore, not least the curvy, shiny sci-fi level that’s very well designed. There are some neat puzzles that Valve didn’t work out with the main game, like using the gravity gloves to perform some nifty timed yanks through force fields.

This glorious Halo pistol ported over to Alyx is the perfect companion to Spaceport.

The Combine must really love booze, because you’re back in another brewery, fighting off their soldiers as you reccy the place. It’s smartly laid out. Instead of crafting a large warehouse, it loops in on itself, creating a dense level filled with puzzles and gunfights. If you just want more of Alyx, Brewery Break-In is worth playing. 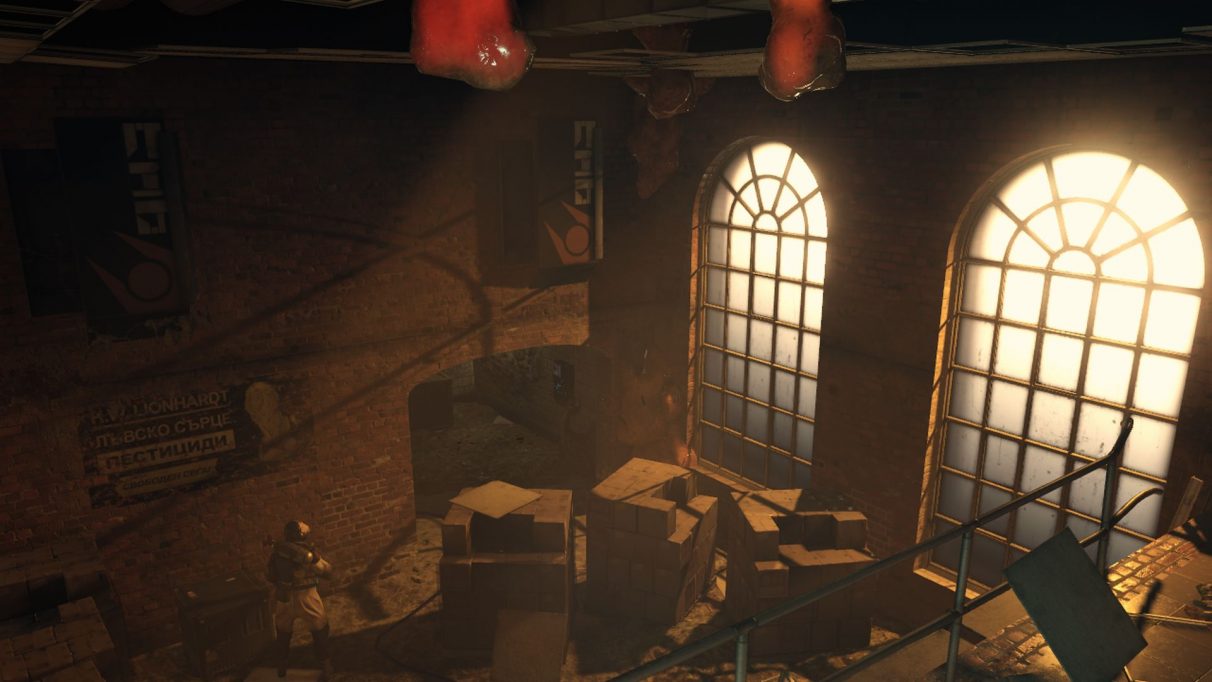 A private ten-pin bowling alley with the G-Man as the bartender. I’ve spent more time playing this than any other mod. It’s not perfect, as the balls can’t be curved down the lane like a pro would be able to do, but it’s oddly addictive. There’s a counter to keep score, and if you get frustrated you can spawn a gun and take down the pins in a more dramatic fashion.

This was one of the first Half-Life: Alyx mods I tried, and it’s still one of my favourites. It’s a horde-mode map, starting off with headcrabs and ramping up all the way through the game’s cavalcade of enemies. In between each round of bads, you can slot resin into vending machines to beef up your guns and ammo. There are even secrets and unlockable areas to explore, should you find yourself surviving without too much fuss.

I’m sure everyone’s first reaction to the idea of VR headcrabs was to hope they get in the bin. This is actually a puzzle map, forcing you to work out the best method and timing of grasping the jumpy little blighters as they fly towards your face, while dealing with a few puzzles. You don’t have any weapons, so it’s all disgustingly hands-on. 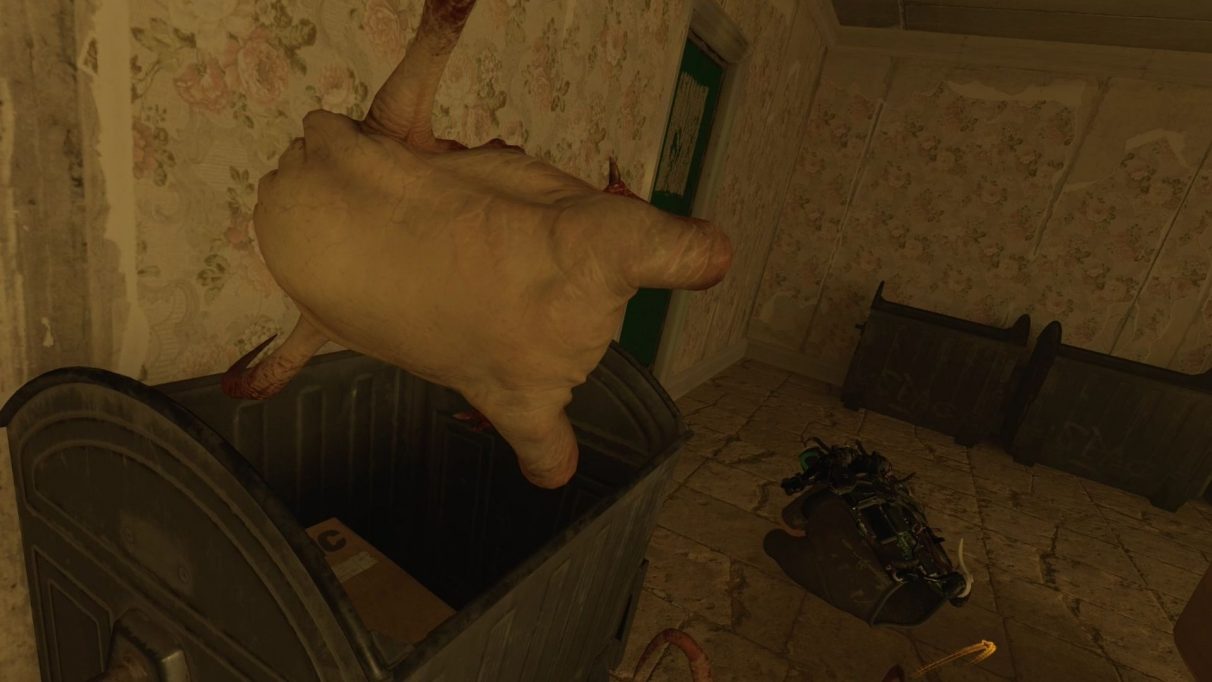 There’s more to VR target practice than just shooting. This excellent map lets you practice all of Alyx’s combat skills, which means aside from traditional static targets you can also spawn enemies or practice your grenade tossing into a series of randomly placed buckets. It’s an addictive little sandbox of violence. But it’s also a toy, with skeeball and bottle flips.

The Lost Case by wim.buytaert.1988

The best official Half-Life: Alyx levels are like interactive theatre pieces. They tend to guide you through the story as if it’s all a cut-scene, even when you’re running away from a terrifying, unkillable Jeff. Wim’s Lost Case series works a lot like that: it’s a carefully curated series of spaces that knows what you’re going to attempt before you do. There’s the usual Combine battles and resource gathering to be found. He’s currently committed to building eleven levels and has made it to three.

Push People Into Hell by JefferyMcBoyo

This very weird mod lets you spawn any of Alyx’s friends or foes and mightily shove them into hell. You can even select what scream they’ll make as they plummet. It’s also a neat way of viewing the character models up close, especially Jeff. 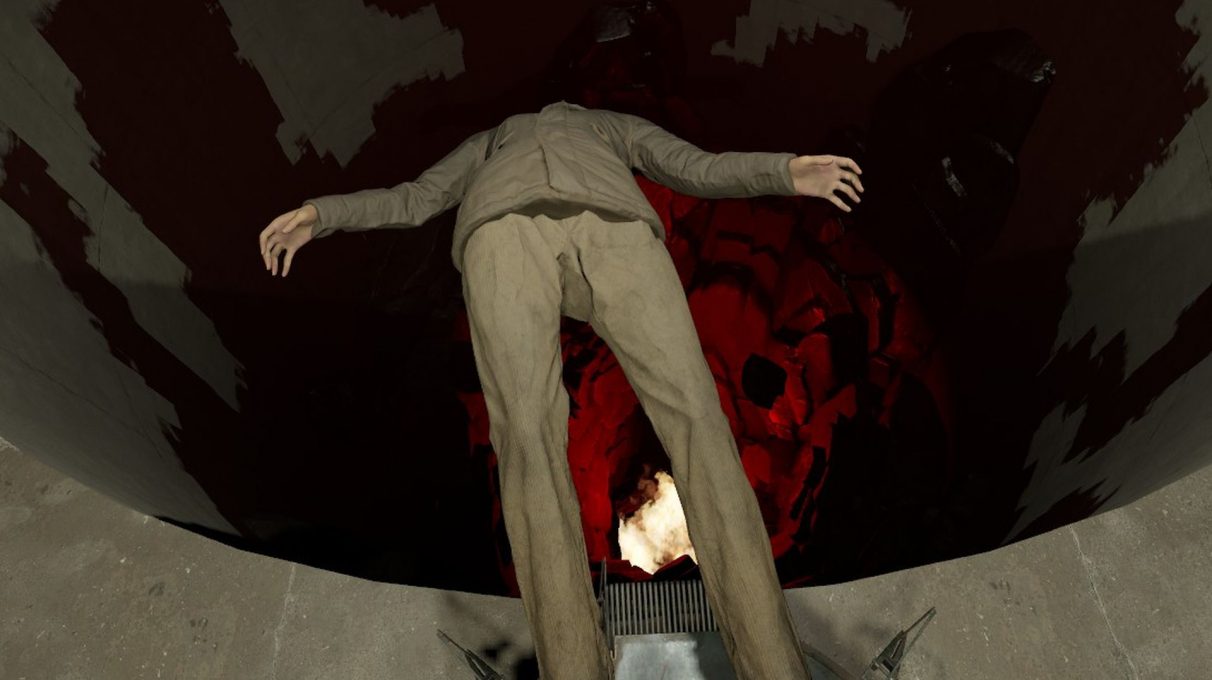 Deep Inside by NYON

Take a deeeeep breath. Jeff is back. I respect anyone trying to make a level with Half-Life: Alyx's sound-sensing mutant battering ram, as his bit of Alyx was hands down my favourite game level in years. NYON tried. NYON did really well.

This time, there aren’t as many bottles to smash to direct him around the level, but those spore grenades are all over. Your timing is thrown when planning with those rolling bombs, because they’re not nearly as precise as the bottles. The puzzles are tightly wound set-pieces that won’t let you rest for a second. 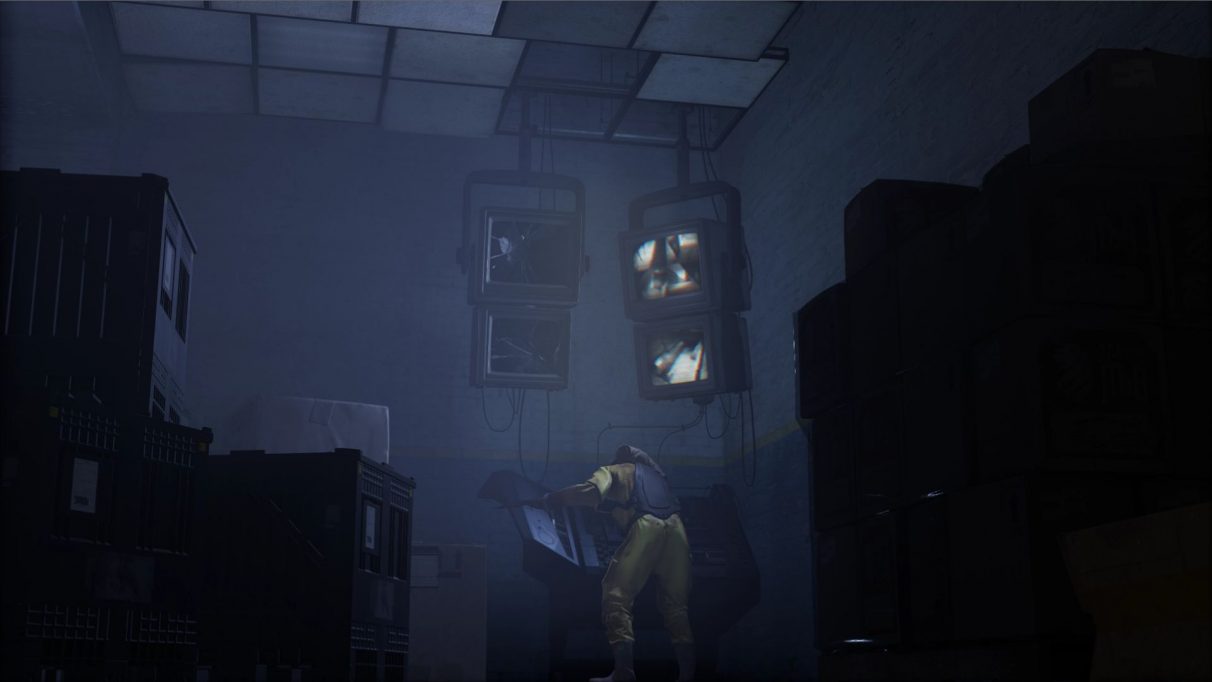 An ever-changing corridor of horror awaits you. It’s a remake of a famously failed Silent Hill reboot by Metal Gear Solid’s creator, Hideo Kojima. You walk through a corridor, leave it, then end up back in the same space. Except things have changed. There are subtle moments of horror and there are more explicit moments that will make you not want to turn around. At least you can just yank your headset off if it gets too much.

A single hole game of golf that’s little more than a proof of concept. But it’s a proof of concept that I hope spawns more, because I really enjoyed playing golf in the Half-Life universe. The putting is nice, the physics work, and the game even keeps score. 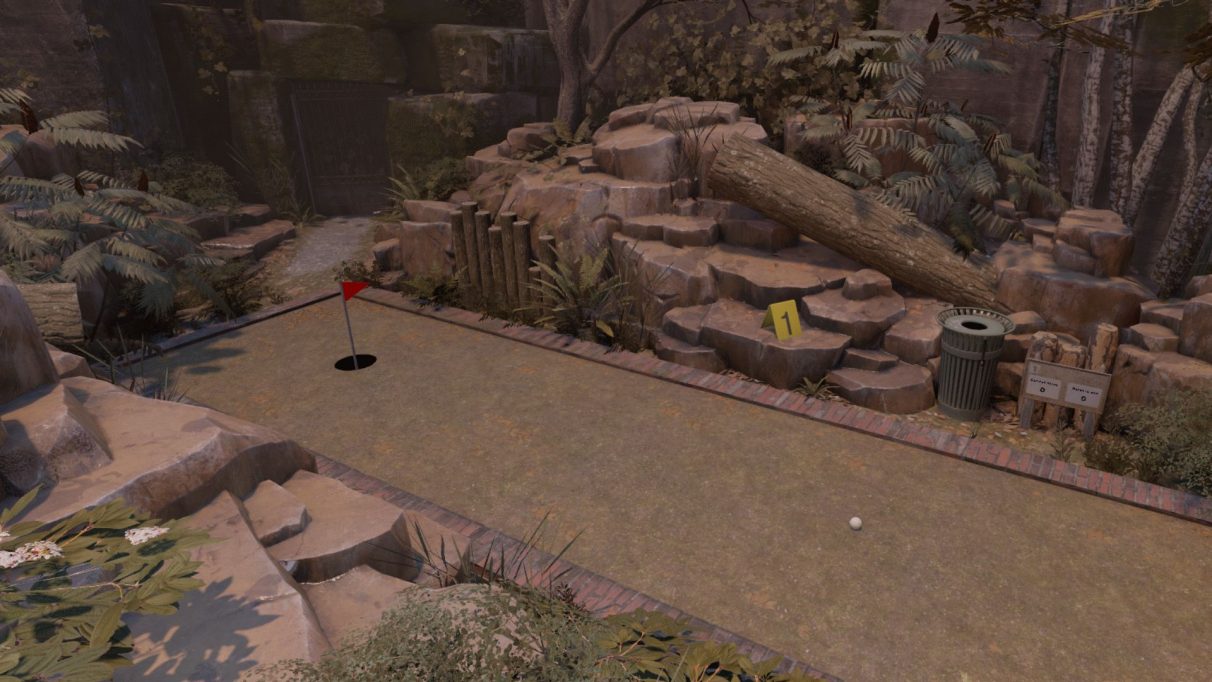 The Northern Star Hotel’s piano moved from its position in the middle of the game to a more accessible mod. Load it up and play some tunes, just like this guy did.