It's that time of the year when joyless, faintly plastic robots insist that you forego the few pleasures January has to offer, calling you a big lazy drunk and demanding you join their dull, weight-obsessed ranks. But not here, friends! This is where we find new joy. It's Unknown Pleasures.

This week we finish off the knock-off Baileys with button-mashing Empire management, queer aristocratic romance, and murderous teenaged narcissists. 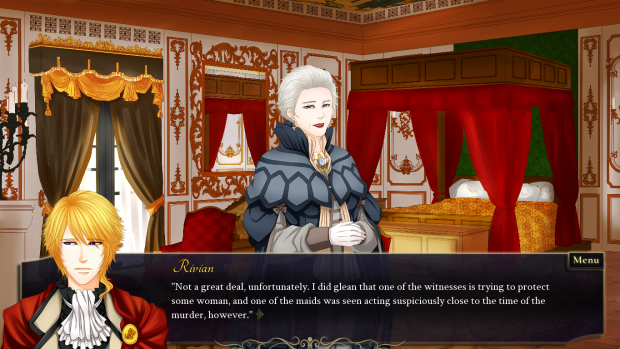 Two good visual novels in a month? I'm pretty sure that's in the Revelation. But the game-pipes deliver what they must. With its Japanese-inspired art, vaguely medieval European aristocratic setting, and stable of prettyboy characters singularly obsessed with the player character, Chess of Blades hews closer to the mould than last week's pick. Fortunately, these superficialities were easy to brush aside once the game gets going, which is pretty much immediately. Protagonist Rivian Varrison is a newly-eligible nobleman unwittingly stuck at a five-day celebration of the King's birthday. Before he can even begin to flirt with absolutely everyone in sight, however, political intrigue breaks out, forcing him to dodge killers and unroot conspirators while also flirting with everyone in sight.

Again, this isn't an unusual setup, but Chess of Blades stands out thanks to the standard of its writing. It's descriptive but as succinct and economical as the medium demands but rarely gets. Characters are distinctive and memorable, and unusually, the player character is likeable and flawed in about equal parts. The romantic options are slimmer than is typical, but they're all wound up to some degree in sinister plots, and the question of how far you can trust any of them is surprisingly compelling. It does lead to occasions where apparently innocuous decisions can inexpicably get you killed, but that rather works in its favour - like a very stripped down Alpha Protocol, it encourages you to manipulate your suitors as much as they do you. It's even got decent voice acting and music. Suspiciously good. It is, however, very steeply priced.

It's been a strong week for writing, and in this case it's good writing in an even more surprising place. Fallen Legion+ is a port that brings together two games from the Playstation 4, in which either the magical princess Cecille or her rival, Some Guy, fights over an empire. I'm going to risk losing half of you by saying "JRPG" at this point, as it's perhaps best described as a JRPG crossed with a real time beat 'em up. Cecille automatically sprints from left to right, periodically splatting whatever foes appear in her path by summoning platonic warriors with her talking book, or making on the spot decisions about how to manage various crises within her Empire.

There are two reasons it works: firstly, the combat takes the spectacle of the JRPG but strips out all the tedious dicking about with menus and turns - while there are combos and special attacks and techniques, at heart it all comes down to "each character attacks when you press their assigned button".

The second reason is, again, writing. While not incredible, it's pacey and sharp, and serves the action well. Simple games don't have to be stupid, you know?

No more writing! No more anime! The people demand explosions, and it's up to us to provide. Or, in this case, not. Royal Tumble is essentially reverse Angry Birds. Your King is atop a parapet, waiting for you to build something to prop him up with the selection of blocks (and gunpowder) provided. When you're all set, the enemy will stop politely waiting and begin bombarding your construction with their cannon. If your king gets too scared he'll surrender, and if you really screwed up he'll topple out and die, or be flung comically into the air and splat most unceremoniously into the ground, with similar results.

It's a silly bit of fun, elevated by the bright, colourful visuals and daft sound effects, particularly the excellent chortly king. There's a more traditional assault mode if you fancy doing the right thing and killing the rich instead. This is perhaps the best way to play in fact, as it's much easier and nets a fair bit of money, which is used to instantly rebuild a fallen castle. Why would you want to do that? Because the camera controls are ghastly, and building isn't as easy or fun as it should be (I'm still not sure if it's even possible to rotate blocks, which should be simple). Without the assault mode to break it up, it would be much easier to put down, and wouldn't feature here at all. 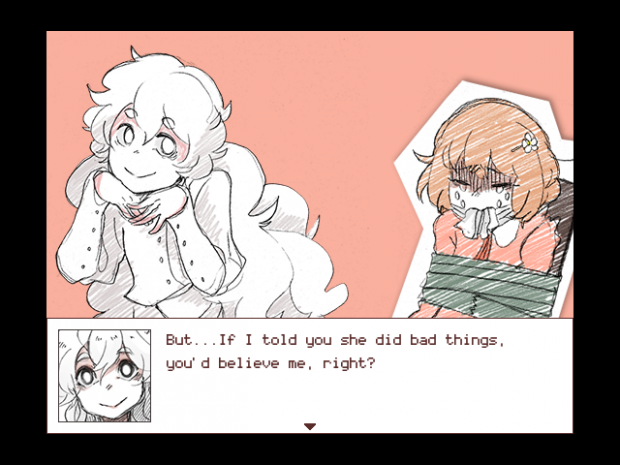 Haha, fooled you! It's anime again! It's all anime, all the time. THERE IS NO ESCAPE. This one is a curiosity, and the fourth installment of an interactive fiction series I was wholly ignorant of. That didn't actively detract from the experience, and this episode did enough to make me very curious about the others.

To begin with, you either are, or are controlling a teenaged girl who ah... gosh. She lives with a scientist who does something with lots of dead bodies, and another figure who has a perfectly symmetrical room full of lifelike dolls in her image. She goes to school, where most of the kids have either nothing at all or letters for faces, and she regularly, cheerfully executes some on stage at the behest of votes from the anonymous White Society.

It's surreal, violent, gruesome, and reminds me a little too much of someone I once knew. It'd take a full review, possibly of the series, for me to fully understand this one, as it's either getting at something very savvy and nuanced, or it's much dumber and more literal than I think. Either way, it's a standout, and I'm sure you already know if this is up your alley.

Two visual novels. Two JRPGs. It's too late for me. Send potions.

For real though, one of the big blocks many people have against playing JRPGs is the needlessly repetitive menus, and the precise ways they tend to organise their turn-based combat. It certainly rubs me up the wrong way. So Artifact Adventure Gaiden is another one that I like despite myself and the fact that it looks like a lot of other games I've tossed aside within minutes.

The King wants you to put together a team to prepare the realm for the coming Cataclysm. Doing so means picking three NPCs who'll lend their bonuses to you in battle. One might make you hit harder, another improves your rate of healing. Another is basically useless, but donates vast sums of money any time you find one of his stashes. With your team formed, you're free to wander an open world fighting semi-random (you can trigger most of them at will) battles and doing favours for NPCs. Fights are quite odd real-time action affairs where you jump around flinging axes and bombs, and try to get enemies to impale themselves on whatever weapon you permanently hold out in front of you, possibly with your eyes clenched, while screaming.

Once you've had your fill of whinging peasants and monster viscera, you can return to the King and trigger the Cataclysm (ie: skip a few years), when your actions around the world will have consequences, typically people being more willing to help you out if you gave their neighbour's annoying son a good kicking or whatever.

It's fun. A tad frustrating too, as the only way to gauge an encounter is the usual why-do-RPGs-still-do-this method of poking it with a stick and reloading if it kills you, and the music will do your head in. But I enjoyed it more the more I played it.

Pick of the week: It's Chess of Blades. 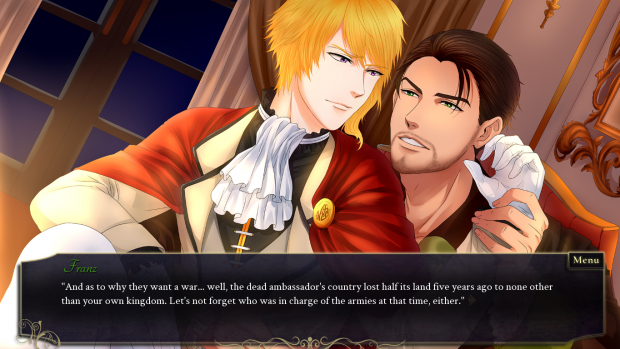 Lord knows what this column will do to my reputation as Hater of All Anime, but Chess of Blades was a little funny, a little sexy, and kept me guessing everyone's goals and motives without feeling cheated, or stuck in the role of an imbecile.