Happy holidays! Time to see what’s in your stocking. Oh, it’s another copy of The Golf Handbook (Third Edition). And some toenail clippers. Great. No, honestly, that’s fine. It’s not like little Jemima over there is dashing about in her cool lion slippers, making you ache for an era of innocence and novelty that you can never revisit. And who cares if she’s clashing her dinosaur figurines over the ruins of a Lego city? You certainly don’t. Why, you barely notice as her damned wonderful slippers go “rarr” with every step. Oh well, better go set the table for dinner.

No! We won’t allow it. Turn that holiday frown upside-holiday-down, adult friend of mine. Children do not have a monopoly on fun. Here are seven playthings that’ll make you click, smile, discover, and giggle. These are all toys as much as they are games, and they're your real stocking fillers. Enjoy. 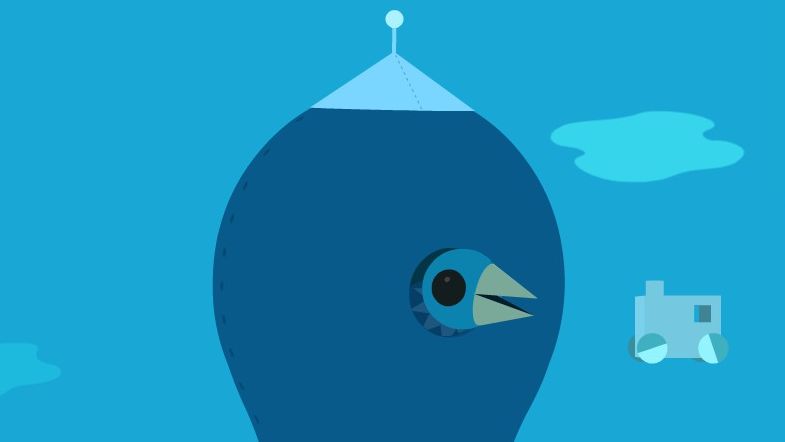 Ah, Vectorpark. King of the clickytoys. Boss of baubles. Totalitarian autocrat of fun. Windosill came out when this website was still sucking on the nipple of flash games for sustenance. Our gooey eyes looking around the web in fear and wonder. I want you to run with this metaphor. Imagine RPS as a baby. Doe-eyed, drenched in snot, unable to hold the weight of its own soft dome. An absolute moron. What could possibly appease this tiny burper? Oh look, a toyish game of clicking on things to see what happens. There’s a big hollow shape with a bell on top. Ring that bell. A bird appears. It follows you around the room. Give it a worm. The bird has offered something in return. A little cube that slots perfectly into the hole above a door. The door is unlocked. Oh my god, look at RPS, look at this drooling imbecile. It’s loving every second of this. I’m glad this website has grown up and that Vectorpark no longer grips us all in an authoritarian trance of – 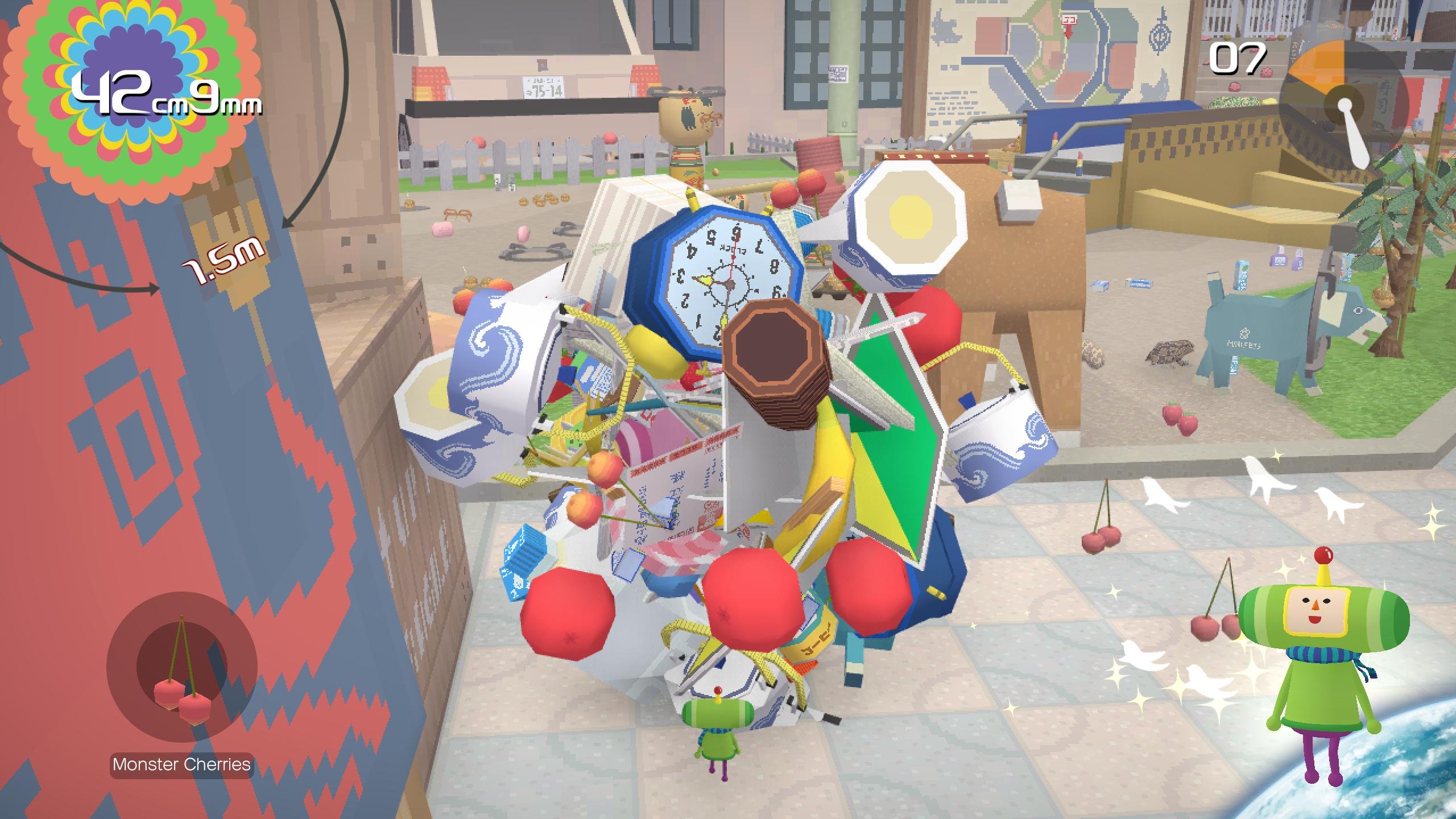 Time’s up. Your ball of stuff only got 30 centimetres big. But they say you can roll over whole cargo tankers. You can basically roll over everything. Absolutely... 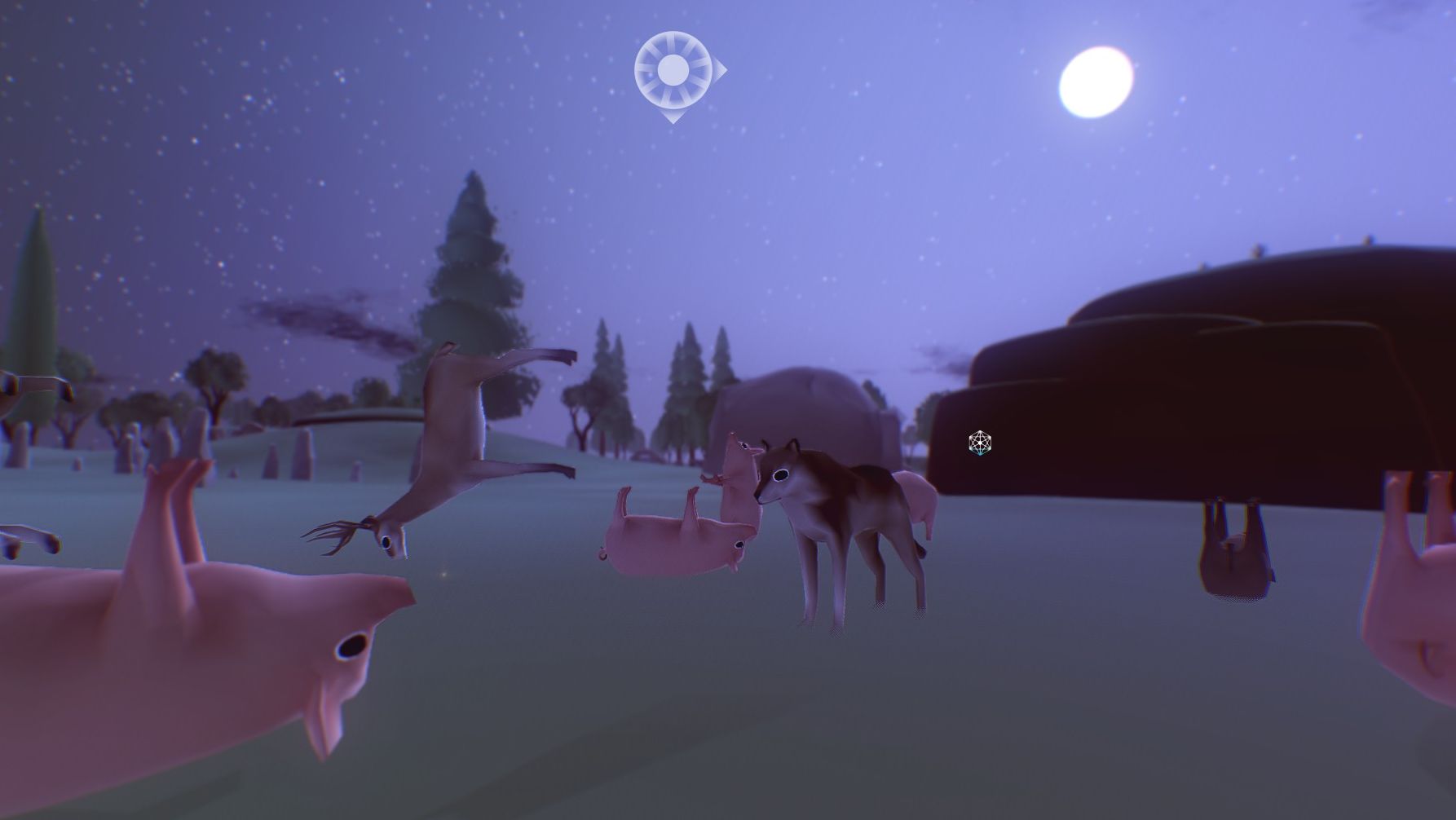 Everything by David O’Reilly

One of my favourite japes at parties is this: whenever a person finds out my job and asks me “what games do you like?” I always answer “Everything”. They think I’m just smiling politely and speaking very generally. But I’m not. I’m actually playing a huge joke on them. Inside I’m thinking: “Ha ha, I mean Everything by David O’Reilly, the game about pottering around as a cloud and then shrinking down to the size of a tree and then getting smaller, until you’re a giraffe or a lion, the game where you keep shrinking down, down, down, ha ha, through all the forms of interconnected life and matter until you are an insect, a speck, a tiny puff of energy, and then you miraculously transform through the power of cyclical astrophysics into a being of pure cosmos, ha ha ha, you fucking IDIOT.”

“Give me an example,” they say. 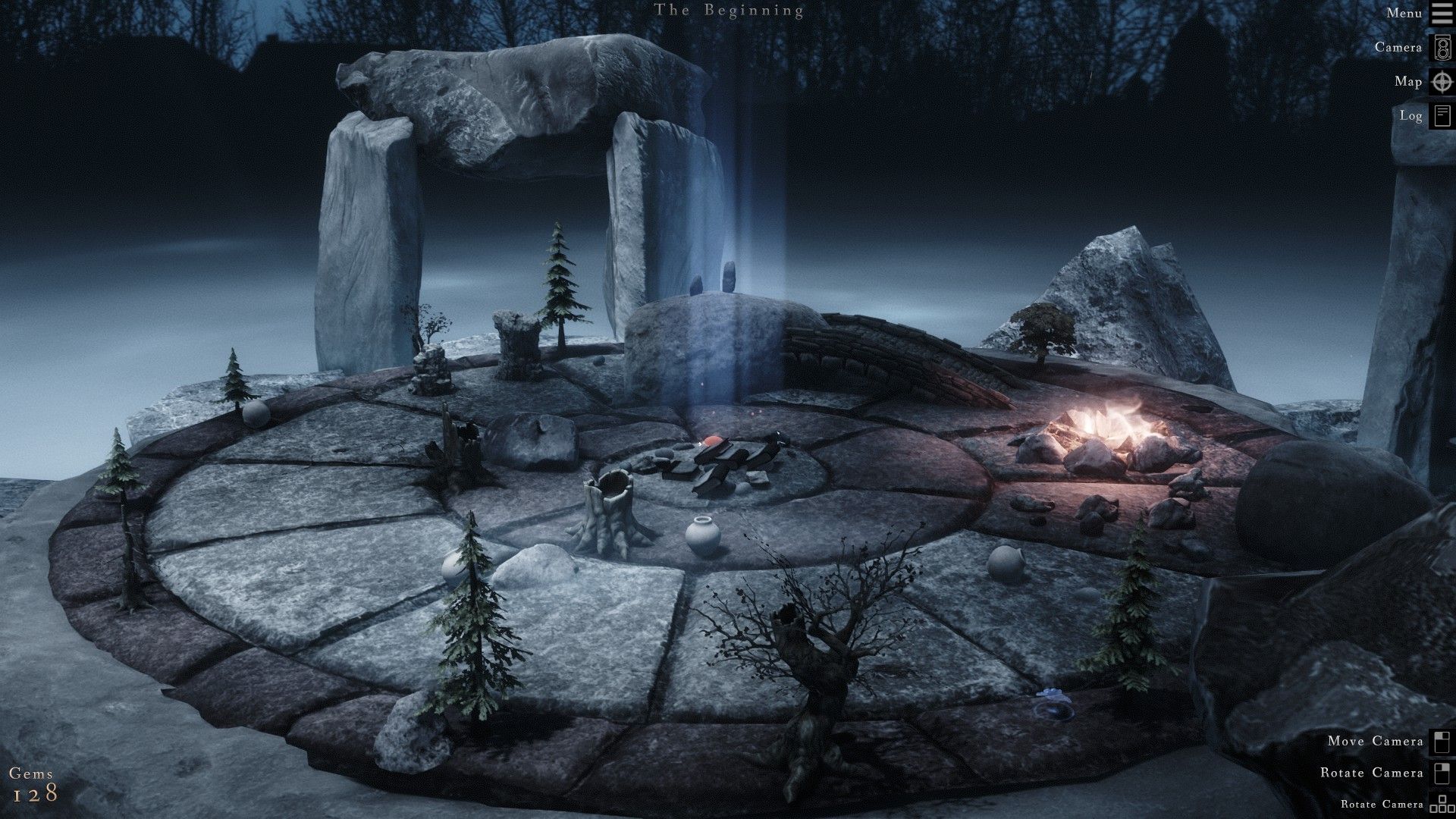 Quiet as a Stone by Distant Lantern Studios

Oof, rocks. Am I right? Stones too. Amazing. Dead tree stumps? Oh aye. Love bits of old tree. Love ‘em. Quiet As A Stone is a wee diorama about arranging inanimate objects in as pleasing or chaotic a fashion as you desire. You are faced with a stoney platform in disarray, overgrown with grass but with a nice fire crackling away in one quadrant of the circular ruin. Cut the grass to get shiny shards, and crack open said crystals to see what pops out. Boulders, stones, trees, stumps, gems, obelisks, all sorts of geological and natural objects. Then you plop these down wherever you want, or resize them to make a tiny outcropping of rocks look like a big cliff. I'm a man of order, so I like to arrange my trees on the outside of the circle, and create a glade that houses some old ruined bridges and ancient pillars. But maybe you enjoy the bedlam of nature and will use the magical "grass stone" to plant bristly stuff all over. That’s okay. You do you. This toy is about tranquility and meditation and simplicity. The perfect game for stoners (people who like stones). 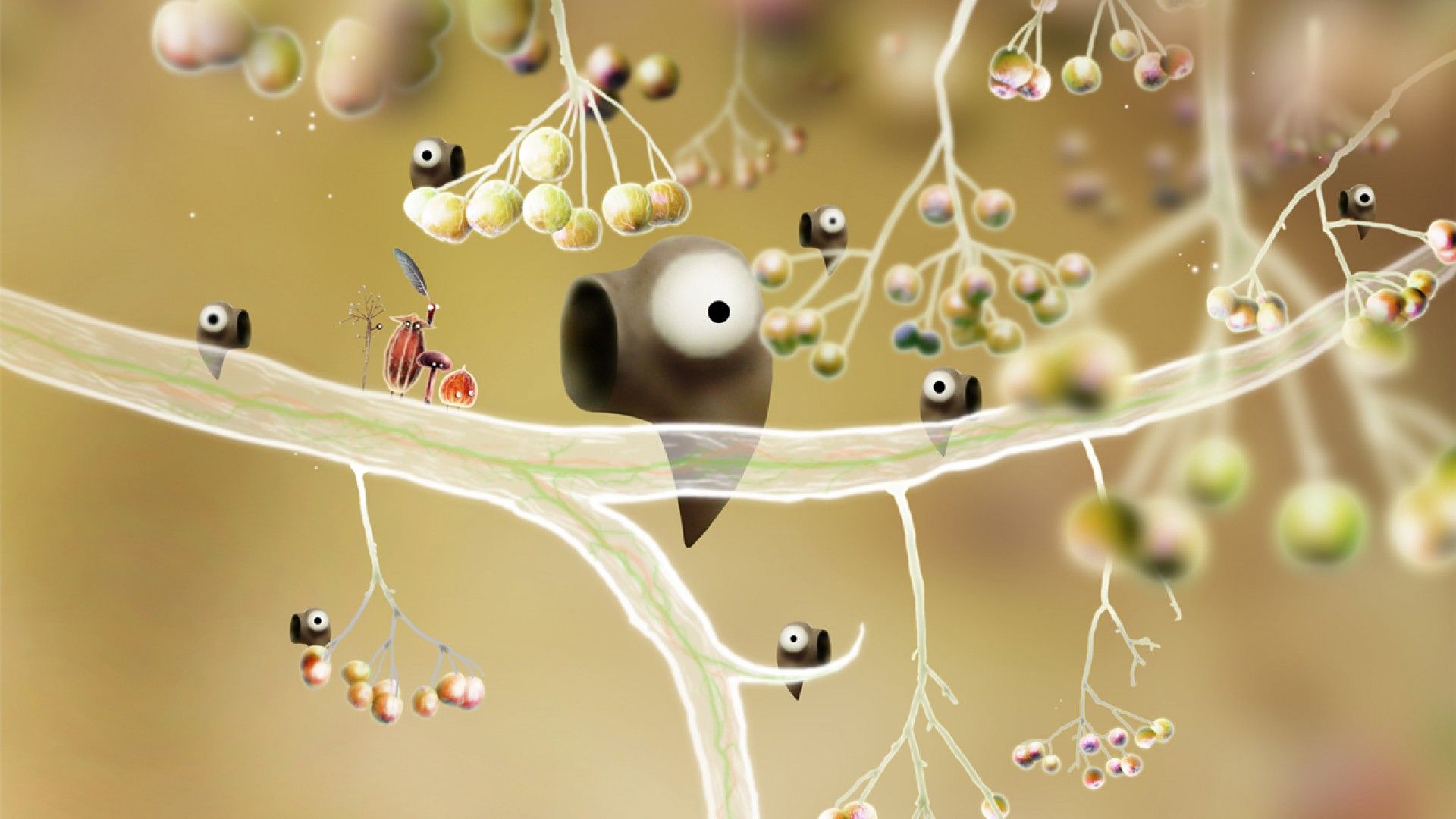 I could have picked any of Amanita’s clicky wonders here. The robot friends of Machinarium, the wee spaceman of the Samorost trilogy, the slapstick grump mote of Chuchel. But Botanicula’s plant peeps are the most playful. The brightest of the bunch. You control a posse of seeds, pods, twigs and shrooms, all of whom are wandering the woods and trying to escape a dark rot that is festering among the trees. Not to mention scary spiders. If this sounds like too much plot for a toy, fear not. Most of the adventure is about clicking on stuff just to see what it does. Little aphids chomp on leaves, snails slime their way across branches and weird big-mouthed creatures let you crawl inside their gob and fight with smaller versions of themselves. Some of this has a point, a puzzle to figure out. But much of it is just toying around and finding new animations. Like when you enter a genies lamp and are treated to a concert by two lumpy grubs. 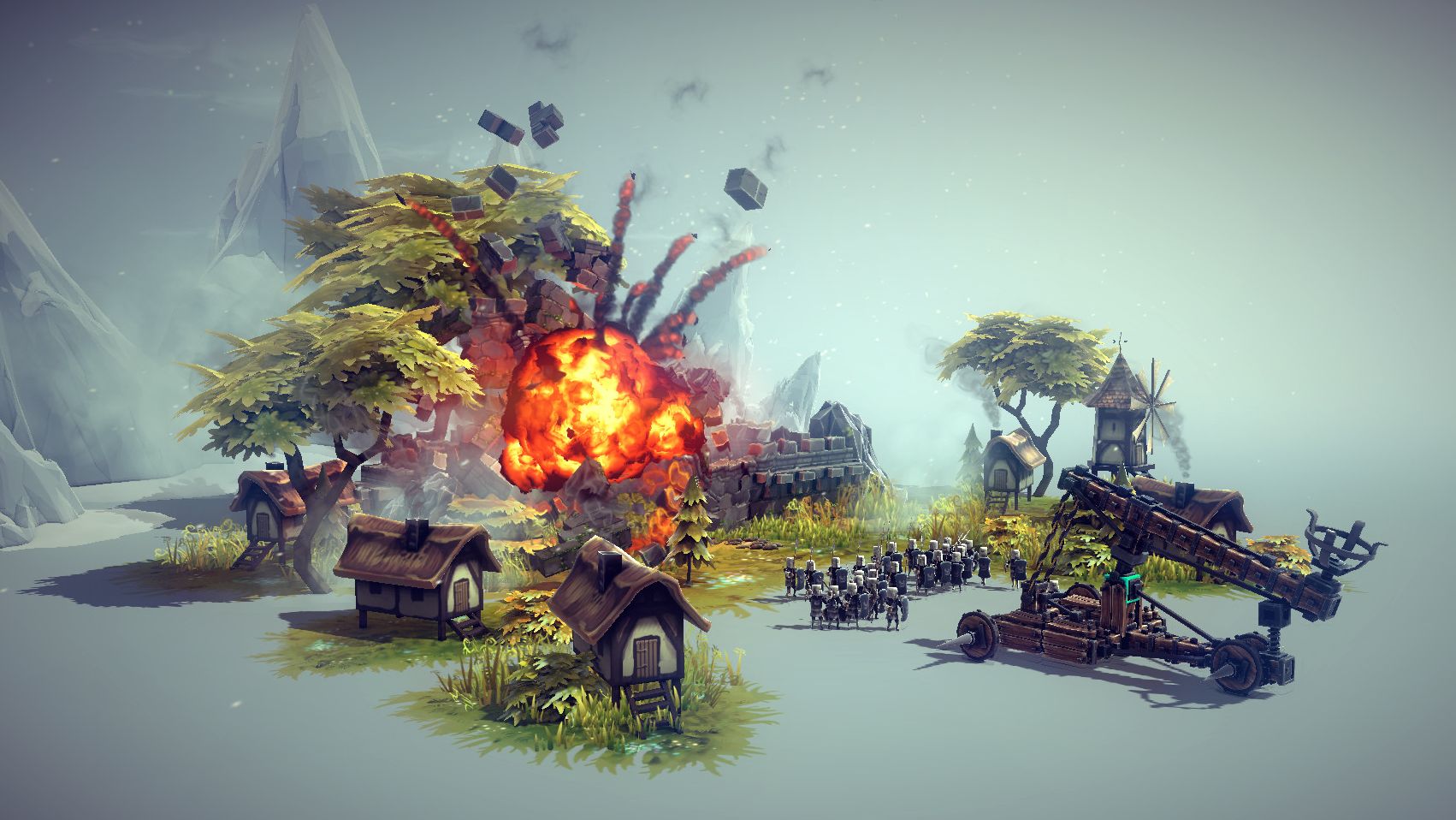 Besiege is like explodey Lego. You make chunky, volatile inventions and 9 times out of 10 it will fall to pieces after it clips a landmine and spirals into the air like a badly planted firework. Most of the other playthings on this list are about leisurely clicking on bright things and watching with a derpy smile as something pleasant occurs. They are baby toys. Besiege is for the slightly older 30-year-old. It tasks you with building a contraption that can knock down walls, or hop over obstacles, or sometimes simply steer its way through a herd of rabid sheep. You will probably be very bad at this. But one of the the beautiful things about play is that it helps us to learn. This decoupler is funny, you think. I wonder if it could be used to get the front part of glider into the air? These steering hinges are silly. I could probably use them to drag this cart along like a legless crab. Most of the time, toying with these possibilities results in a hilarious, nightmarish failure. But if you tinker enough, you might end up launching a rocket, or making a stunt plane. 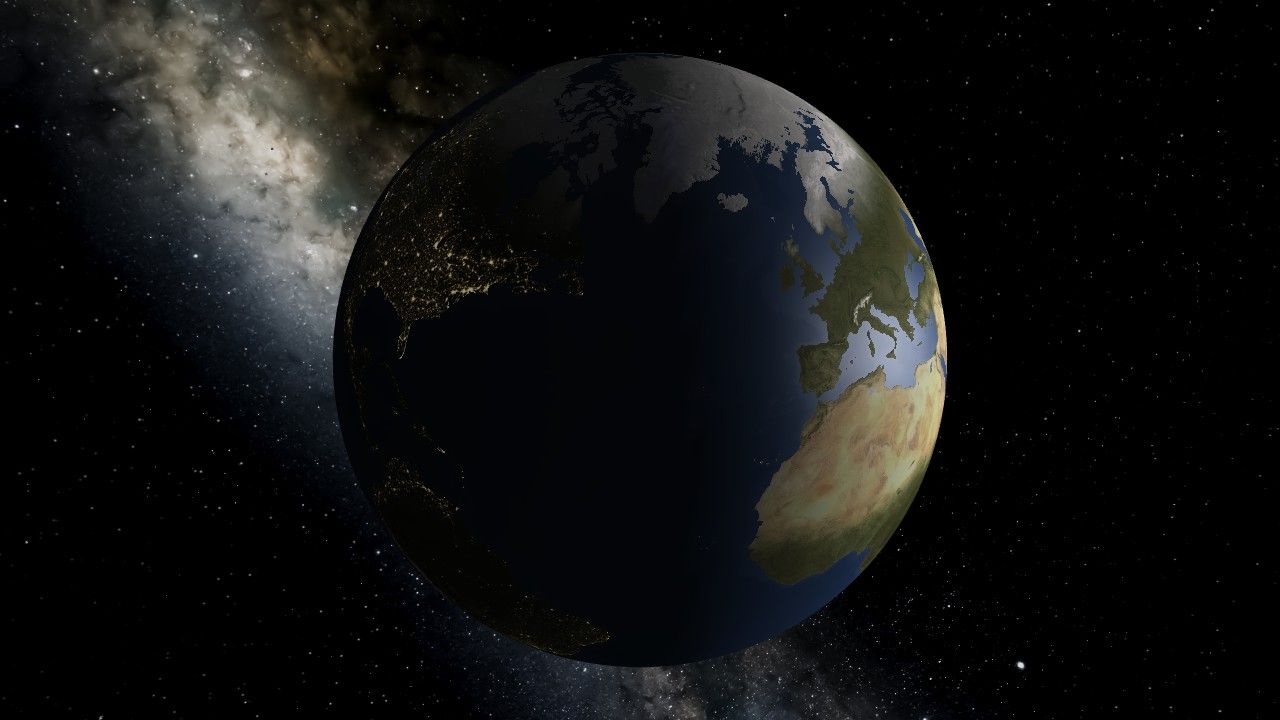 Do you remember Encarta 98? One of the best lessons on this encyclopedia CD-ROM was a model of the earth and moon. You could drag the moon and fling it across space like a billiard ball, and watch as gravity brought it crashing back into our planet, presumably wiping out all life. Universe Sandbox 2 is what happens when that tiny minigame is made into a supremely detailed simulation. This is a astronomer’s toychest. You can mess with the orbits of planets, or flick asteroids into gas giants. It comes with preset “lessons” so you can see what it’d be like if Betelguese was our star instead of the sun (hint: not good). You can graph the temperature changes of the earth, and watch the greenhouse effect turn our pale blue dot into a dusty sad dot. You can see what happens if you suddenly raise the earth’s temperature to ten times its average (bye bye North Sea). Or fiddle with our home planet’s rotation so every night lasts 6 months and Africa is covered in snowy darkness. I like to mess with the composition of the planet itself, until it turns into an uninhabitable ball of rusty water. This soothes me. But then again, maybe I’m thinking too small. These are just the changes you can make to earth. If you’ll follow me over here, to the sun, you’ll notice a fun little button in this menu. It reads: “delete this object”. Go on. Try it. It’s just a toy.