Earlier this week, Nvidia's GeForce Now PC beta left me pleasantly surprised. This was cloud gaming done right, I thought. I can play my own games on my own ancient hardware at the highest possible graphics settings and give a cheeky middle finger to all those soaring GPU prices in one fell swoop. It's almost like the PC-equivalent of the Nintendo Switch, as I can use my tiny laptop to play all the latest games from any room in my house. Having seen French start-up Blade's new Shadow box, however, I'm starting to think I don't even need a PC full stop anymore.

Whereas GeForce Now is all about letting you game in the cloud, Shadow wants to move your entire PC there. You don't even technically need that box up there in the header. That's essentially just a 4K decoder for those who want to sit down at a desk and use a mouse, keyboard and monitor. You could, in fact, access your Intel Xeon and Nvidia GeForce GTX 1080-powered cloud PC from your phone, tablet, Android TV or even a Mac, all with a single tap of its multi-platform app. The real clincher, though? You can seamlessly switch between all those devices simply by launching the Shadow app on another device. Based on an hour-long demo session, this looks like it could be the real PC Switch.

Note that I haven't been able to try out Shadow for myself just yet - a full review will be coming shortly - but after seeing it in action, I have to say it looks pretty damn impressive.

Unlike Nvidia's GeForce Now beta, Shadow isn't just another cloud gaming service. It's a replacement for your entire PC. Once you've logged in, you're immediately presented with that familiar Windows 10 desktop and from there you can pretty much do everything that you'd normally do on your current PC - install Steam, Office, Photoshop, GOG Galaxy, send emails, access Windows system settings, you name it. More importantly, you can play any game you currently own. Just like a normal PC. Suddenly, Nvidia's offering of 150-odd GeForce Now-supported games doesn't look quite so generous anymore. 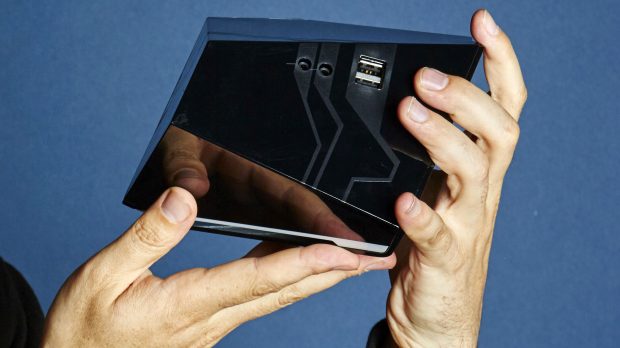 That cloud-based PC is properly powerful, too. You get eight dedicated threads of an Intel Xeon server CPU, which Blade says is equivalent to a Core i7 processor, 12GB of RAM, Nvidia GeForce GTX 1080-level graphics performance and 256GB of storage.

To get that kind of power in a regular PC, Blade estimates you're probably looking at spending £1500. Shadow, on the other hand, works via subscription, so the cost is spread over several months and years. A one-year subscription, for instance, will cost £26.95/month in the UK, which works out at £323.40/year. Keep doing that for four and a half years, and you come to £1455.30 - which, let's be honest, is much better than paying all that upfront in one go.

But what about when you want to upgrade your hardware, I hear you cry? Blade say that they will take care of all that behind the scenes at no extra cost. When Nvidia launches their next generation of Volta GPUs (the GTX 10-series is currently called Pascal), for instance, your Shadow PC will be upgraded automatically free of charge, which will no doubt come as a sweet sigh of relief given the current state of GPU prices.

Other subscriptions will be available as well, including a three-month commitment for £32.95/month, and a Netflix-style £39.95/month one-month option for when you really want to blitz that thing you've really been looking forward to for the last five years over the holidays, for instance, but won't have to time to play again quite so regularly once you go back to work.

Blade co-founder and CEO Emmanuel Freund also hinted to me that there may be other GPU tiers available in the future, too, potentially giving you the option of choosing exactly what kind of components you want to use so you can tailor a subscription to suit your budget. You won't even necessarily have to go for the whole hog gaming package either, as Freund also talked about a light web browsing/office type package for when you just want basic access to your files (videos, pictures, music etc) when you're away from home. 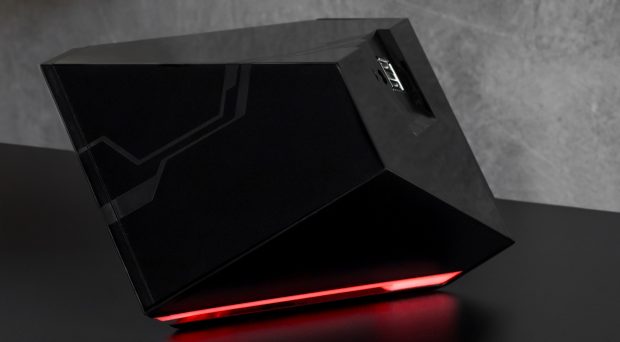 For now, though, Blade's main focus is providing that high-end gaming experience, which is where Shadow's teeny tiny box comes in. Again, you don't technically need the box if you're using Shadow on your phone, tablet, TV or Mac (I was shown Rise of the Tomb Raider running on all of these devices using a paired Xbox One controller over Bluetooth), but for those that want the full Shadow experience with a proper monitor, mouse and keyboard, the box is an absolute must.

Powered by an AMD APU, the box allows for 1080p gaming at up to 144Hz (or 144fps) for those with high-refresh rate monitors, or 4K gaming at 60Hz - that's something that no other cloud gaming service currently offers. Measuring 190x184x110mm and weighing just 680g, the box also comes with a number of ports for all your various peripherals, including two USB3 ports, two USB2 ports, an Ethernet port, two DisplayPorts, separate headphone and microphone jacks and a power port for plugging it into the mains. You also get a bundled HDMI adapter just in case your monitor doesn't have a DisplayPort input.

In the flesh, it's a pretty smart and sleek bit of equipment. Perhaps a smidge space-age looking for my tastes, but I'd much rather have this on my desk and never have to worry about cleaning another fan filter ever again than have to constantly worry about my cats chewing all the cables snaking around the floor and accidentally electrocuting themselves.

You have to pay a bit extra for the box, all told, but a one-time fee of £109.95 to buy it outright is hardly going to break the bank in the grand scheme of things. You can also rent one for £7.95/month, which comes to roughly £95.40/year, if you prefer. Alternatively, if you're one of the first 500 people to pre-order a Shadow in the UK, Blade will lend you one for free (although you should note this is only a loan and will need to be returned should you end your subscription). UK pre-orders open today, if you're interested.

The best part is you don't even need a particularly fast internet connection in order to use it. Blade recommends you have at least a 15Mbps download speed, but Freund told me you can still get a decent 60fps gaming experience at 1920x1080 with just 5Mbps. You'll need a faster internet connection if you want to play at 4K, of course, but that's still a heck of a lot more friendly and accessible than Nvidia's recommended 50Mbps connection for just 1080p gaming on GeForce Now.

Indeed, Freund conducted my entire demo over a rather shoddy public Wi-Fi network in a shared office space, which was also being used by dozens of other people outside the showroom. This made it all the more impressive when I was able to play something as demanding as the opening scene from Rise of the Tomb Raider through Shadow's decoder box with no signs of any lag whatsoever. Admittedly, I wasn't able to see what kind of graphics settings he'd chosen, but it still looked like a decent level of quality. Things got a bit hairier when he switched to Shadow's phone and tablet app - here, latency was such an issue that I'd call it practically unplayable - but I'll be giving all this a proper test once I've got one in for review.

Still, provided Shadow's mobile apps end up being just as stable as using the box, it's a pretty tempting setup. If I'm playing something on the TV through the app and my partner suddenly comes in and wants to watch something, I could just carry on with a tablet or my phone in the same room, or go upstairs and turn on the box and pick up where I left off. The time it takes to transition between each device is Nintendo Switch levels of instant, too, and watching Rise of the Tomb Raider bounce from a 5in phone screen to a 55in TV in about two seconds flat is immensely satisfying. If Nintendo hadn't done it first, I'd have given Freund a round of applause.

It's worth noting that Blade's Shadow app is only available on Android TVs at the moment (that is, Sony and Philips TVs), but Freund said that developing apps for LG's webOS-based TVs and Samsung's Tizen-based TVs wouldn't be out of the question further down the line. There also isn't an iOS app right now, but this is currently in the works and will be available soon, along with a new mobile UI called Shadow Beyond that aims to make using Windows on smaller screens a bit easier, such as giving you better, more intuitive access to your videos, music and photos without having to go through the ordeal of using Windows 10's touch interface.

The subscription prices sound like a lot compared to what we're used to paying for things like Netflix and Amazon Prime, but given the breadth of what you can with access to a powerful PC, a better comparison might be how much you pay for your phone contract. Think of it that way, and it starts to sound a lot more palatable - and a valid option when the alternative is forking out £1500 all in one go.

If Shadow gets it right, it could even be a viable long-term solution to the current crypto-induced madness surrounding today's ludicrous GPU prices. I know I'd rather pay £30/month for a GTX 1080-powered PC than stump up £650 to upgrade my current card, especially when the rest of my PC is starting to look a bit long in the tooth as well. As I said, I'll need to test Shadow properly before I can give my final verdict, but for now, count me very much intrigued.