There's been a murder. And no one seems to have noticed. One of my favourite ever games, released during the peak of PopCap's glory days, is simply gone. Not just no longer on sale, but seemingly erased from history, from the current timeline. Bookworm Adventures (and it's sequel), the adorable word-spelling combat game, has been Shazammed right out of existence.

Back in the very early days of RPS, a little game called Peggle was released. All 18MB of it. A file size that became peculiarly important to the site for a number of years - for reasons implausible to explain it became the international unit for measuring demo sizes. We all loved Peggle, because we weren't mad. But there was one of us that preferred another PopCap game at the time, and that handsome chap was me. If I had to keep one, I'd have trodden on Peggle to save my Bookworm Adventures.

It's hard to believe just what an extraordinary hit factory PopCap was back in 2007. Even more so the breadth of their appeal, somehow ingeniously presenting themselves as both a "casual games" outlet releasing across all those super-mainstream sites like Big Fish, and a specialist company who were incredibly early to get their games onto Steam. Probably most broadly famous for Bejeweled, they were putting out a mix of so many game types, from hidden object to arcade to pachinko, managing to blur the fiercely guarded line between "casual" and "hardcore". So much so that there was even a crossover special edition of Peggle in Valve's Orange Box. Yeah, bet you forgot that one! And while perhaps their peak crossover moment came with Plants Vs Zombies, moments before they were bought by EA, for me my favourite will always be that wormy word game. 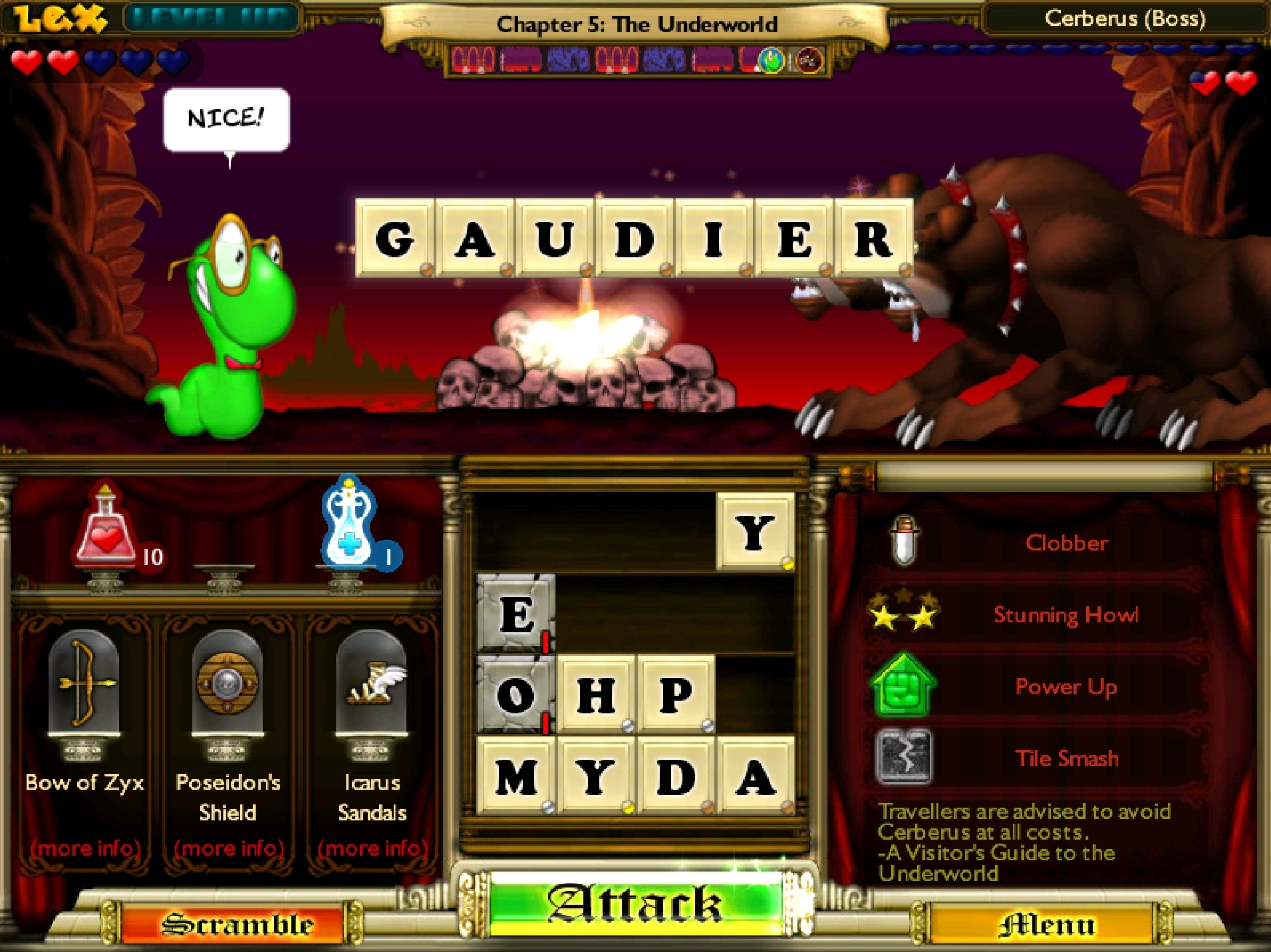 There was a game before it, Bookworm, a more traditional puzzler, that honestly isn't very good. But Bookworm Adventures transformed it into something so damned weird that it could only be magic. You play as Lex, a sesquipedalian worm, who is sent inside a library book to attempt to rescue Greek mythological heroine Cassandra. Yeah. That. To do this, you must of course spell out the longest words you can from a 4x4 grid of lettered tiles, the formed words used as a weapon against the story-themed enemies, beating the crap out of them.

As you progress, the tiles become cracked, poisoned, concrete, etc, and different letters are worth more when used in words. And yes, if this is sounding incredibly familiar despite never having played BWA back in 2007, it is also the exact same setup as 2014's Letter Quest: Grimm's Journey. 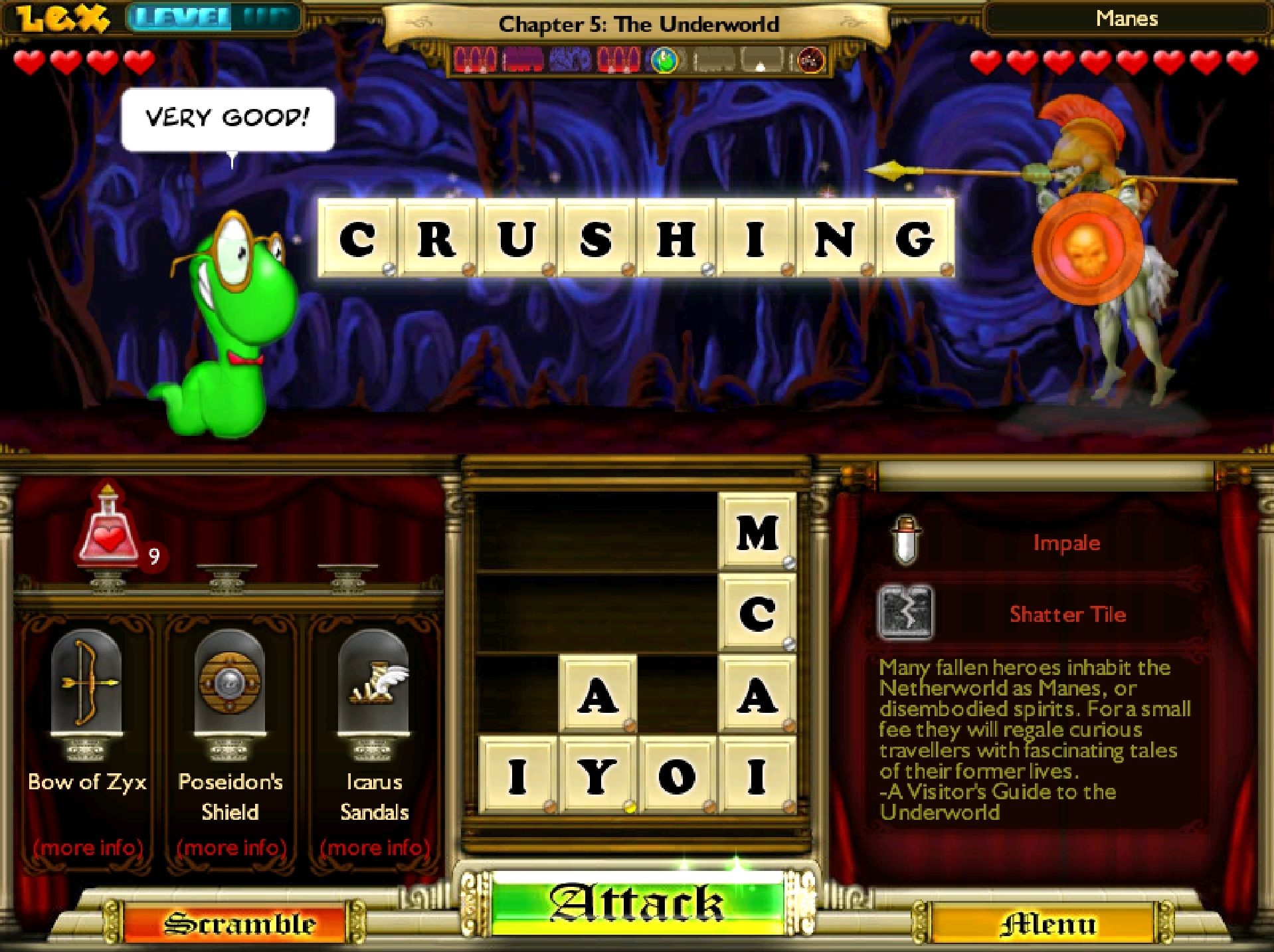 As it happens, it was playing Letter Quest on my Switch with the boy that reminded me how fun it might be to dig out Bookworm Adventures for this column. I could replay a well-loved game, and bring up the old RPS rivalry between it and Peggle, and celebrate how funny it was, and how brilliantly it noticed thematic words. It'd be a nostalgic, smile-inducing article about something good and pure. So I typed the name into Steam to get to its store page, and... nothing came up. Which was odd, since it was on Steam from the 2nd January 2007, and I'd always played it there since. Oh for flip's sake, I thought to myself, bloody EA. It'll be stuck on Origin for no good reason, won't it?

So I blew the thick layer of dust off of Origin, loaded it up, waited for it to break a few times, loaded it again, and searched for it there. And nothing came up. Huh. I then went to what I'll loosely call "PopCap"'s website, to see if maybe it was at least on mobile? Probably reprogrammed to have you have to pay microtransactions per word spelt or something. But the word "Bookworm" doesn't appear on the mutilated corpse of PopCap's website anywhere. It's erased from their history. It's erased from everywhere. 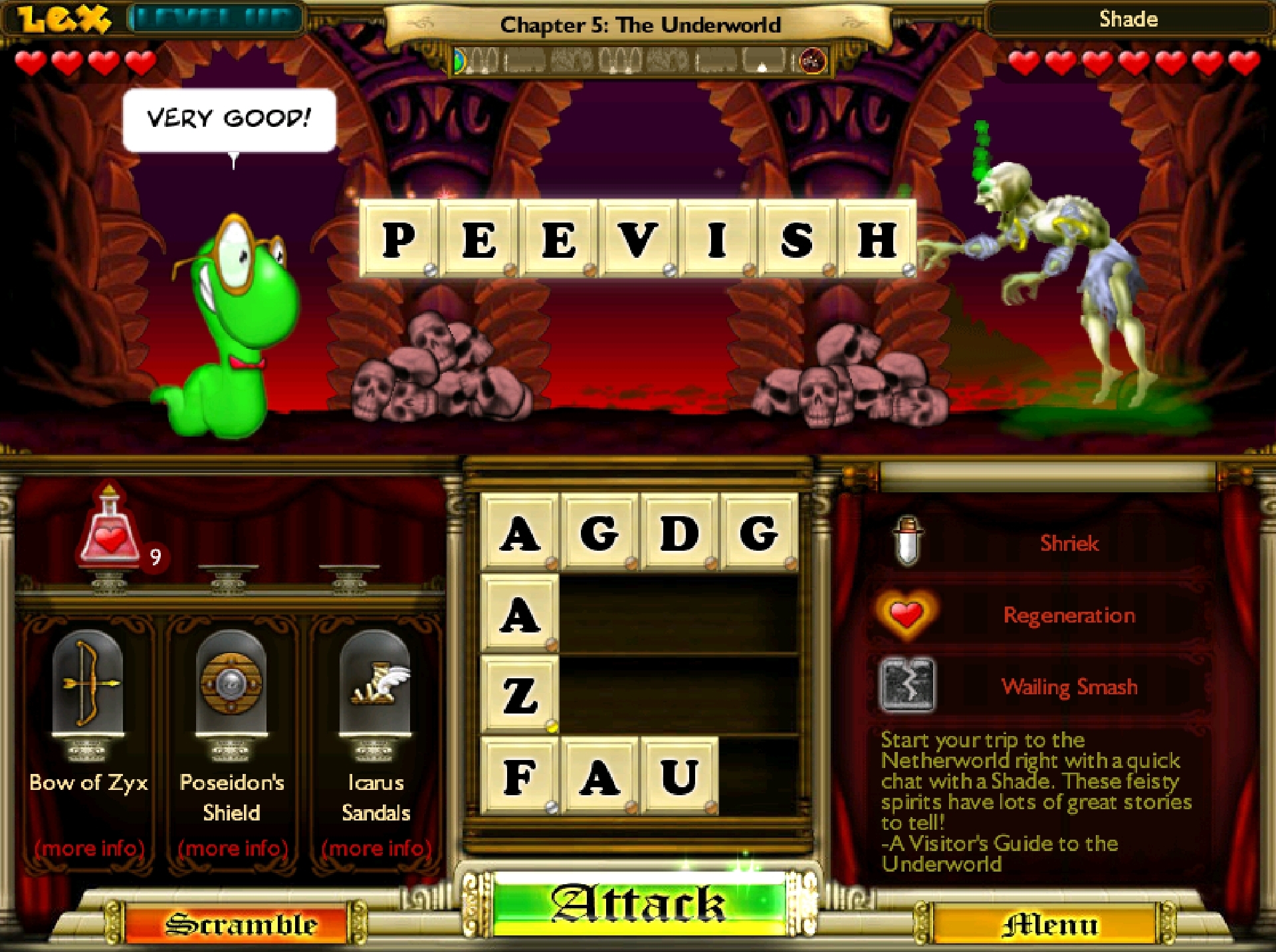 Fortunately, when you own something on Steam it's pretty hard for it to be taken away from you again. So I was able to install it from my library, despite the link to its store page redirecting you back to the front page. I ran it, and... some strange message about "steam.dll" being unfound. Nooooooo! Surely their madness wouldn't extend to deliberately sabotaging the digital remains of this peculiar, inexplicable killing? In the end, copying the steam.dll from Steam's main directory into the BWA directory "fixed" this oddity, and the game launches! Hoorah! It does still exist! Albeit as a ghost.

So why? Why on EARTH would EA go to such lengths to destroy one of the most innoccuous games ever created? I mean, if there had been some harebrained scheme to erase the pre-existence of EA's ownership of PopCap, to carve some Stalinist revision of history where the only franchises that remain are those fully massacred with microtransactions and mobile advertising, then it would at least make some half-sense. But no, the rest of PopCap's peculiar collection is up there on Steam to enjoy. All those SpinTop hidden object games (always the best of the form, for my money), peculiarities like Typer Shark Deluxe and The Wizard's Pen that no one has ever heard of, they're all there. Origin goes back even further with PopCap's first ever game, 2001's Alchemy. 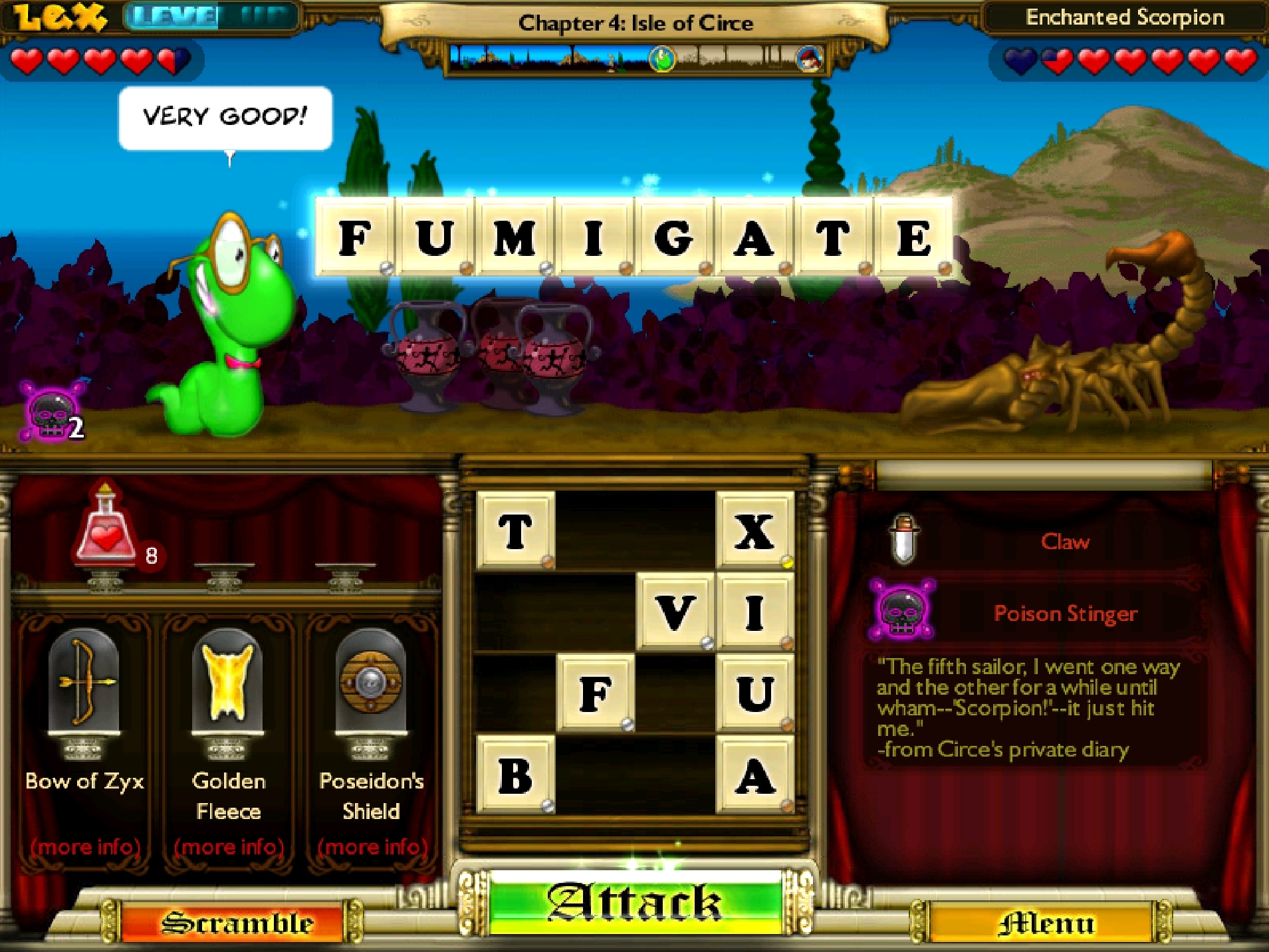 So here begins my conspiracy theory. And I come back to Letter Quest. Even at the time I commented on just how peculiarly similar the game was to Bookworm. Like, in almost every detail. LQ had a 5x3 grid instead of 4x4, and added some extra challenge modes, but after that it was pretty tricky to tell them apart. So why on Earth wouldn't a company like EA have sued them into outerspace? It was a blatant lift of Bookworm Adventures. Yet, rather than being buried in lawyers, two years after its original release, developers Bacon Bandit Games put out a remastered version. Two years later was 2016, the same year Bookworm Adventures was deleted from our timeline...

Well, no. Clearly that's complete nonsense. That's because conspiracy theories are always bollocks. I spoke to people who know people, and there's no connection at all. OR SO THEY CLAIM. Accurately. THEY SAY. (Because it's true.) 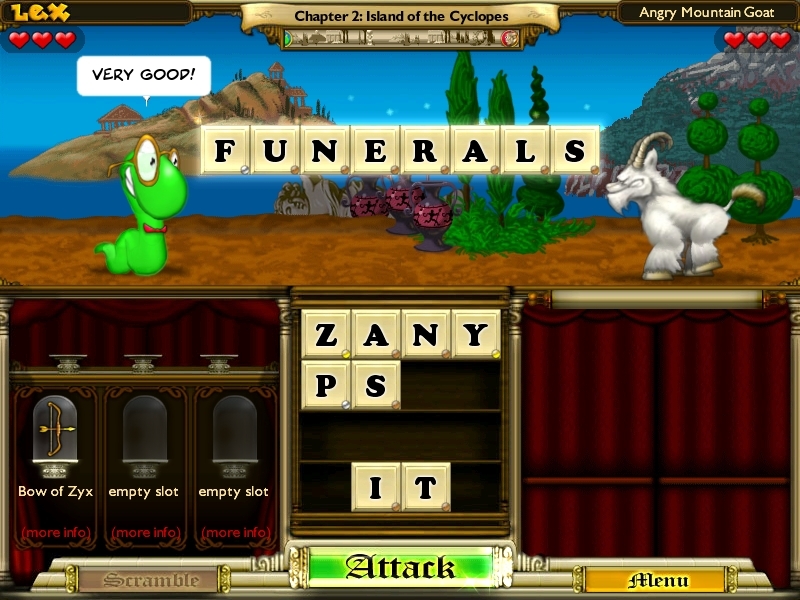 I have also reached out to a couple of the original PopCap team who worked on the game, and they are equally confused about what's happened. No one knows anything. And to Bacon Bandit Games to ask if they know anything about it, to put my idiotic conspiracy to them, so if I suddenly go quiet and am erased from the internet, well, you won't be reading this and I'll be DEAD. Who knows how deep this goes people?

And of course I contacted EA to ask them if they could just solve the mystery. Twice. No reply came.

In the meantime, it's incredibly sad that you can't play Bookworm Adventures any more unless you bought it in the past. I mean, of course the Internet Archive has a single lone copy preserved in a glass case, and you could perhaps, er, go and stare at it admiringly? Hint, hint. It is genuinely the better game over Letter Quest, despite the latter's extra features, because it was so much more cheeful and charming, which was so much of what made it special. But Letter Quest is still great, mostly by being nearly the same game, and that's still on sale everywhere. FOR NOW.

Can I still play Bookworm Adventures?

Only if you bought it before 2016. Or, if you were to, I don't know, accidentally click on a button on this website.

Should I still play Bookworm Adventures?

If you can, then gosh, yes! It's so delightfully silly and happy and adorable. And you get to feel smart for spelling big words.