Recently Alice0 has been telling us all about Blaseball, which is a free browser game simulation of a baseball league. Except it is called Blaseball and everything is weird. I started playing this week with the start of the 4th season on Monday (a new season starts every Monday and concludes on Fridays) and have found two things to be true.

The game you actually play is a betting league, really. You pick a favourite team when you first sign up - I picked the Crabs, obviously - get a pool of coins to start, and bet on the next fixtures coming up as the previous ones play out in real time. I have absolutely zero understanding of this aspect because I have zero understanding of actual baseball, let alone a text only variant played by an assortment of cryptids. I am also bad at the betting bit. My main rule is that I always bet the max on the Crabs in whatever game they're playing, no matter their chance of winning. As a tactic this is not going so well. The Crabs, while they are obviously the best team in the entire world, are fair-to-middling at the game. 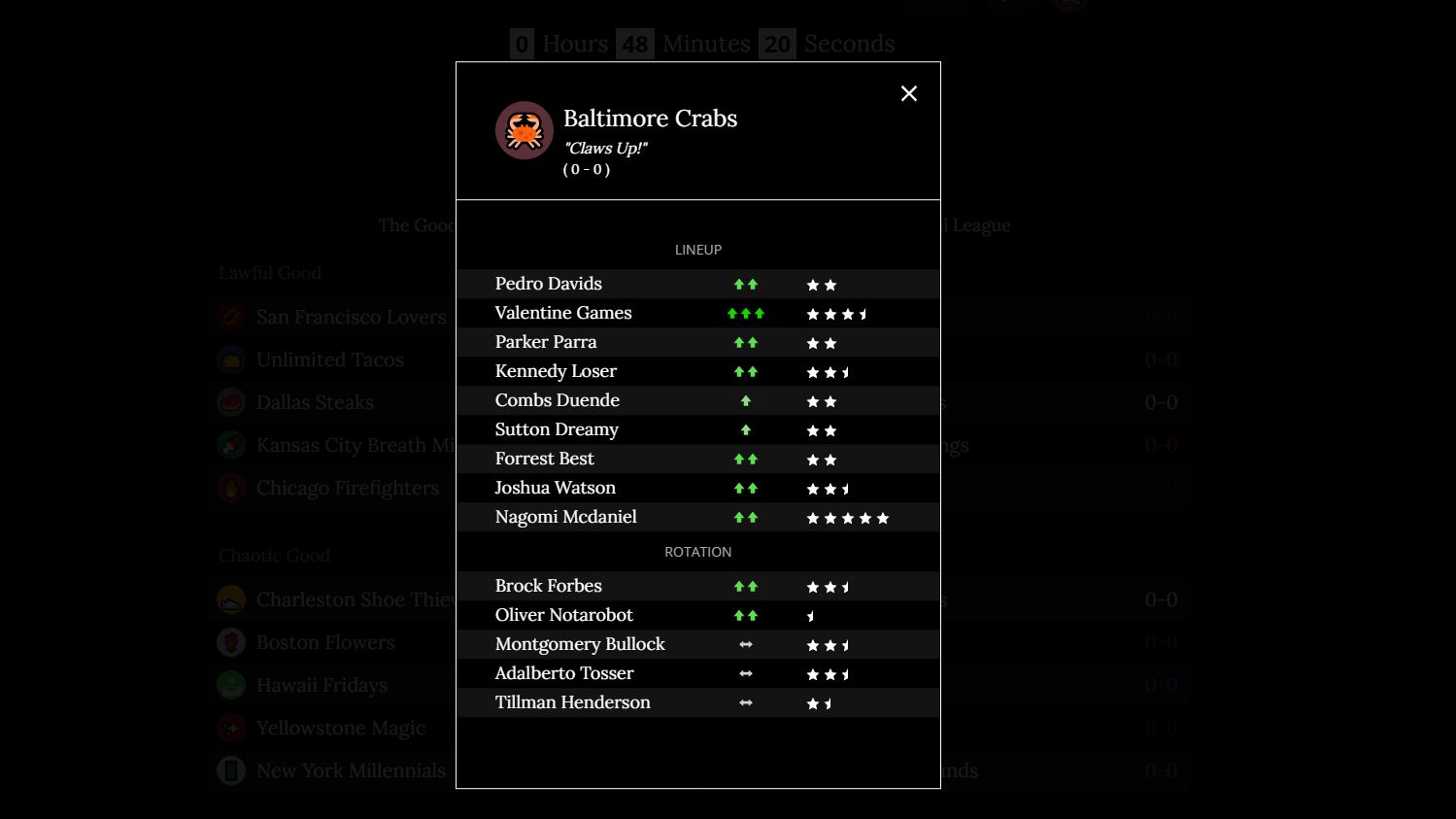 Luckily, though, it hardly matters how good you are at the actual Blaseball.com bit of Blaseball, because actually Blaseball is mostly played on Twitter. I do not understand this part of it either, but I really fucking like it.

Blaseball itself cultivates a weird vibe from the off, which you easily slip into. The website has a ticker at the top which scrolls messages like "NO THOUGHTS ONLY BLASEBALL" and "THE DISCIPLINE ERA CONTINUES". The players themselves have names like Valentine Games and Nagomi Mcdaniel, and blood types like grass or basic. With prompts like this, who among us could resist the lure of the community created Blaseball extended universe?

Alice0 already talked about how strange and fabulous the fan art is (although, shout out to this art of star hitter Mcdaniel, who transferred to us from the Breckenridge Jazz Hands and as part of that process transformed into a majestic and beautiful crab beast), but it would be a mistake to assume that's all there is. I should note, too, that Blaseball is funded on Patreon and that there is a Blaseball discord as part of this, which I am 100% sure is the secret wellspring for a lot of this.

All you need to do is sit on the #blaseball tag and watch it scroll. It's beautiful. Even though Blaseball has only been a thing for about a month at this point, but there is a Blaseball News Network. There are Blaseballsonas. People ship players from rival teams. Owen Picklestein from the Boston Flowers is apparently dating Pedro Davids of my beloved Crabs.

Almost all the teams have a Twitter account, and star players often have one as well, including Jessica Telephone, an extremely cute but unstoppable and eldritch talent currently playing for the Tigers. The Hellmouth Sunbeams feed often live tweets games, and has what I would term big weird energy.

As Randall Marijuana scores a solo homerun to seal a 10th inning Hell Series victory against the Tigers, the clouds above Hellmouth Stadium twist. For a moment, if you squint, you'd swear that you see the face of Rhys Trombone, smiling. #blaseball

The Tigers, by the way, are the Hades Tigers. They're the top team in the league and their players' star ratings combined basically make them the Man United of Blaseball. But Blaseball also allows you to vote on new rules that kick in for next season, and this week one of them is Tame The Tigers, which would randomly distribute five top Tigers players throughout the rest of the league. The crabs are in the same side of the league as the Tigers, so our official unofficial Twitter account is going all in on the campaign to Tame The Tigers. We have stats and everything, fuckers.

Blaseball-specific memes have already arisen. Players can switch teams randomly in the middle of a season due to 'feedback' occurring during a game. Whenever a new player joins the Crabs, the call is "I'm the crab guy". I am not sure when or how many of these things started. It's sort of like deciding to start watching Eastenders now without any context, or joyfully leaping into a broiling mess of salmon swimming up stream, except the salmon are all crabs and now I am a crab and we're all yelling "Claws up for trans rights!"

There are no rules for playing Blaseball on Twitter - apart from have fun, be weird, don't be mean, which are unwritten but, as far as I can see, adhered to by everyone. This means that Blaseball fandom is nice (every Sunday is #BlaseballCares, for example, which signal boosts new charitable causes each week. One of them this week is to fundraise for a Crabs community captain whose house sadly burned down). But it is chaotic and wild and scrappy, like a bunch of kids running off their own baseball cards in basements using chunky felt-tip pens. Perfection is not required in your art, only in your zeal for your team.

It also means that a bunch of seemingly incompatible visions for what the players and teams are like can all exist at once, with the deciding factor usually being which do you, personally find hotter as you are looking at them. Are the Baltimore Crabs a team of half-human, half-crab hybrids? Are they just all literal crabs? Is our player Oliver Notarobot a robot or not a robot? All can be true, and yet none. I'm considering going back on Twitter just so I can join in with it all. Because one thing is always true. It is immutable.