If you click on a link and make a purchase we may receive a small commission. Read our editorial policy.
Past Perfect was a retrospective column in which we looked back into gaming history to see whether old favourites are still worth playing today.

2011's Bulletstorm feels like such an oasis of violence and childishness in these current times of nu-puritanism. As someone who was there at the era it harked back to, reviewing games in the late '90s, early 2000s, it feels odd to now be almost nostalgic for those days of wanton unpleasantness, when being rude had yet to be classified as a war crime under the Geneva Convention. At the time I was so damned sick of it, rolling my eyes at your Soldier Of Fortunes and feeling exhausted by the immature antics of self-declared "troublemakers" like Take-Two. As gaming was mired in that sort of second wave of misogyny, ultra-violence and sweary derring-don't, we were all desperate for something... nice.

I'm going to make the declaration: games are far too nice now. I'd like some more offensive games please. 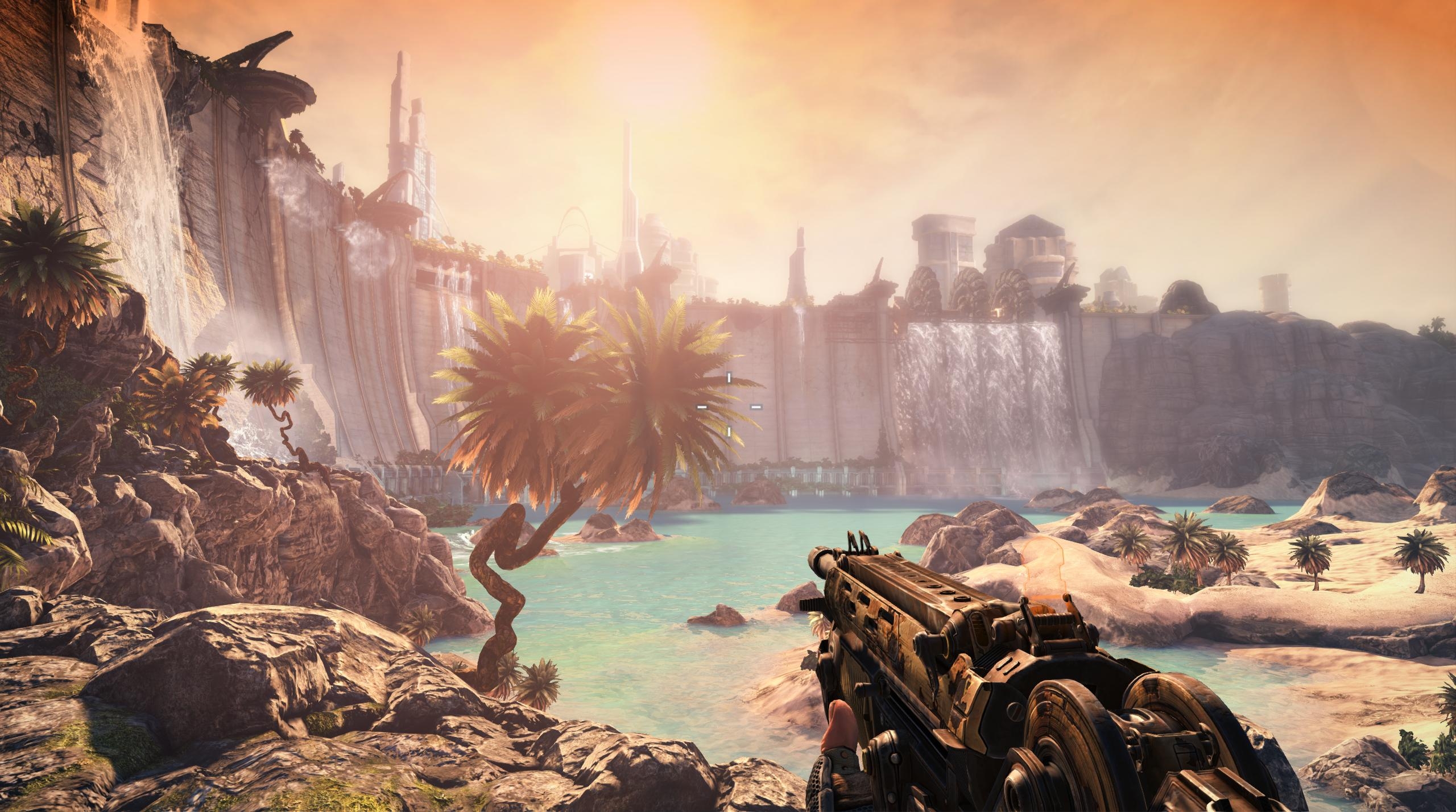 Don't worry, I haven't taken leave of my senses. This is not some alt-right appeal for gaming to return to the cesspit of sexism and racism that it once was. I didn't spend the last twenty years raging against that sort of drivel because I was a fan. I just want them to be rude again. I want to laugh out loud at how revolting the language is. What I'm trying to say is: I want more dick jokes.

Bulletstorm has lots of dick jokes. It has Jennifer Hale bellowing, "Go fuck yourself! You shit piles give chase, I will kill your dicks!" To which Steve Blum's Grayson Hunt (who was surely modelled on Proteus designer Ed Key) replies, "What? What does that even mean? You're gonna kill my dick? I'll kill your dick! How 'bout that, huh?" Poetry.

Developed by People Can Fly, but under heavy influence from Epic, Bulletstorm was a return to the violence-first, story-perhaps-maybe-sometime-later, first-person shooting that had felt very absent for a long time in 2011. Things were either multiplayer first, or so story-heavy that they dragged you with fishhooks up your nostrils down their corridor, turning your head for you to make sure you watched the scripted everything. Its selling point was the gruesomely violent ways you could kill the enemy, letting you kick the humanoid aliens into walls of spikes, or laser-leash their bodies into electric wires, each accompanied by an innuendo-laden pun on screen. The more elaborate ways you kill, the more points you accumulate, letting you buy new weapon unlocks, extra ammo, and more violent ways to kill the next lot.

It does this all so very, very well, letting you run at a tremendous pace, dish out your brutality with eager aplomb, stringing together disgusting attacks and grim deaths. It's adult in a superbly childish way, a big stupid lump of fun, and crucially, executed supremely well. 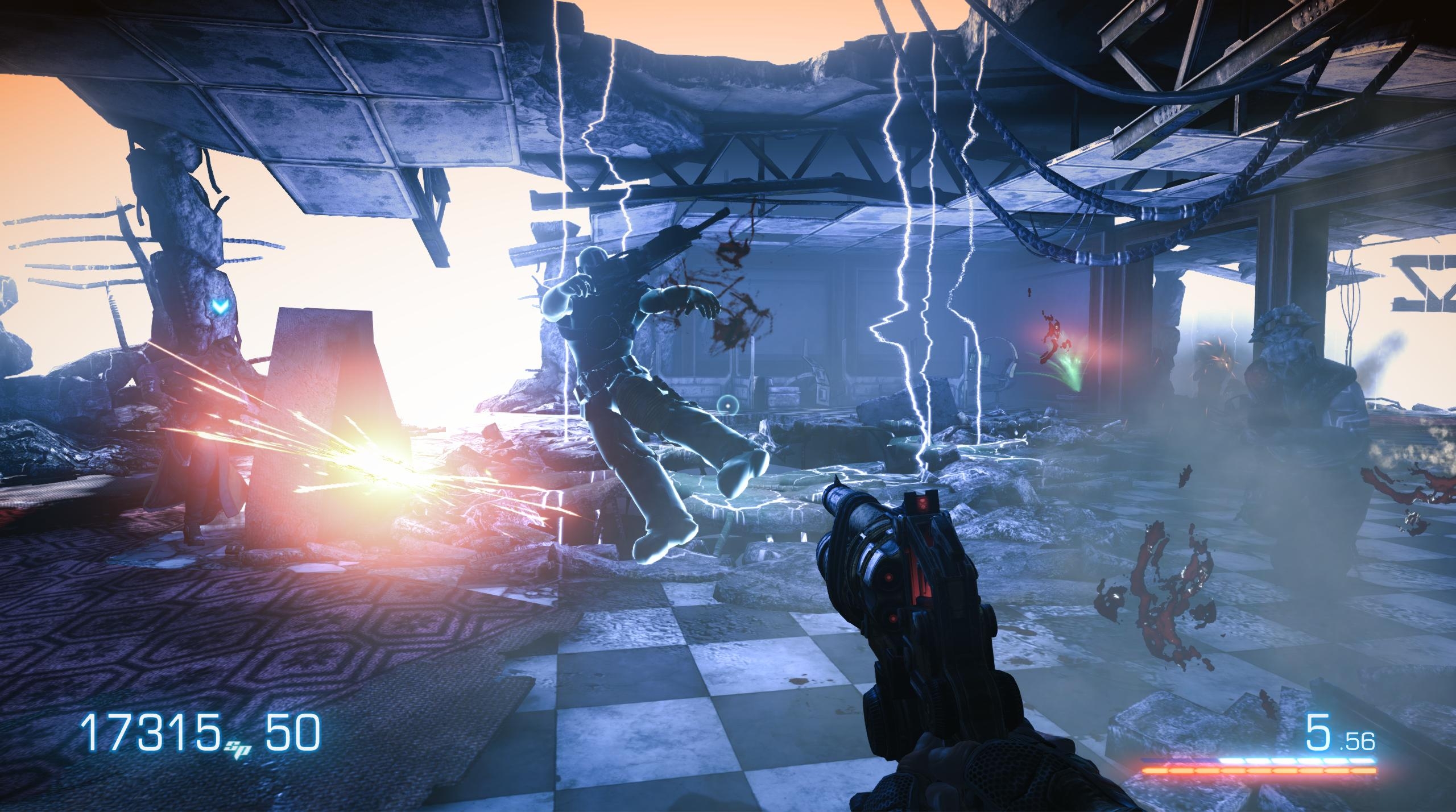 Of course, Bulletstorm is unquestionably sexist, and a lot worse off for it. It's even poorer for being the sort of sexist that thinks it's being all progressive. Hale's Trishka Novak is supposed to be the sort of hard-assed female character that shows how much developers respect women. She then of course has to be rescued, is always presented as "other" from the "normal" of the men, and perhaps most insidiously of all, is endlessly trumpeted as "just as good as" - surely the most tedious and perfidious of all the misogynistic tropes. "Look, she's just as good as one of the boys..." as if being as good as a man is something women have to aspire toward, and can only be achieved by emulating 'male' behaviours. Strong Female Character in gaming is almost always "Woman Who Acts Like Dude, But Has Boobs".

There are also some uncomfortable lines in there, including using "retard" as a derogatory term. There are the "Ew, gay!" lines that appear to be part of absolutely everything written pre-2015. And a bunch of 'ironic' racism, where the baddie uses a collection of slurs against the Japanese character. He's a prick, is the point they're making, but, you know, terribly. It's tempting to say all this would be written differently today, but I'd have thought all this would be written differently in 2011. The point is, in their attempts to portray characters as being unreformed machismo stereotypes, they got to just write a bunch of crappy things. 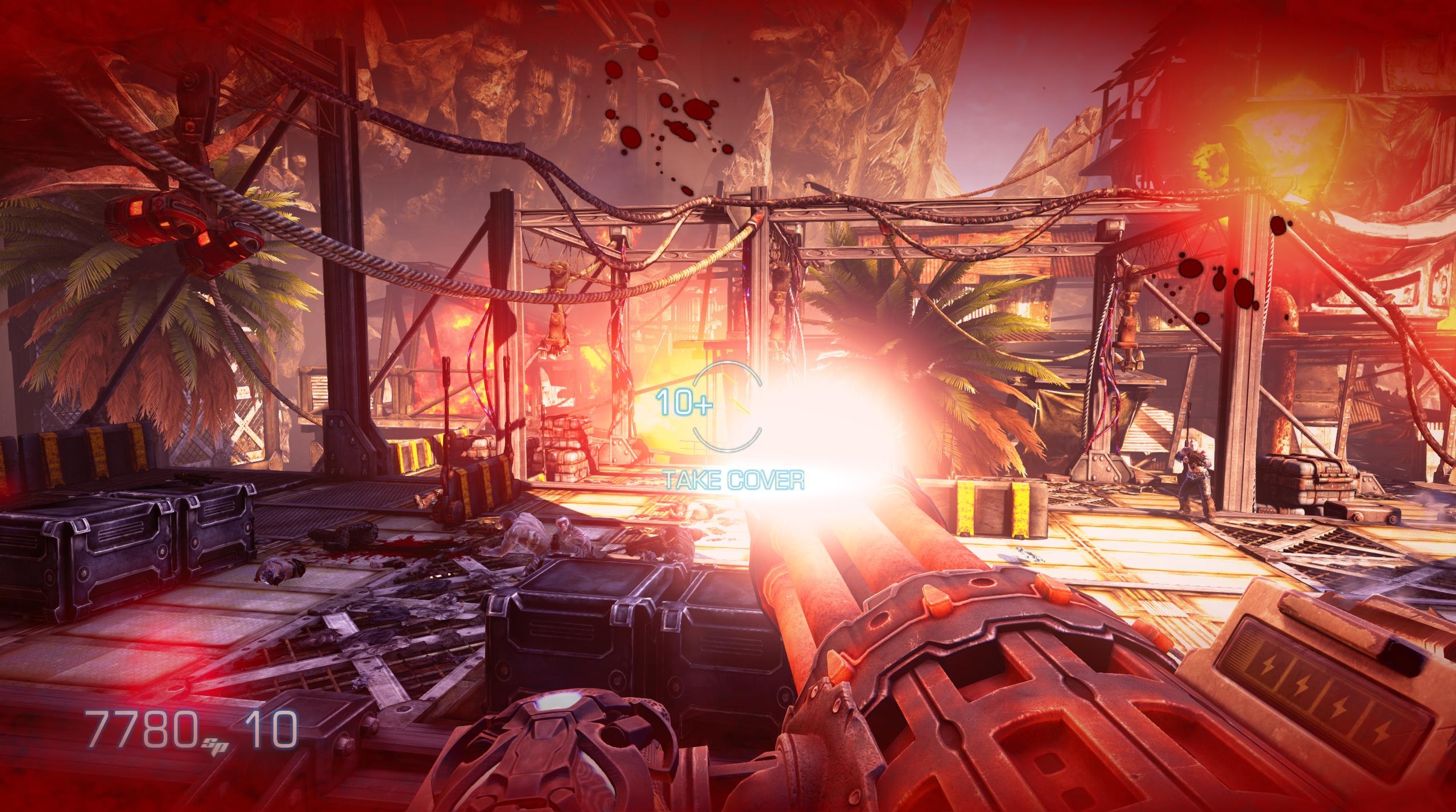 "What kind of clock are we running?"

"One that has been recently fucked in the face."

And those are simply good lines. And we must appreciate them. 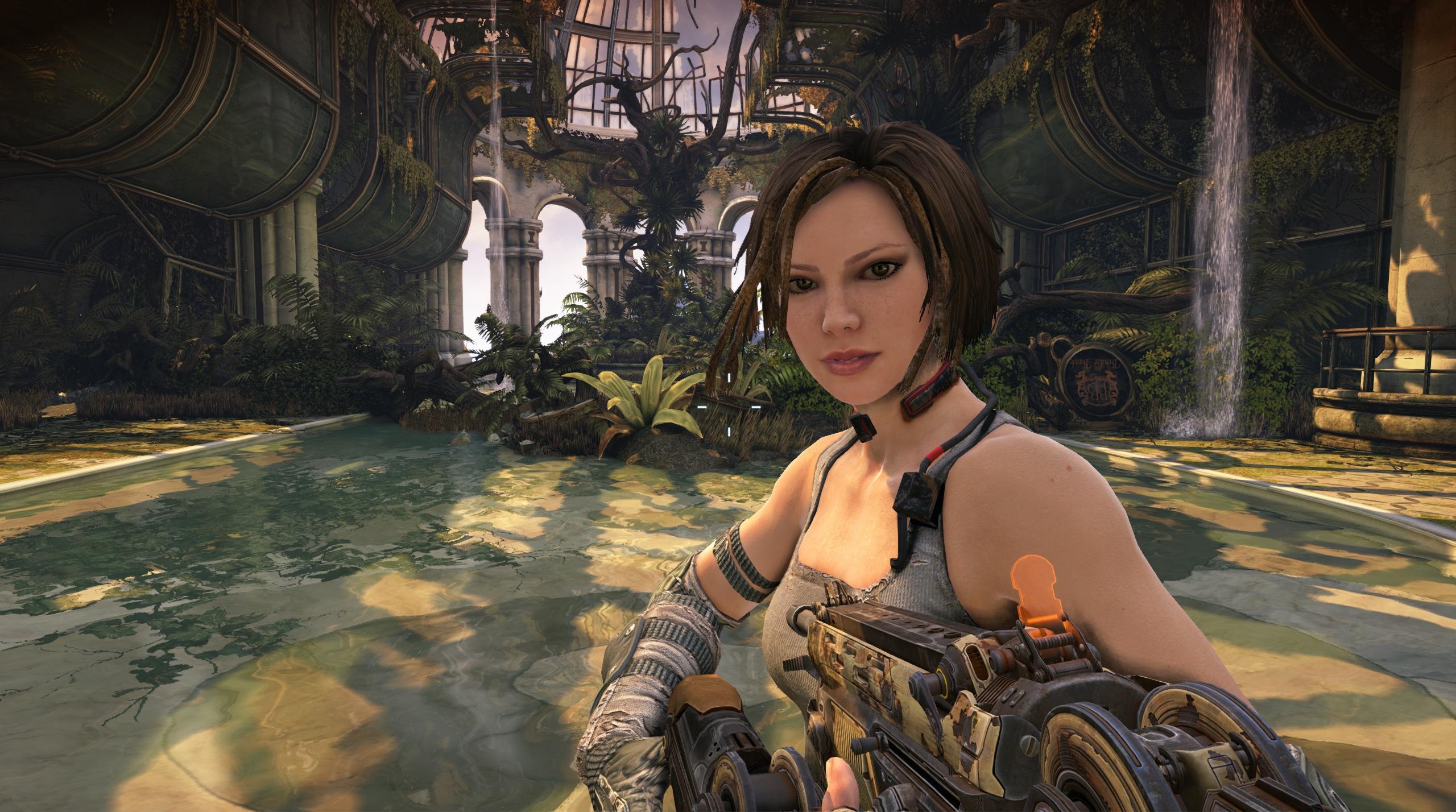 As it happens, Bulletstorm slightly outstays its welcome in its six-to-eight hour campaign. It's one act too long, all its jokes used up, the player progress already completed, as it devolves into a series of scenes as our intrepid trio try to kill the mean baddie over and over again. At this point it's interesting to note that the heavy-handed writing stops being fun or funny, and just becomes hard work. Yup, he said "dick" again. Yup, he said a sexist thing to the lady again. Get on with it.

Which is to say, Bulletstorm is great because of its action, and how rude and unpleasant its action is. It would be, I think, a better game overall if you just turned all the voices and subtitles off completely, even if I would miss some of the more stupendously foul-mouthed tirades. Playing it helps me refine what offensiveness I miss, and what I absolutely do not. Life's shitty enough without cartoon video game characters making faux-ironic racist remarks. Women are still too abysmally represented in AAA gaming for it to be a jolly old time to see one of them getting told, "I always wanted to fuck you," by the game's big bad. It makes me sad to see all this, stinking up the splendid gore, the more enjoyable tone of crassness, and the appallingly great violence. And it's that violence, that silly childish-but-adult glee for being viscerally awful, that I miss. I want big, dumb games, that have nothing important to say, and are going to say it in the loudest, dumbest way possible. I want it to be offensively stupid, not stupidly offensive. 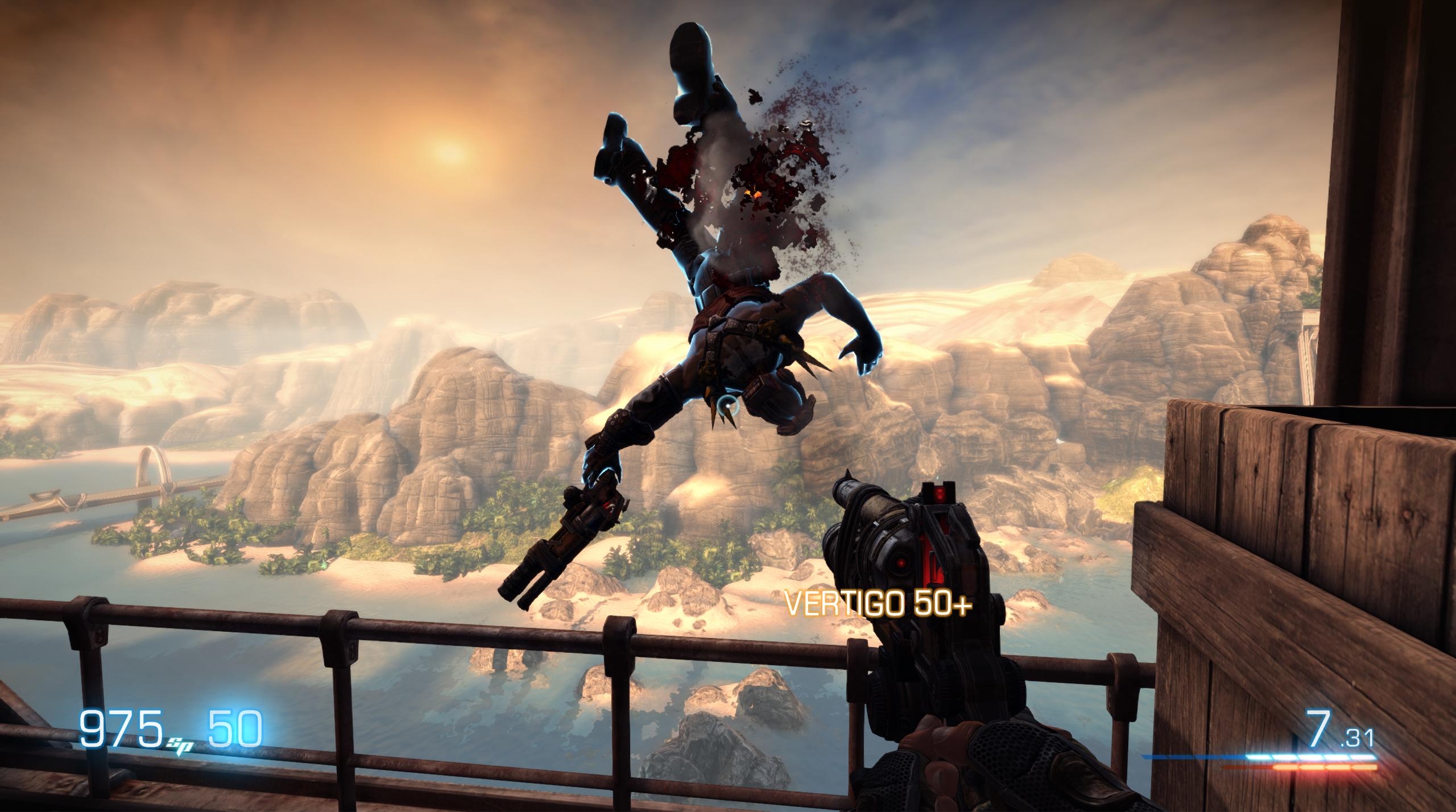 Of course, Bulletstorm will always have a soft spot in my heart thanks to the sheer idiocy that was Bulletstormgate, one of my favourite series of articles I ever wrote for RPS. There have been few moments as rewarding as when that incompetent and fatuous hack tried to argue back, condemning us in the strongest possible terms for doing proper journalism. Those were the days.

As for the game today, it's a shame it ends so weakly. The first two-thirds are just so much fun, the final chunk an increasingly exhausting trudge through the worst of all its aspects, until the final taste it leaves in my mouth is a bitter one. But I immediately restarted it, with the new game plus unlocked once more, and straight back in at the start I was having so much fun all over again. Yeah, I want games to be dumb and offensive, but I want them to be smart about how they do it. Bulletstorm weaves in and out of smartness, and it makes me yearn for something just like this that - well - isn't influenced by the sorts of people who think a game is improved by adding a post-Forever Duke Nukem. 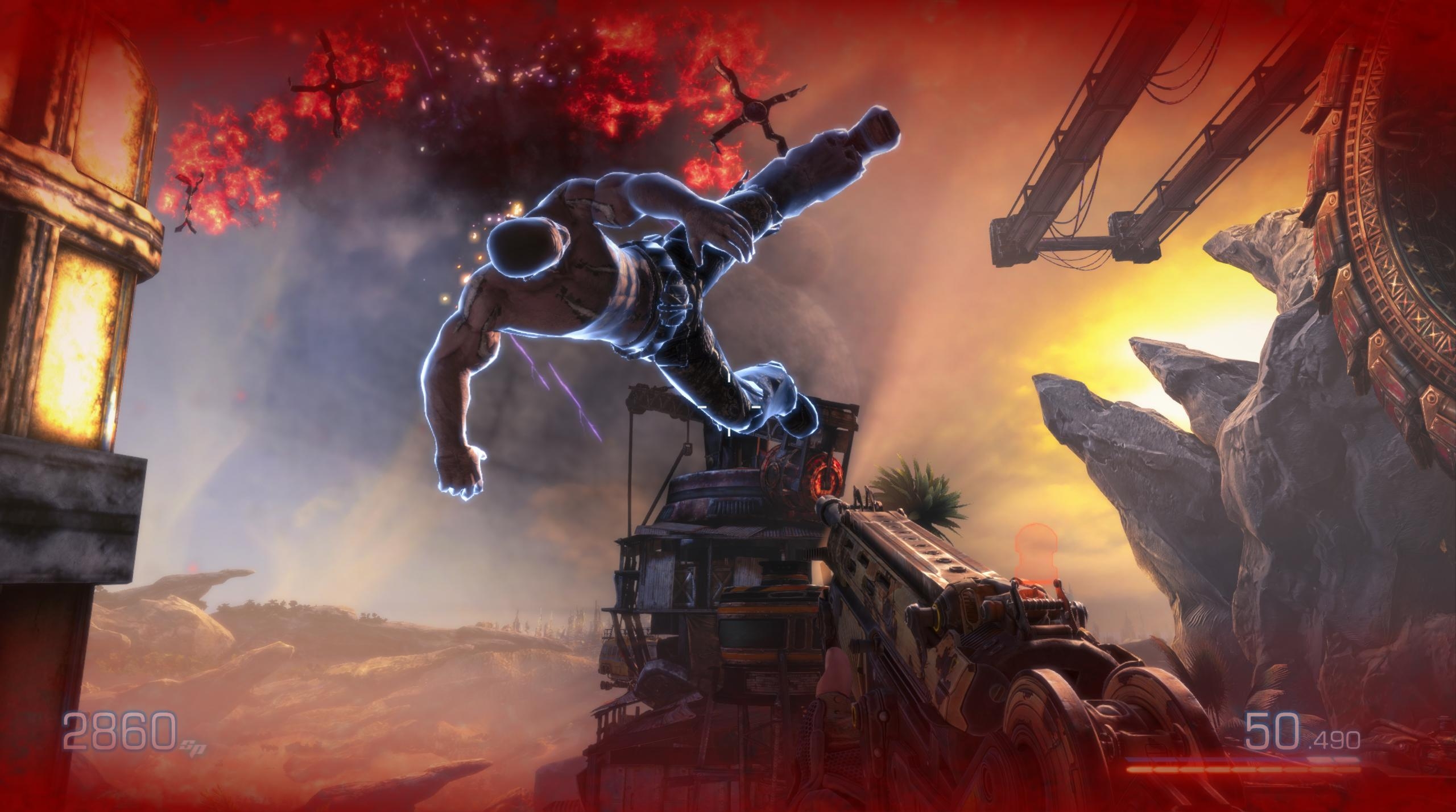 Can I still play Bulletstorm?

People Can Fly released the updated Full Clip Edition in 2017, which for some godforsaken reason added in Duke Nukem as a playable character. Sigh. I tried to find the original to play for this article, but Full Clip has overridden its place in the universe, and heck, it can still be played properly within that. And as such, it runs out-the-box with no issues.

Should I still play Bulletstorm?

For a top-notch violent action game, absolutely. It has some crappy elements, features that it would be a better game without, but it remains superbly fun to play.

John Walker was one of the original creators of RPS, before he was fired for being too great. He now runs Buried Treasure, a site dedicated to unknown indie games. You MUST support his Patreon!