It wouldn't be a post-apocalypse without a diary piece. Cataclysm: Dark Days Ahead is an old-fashioned roguelike that drops you into a crumbling world full of grumpy walking corpses. These zombies may be represented by a shambling ‘Z’, in keeping with the game’s ASCII origins. But they can also be rendered in gooey sprite form for ASCII-phobes. This is a cleaner-looking version that makes grass look (a bit) like grass and cars look (a bit) like cars. It’s still perplexing to a new player like me, but I won’t let an antiquated bunch of keyboard shortcuts get in the way of a good apocalypse. Especially when that apocalypse includes a “skater boy” in the character selection screen.

That list of characters is exhaustive. In this wasteland, you can be a used car salesman or a Rabbi. You can be a basketball player or a ballroom dancer or an electrician. You can be a historical reenactor, a chain smoker, a “shower victim”. Just someone caught in shower when Armageddon struck. They start the game in a towel.

Starting equipment changes according to your profession. The beekeeper starts with honey and some survival knowledge. The burglar has a locksmith kit and a crowbar. But none of these occupations speaks to me as much as the “skater boy”, a role I pick blindly, without stopping to inspect his equipment. I can’t wait to hit the pavement and ollie over the rotting heads of my pursuers, like a post-rapture Tony Hawk. I select some more skills (parkour and quickness, obviously) and start the game proper. That’s when I realise my error. 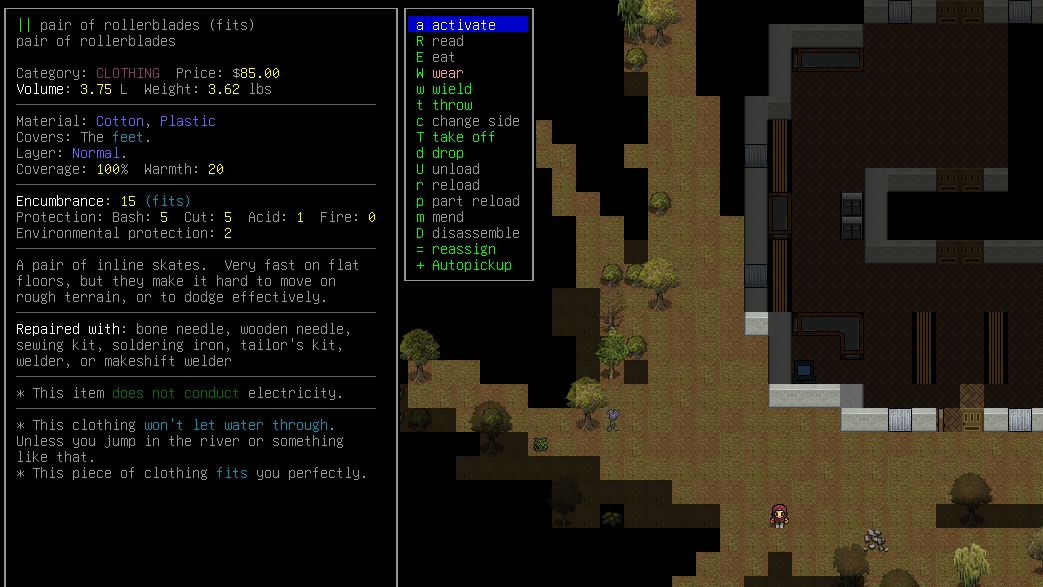 It’s the worst thing that could happen to a fanatic of the board. I am the world’s 44th highest-scoring player in OlliOlli 2, a fact I often tell to friends as we stand on the periphery of the neighbourhood skatepark, eating burgers. I don’t like rollerblades. Also, it’s snowing in this apocalypse, which probably makes any wheeled traversal of asphalt difficult.

I’ve appeared in what I’m guessing is a bomb shelter. I struggle to understand the menus and abilities of my character, and in my confusion I lash out at a local wardrobe. It’s a sturdy piece of furniture though. It feels nothing. Eventually, I understand enough about the game’s archaic user interface to handle objects in a basic way. I blade over to a nearby computer. It says there’s a refugee center nearby and plops it onto my map. 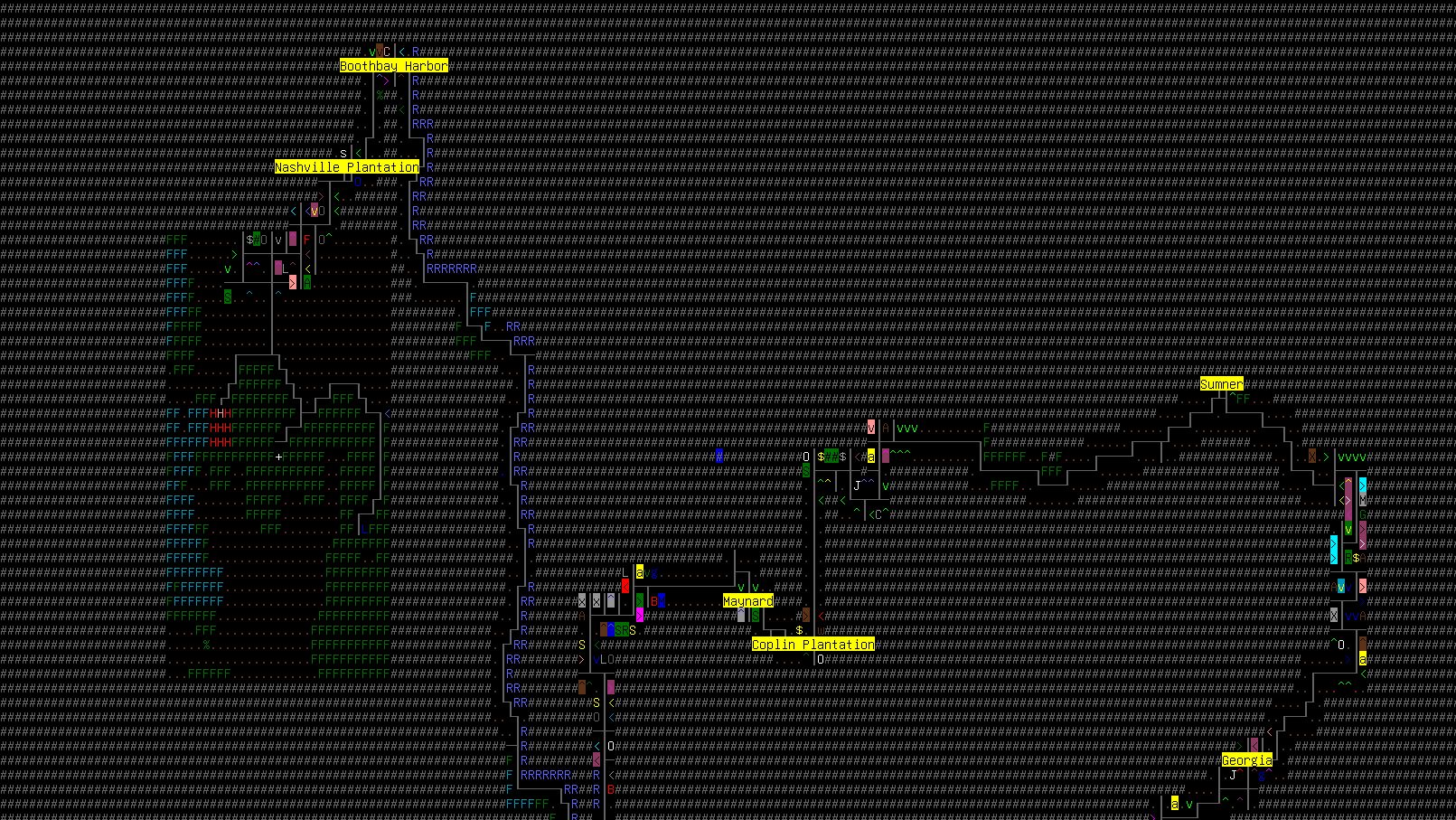 It’s ASCII time. The map is a slew of letters and symbols. It looks like a bomb went off inside the dictionary. We used to have a writer for this kind of game, Adam Smith, but without his expertise I have to translate the map myself. It’s fine, a little cursor helps and you can move it around to see what each small symbol really means. I’ve read that it’s good to get a weapon as early as possible, so let’s see… aha! To the north: a hardware store.

I soon reach the shop in question. I climb a chain link fence into the store’s yard, a kind of open-air shed full of sand and planks. No sweat. I guess a parkour expert such as myself can climb any fence, even if I have wheels for feet, even if it is snowing in flurries. In the yard, I upend a sack of concrete powder and turn the sack into a swag bag. I grab a rebar from a shelf.

“From the northeast,” reports the game, “you hear a clang.” 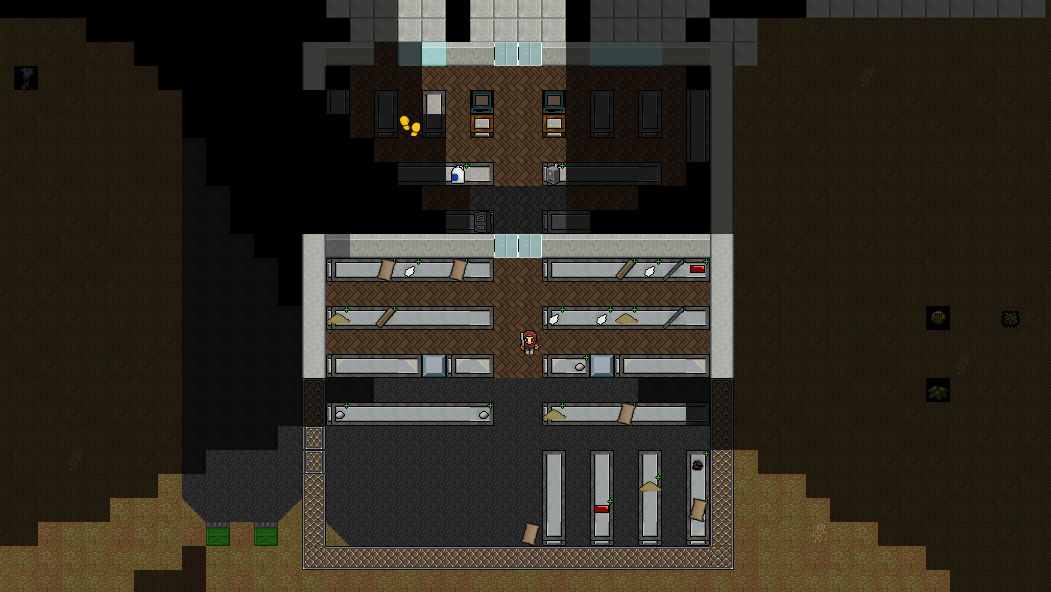 A zombie has barged into the store and is lurching his way past the shelves. I can’t see him, the game obscures anything that’s not within your line of sight. But the yellow footprints in the shadow make it clear he’s there. There’s no reason to stick around. I hop back over the fence and accidentally press some buttons, which inspect the grass in front of me. 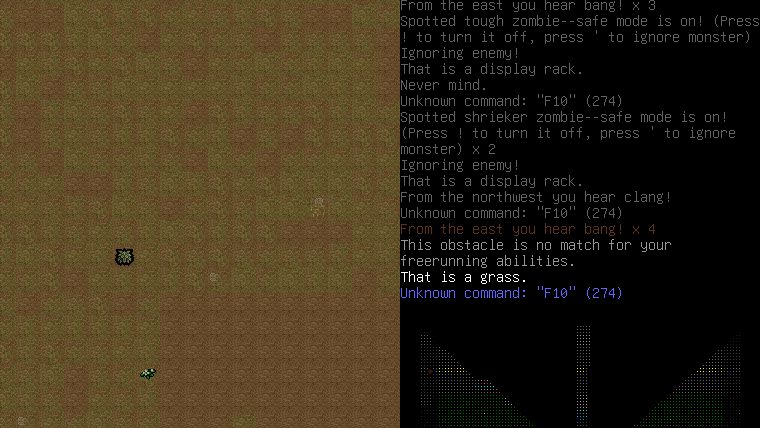 I guess I’m still getting used to the proper keyboard shortcuts. I pick myself up and head back to the main road. As I leave the area, the hardware store zombie (an athletically dead man in football gear) looks sadly at me through the chain link fence, unable or perhaps unwilling to understand the majestic force of parkour.

Back on the road, my rollerblades work well, despite the snow. In my inventory screen, I’m told of a bonus to speed on this surface, but a penalty on grass and rough surfaces. So let’s stick to the roads, I think. Unfortunately, it’s also very chilly speeding down the highway.

“The wind is making your mouth feel quite cold,” reports the game. I get messages like this often. The roguelike’s traditional ticker tape of worries, a log of inevitable tragedy. 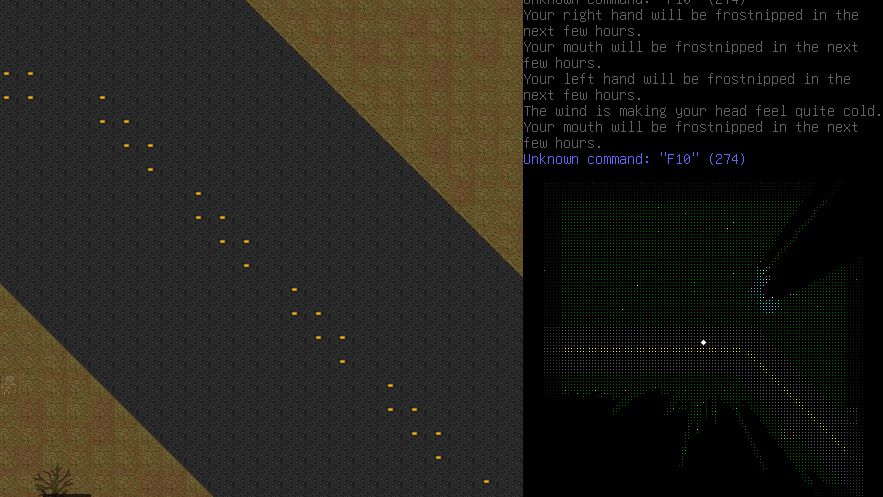 It thinks the beagles living in the woods are monsters. This is because “safe mode” is on. Whenever any enemy or ‘hostile’ animal comes into sight, the game freezes and lets you know. To ignore it and continue, you have to press a little key. Much later, embroiled in a hive of beavers, I will turn safe mode off because of the constant interruption to my rollerblading. But not yet. I am not so confident yet.

Soon, I come across some abandoned cars on the road, they’re made up of weirdly-proportioned red tiles. One of them is a sports car. I clamber in and try to decipher a means of driving it, or even just rummaging around in the boot for warm clothes, or a cool skateboard. You never know.

I am greeted with a detailed screen explaining everything about this particular vehicle. 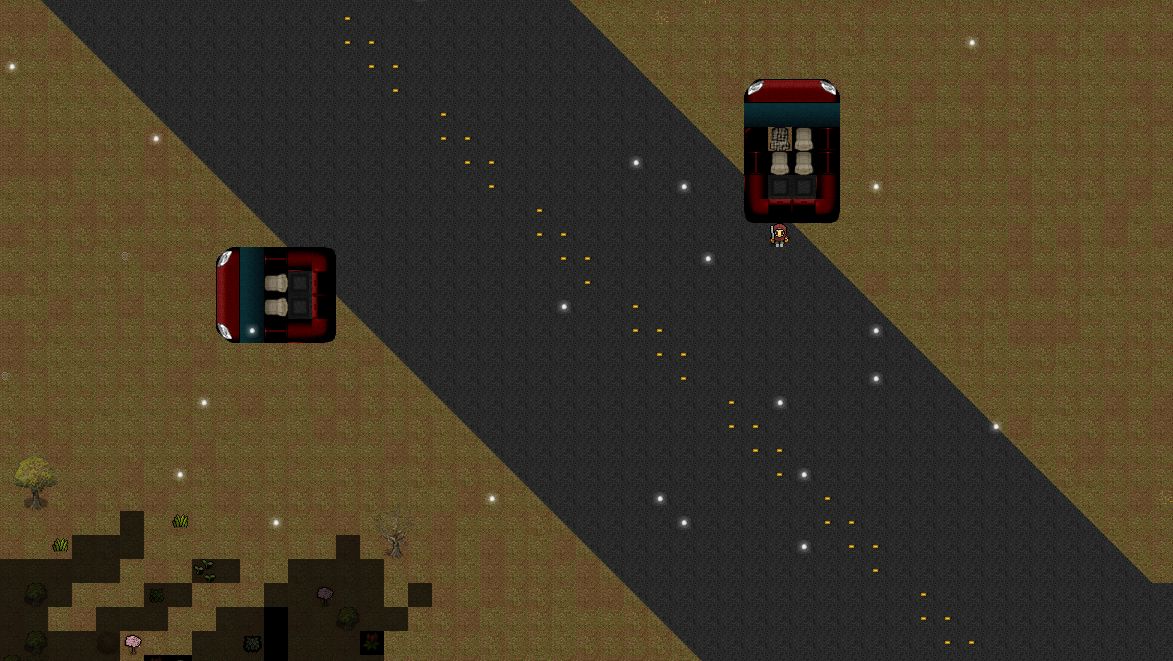 But there’s nothing in the trunk and no fuel in the tank. I abandon both cars and continue on foot. Er, on blade.

There’s a “road stop” marked on my map, and I soon roll into the siding to inspect the bins there. I’d really like a scarf for my cold mouth. The game keeps warning it’s going to get “frostnipped” in a few hours. Maybe there will be some clothes inside this small shack, whatever it is. 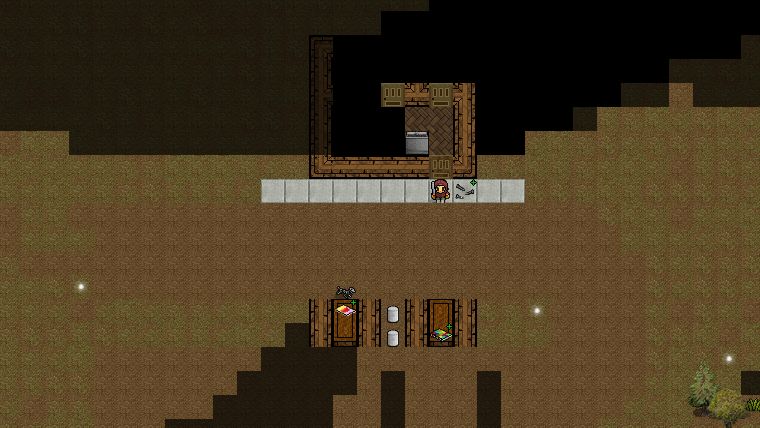 I press the “ignore” button and just start bashing on the door. It’s a dog made of bones. Big deal. I bash on the door again and again. The dog creeps closer. It’s fine. I’ll probably get inside any bash now.

Oi! I swing at the dog with my trusty rebar. 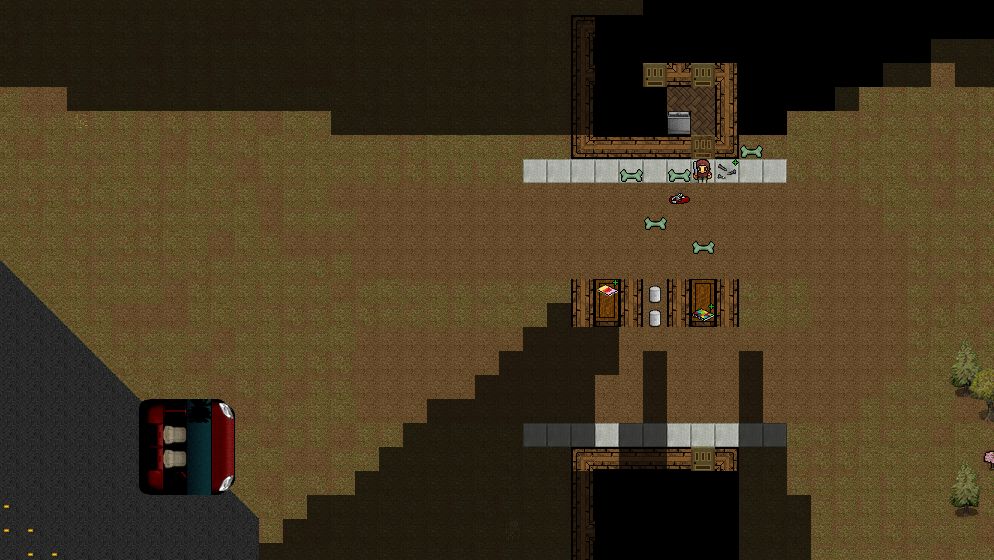 This is tragic. I’m not even visibly hurt. The health symbols showing each of my body parts is hardly altered (my left leg is marginally damaged). Necrodog barely nipped me, and I bashed him to death in a single pitiful strike. I just moved towards him: the traditional roguelike violence of an arrow key. We could have been friends, boney boy. You could have helped me find a proper skateboard.

I bash down the door to the shack and start rooting around in the dark for a nice scarf. But I won’t find any here. This is a toilet. 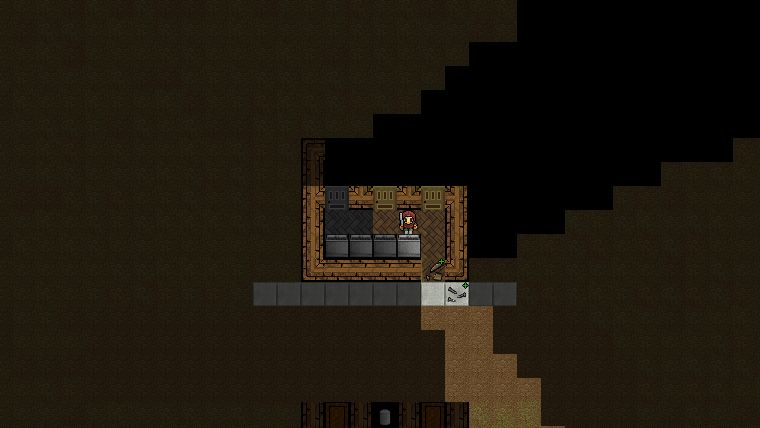 I get back on the road and try to ignore the icy wind. Several hours pass. I visit a science lab, but the doors are locked. I skate past a plane wreck, full of zombies in army gear. I find a military truck on the road and clamber aboard to marvel at the machinegun turret on top, which I accidentally fire, deafening myself for several minutes. I find an abandoned RV and look in the fridge to discover a bottle of Pinot Noir. I take four swigs and throw the bottle on the ground, feeling lightheaded. Life’s not bad on the road. 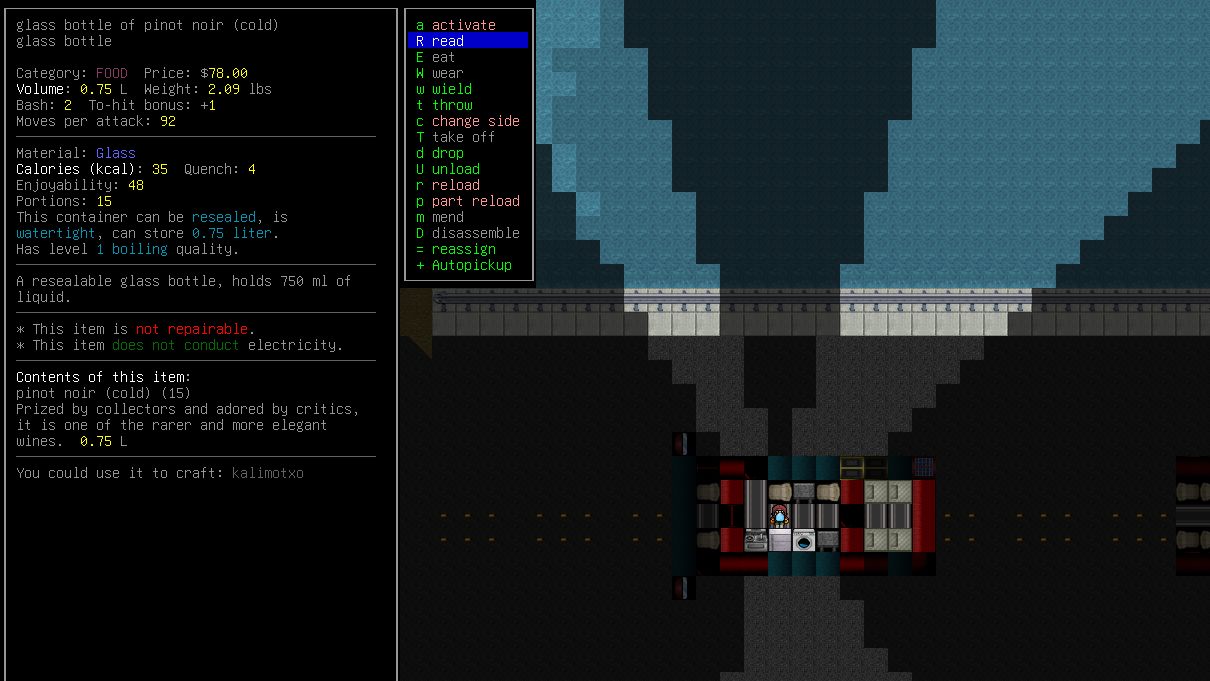 I look outside the RV. There’s a nearby town. All I have to do is cross this bridge, which is swarming with beavers. 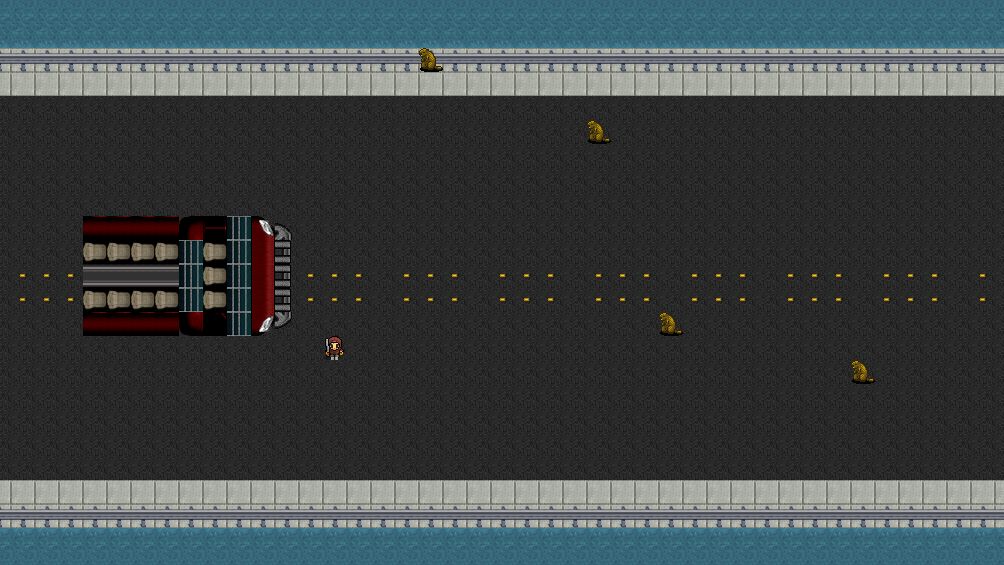 I roll across, safe mode now stubbornly disabled, and start to inspect the buildings, ignoring all the zombies as they creep into my sightlines. The football zombies, the hazmat zombies, the smoking zombies, the gore-soaked zombies. 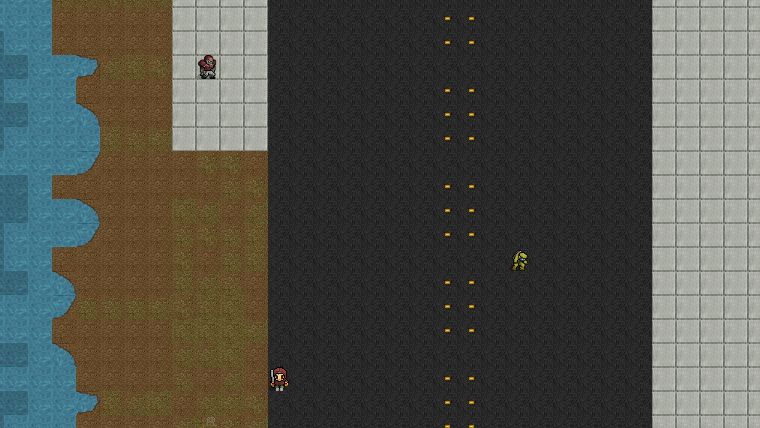 My map said there was a sporting goods shop somewhere around here. Ah, yes. Here we are.

But now there are zombies all around. North, south and east. Nothing to worry about, I’ll just slip down this alley to the west and use my parkour to jump through some side window, right into the sports store. Something rad like that. 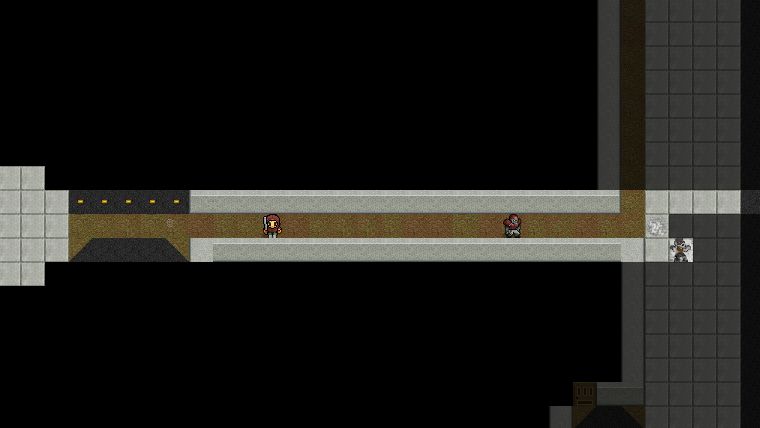 But the alley has no side window, and as I appear at the other side of the shopfront, a feral hunter is heading towards me with some undead friends. He is a zombie that can move several spaces in a frightening leap. I don’t like him. 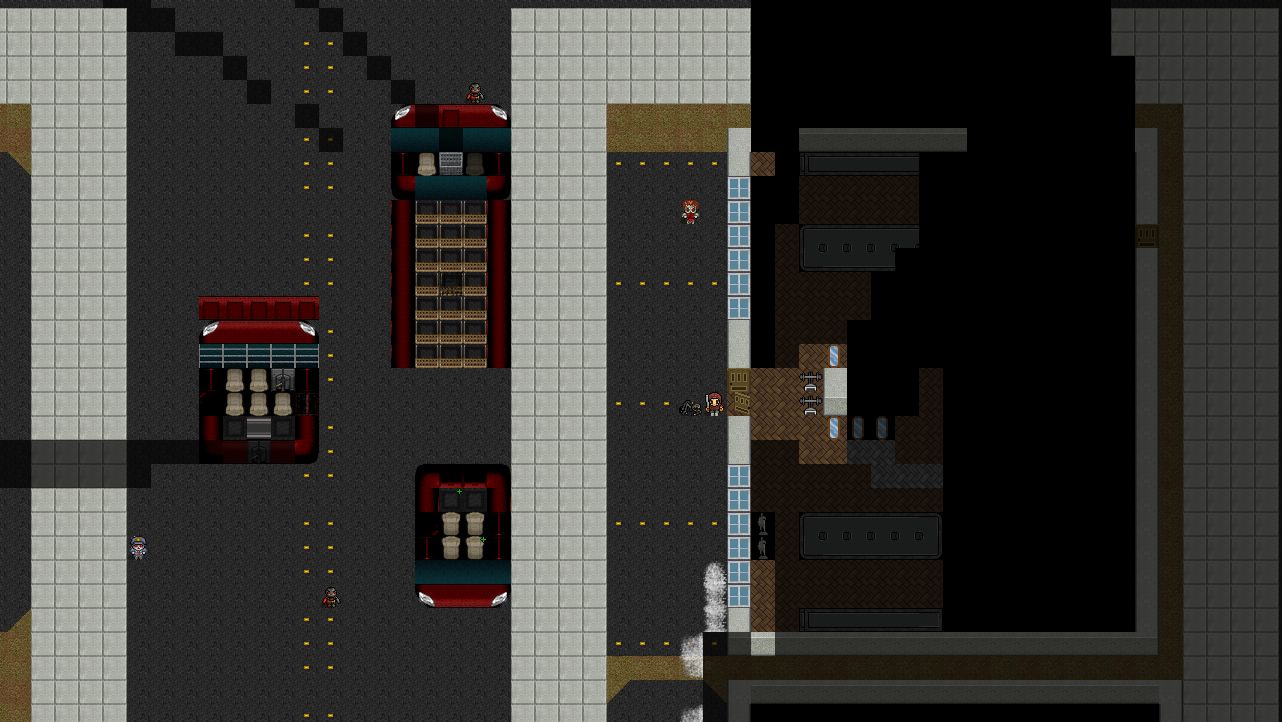 I dash into the sports shop, close the door behind me and look around for that skateboard. The skateboard will get me out of this. You can do lots of things with a good ‘board. Did you know I’m the 44th best OlliOlli 2 player in the world? 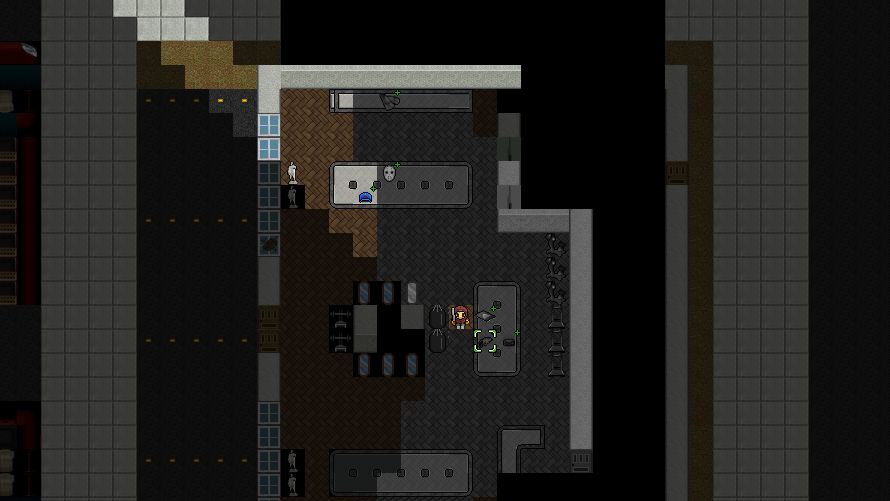 Of course, there’s no skateboard. There was never going to be any skateboard, was there? It’s rollerblades ‘til I die. There are some diving fins on a shelf. And sure, sure. I could put those on my feet instead, and face the horde like a scared toad. But it would feel like a betrayal of the wheeled boots that (give them their due) served me well on this trip through the wasteland. Rollerblades, it’s you and me versus these eight walking corpses. Here they come. 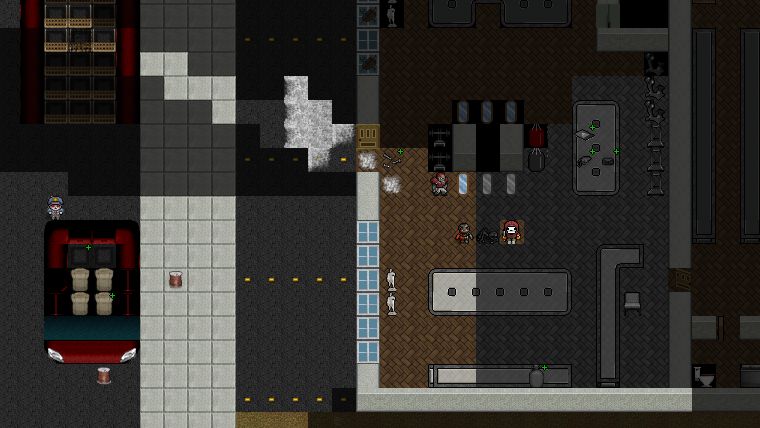 I grab a diving knife from the storeroom and a hockey mask from the counter. As the zombies come smashing into the shop, I take one last look at myself: swag bag, rollerblades, psychotic mask, stinking of Pinot Noir.

I am going to make a radical zombie.

You can download Cataclysm: Dark Days Ahead for free here. It is our 39th best free game in existence.