Cheap Golf [Twitter page, apparently] was one of the first projects to try out Kickstarter's week-long fundraisers, a silly scratchy project from Pixeljam offering a minimalist minigolf game, with extra nonsense.

It came out this week (in early access), having previously raised its $9,000 goal via a splendid figure of 666 backers, and it's - well, it's as silly as it looked. And quite fun.

It's a game about pinging a frankly square ball around glitchy, crude levels, trying to frenetically bounce it into the enormous hole, while the game offers a mix of confusion and berating between levels. The idea is a peculiar AI that may very well be called Susan (you're name is not Bill, by the way), is attempting to understand humanity through the microgestures it experiences as you hold the mouse. The game exists to facilitate this. 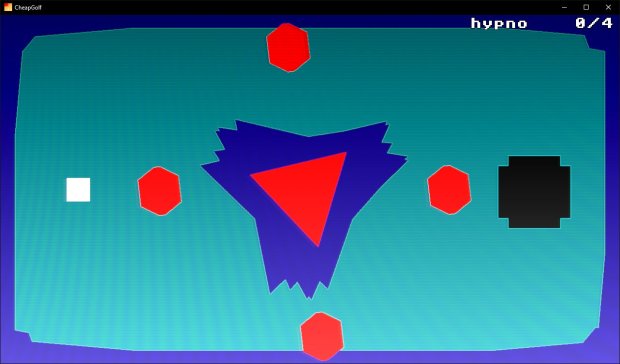 It's all a very daft, quick-n-dirty little game that I've enjoyed playing a fair amount. Although mostly for the atmosphere it creates via both its bantering, and more especially through the teeth-grinding 'music' of horror-scratches and atonal bloops. (As someone who not only owns but actually listens to Negativland's Deathsentences of the Polished and Structurally Weak, this is all good.) The game itself, while fun, makes the mistake of revealing how good it could have been by the complexities of the last few of its 60 levels.

Once it switches from what's essentially a toy - you'll not have trouble getting far under par in its first 30 or 40 levels - to something more difficult, it also becomes a lot more fun. One particular level entitled "aaarrrggggg" was well named, infuriatingly hard, but such a moment of victory when I finally completed it. By the end, it proffers a level of far more intricate complexity essentially for plot reasons, but accidentally reveals a whole other game that I suspect would have been better. Indeed, perhaps could still be.

There are other lovely treats, like the fake websites it occasionally links to, expanding its fiction far further than you might expect for a little oddity like this. For $4/£2.50, it's perfectly priced. A very odd, easily played, and definitely interesting project, it's a decent amount of fun, and aurally it shines. It could probably have been a more interesting game in terms of more complicated levels throughout, but that's not really the point. As a daft oddity, it succeeds.