From the opening titles it's clear that Chronicles of Teddy is channeling a deep fondness of Zelda II. There's homage clear in its presentation and its structure. But Chronicles of Teddy never quite reaches the heights of that inspiration. Its world is too meandering, and lacks the dense map design that would keep backtracking from being a problem. It has a good sense of weight and momentum, but its platforming is too fussy and its combat, while enjoyable when given space, never flows the way I wanted it to. No, what makes Teddy fascinating isn't in the legacy of Zelda, but a quieter, if still revered, game: the LucasArts adventure game Loom.

Puzzles in Chronicles of Teddy revolve around the use of an instrument called the Musicon. While the Musicon might initially seem to be an extension of Zelda’s ocarina, an instrument used to cast spells through playable songs, in function it’s much closer to Loom’s distaff and its drafts. In Loom short sequences of notes performed magic spells, but more than that, represented their own verbs. And those verbs could be applied in other contexts to great effect. An “Open” spell can open a lock of the entire sky, and drafts can be reversed to achieve opposite effects. 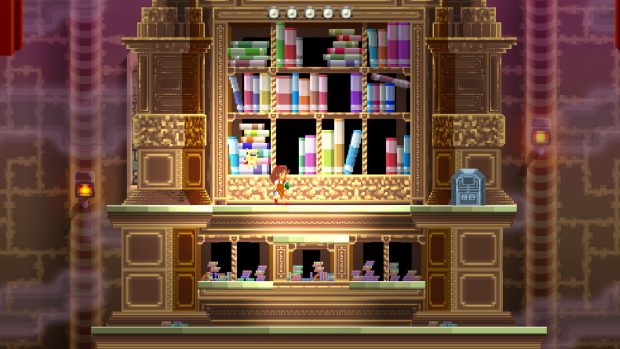 Teddy’s Musicon isn’t quite that flexible, but what it does carry is the same sense of language at play. Creatures in the land of Exidus speak through musical tones, and so the Musicon becomes an instrument that is part spellbook, part pocket translator. It starts off limited in ability, but as runes are found more musical tones can be played, and each of these tones allows new words to be learned. These words in turn will allow you access to new areas, either by casting a spell, speaking the names of people and places, or responding to questions.

It does a lot of work towards recontextualizing otherwise usual RPG interactions and tropes. One of my favorite examples of this is the game’s villages. They function similar to other RPG villages, giving small snippets of dialogue and information on the next objective, but here they provided another opportunity - the chance to expand my vocabulary. Dialogue from villagers is presented in short phrases, displayed in text, but also in the accompanying runes and tones for each word. Each of these words is then recorded into Musicon’s lexicon. Not all of these words are useful - in fact, with about 130 available words, most won’t be. But even then they still feel exciting, replicating a little of that small sense of discovery in learning new words in a language you’re practicing.

Of course, you’ll inevitably be putting some of these to use. Sometimes that means translating simple instructions from runes a temple wall. Other times it means finding the right words to say to the guardians of those temples. Each guardian has a certain attitude, and by listening to villagers you’ll find out what they want to hear. The process is straightforward - some villagers give very explicit instructions - but the process of learning the words to convince a guardian is satisfying in itself. It’s simple, but it gives a tangible sense of learning persuasive language. Its part basic RPG dialogue, part adventure game inventory puzzle.

In fact, Chronicles of Teddy carries plenty of the adventure genre spirit in it, having originally been released as Finding Teddy 2 and presented as a sequel to Finding Teddy, a point-and-click adventure game that incorporated small musical puzzles as well. It changed for console releases, and presumably to appeal to a wider audience that hadn’t played the first game. Being such a different style of game, I never felt like I was missing much by not playing the first game, but knowing the connection does put into perspective some of its more obtuse elements.

For all the satisfaction of solving its puzzles, Chronicles of Teddy can sometimes fall into the same traps old adventure games did, leaving me trying every solution on every question, only this time instead of a limited inventory its an expansive vocabulary of words. It doesn’t help that it also replicates the problems of Loom, asking me to replicate sequences of notes, but with a much larger number of them. More than a few puzzles started with me trying to systematically identify notes in the background atmosphere, then breaking down and haphazardly trying combinations that might be correct, before realizing I didn’t even have the correct rune that corresponded with those notes.

In some ways that feels accurate to being in a place where you don’t speak the language. It’s the frustration of not knowing the words to use, and subsequently being locked out of having a way to explain what you want. That was especially true in the first version of Chronicles of Teddy. As previously mentioned, the game originally released as Finding Teddy 2. The name change brought with it some other changes, including tweaks to level design, clearer directions and better hints, but most importantly it changed the look of the musical runes to resemble letters and sounds in English.

Most people will likely not even be aware of the older version, and for what it’s worth that’s probably for the best. Chronicles of Teddy is on the whole a better version of the game than Finding Teddy 2. It’s much clearer in direction and makes it easier to remember spells and discern patterns. There’s some mystery lost when I’m given a talking companion who spells out each objective. It’s a less strange game. And for as much as the changes to the runes needed to happen, having them so strongly resemble English letters makes me feel like one of the people who refuses to learn a language in its proper form, and instead has everything phonetically spelled out for them to pronounce it, even if it might butcher the details.

That’s a bit of a ridiculous thought, but to me it speaks to the power of language and the way it frames experiences. That’s what makes Chronicles of Teddy’s approach so fascinating. For all the ways it replicates others, its approach to music and language makes it feel singular.