If you click on a link and make a purchase we may receive a small commission. Read our editorial policy.
Chronos: Before The Ashes review
A substandard soulslike that's actually a port of the VR original. I'd say you're better off ditching this version and getting your Oculus on.

I think Chronos: Before The Ashes is very much okay. It's a prequel to looter shooter Remnant: From The Ashes, but it trades gun-toting, chest-pillaging action for a soulslike experience so grey, I swear my pulse flatlined a few times.

It was also previously an Oculus VR exclusive, so the version I played is a port. It’s a shame it’s not one that adapts the game to fit its PC home comfortably, because instead it ends up feeling a bit out of place.

I haven’t played Remnant, but I thought Chronos’s story setup presented a fairly compelling start. Modern society has taken a tumble, all thanks to these nasty beasts which emerged from mysterious “rusted places”. Turns out, a horrible dragon masterminded this operation, and over time reduced the human population to just a few scattered tribes. So, every now and again, tribe leaders elect one eighteen-year-old warrior, slap them on a boat, and send them across the seven seas into the dragon’s gloomy labyrinth lair in the hopes they’ll assassinate the beast.

As a big fan of the Matrix, I was pleasantly surprised when Chronos’s simple premise developed an “OoooOOooo, what’s real? Who knows? Willing to put yourself through this for a few hours to find out?” tease upon your arrival at the labyrinth. And you might be wondering why I was so specific about the ago of the warrior being sent off to do society’s dirty work. It’s because Chronos has precisely one more interesting thing going for it: you age by one year every time you die. Sounds quite cool right?

Unfortunately, in practise it is achingly dull. Every ten years I get to celebrate my birthday by selecting an attack boost, or a defence boost, or a whatever boost. Forget the years in between; those don't matter. I had hoped that as my character transformed into a silver fox, perhaps I’d build up a mixture of fun traits, sort of like the perks from, say, Fallout. Maybe I’d find it harder to dodge due to achy joints, but to offset this I could activate an ear-splitting joint click which would stun my enemies.

Nope: as the decades rolled by, my character’s storied history was reduced to some basic buffs. I ordered what sounded like a really interesting system that suggested meaningful change to your character over time. Instead I received, I don’t know, some Olay Regenerist, caffeine shampoo, and a brittle walking stick. 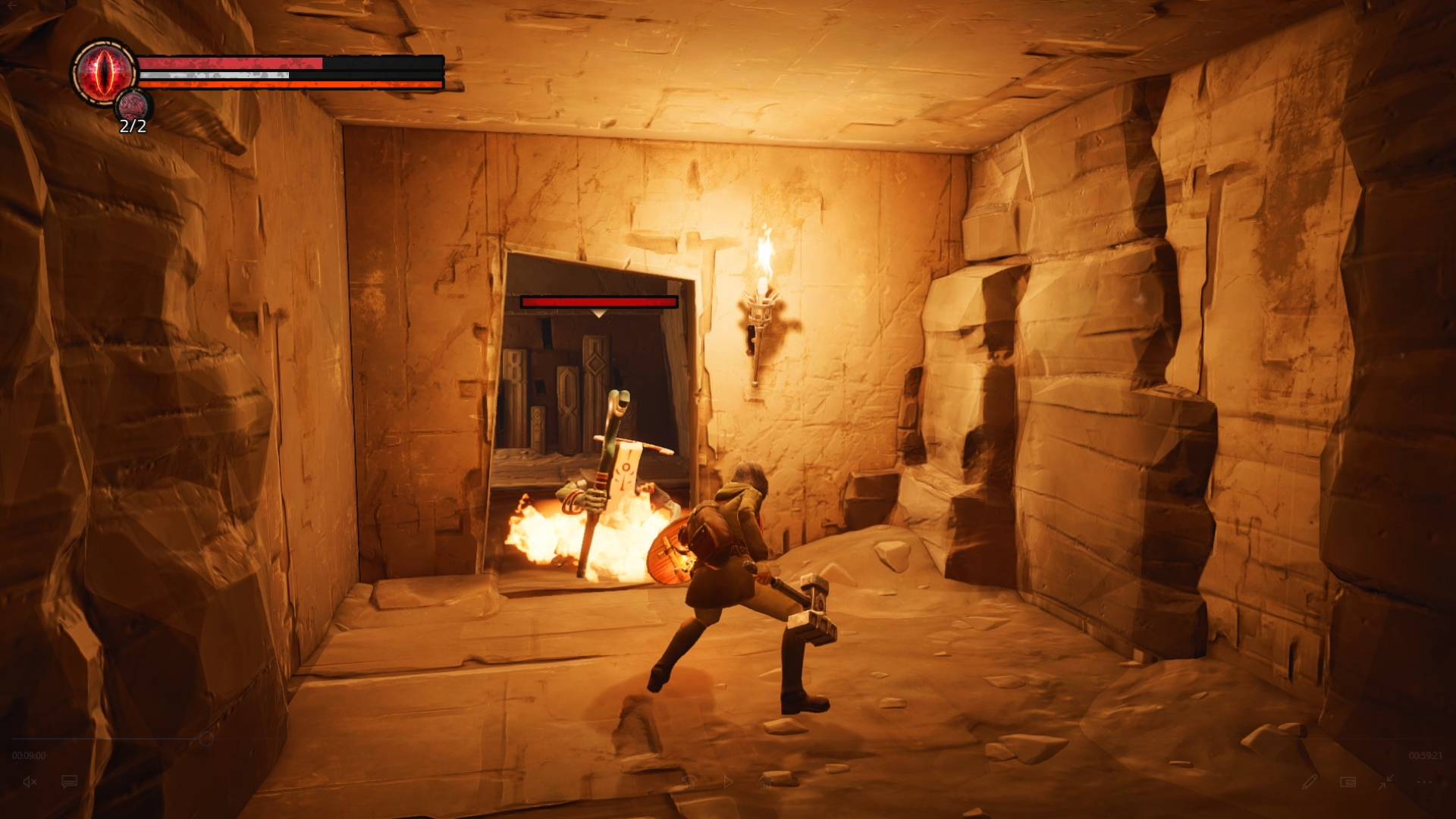 I can easily poke at Chronos’s bones because, in what is perhaps a thematic tie-in, its soulslike layer is as tissue thin as the skin of an elderly person. Good god, I think I can see its blue veins. You’ve got that all-too-familiar combat, revolving around timing your blocks or dodges before sneaking hits in. Your levelling means putting points into things like Strength, Dexterity, or Life to raise damage done by certain weapons, boost your maximum health and the like. The map interconnects, enemies are tough, blah blah blah. It doesn’t add any further time or age themed twists to these soulslike fundamentals, so they end up feeling over familiar and wearing as a result.

I craved meat on those bones. I wanted meat. Character customisation isn’t a thing, nor is armour, so I was stuck controlling an ordinary looking person for my ordinary adventure. Weapons include a sword, axe, or hammer: ordinary (although, there is a flail which roused more excitement in me than it should’ve done). So often I encountered the same old enemies in environments which, in fairness, showed teeny glimpses of beauty. Lighting came to the rescue a great deal, glancing off stone to give what would’ve been a drab tunnel some moody ambience, or adding a dash of magic to hushed throne rooms. Unfortunately lighting couldn’t totally save a world that’s ultimately quite muted. 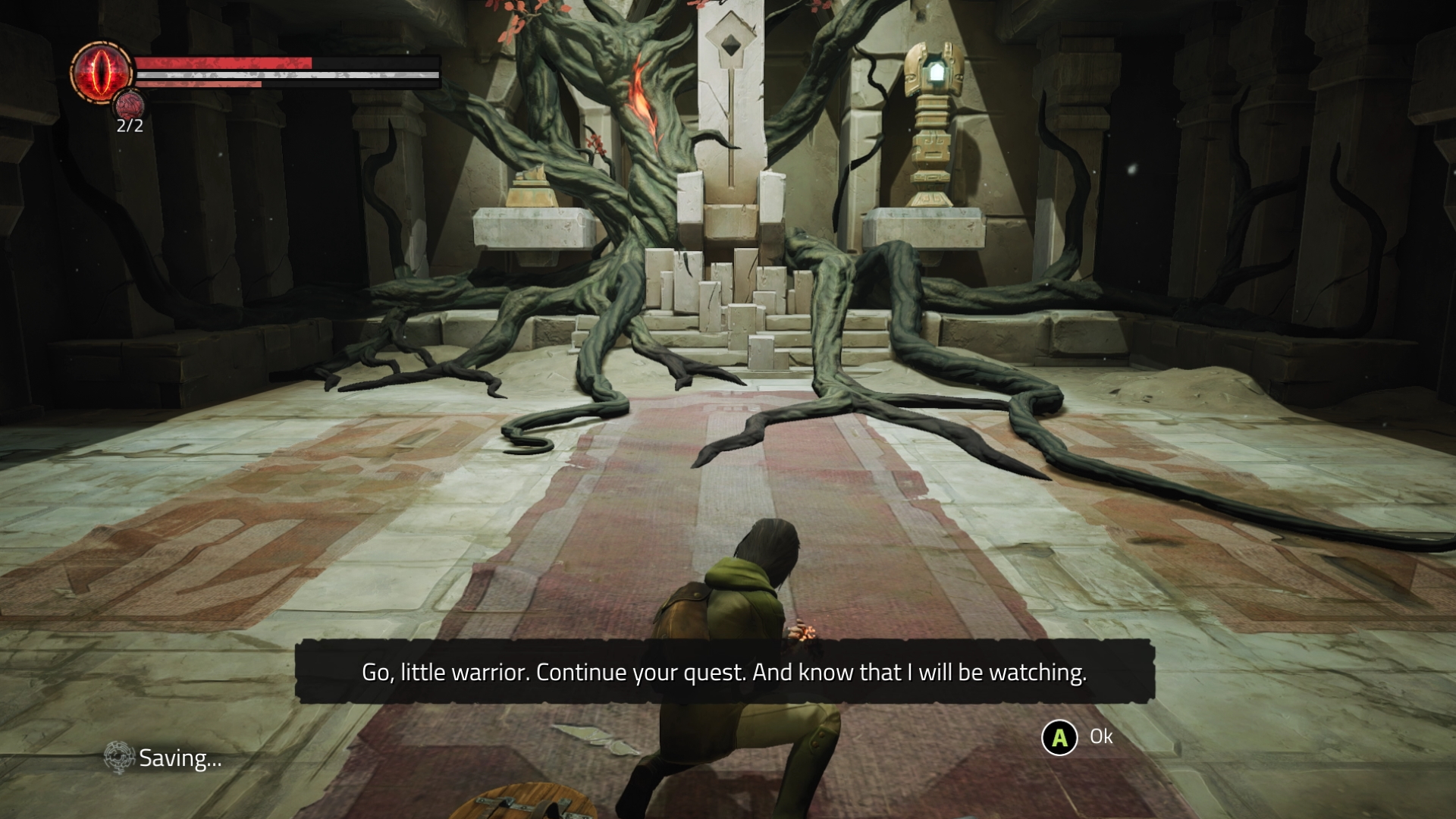 Even these elemental attacks (given to me by a talking tree) lacked the punch to leave me cackling with power like I wanted. One sets your arm ablaze, so I thought it would let me ignite enemies with each swing, but it only it boosted my attack and movement speed for a bit, then that was it [comedic fart noise]. Another made my weapon crackle with that lightning, so I expected it to stun enemies and encase them in electricity. Alas, it only made them stumble backwards [slightly louder comedic fart noise].

Maybe the best thing about Chronos’s world is its puzzles. They rely heavily on visual clues, so you might come across a lock in the form of a three tiered image puzzle which lets you select a panel and rifle through a variety of horn types, then masks, then clothes as you work your way down, for example. After a bit of head-scratching, you might remember passing a statue of a bull man who had funky tassels dangling off his horns, a particularly sinister mask on, and rocked a spiky jacket. Sure, it’s simple, but it forced me to pay attention to my surroundings and made me feel like a clever boy at times. 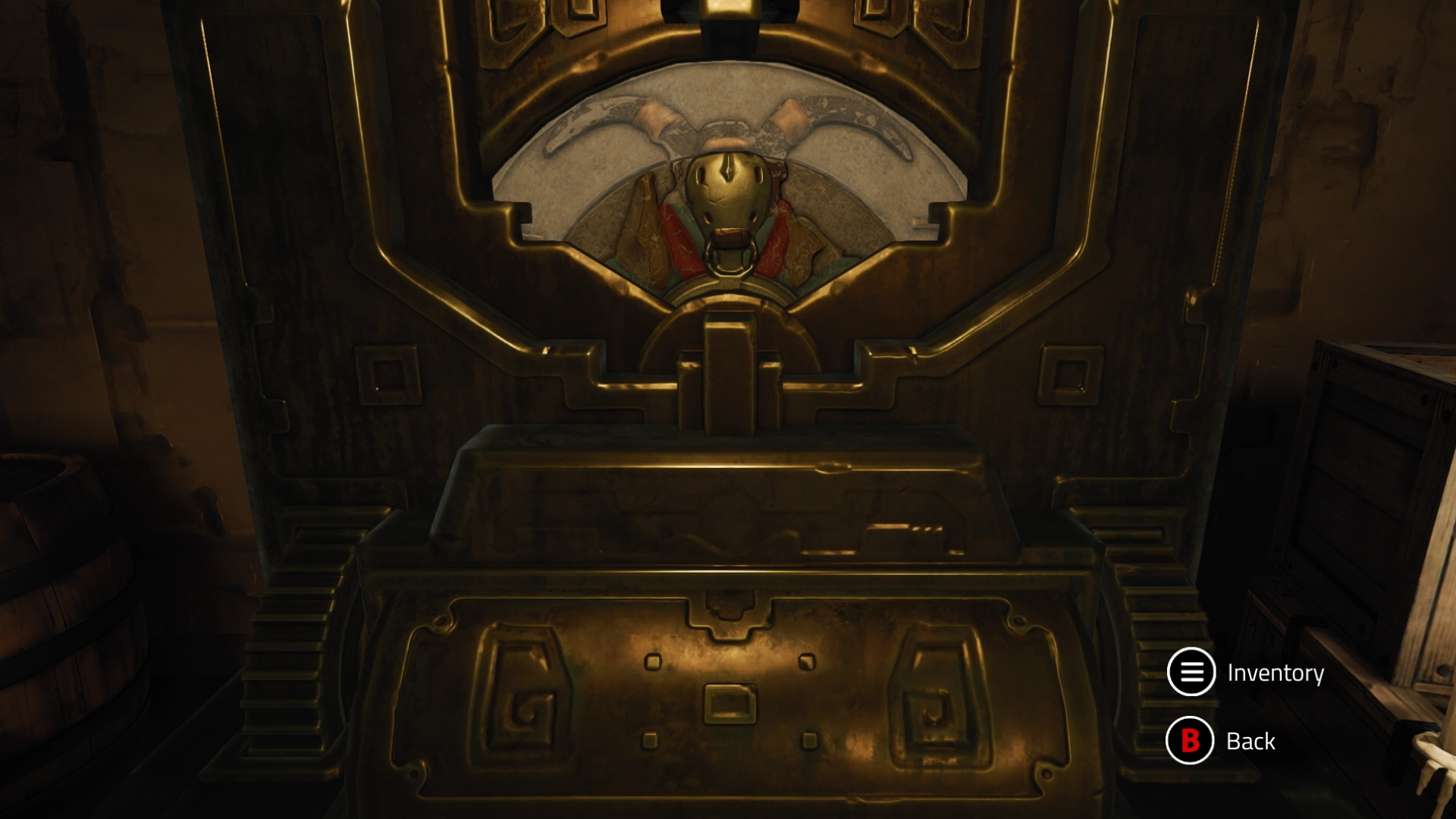 But Chronos’s reliance on visual clues for its puzzles are clearly quirks left over from its VR past. The same can be said for important collectible items being very difficult to spot, almost as if being in VR would’ve made it easier. I remember zooming in on the contents of a locked cabinet for what felt like aeons, wondering what on earth I was missing. I could see this glowing key taunting me, but for the life of me I couldn’t figure out how to get it. After almost sobbing, I rotated the camera until I suddenly spotted a slab of stone with a code on it. No “I am important, hello” sheen, nothing.

I got the sense that in VR I would’ve been more attuned to the contents of the cabinet, because I’d actually be there, spinning my head in all directions and paying attention to everything that’s literally right in front of my eyes. It felt just a bit too obscure for those of us leaning back in front of a monitor, controller in hand.

I'd go so far as to say that the confines of VR are what make Chronos simplistic and dry as a PC game. You can’t have something too complex because VR tech can't adapt easily to that, but also because the player would’ve been totally overwhelmed. I haven’t played the VR version of Chronos, but I bet most of my gripes would fizzle away if I slapped an Oculus around my head.

But as a PC game, Chronos: Before The Ashes feels like a cash in, with nobody bothering to ask "does this really need to be ported over?". Without VR it loses the magic of being in your living room knocking shit on the floor, and exposes the game as a very lukewarm soulslike.