The development of Close Combat: The Bloody First has lasted for as long as the war it depicts, but four years after its original intended launch date, Matrix Games’ World War II RTS is due to storm the beaches soon. As well as being the first 3D game in the series, it’s the first that’s been built in publisher Slitherine’s Archon engine, but more interesting is the focus on individual soldiers instead of faceless platoons. I recently tried to get to know them during a brief, whirlwind tour of ‘40s France, Italy and Tunisia.

“It’s the Band of Brothers of Close Combat,” is how it was pitched to me as I sat down to begin my first operation as the 1st US Infantry Division. Every soldier has a name, a biography and a bond with the rest of the platoon. If a mission goes poorly and the platoon takes heavy losses, it will be reinforced by rookies, lowering the platoon’s cohesion and reducing its effectiveness in the next fight. 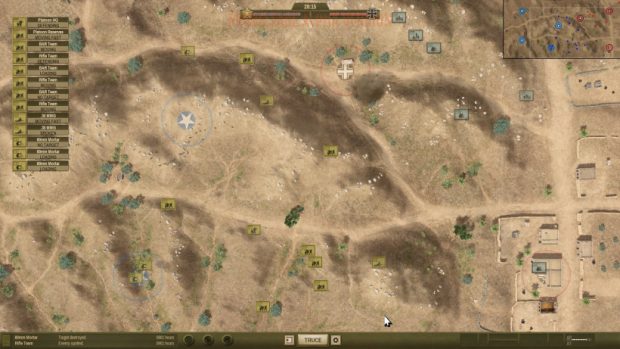 Each of the three platoons you can switch between changes from fight to fight as they react to deaths, fatigue and how well supplied they are. If things haven’t been going so well, the platoon might rapidly lose the will to fight during the next engagement, turning around and legging it when the bullets start whizzing past them. So you’ve got to take good care of them like a heavily-armed baby.

It wasn’t bullets or morale that made me quickly raise the white flag in my first scrap, however; it was the colour scheme. I was in Tunisia, where the combination of yellow and yellow and yellow can make for a hell of a headache, especially when you’re trying to plan a slick tactical assault with a bunch of tiny soldiers. I bravely conceded in lieu of mostly ineffective squinting. While the move to 3D has brought with it conveniences like a rotating camera and a topographical view mode, the maps can still be pretty hard to read. I left Tunisia and headed up to Normandy. 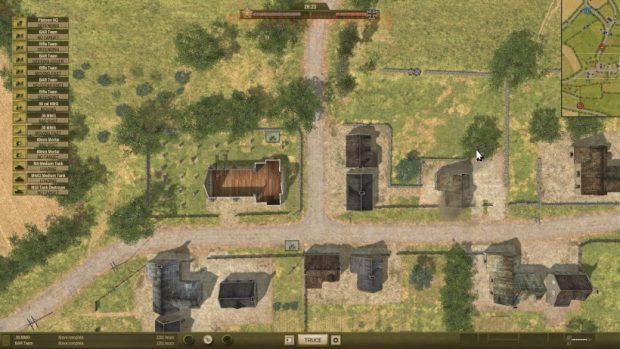 My first French scrap proved to be a little confusing. I started north of a small village, in amongst the hedgerows, while the Germans and their tanks waited below. As I cautiously moved down the road, keeping my fleshy platoons hidden by the treeline, I spotted the first tank. I targeted it with men and mortars, and kept doing so even when enemy reinforcements appeared. A few minutes later they were in retreat. All of them, including the guys I hadn’t even spotted. Obviously my fearsome reputation preceded me.

There were a few guesses as to what had made the mission so easy, but eventually the culprit was revealed to be the cohesion mechanic. In the mission setup screen, you can customise the fight and turn on or off different systems, including cohesion. With cohesion off, I returned to Normandy. 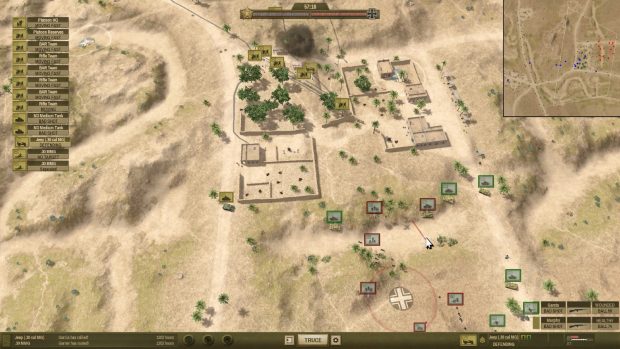 My second attempt was more of a success, at least in that my enemy didn't flee at the first sign of trouble. I started cautiously, even more so this time, concerned that my newly-bolstered foe might be particularly eager for revenge. All of my soldiers crawled through the grass on their bellies, undoubtedly ruining their uniforms. They were safe at least, and even managed to ambush the tank guarding the entrance to the village. It didn’t put up much of a fight, but it was also massively outnumbered. When reinforcements arrived, I nudged my mortar teams into action and tossed out a few smoke grenades, using them to cover my soldiers as they pushed into the more heavily-guarded village.

There were more tanks and even more infantry waiting for us inside. A couple of solidiers charged the moment we arrived, but most remained hidden behind walls and buildings. I expected a gruelling battle in the streets, running between smoke and gunfire, trying to find cover and keep as many men alive as possible, but it was more of a clean-up operation. Now standing upright, my troops moved pretty swiftly through the village, sending everyone they encountered packing. 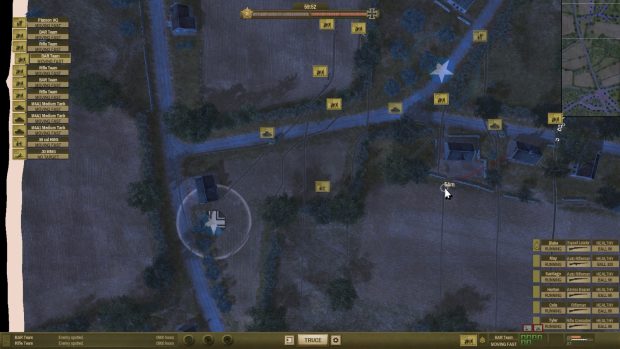 My Teutonic nemesis rapidly loosened its grip on the village until we’d cleared them out of the main street entirely. The tank that eventually trundled round the corner was a momentary cause for alarm, but it impotently sat out in the open until it became an ex-tank. With that final embarrassment, the rest of the Germans once again fled.

Looking at the list of units in the victory screen, I noticed I'd taken a lot more losses than I'd realised, but none of that seemed to stop my relentless forward momentum. I know from previous experience that I am far from a Close Combat savant; my foe was just pretty lackadaisical when it came to stopping me from liberating the village. There wasn’t any fight in them. My demo neighbour had the opposite problem, however, where the AI was in quite a rush, charging in and quickly capturing victory points. 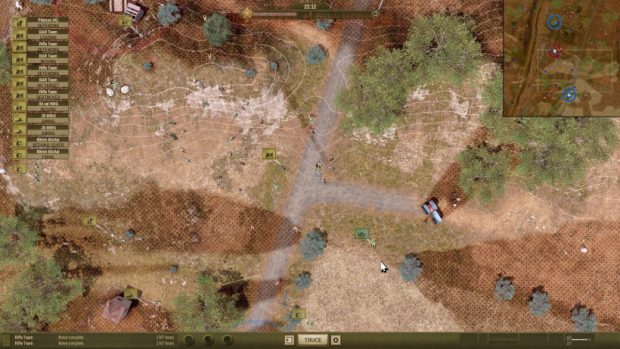 Memorable engagements drive Close Combat. The stats, tactics and platoon’s mental state give birth to stories of soldiers going berserk or desperate men resorting to bayonet fighting instead of fleeing when their ammunition runs out. Without an enemy that puts up a fight, however, there aren’t any of those dramatic war-time vignettes. When I still thought there was a threat, though, it felt like a Close Combat game. Crawling through mud and bushes, trying to sneak past tanks, forcing our way into an occupied village - it was all exciting stuff, until the Germans decided they had somewhere better to be.

Close Combat: The Bloody First is due out this year.