A Combat Mission battle orchestrated by a single wargamer invariably furnishes drama. Replace that lone CO with a band of collaborating commenters and the resulting pandemonium can be astonishingly tense, tangled, and resonant. This year's communal CM challenge involves the very first CM title – Combat Mission: Beyond Overlord (2000) - and a petite chunk of French coastline in imminent danger of liberation. Volunteers like your good self will, I hope, over the next twenty days, arrange a very warm reception for the British forces intent on establishing a bridgehead in the vicinity of the sleepy village of Caent. 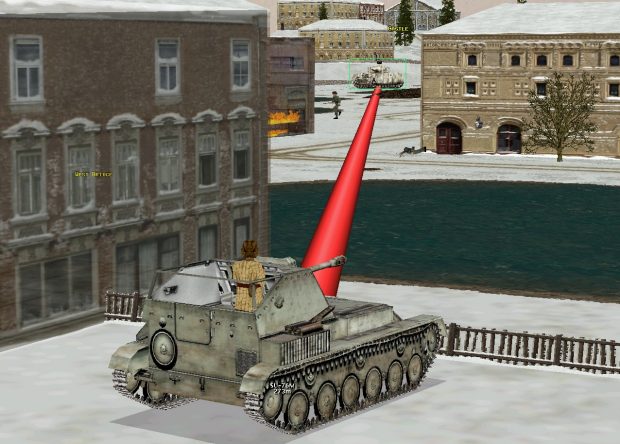 Just in case you weren’t around for last summer’s nailbiting Baltic barney, here’s how Play By Comment Combat Mission works. Every turn, via a comment along the lines of “Turn 1 orders here, please…” I solicit written instructions for friendly forces (enemy units are AI controlled). Orders are accepted on a first-come-first-served basis with individual commenters only permitted to ‘move’ a single vehicle, infantry platoon*, or weapon team per turn.

One turn Humbug might send the armoured car trundling southward towards grid square j22, while Catesby chooses a target for the 120mm mortars and SlowDoris does something sly with the sniper. During the next order round, Gazputin could end-up in charge of the halftrack while Balaton76 and LMF do the honours with the mortars and the sharpshooter.

Once the orders are in for all* units, I’ll execute them and return with a short image-accompanied account of how the last sixty seconds of in-game action played out (The progress reports will appear as standalone posts every morning at 08.00 GMT). Did that HQ manage to cross the lane without being cut to ribbons by the Universal Carrier in the gateway? Did your Sd.Kfz. 251 discover something nasty behind the woodshed? All will be revealed.

It's the morning of June 6, 1944 and minutes after being rudely evicted from a lovely dream involving Trude Berliner and the softest hayrick in Normandy, you find yourself hurrying southward towards a picturesque backwater called Caent. The local plage is crawling with Allied soldiers and vehicles and you and your comrades have been ordered to hold the village for as long as possible. Every minute the Britishers are delayed increases the chances that the counterattack, due to start shortly*, will succeed. Pushing the enemy back into the sea will be much harder if they've managed to secure footholds amongst Caent's stout stone dwellings.

*But not within the timeframe of the scenario. 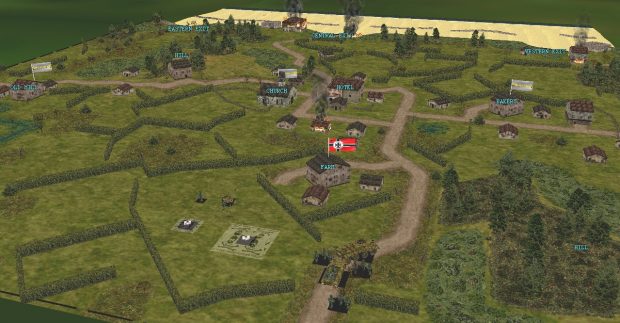 This is going to be a desperate fight. You will be outnumbered. You will be outgunned. The men you'll be facing will be highly-trained troops not easily deflected from their task. 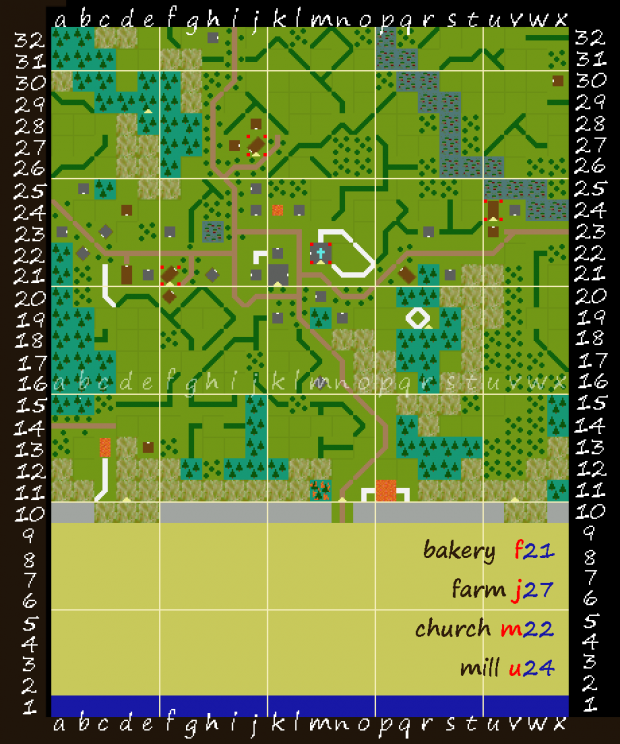 640 metres by 480 metres, the battlefield features four relatively low-value victory locations – the church, mill, bakery and farm. While the side holding the majority of these VLs at the end of turn 20 is likely to find itself victorious, the Germans may be able to grind out a win simply by destroying a substantial portion of the enemy's strength.

As mentioned above, CMBO's stylised/fudged representation of Normandy's thick 'bocage' hedgerows assumes all tracked Allied vehicles are equipped with hedge-breaching aids. Expect to see Cromwells (?), Stuarts (?) and the like pushing through leafy barriers from time to time, and accept – however unfair it may seem - that your own AFVs won't be able to follow them.

Units a few metres from bocage can see – and fire – through it. When further away, the high hedges completely block Line of Sight. In the pic above the selected squad has LoS into the field on the right but not the one lower-left.

Studying the following enlargeable screenshots should help you get a feel for the lay of the land. There are only three ways off the beach (the western, central, and eastern exits) and all involve a bit of a clamber. 'Inland' the terrain is relatively flat, the only hills of any significance are the low protuberances shaded red in the following image. 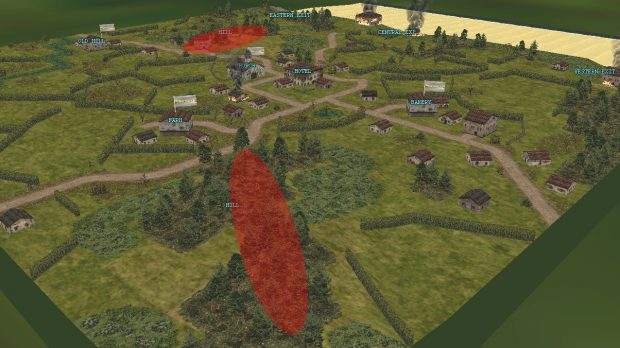 ^ Looking from NW to SE. 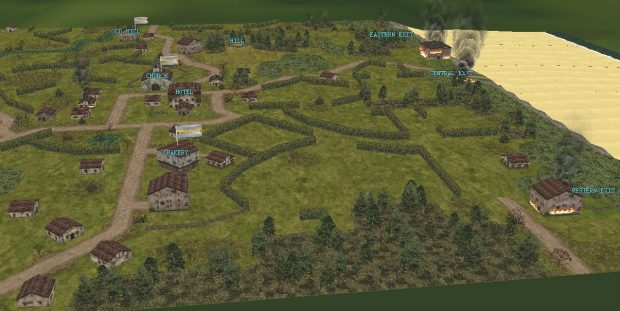 ^ Looking W to E. The 'Tall Pine' forest in foreground is impassable to vehicles. 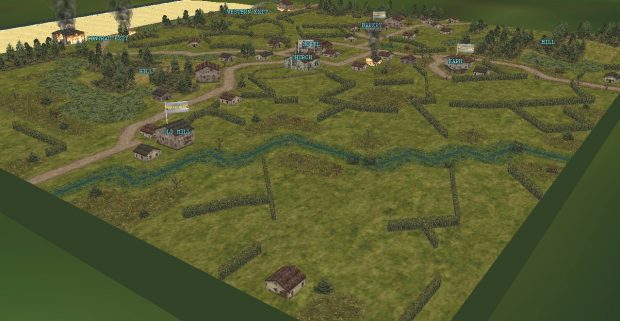 ^ The NE corner of the map boasts a marshy stream only traversable by infantry. 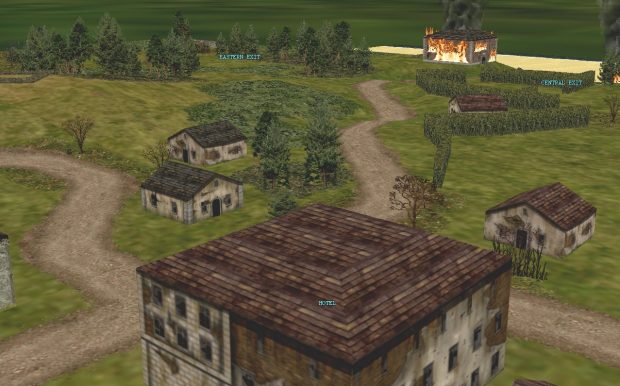 ^ Looking from the hotel down the beach road. On the left is one of the map's two low hills. Troops will refuse to enter burning buildings like the sanatorium on the clifftop.

^ Western exit from the beach... 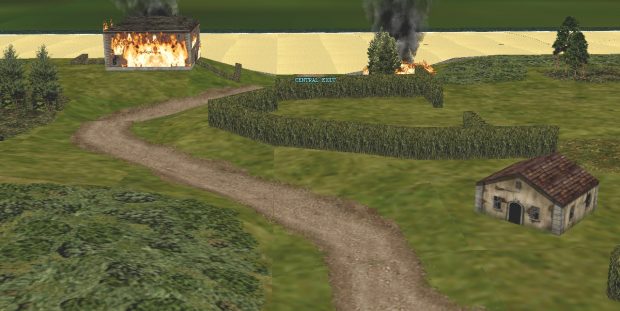 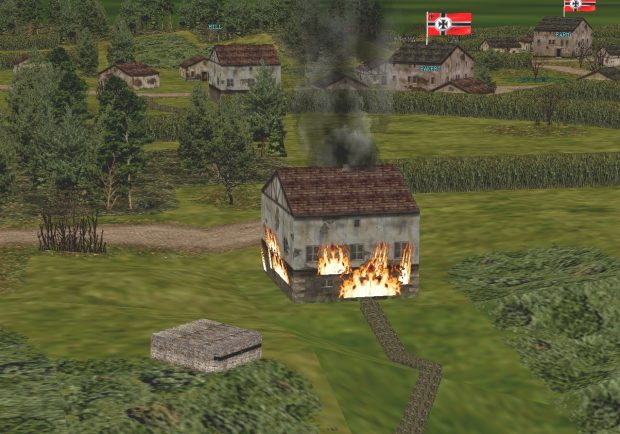 In a communal Combat Mission first, friendly forces include two pre-positioned MG pillboxes (b11 & r11. Already suppressed, these are unlikely to survive the first turn), plus a selection of units that must be sited at the beginning of the battle.

The deployable units comprise a sharpshooter, a 50mm Pak 38 anti-tank gun, a string of daisy-chain anti-tank mines, and, highlighted in the above image, a field of anti-personnel mines. Site these, especially the latter trio which are basically static, with care. They could be influential. 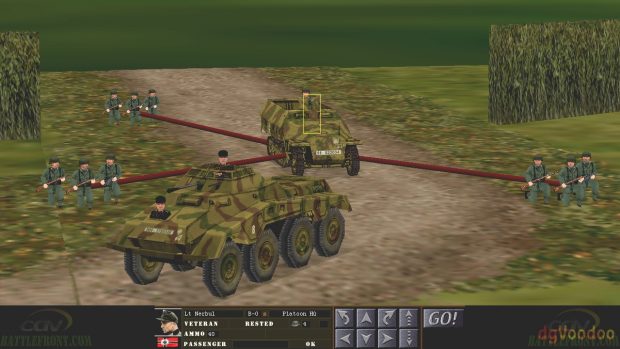 In addition to the sniper, AT gun, and minefields, the Germans start the game with a veteran PSW 234/1 armoured car (At close range and from advantageous angles its 20mm cannon should be able to deal with many of the AFV types fielded by the Brits), an MG-armed halftrack, and a veteran rifle platoon (3 x 9-man rifle squads each packing one or two Panzerfausts) bolstered by a 2-man MG 42 team. The MG team and 4-man platoon HQ start embarked on the HT. This cluster of units is on the northern map edge close to i30 when the battle kicks off.

The first wave of  reinforcements should arrive circa Turn 5. Expect a platoon of heavily armed Pioneers to turn up in the vicinity of a24 and a tank or SPG of some description to appear at i32. 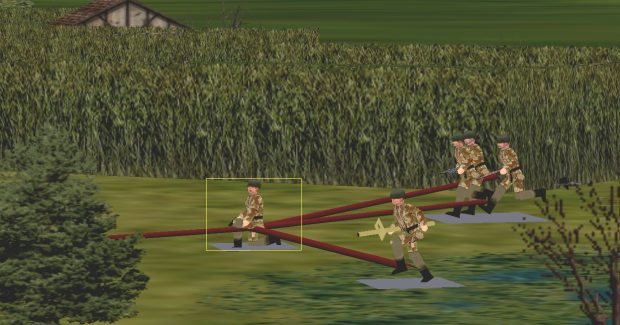 Apparently, a few fallschirmjager are also on the way. Travelling on foot cross-country from an airfield to the NE the Green Devils should be with you in 10-12 minutes. 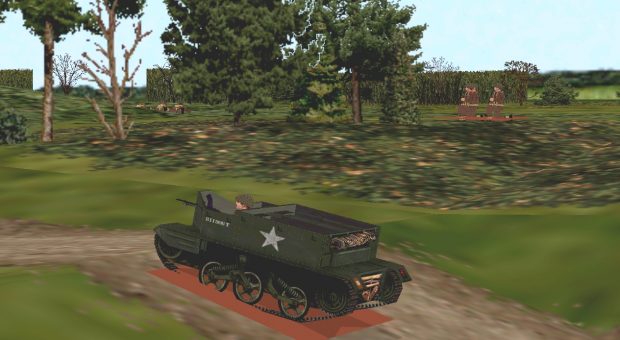 Before the two pillboxes succumb to the inevitable, they should be able to provide some information on the substantial Allied force gathering on the beach. Your HQ has also warned you to watch out for stray US paratroopers on the map's eastern fringe (Apparently at least one stick of American airborne troops was misdropped just along the coast last night). 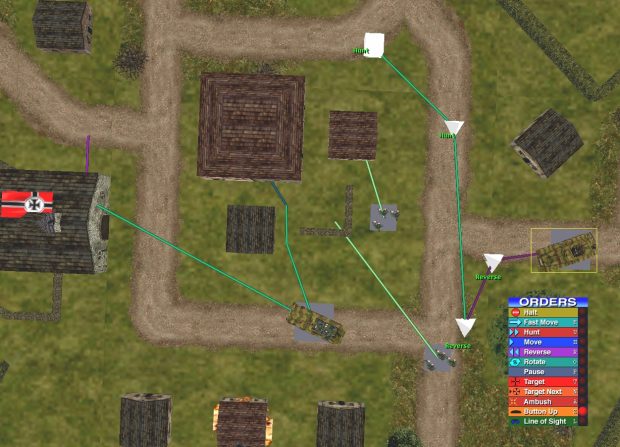 You don’t need to understand the intricacies of Combat Mission: Beyond Overlord in order to participate. Consider the tactical situation, and provide a destination coordinate and perhaps a clue to pace/cautiousness and I’ll do my best to translate your instructions into an in-game order.

Full strength infantry squads, represented on screen by three figures, can be split into two sections for tasks like scouting, and will fight harder, react quicker, and be less likely to panic if close to an HQ (The ringed squad in the above pic is ‘out of command’ and is therefore less effective).

During the sixty-second non-intervention 'action phases' that follow order issuing, units may encounter a threat or target that causes them to abandon or modify your instructions. For example, AFVs may decide to pop smoke and reverse if they don't like the situation they find themselves in. Specific targeting instructions may be issued but usually combatants can be relied upon to self-select targets sensibly.

The excellent pdf manual that comes with the game explains play mechanics in detail. I’ll do my best to answer any technical questions that arise during the next three weeks. Hopefully, knowledgeable spectators and players will furnish explanations from time to time too.

Happy hunting, Comment Commanders. Brace yourself for the British onslaught!