Best known for their PC cases, power supplies and cooling fans, peripherals maker Cougar have a new gaming headset on the block: the Cougar Phontum. Eschewing the eye-catching spaghetti-style headbands of Cougar's previous headsets, the Immersa and Immersa Pro, the Phontum (definitely not Phantom) aims to win hearts and minds with its oversized 53mm audio drivers, universal platform support and its rather nice price of just £43 / $50.

Compared to the head-turning Immersa, the Phontum is a much more traditional (and arguably more tasteful) kind of headset. Its thin, padded headband retains a flash of Cougar's trademark orange on the inside, but the rest of it, from its black steel frame and memory-foam cushioned ear cups to its sleek, bendable, detachable mic and braided 3.5mm audio cables, is much more in keeping with other headsets of the day - all for around an astonishing £100 / $100 less than its upmarket rivals, too.

It's not just the build quality that makes the Phontum stand out, though, as you also get another pair of ear cups in the box (these ones being thinner and less bulky for 'on the go use', according to Cougar), and another 3.5mm audio cable for your PC that comes with dual connectors and a built-in volume and microphone controller, giving you even more flexibility in terms of cable length and overall usability.

That's incredibly generous considering its low cost - especially compared to the similarly-priced, Turtle Beach Recon 150, which comes with no extras whatsoever - so there must be some kind of catch, right? Well, the microphone isn't brilliant for starters, as it produced a lot of background noise both when I recorded myself talking in Audacity and over Skype calls. 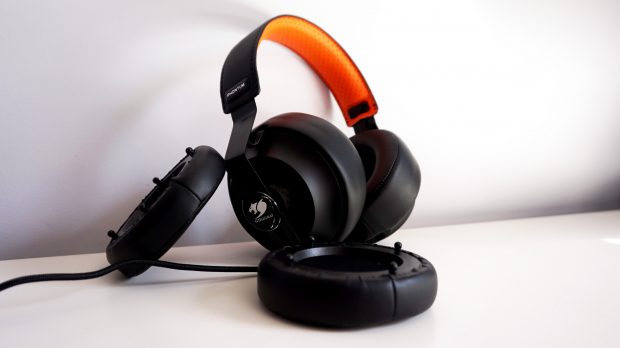 Speech was still clear and audible to an extent (the odd bit of wind-pop still crept in occasionally), but its main flaw was that it sounded like it was constantly raining in the background, according to my husband, which isn't exactly great if you're planning an extensive multiplayer session with your mates online and need to keep in regular contact with everyone, as you may well find yourself playing solo sooner rather than later because it's so damn annoying.

Fortunately, the Phontum's jumbo audio drivers are much, much better when it comes to actual game music. You'll likely need to do some adjustment first, as the headband itself is actually fixed in place. Instead, you change the size and fit of the headset by pulling down on the ear cups themselves, which slide down their respective metal arms until the Cougar logo doodad can't go any further.

Admittedly, the Phontum may not be well-suited to those with small heads, as even its tightest setting still felt a teeny bit too big for me. It never felt like it was about to fall off my head or slip down my face - the sturdy logo blobs provide more than enough friction in this respect - but an extra millimetre or two of adjustment in the northwards direction wouldn't have gone amiss. 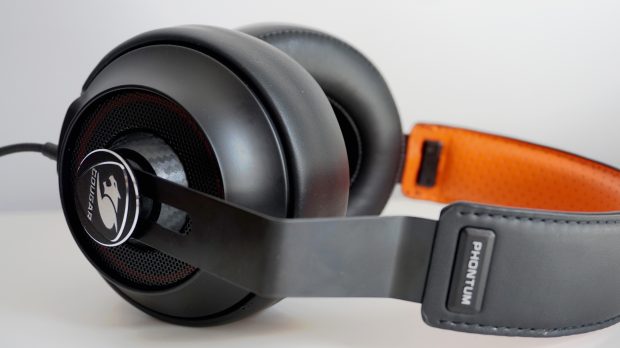 Still, for the most part, the Phontum produced a mighty impressive sound for such a cheap headset. In Hellblade, for instance, the whispering whirlwind of the Furies' voices inside Senua's head were clear and felt spine-tinglingly close to the back of my neck. Likewise, the distant sound of rumbling thunder sounded perfectly balanced against the rippling water effects as Senua rowed her makeshift logboat down the river.

Doom felt a bit flatter, all told, with super shotgun blasts sounding a little sad and muted against the cracking of demon skulls. Raspy demon screeches didn't have quite the same level of high-pitched clarity I was expecting either, again sounding a little dull compared to other headsets I've tested recently.

That said, the Phontum still produced a good sense of surround sound in Doom, with environmental effects and fireball trajectories arching accurately round my ears as I moved through each level, and the bass never felt like it was too overpowering, even when the game's pumping battle themes kicked in. 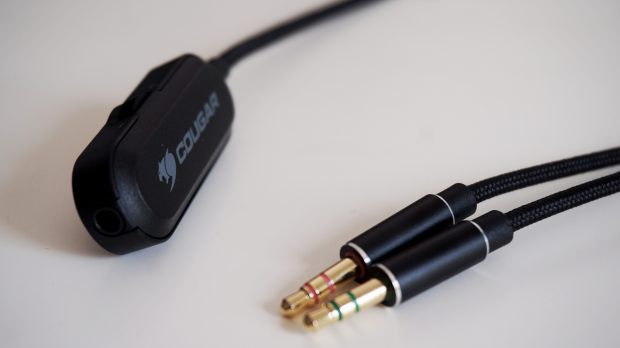 However, it's clear the Phontum's high-end range is indeed a little on the conservative side, as trying them with Final Fantasy XV ended with a similar result to Doom. In conversations, voices were lovely and clear against the game's background music, but move into battle and the banter between Noctis and his boyband pals was a little on the quiet side. The same goes for weapon effects, with sword clangs and scraped metal often getting lost in the wider battle music.

That may be a good thing if you like listening to game music more than you do sound effects, but it can make things feel a teensy bit unbalanced overall, especially if there's a lot going on. As I say, it's not that the bass is fog-horning itself over everything - far from it. It's just that the highs don't seem to have the same kind of range (or reach, if we're going with a height-based metaphor) as other, more expensive headsets.

It's less noticeable listening to normal people music, as all of my test tracks had a nice sense of warmth and richness to them, but pop and rock vocals still tended to feel like they'd been damped down a bit.

Still, for the money, I think it's something I'd be willing to compromise on. It's definitely a better sounding headset than the Turtle Beach Recon 150, and I'll eat my microphone if I ever find something this well-built for the same amount of money. Despite the thin amount of padding on headband, it's also actually quite comfy, which is pretty good going considering my dogged history with ache-inducing headset pinching. If you're after a gaming headset that doesn't break the bank, then the Cougar Phontum is well worth considering.