There was a time when virtual pets were all the rage, and of all virtual pets, Creatures were the most rewarding and the most demanding. The artificial life sim series was the foamy crest of a wave that started with the Commodore 64's Little Computer People in 1985 and leveled out around Nintendogs 20 years later.

Creatures is rarely mentioned anymore, but it hasn’t been forgotten. A couple of months ago, the Creatures Community Spirit Festival (CCSF) brought together fans, many still working on mods, sprites, backgrounds and levels. We spoke to them and explored the new lives they're creating, and the continuing legacy of this extraordinary game.

The CCSF is more necessary than you might think considering that the franchise built its appeal on fan mods and free DLC. The developers closed down their content servers years ago, and the fanbase experienced a diaspora. To this day there isn't a truly comprehensive database of the art and code of a generation of fans, and unless someone finds them on an old hard drive, many are already lost forever.

The 2017 incarnation of the festival was curated by graphic artist Doringo. It's one of the few unifying spaces of a fandom that's stuck in the pre-Facebook era. We're talking blogs, forums, and at least one webring that survived longer than any Norn you care to mention. Norns, for those not in the know, are the titular creatures. They die. A lot.

“I was trying to revive the community and give it a nudge in the direction of its former glory,” Doringo summarized his goals for 2017. And in many ways he succeeded – fans brought in new toys and world maps, even more than seen in 2005, the CCSF's first year. And in 2017, there weren't any of the 2015 edition’s depressing poems.

Many of these mods are compatible with Docking Station, the online-focused game that Mindscape released as a kind of demo for Creatures 3, so with a few patches you can try out most of the mods in this article for free!

Although there are complex creations on show, there are also jokes and playful ideas aplenty. The in-jokes of smaller crowds like this never become so saturated as to be annoying, such as a long-time gag of idolizing the Creatures series' resident dumb jerk, the Grendel. This year a group of fans designed a stage in their honor. Pilla, a coder and artist we spoke to, collaborated with sprite artist Linda to make a cute plush Grendel doll. Pilla grew up with the franchise, and even when she was just watching her older brother play the games, she told us, “I always pretended to be a Grendel, never a Norn.” 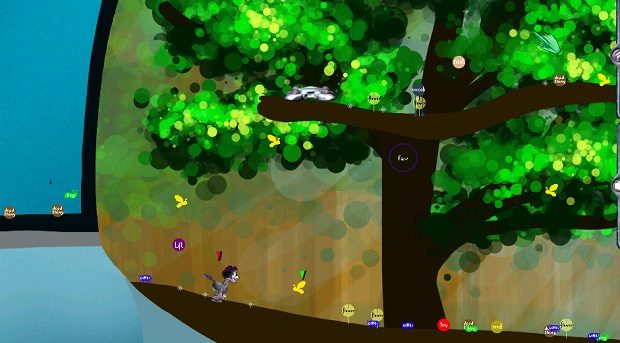 One of Pilla's non-Grendel contributions to the CCSF was the Betaship, a new room for Docking Station players to screw around in, “unlicensed” - free for anyone else to edit or adapt. It was a favorite of Creatures luminary Amaikokonut, who maintains a very informative blog supplementing CCSF – and told us:

"It charms me because the room is functionally complete, but all the food/toys/other agents are represented by placeholder sprites that are just a solid color circle with the name of the type of object printed on them. It's intended for others to build on and eventually replace those placeholders, but even the placeholders are charming in their own way and still very clean-looking. It's inspiring to see what others can develop without letting their inability to sprite get in their way."

Amaikokonut is modest about her own contributions, but her blogs for CCSF 2017 have investigated and found new quirks to the games' coding, 16 years after the franchise was abandoned. Even with all this, she hesitates to call herself an expert.

She is the latest in a line of scientists dedicated to unraveling the game's code, contributing to a Library of Babel's worth of primers produced by a lineage of fan-modders who follow the game for a couple of years, run a few experiments, and vanish again into the Net, often leaving little more than broken links. The virtual pet boom provided a unique space for young gamers, particularly women, to learn coding and art in a setting that wasn't an eternal shootybang war between men wearing different colors. Melissa McEwen discusses this aspect of the game Petz in an excellent essay you can read on Medium.

But Petz and Creatures had a completely different scale of complexity – only Creatures confronts modders with the guilt of causing stillbirth. (I invite you to imagine an Ewok comforting his wife after a miscarriage.) Creatures 3 made it easy to exchange mods with your friends. Creating them was harder – the Norns had complicated body chemistries, even modeling sex hormones and oestrus. The second game famously shipped with the default Norn genome making them too stupid to eat. This inspired a lot of genuine study, and a series of alternate genomes compete with each other for popularity to this day.

Among the cutest CCSF entries this year are the Orchid Norns, designed by CeruleanSilver to derive some or all of their energy from heat and sunlight. This is all without changing the game's engine: we're talking about virtual DNA that procedurally generates a photosynthetic organ that the game wasn't originally designed to recognize. After a few hours of playing with them, we inadvertently bred a race of immortal, asexual, photosynthetic idiots with freakishly small heads. 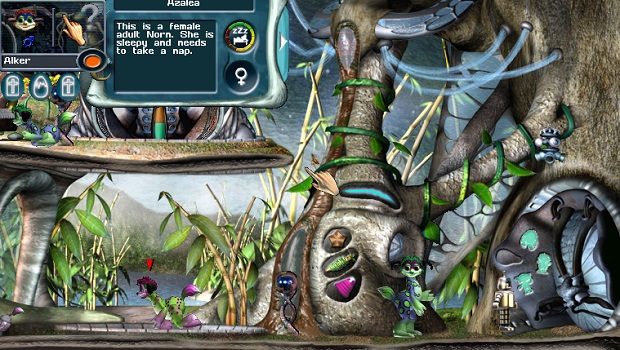 The Orchid Norns drew from the Thistleferns, a project of a modder named Dragoler who did a lot of the early legwork in creating chloroplasts. Dragoler sees a lot of value in the game's draconian complexity – “I'm one of the crowd who feels that releasing a watered down pet game would do the series an injustice. I place my faith in the community's own efforts, after proving time and time again how capable they can be.”

Dragoler's faith is well-founded – after all, the community that fixed Creatures 2. A long-awaited fourth game in the franchise was scheduled for 2011, but hasn't been mentioned since 2014. The original creator Steve Grand Kickstarted a spiritual sequel, Grandroids, which was fully funded six years ago and still exists only in the form of a development diary that doubles as a cautionary tale of scope creep.

There was a time when every computer shop had bins full of Creatures. We've forgotten the genre, and critical retrospectives can struggle to cover them because many are more like toys than games. You can't “win” at having a dog. You just... have a dog. 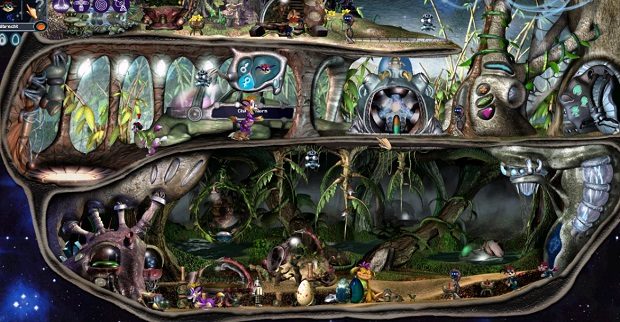 Those who want to win at having a dog must take matters into their own hands. Many try “wolfling” runs, where Norns are generated and left to live or die on their own. TheDrunkenNorn, a let's player, analyzes the different breeds and hacks that make a wolfling run easier, harder, or impossible on Creatures Caves, a surviving hub of activity. “The game is perpetually destined for complete obscurity,” he told us, “But it clings to life on the shoulders of a few people who really enjoy it.”

These threads are for the die-hards, but Pilla, the Grendel emulatrix from earlier, sees value in a diverse fanbase – “There are people interested in biology or genetics or behaviour, as well as artists and coders and people who just like to kick back, relax and play.” She credits that diversity for their resilience, as painful as it can be to watch people spread across the Web and fade away – “If one site fails and everyone's on that one site, the whole community gets in trouble.” The CCSF provides a vital snapshot of a fandom that has found a way to cheat death.