Alice Bee told me we were doing a day of adorable, heart-warming video game escapades. She charged me with the care of some artificial lifeforms: ensuring they were nourished, cherished and ready to flourish. I intended to teach my Creatures how to live the good life.

I failed to teach them how to use a lift.

This isn't my first attempt at Norn-rearing, as the creatures in Creatures are called. I had a go when I was eight, and can dimly recall getting one of them to play fetch with a beach ball. I also remember having absolutely no idea what I was supposed to be doing, and swiftly abandoning my babies in a tantrum that took place on both sides of the screen.

I launch the original game, and immediately feel a profound connection to my eight-year-old self. There's a toolbar with a gazillion buttons at the top, one of which I eventually realise is the hatchery.

I open that up and it creates a deafening secondary window - I'd turned the sound down in the Windows volume mixer, believing my ears to be safe. This is not the last assault Creatures will make on my mind and body.

I go for the red egg with cool yellow stripes on it, hoping my first Norn will spawn as a kind of gremlin-ey Flash. I drag it to the incubator, and wait. 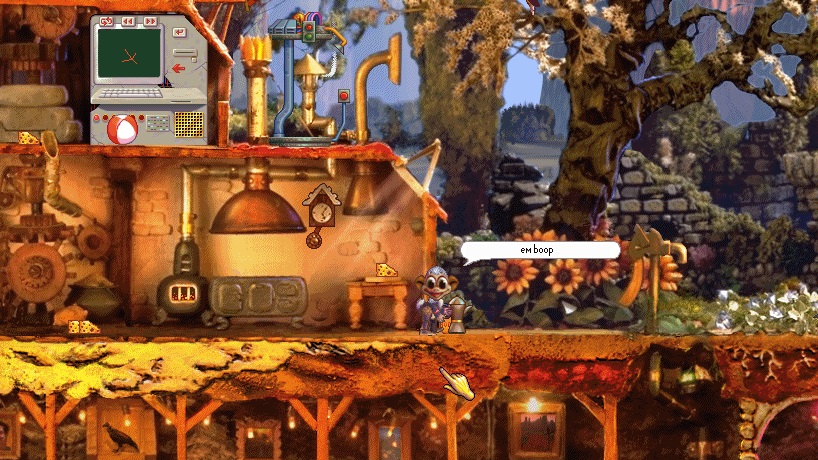 He is not the Flash, but he is adorable. His first act in this world is to pick up a nearby kettle and pee in it. His second is to eat some cheese.

(Later on, I realise I’ve failed to take a screenshot of the egg. I decide to wipe my save so I can take a nice pic of it back in the hatchery, but when I load the game up I find that the hatchery really is an entity unto itself. The hatched and unhatched versions have both vanished, and I’ve permanently robbed the world of a baby Norn. It is gone from all of time and space. I am an amazing parent.)

My first baby doesn't actually get to do anything else, because the world looks strangely different and I'm struck by doubt. Have I played this before? Or was it Creatures 2? 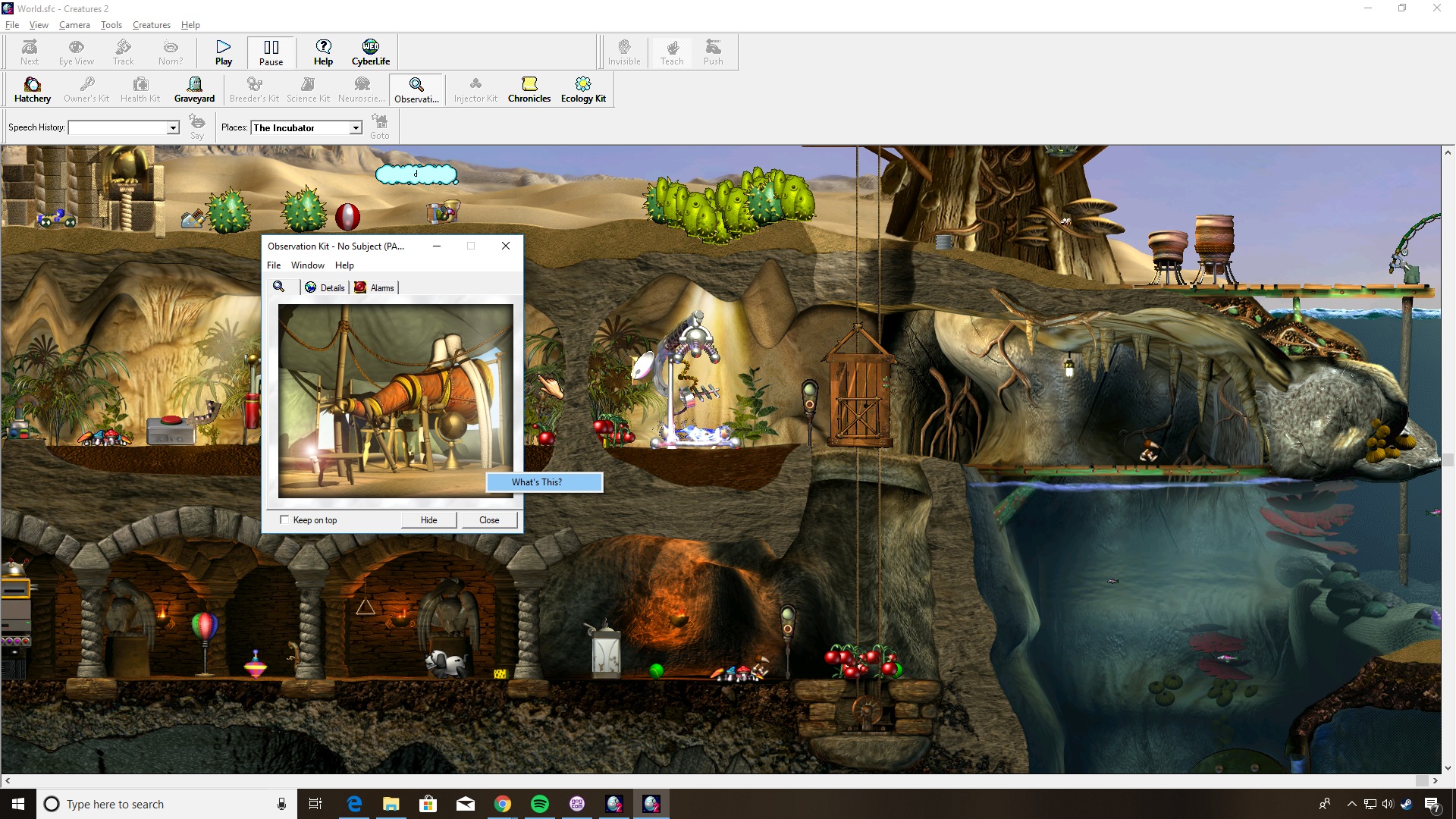 It WAS Creatures 2! With the correct game now running, I start exploring another exhausting array of buttons at the top of my screen. One of them opens up a picture of a telescope, and when I hover over it a clickable button appears that says "what's this?". That button launches the Edge browser, which opens up the Microsoft support page for Windows 10. This article becomes already more nightmarish than intended.

When I tried to open the help section of the original game, it popped up a dialogue box that told me help was not available. The help section of Creatures 2 actually works, but I ignore its advice about starting off with just one Norn. This is because it also mentions that they need 2 hours before they’re old enough to breed, and I'm eager to see if I can create wholesome Norn babies of my own. This is a mistake.

I learn that I can speak directly to my creatures. “D” I say, by mistake. “Das flab flib”, they reply. I give ‘em both a little scratch.

I get them both sat in front of the learning computer, somehow. They repeat the words on the screen, and discover the wonders of language. Then they start slapping each other. They also happen to be behind a pillar, so when I try to discipline them I can’t tell if I’m accidentally slapping a Norn for being slapped.

A more thorough investigation of the help section reveals that by this point I should have taught them both who I am, and given them names. I'm amazed that my childhood self sat in front of this for more than five minutes. 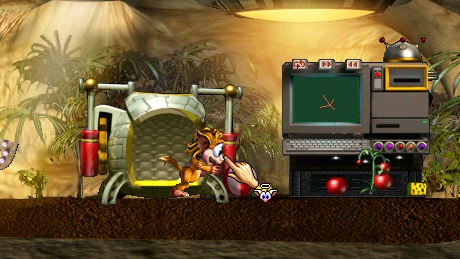 I teach them to follow my hand, which they try to nuzzle up against. It's genuinely lovely.

Boris keeps telling me he’s “gaaa”, because I can’t figure out how to get them down to the bottom floor where there's a machine that'll teach them how to express concepts. You need to press a button to work the lift, and I spend 45 minutes attempting to teach them how to press it.

It turns out I have fundamentally misunderstood the lift. We'd just been repeatedly hammering the call button - I actually have to press the one on the floor beneath, which I do. That whisks Sally away from Boris, and they both immediately fall asleep. 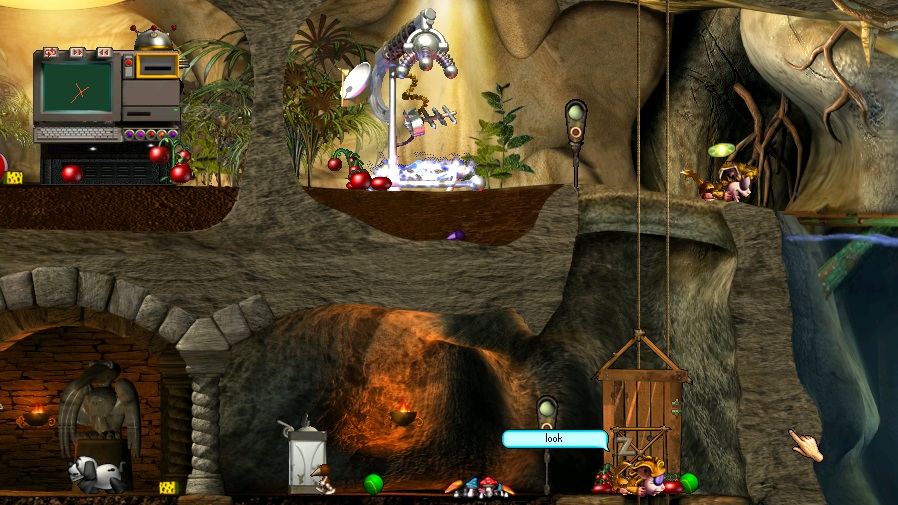 When Sally eventually wakes up, she walks right past the computer and into part of the screen that panning won’t reach. While I’m trying to figure out how to follow her, she wanders back and becomes transfixed by a tomato.

Every time I move the camera, it stutters in a way that I'm beginning to suspect is making me feel ill.

I lure Sally back towards the computer, with a brief frustrating stop where I'm compelled to explain what a musical triangle is - and she wanders straight past into the hidden zone again. I finally figure out I can follow her by pressing the track button at the top left. She goes back to the tomatoes.

Boris, meanwhile, repeatedly informs me that he's “exrmly goop”. But I don’t care about Boris. He falls asleep while stood straight up.

I go to Sally, who has gone back to demanding to know what the triangle is.

I swap back to Boris, whose mind has at least not yet been lost to triangular damnation. I send him down to Sally, and the moment the lift touches the bottom HE USES IT TO SEND HIMSELF BACK UP. He emerges at the very top, and falls onto some cacti.

I grow heartless. After doing everything in my power to set Sally exploring - wrestling, coaxing, begging - I give up. 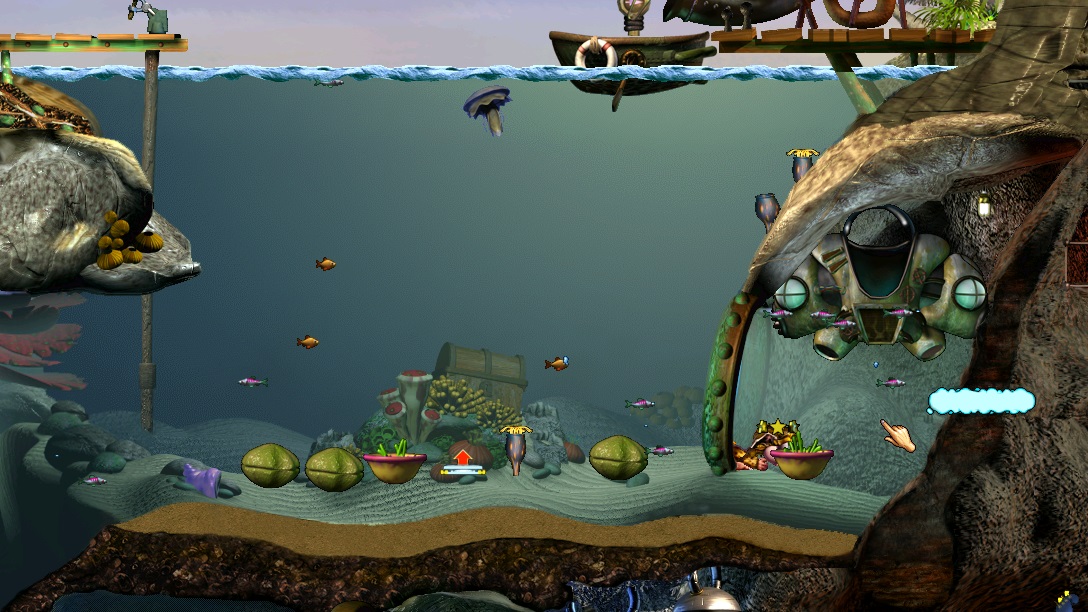 It's then that I notice Boris has actually gone wandering without any prompts from me, and now lies unconscious at the bottom of a nearby sea. Sally patters back and forth, repeating the words "hungry" and "sad". This grim existence is punctuated with brief sparks of happiness when she remembers the triangle is there.

I go off and watch telly for a bit. 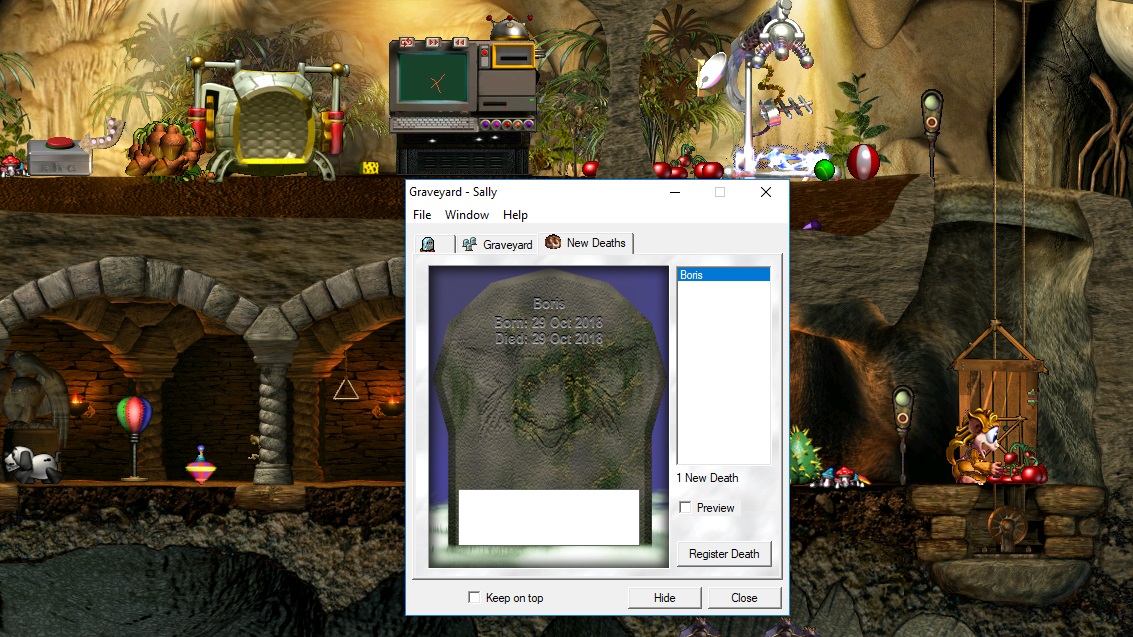 I guess I knew that was coming. At least Sally still has her tomatoes.