If you click on a link and make a purchase we may receive a small commission. Read our editorial policy.
Crucible review
A hero shooter fused to a MOBA, with disappointing results.

I like some parts of Crucible, but the guns don't feel good. That's a deathblow to any hero shooter, even one that's been mashed into a MOBA, and I can't move past it. Great character design, sumptuous alien environments, and a handful of interesting ideas have all been squandered by the way firing hot lead feels like tossing soft mints.

That's galling. More galling still is that even if the shooting was as sharp as Battlefield's, I'd probably still chalk Crucible up as an interesting failure.

Crucible's shtick involves two factions competing for resources on a hostile alien planet, but I couldn't tell you why. In one of the two main modes, two teams of four scrap over "hive hearts" that you get from killing big tendrilly fungi. My best guess is that those hearts are delicacies for the uber-wealthy, and you play mercenaries sent out to claim their culinary stake. I don't believe it's ever properly explained, but that's fine. What matters is that collecting three hearts wins your team the match. What matters is you need them. 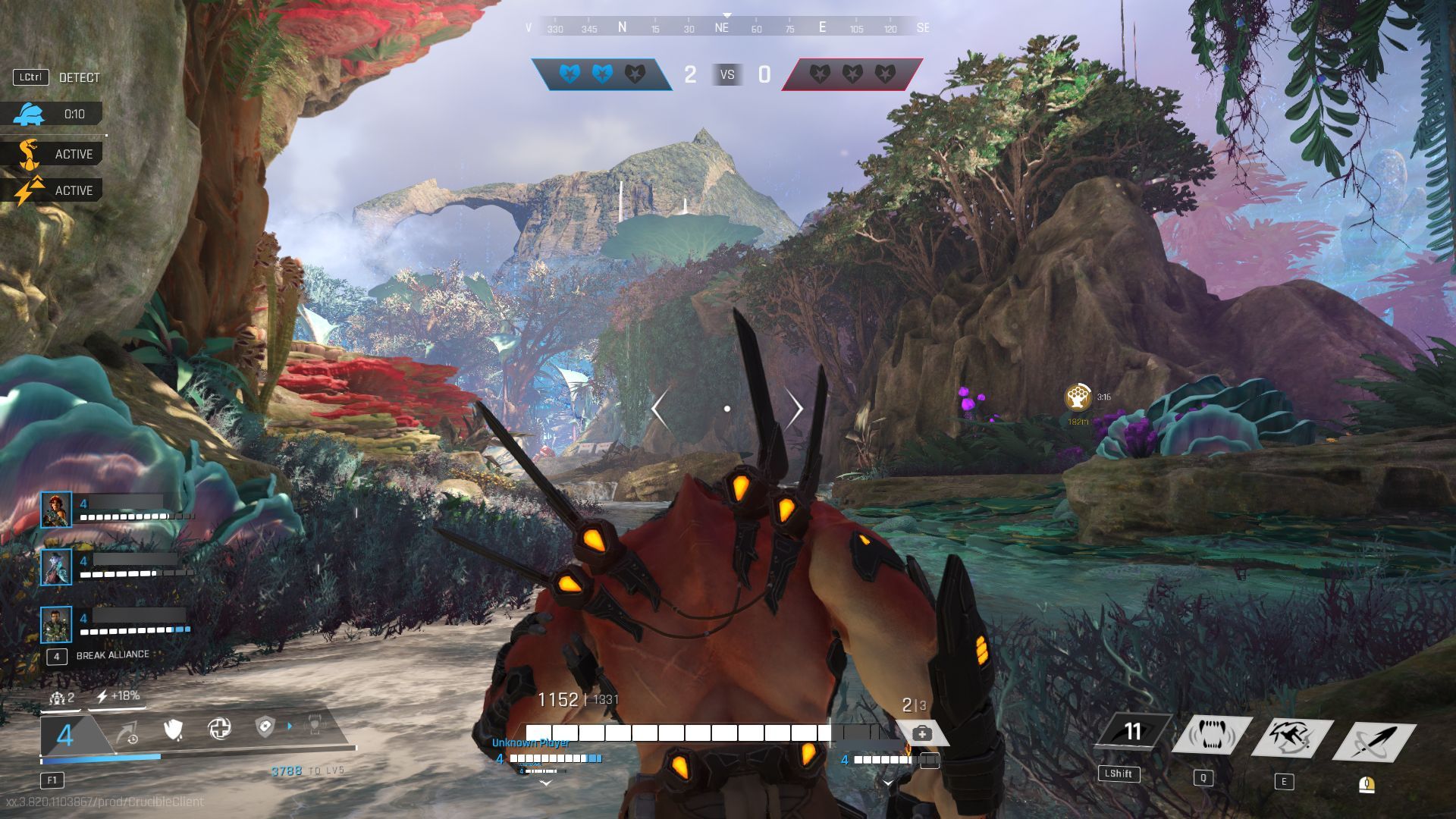 Not straight away, though. First you'll want to level up, and this is where the MOBA appendage of the underwhelming hydra that is Crucible rears its ugly head. There's only one map, adorned with luscious waterfalls, purple hues and spaceship debris, and it's heaving with Essence. Every character has four abilities and a left-click attack, and collecting Essence makes your team collectively tougher while enhancing your abilities in specific ways. Maybe you'll go invisible for a tiny window after using Ajonah's grappling hook, or briefly become invulnerable while you're punching foes as Drakhal, a charming red shark with legs.

Sometimes, you'll need to extract Essence by shooting chunky dinosaurs and very rude plants. Other times, you'll want to capture Essence harvesters, which pump your team with the good stuff until the enemy team takes control. This system almost works, but you do spend a lot of time mindlessly beating up the environment and watching capture meters tick up, especially in the early game. There's a stark contrast with conventional lane-based MOBAs, where you're constantly rubbing up against the enemy. In games like Dota and League Of Legends, competing for XP is an intricate battle of wits and timing, where both teams attempt to land "last-hits" from under each others' magical noses. In Crucible, the map is a sprawling mess that doesn't do enough to push players into conflict until the hive hearts spawn. 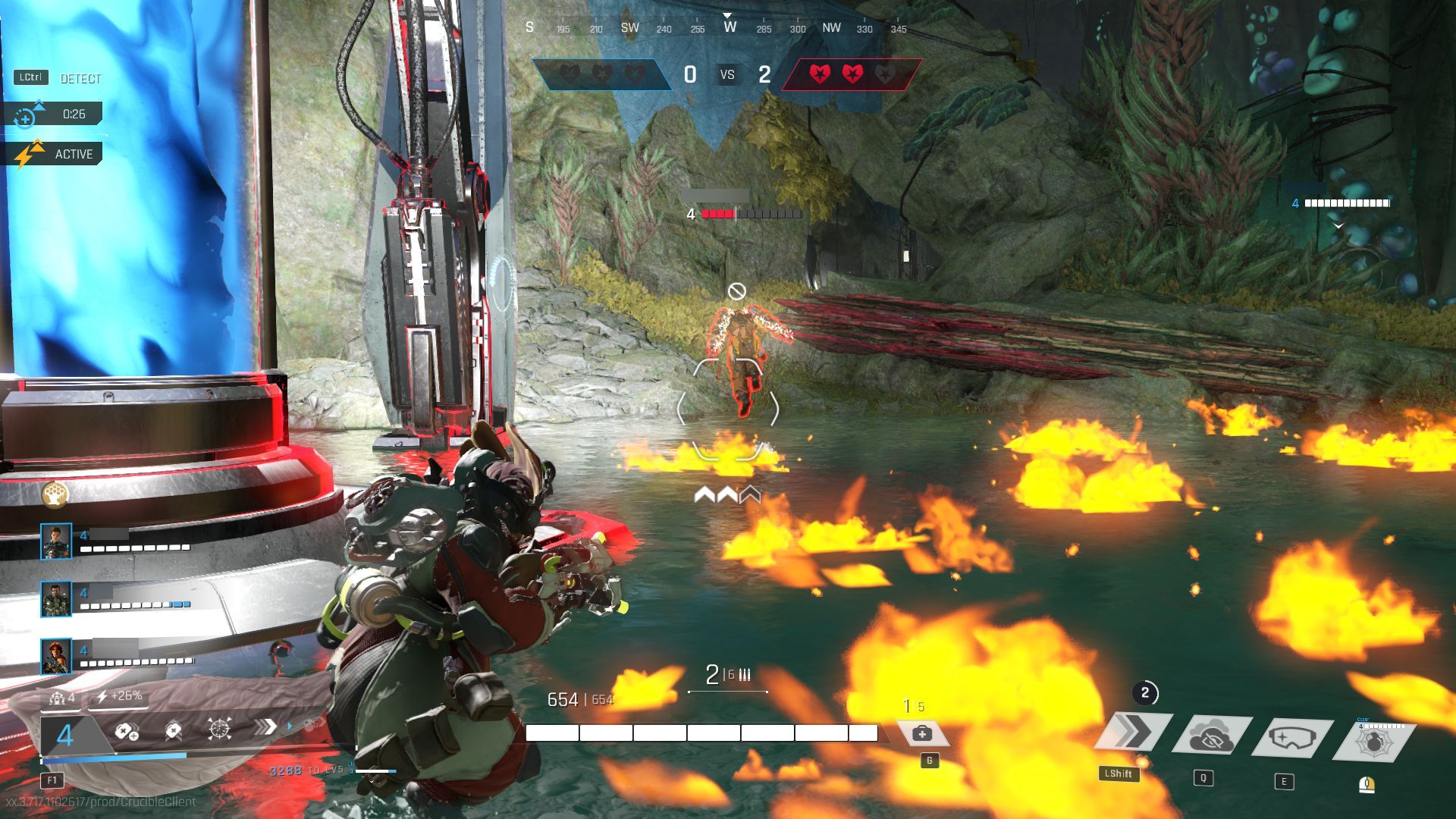 The battle royale mode is better. You fight in duos, on the same map, and with all the same Essence gubbins. There is a closing ring of death, and the last team alive wins. Murdering alien wildlife is much more exciting when you have to keep an eye out for an ambush - though again, it only almost works. Because you gain all the Essence of the people you've just killed, it's not uncommon for one team to steamroll their way to victory, stomping around the map and dispatching every under-levelled threat they meet. The number of viable characters also seem limited, with support roles outright inferior to damage-dealing tanks.

I do want to briefly pull the brakes on the disparagement bus, because Crucible has one idea here that I absolutely want to see copied. If your buddy gets knocked out, there's no way to revive them - but if you come across another orphaned enemy, you can offer a temporary alliance. That means you get to fight together until you're the last two remaining, then turn on each other. I'm sincerely flabbergasted that no other game has tried this. It's a refreshing twist, ripe with opportunities for chicanery, where you'd much rather your frenemy deals with the last opponents while you aim your sights at their back. I've never actually reached that dramatic conclusion, partly because I'm not good enough and partly because of that snowballing problem, but it's a delicious scenario to imagine. 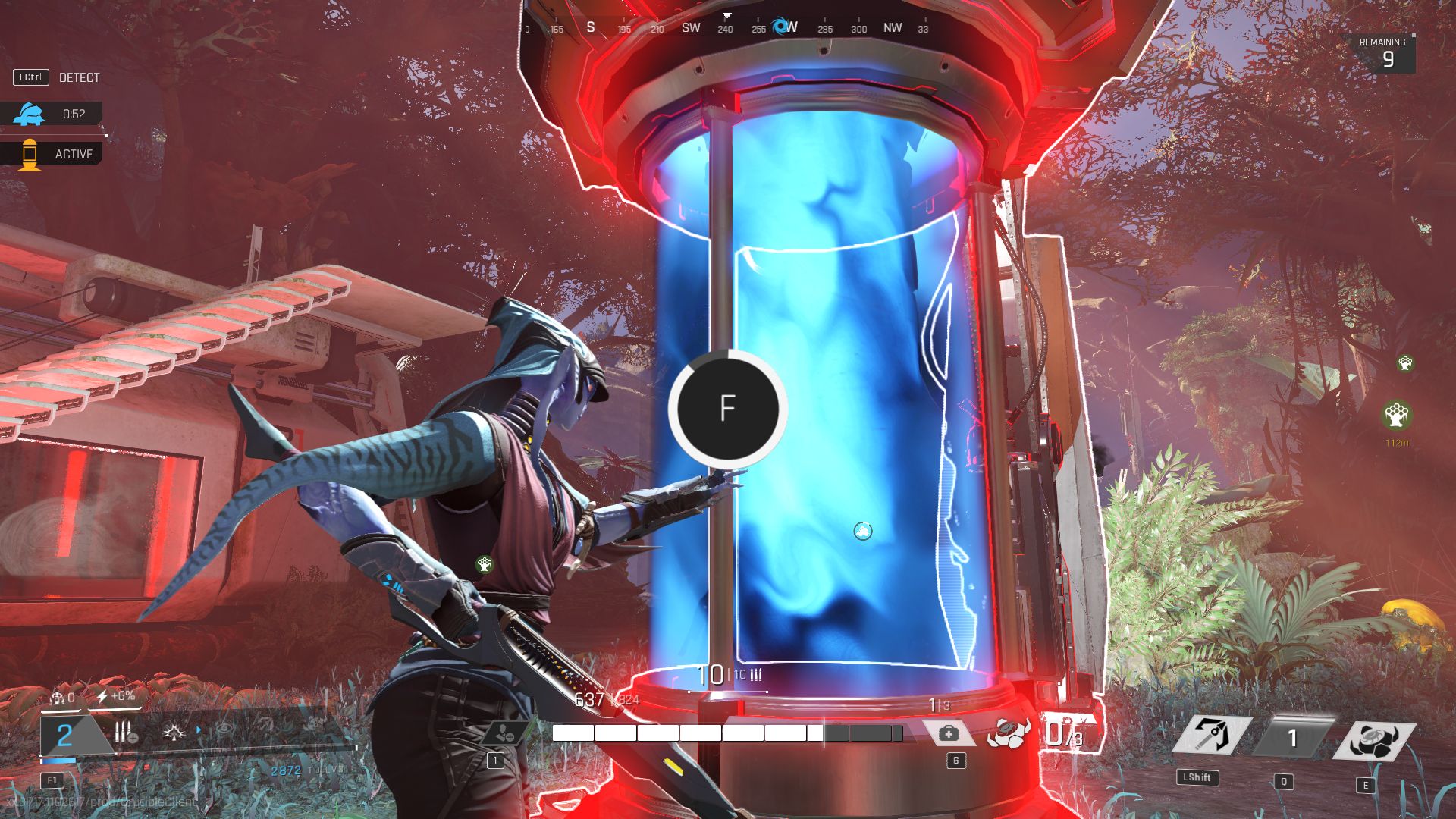 Right, back to that bus. Full throttle, now: the shooting doesn't feel good. Whittling away at health bars is always going to lack the insta-killing gratification of a headshot, but the problem runs deeper than that. Either there are no reaction animations or they're too subtle for me to notice, but either way the guns feel piddly. They do vary, and some weapons feel better simply because they are louder, but it's not enough. All of the characters have distinct fighting styles, and varied (if largely familiar) abilities - but with one exception they all still do most of their damage by clicking on people. When that fundamental interaction feels so lacklustre, it's time to pack up and go home.

I should acknowledge I've enjoyed a few fights despite that. Those are invariably when abilities have come into play, and I've done something tricksy with Ajonah's grappling hook. I like running away and biting my nails while I pop a health kit, knowing that taking any damage will interrupt and doom me. Sadly, those moments are all too rare.

It pains me that I'm pouring so much criticism on a game with such a generous grappling hook, but here we are. Even a ludicrously long-range, short-cooldown hook with a proper swing to it can't swing my opinions. I mostly play as that sharkboy now, because he's the only fully melee character. A large part of what I do in fights is run up to people and hold down my mouse button, and it's damning that I prefer this. 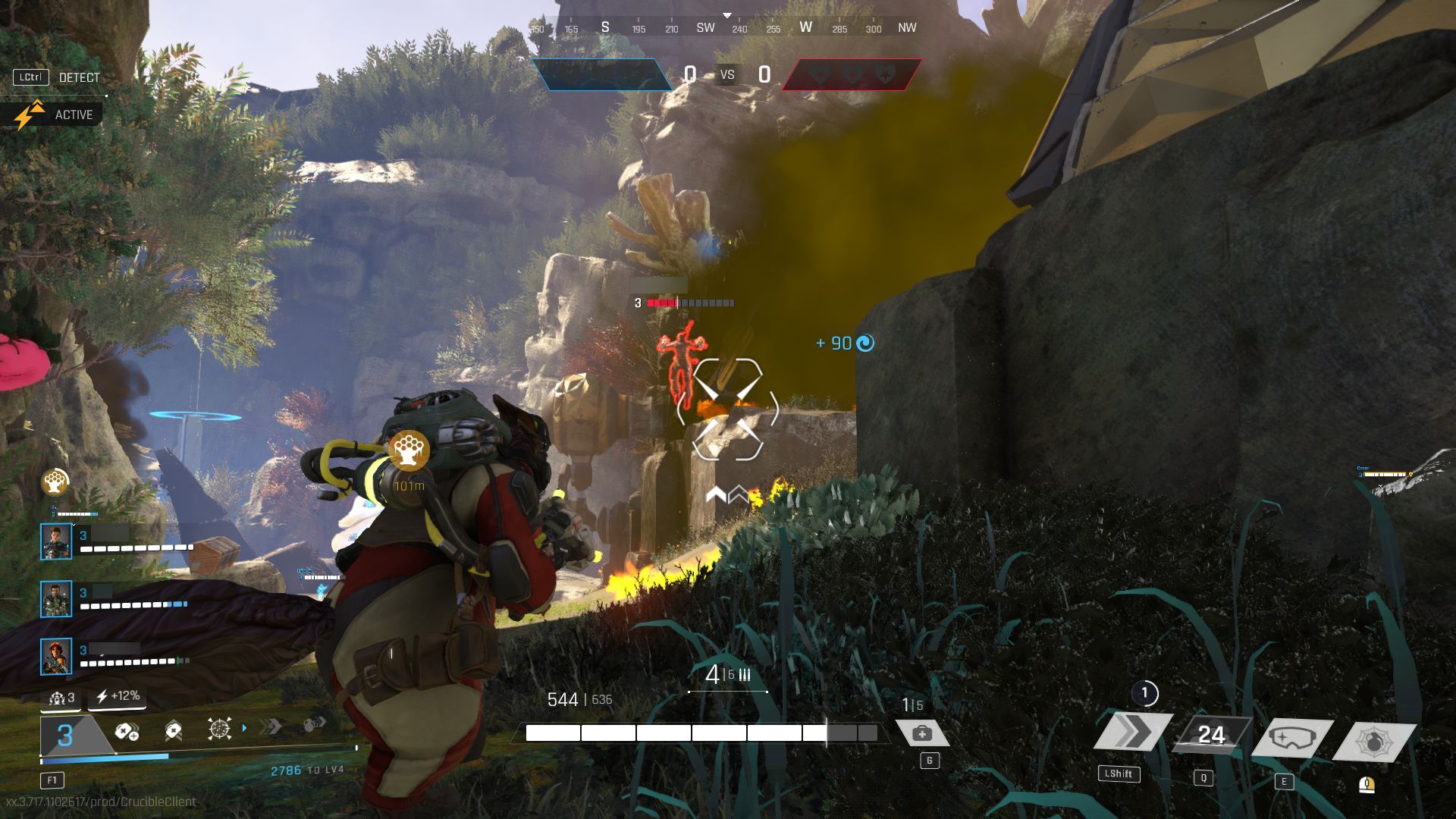 I might not like how the characters play, but I do like how they look. There's a teleporting squirrel, and a charming turtle-ish being with a belly and a baseball cap. There are five human characters, but not a single white man amongst them. We're still over-represented when it comes to heroic roles in videogames, and I admire any game that moves away from that. Even those that aren't ultimately very good.

There are other missteps. The lack of text or voice communication might mean Crucible dodges the toxicity bullet, but those are vital tools for coordination in a game designed around teamwork. In the heart capturing mode, it's a massive shame that doing damage to whoever's hoovering up the heart doesn't interrupt them. That robs clashes of tension, neutering the possibility of exciting back and forths. There's also a third mode I haven't mentioned, where two teams of eight squabble over harvesters. The fighting there is both more constant and more chaotic, and doesn't do much for me beyond ramming home its failings. 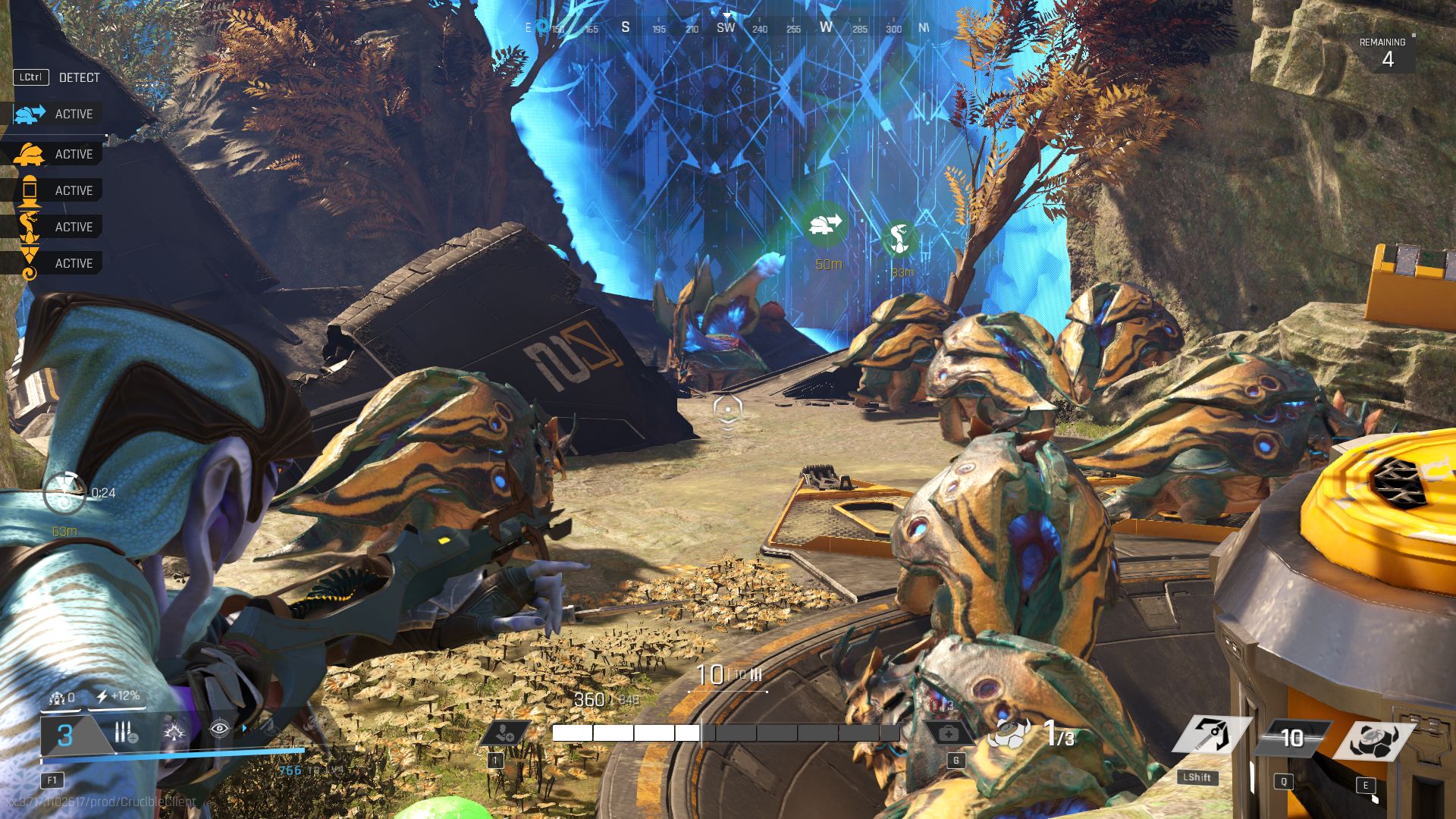 On paper, Crucible was built for me. It's a MOBA-infused hero shooter with an emphasis on mobility, with a diverse line-up and some interesting new ideas. In reality, I'd rather play any of the many games that grapple with just one of Crucible's heads, and pulls it off far better. This hydra might be sprawling, but none of it looks healthy.