A few minutes ago, Crusader Kings 3 was announced at PDXCon in Berlin, with an actual choir of hooded figures, and this splendidly grim trailer. Predecessor Crusader Kings 2 is still going strong after nearly eight years, with its last expansion launched last November, but now it's time for that old warhorse to be put to pasture. Or perhaps become pope. Either way, it's free to play now.

But what's in store for budding Dukes, Caliphs, and Holy Roman Emperors in CK3? Luckily, I spent the start of the month with Paradox in Stockholm, where even a thematically appropriate run-in with blood poisoning couldn't stop me soaking up all there was to know about the grand strategy behemoth under construction. I’ll be posting some longer pieces getting into the meat of the game in the weeks to come, but for now, here’s a summary of what we know so far:

After more than four years in development, there's still a lot of work to be done on Crusader Kings 3, and while Paradox are confident in pinning it to 2020, my intuition is that a release before summer would be a surprise. According to the designers I spoke to, CK3 already "far surpasses" the range of features CK2 had on day one, and already covers content from many of its predecessor's DLC (for example, the 867AD start date from Old Gods). Still, expect "depth rather than breadth" - I get the feeling Paradox want to make a statement with the level of polish at launch, rather than recreating seven years of CK2 expansions.

2. It’s easier to play than Crusader Kings 2. Sort of.

Game director Henrik Fåhraeus says Paradox wanted to make a sequel that "should be more approachable, easier to get into," than CK2, but that they also understood this clearly isn't the main concern for series fans. Rest assured: Crusader Kings 3 looks anything but simplified. Still, a lot of time and money has been poured into a more user-friendly UI, and it shows. There are tooltips everywhere, and information seems less buried in menus and secret-feeling windows. For new players, an inobtrusive "suggestion" window offers information at a glance on what's possible at any given time - what titles you're in line for, what wars could you start, who needs marrying off, etc. It's easy for veterans to ignore, but it's a useful dashboard. Also, Ireland - long CK2's "tutorial island" - is now the setting for an official tutorial. 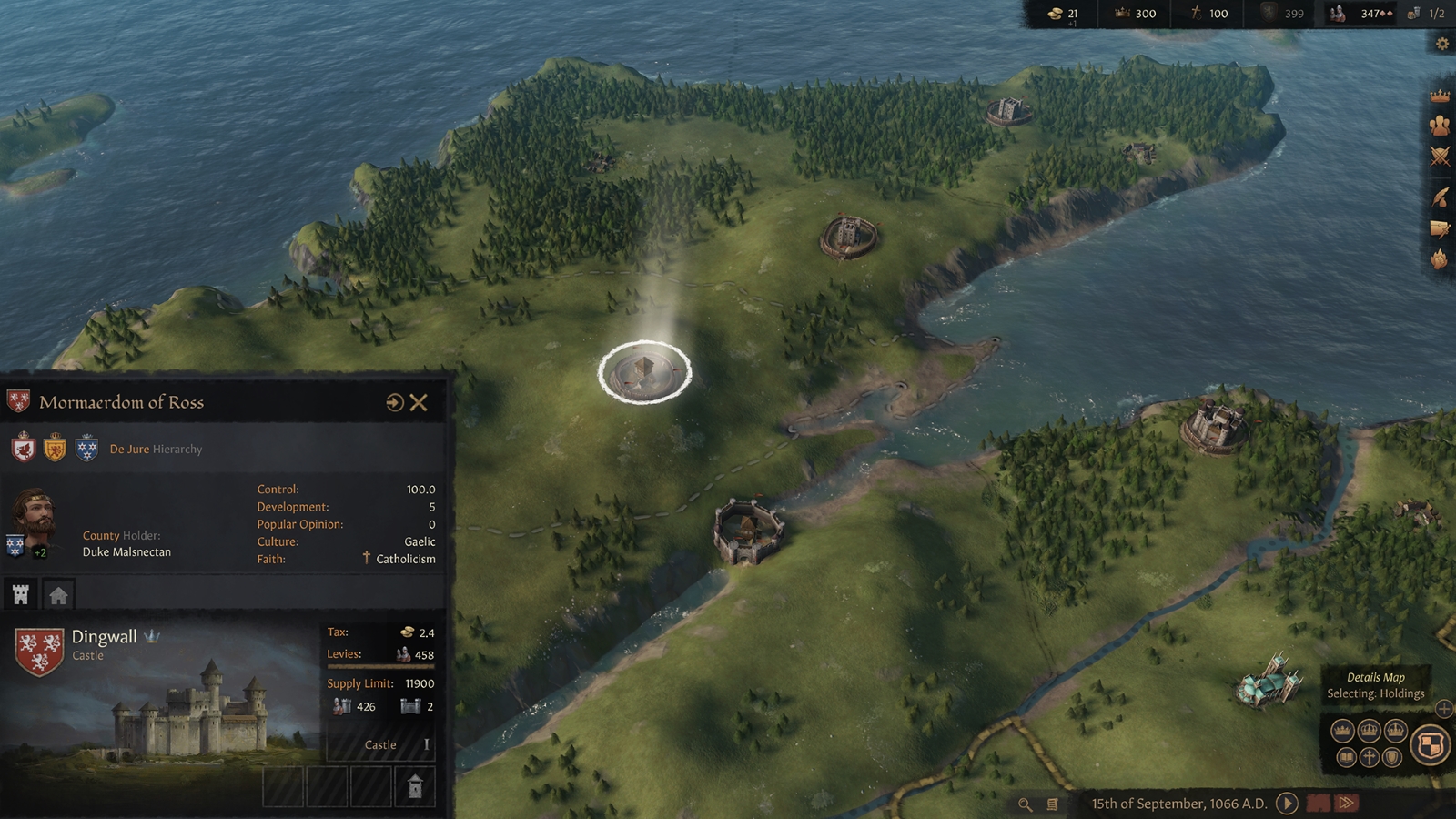 3. You can make a dynasty of giants.

If your CK2 playstyle tended towards creepy medieval person-breeding, you will enjoy Crusader Kings 3. There's a full genetics system, and a lot of attention paid to transferring characteristics across generations. And it won't just be your ruler picking up traits and quirks, either - as your dynasty spreads across the world via marriages of convenience, and the family name becomes more storied, you'll be able to spend your renown on persistent perks for your entire lineage. One of these perks is the ability to boost the retention of congenital traits in your family, meaning if you're dead set on a breeding program for near-mindless haemophiliac colossi, you're probably in luck.

4. And you can make them cannibals, with the church's blessing.

Following on from CK2's Holy Fury expansion and its experiments with designing religions, dynamic faiths and heresies are going to be a big deal in Crusader Kings 3. Making drastic changes to your kingdom's religion won't be without consequence, but if you're truly committed, it looks like it'll be possible to make a version of Catholicism where it's absolutely fine for your dynasty of monstrous titans to gorge themselves in secret, holy cannibal rituals. Sounds reasonable. 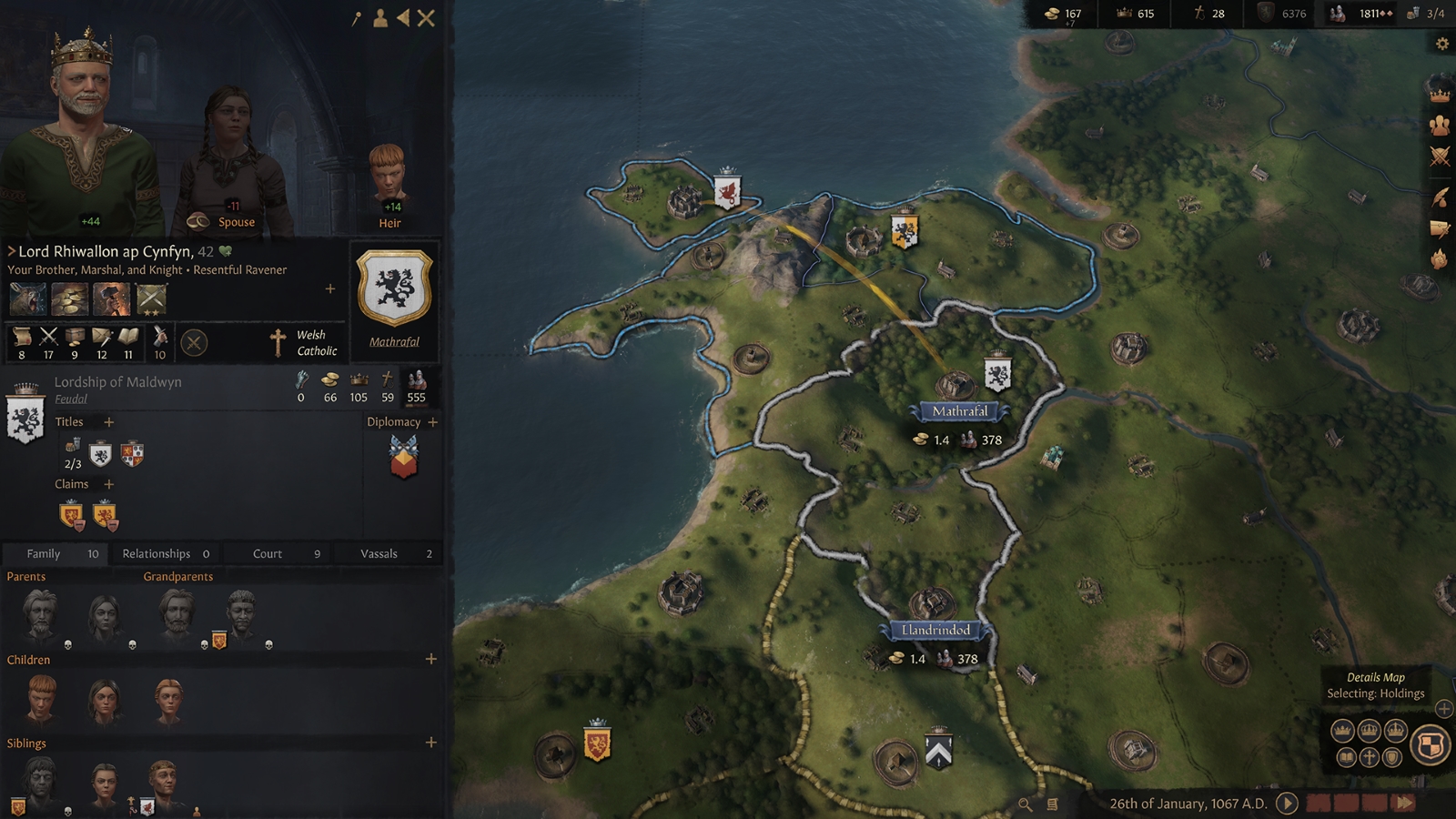 5. Being a complete git will be more fun.

Intrigue, arguably not much fun in CK2, has had a bit of a glow-up for Crusader Kings 3. There's a lot more sneaky stuff to play with, including "hooks" - essentially, owed favours, or dirt that you've dug up on opponents - which will allow you to manipulate otherwise untouchable characters. If you catch a rebellious baron doing a rudoe behind the medieval bike sheds, for example, you might be able to blackmail him into a harsher feudal contract. Schemes have also been improved, with plots relying less on amassing hordes of randos up for a crack at a hated rival, and being more about finding crucial co-conspirators.

In the years since CK2's release, "Deus Vult" - an eleventh century crusader battlecry - has become a vile meme beloved of racists on the internet. I asked how Paradox's community team felt about this, and was told emphatically that the words will not appear in Crusader Kings 3. That's refreshing, but in a game set during a time of conflicts fetishised by modern fascists, it's the tip of the iceberg. I'll be writing more about how Paradox are handling the political sensitivities of making a game about the crusades, and how they're handling the representation of non-European cultures, in the weeks to come.

Update - Henrik Fåhraeus offered this comment: "I feel like this issue has been miscommunicated thus far. We have not specifically considered which terms are used in the game apart from making sense in the historical context. The team will decide how any text fits or does not fit into CK3 in a way that feels appropriate." 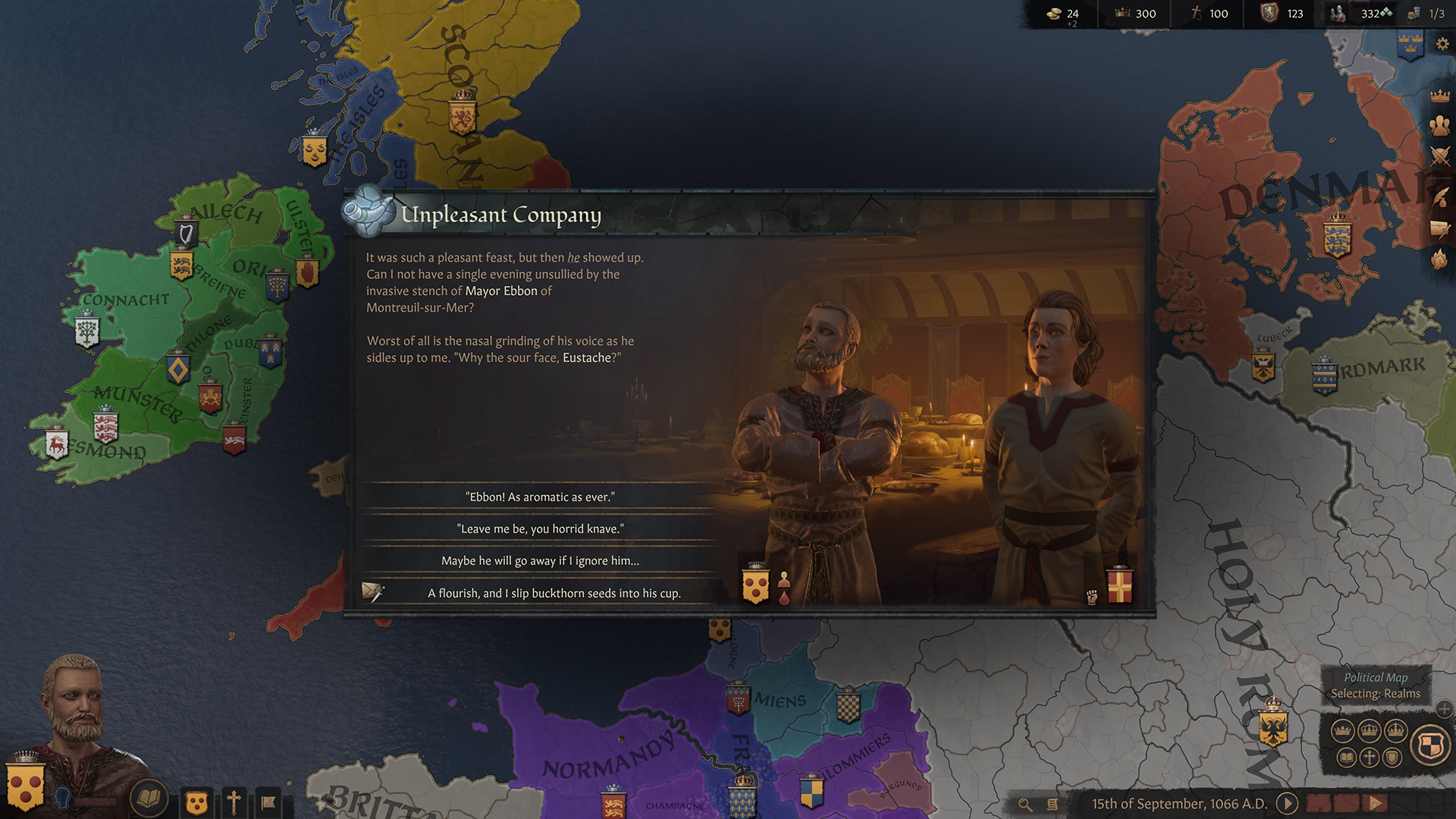 7. There's a lot of potential for roleplaying.

While it's not lost any of its strategy chops, Crusader Kings 3 feels a little more like it's leaning into its RPG DNA. This is thanks in part to the new animated character portraits (complete with the aforementioned modelled genetics), and the procedurally generated, personality-based string descriptors ("callous maniac", "bold blackguard"), that appear beneath them. Fåhraeus told me "this is a game about characters, so characters should matter in every single feature" - expect to see your ruler's character, and that of your rivals, factor heavily into everything from event generation to technological progress.

Perhaps most RPG-like of all of Crusader Kings 3's new features is the addition of actual skill trees, based on the mechanics introduced in 2014's Way of Life DLC for CK2. At present, it seems there are three branches attached to each basic lifestyle choice, with perks named things like "engineered for destruction", "living off the land" and "wash your hands". Roleplaying is further encouraged by a stress mechanic, wherein your character can suffer increasing health impediments should you choose to play wildly against type. 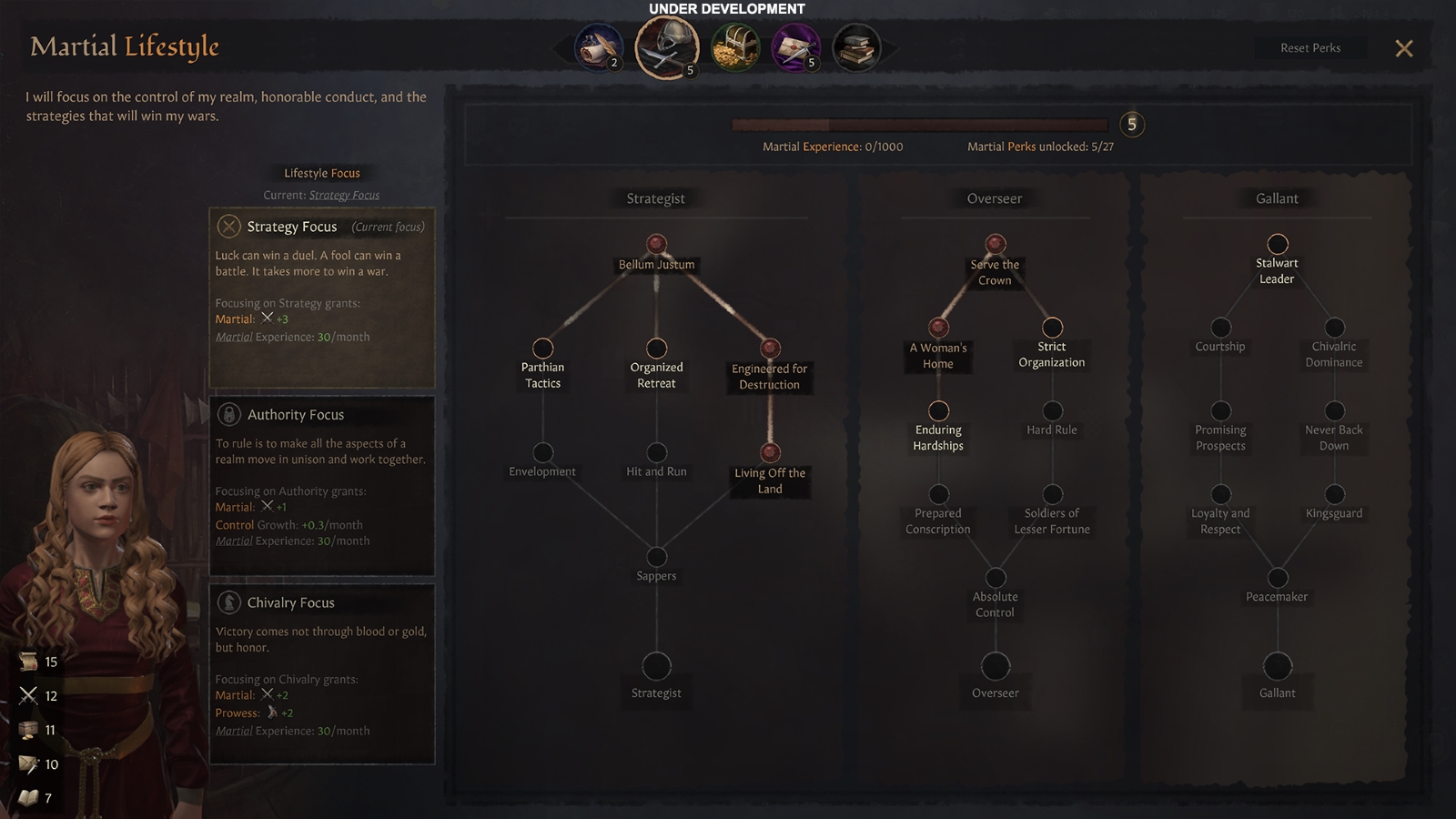 9. Knights are more of a thing.

As well as the named leaders of your armies, fighting forces in Crusader Kings 3 now have actual knights - named characters from your kingdom, who could be landed nobility or courtiers - embedded within them. Apparently, depending on their combat skills, they make a big difference to the way battles play out, although I've not seen much of the new combat system yet. Siege weaponry is also now in the game, which is exciting.

As stated at the top, CK3's announcement has coincided with Crusader Kings 2 being made free to play. However, in a shrewd move by Paradox, this offer will not include the game's many, many DLCs. Still, it means that players looking to start developing their carousing and son-stabbing skills in advance of CK3 have more reason than ever to jump into what Adam called in his Crusader Kings 2 review, "probably the most human strategy game I've ever played".