When I turn my mind to choosing the next game for Past Perfect, I tend to pick between one of two agenda. The first is to replay a game I remember really enjoying to see if I was right to. The other is to replay a game that has a terrible reputation to see if it's deserved. I think it's obvious Daikatana appears in the second category. But surely, surely, no game can deserve the ire this one received? Surely it must have been a response to an extremely ill-advised marketing campaign, promising the Earth and only delivering an FPS? Played 20 years later, it seems entirely reasonable to assume it'll just be a mediocre shooter that was crushed beneath the weight of impossible expectation? I have written these words before I've started playing.

It's probably fair to say it doesn't start off so well.

You remember the backstory for Quake, right? That, um, there's a big brown temple full of stuff to kill: go kill it. And you'll likely remember how that absolutely ruined the game. Awful it was, just dumping you straight in to one of the best FPS games ever made without pratting on about why you were there and how important you were for humanity. That's why today you can barely find a person who even remembers Quake. 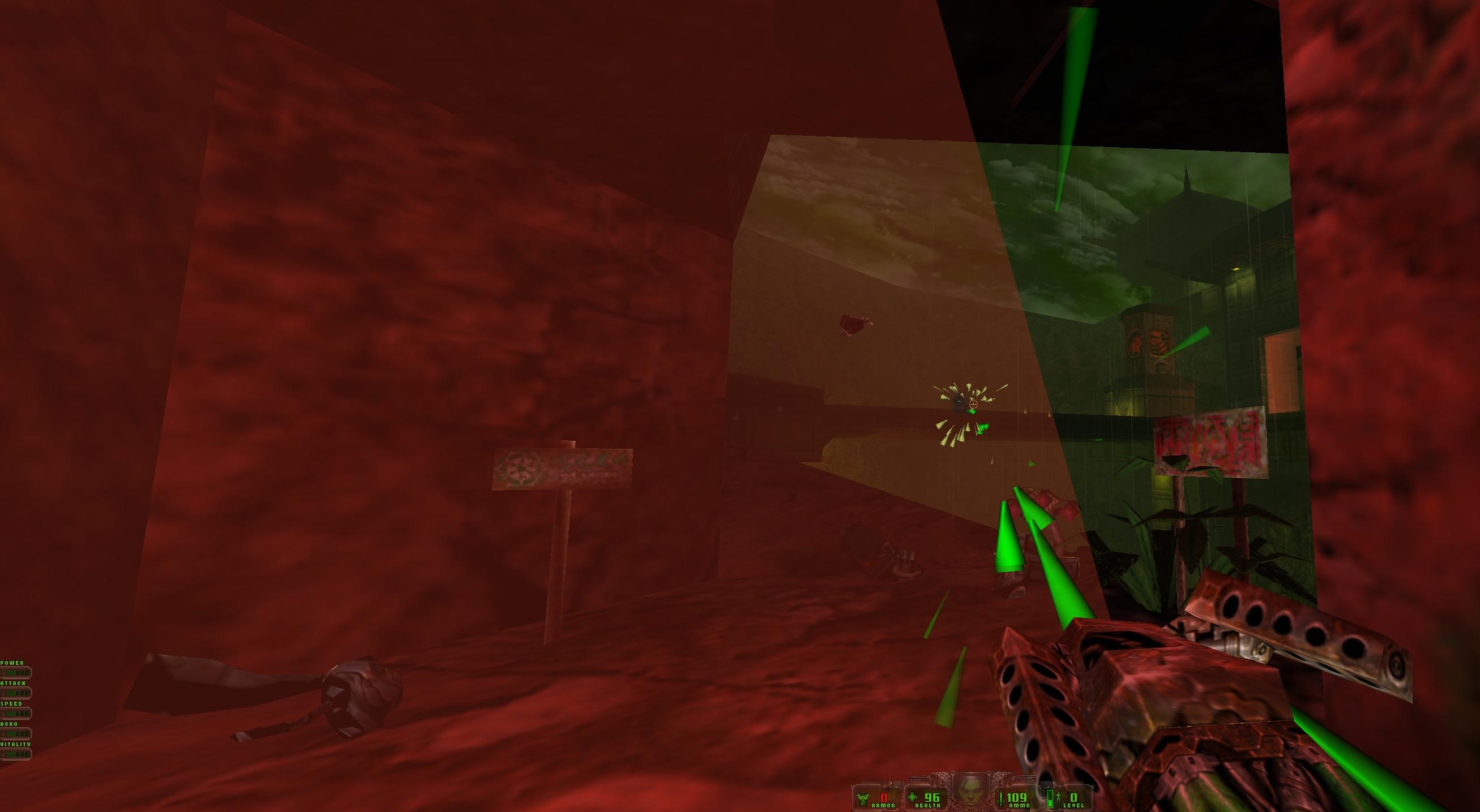 So thank goodness when Daikatana came along they put all that right, and added an introductory expository sequence long enough to make up for the lack of one in Wolf 3D, Doom, Quake, and every sequel along the way. Somewhere between ten minutes and seven thousand years long, it tells the story of how one man wants another man to find a sword. Sorry, no, I mean, it takes that long for one man to tell another man he wants him to find a sword.

Oh good gravy, it's interminable. I genuinely nearly fell asleep leaning my head on my hand at one point, startled back to attention by my kid waking up to go to the toilet. The old Japanese man was still telling the white American man that he wanted him to get a sword. It's a very special sword, cuts time or something. And it's in a volcano. Then, mercifully, as the heat death of the universe edges dangerously closer, it ends with your arrival in a marsh, armed with a gun, facing a disturbingly green waterfall. 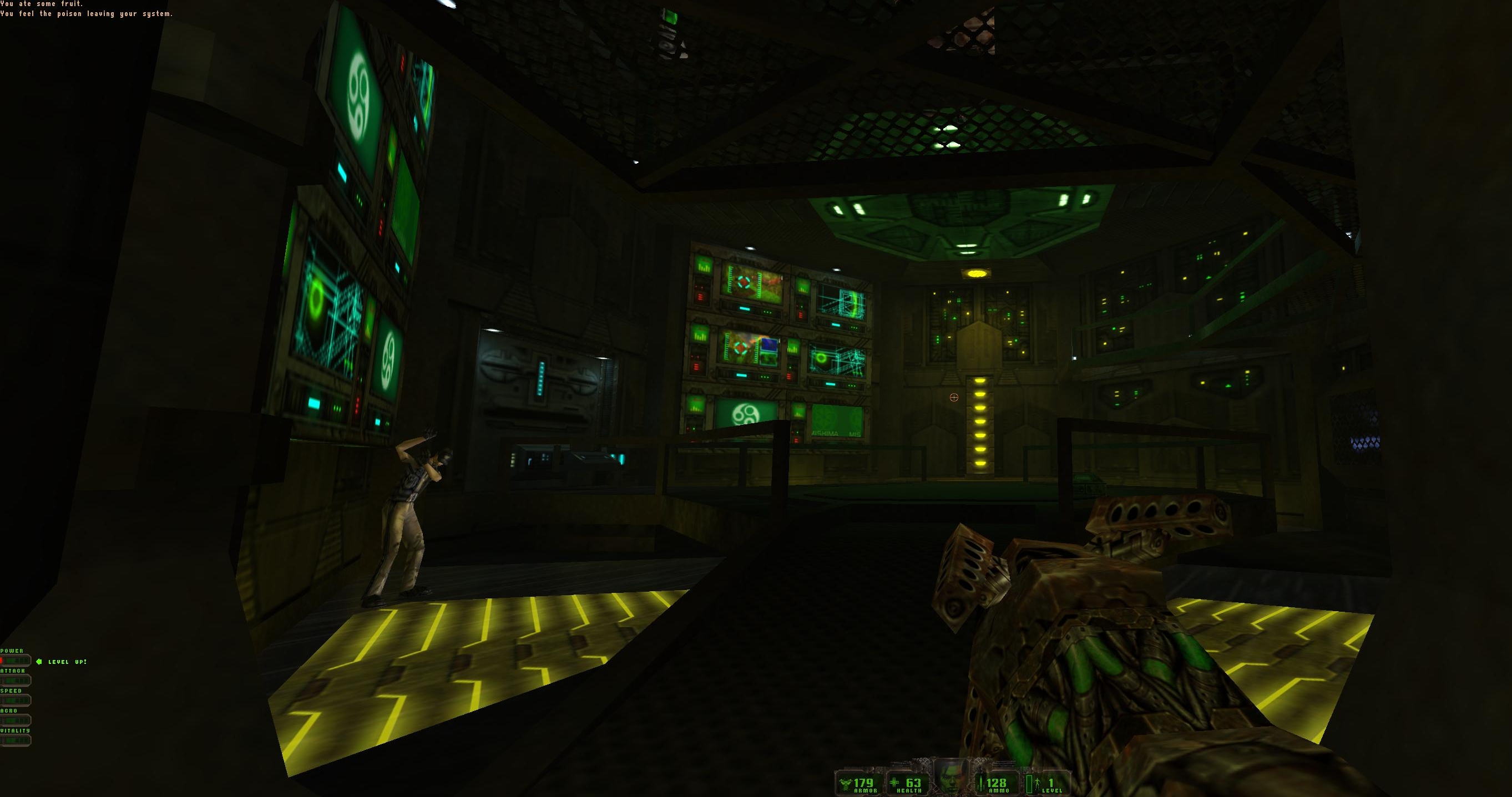 It's eminently reasonable to say it doesn't immediately get any better.

Doom and Quake were brown, so it's something of an advancement that Daikatana sports two predominant colours. I mean, I wouldn't personally have chosen brown and green, but still, progress. Slightly more problematic is the placing of you in a high-walled canyon facing a neon-green waterfall, and then covered the floor in ever-so-slightly raised objects that make it near impossible to move around. And then attacking you with thirty giant mosquitoes and tiny poison-spitting froggies, while completely concealing the very first path of the game in a pool of toxic-looking slime. As opening moments go, it's down there.

You're then faced by approximately five trillion more mosquitoes and frogs as you wind your way through the miserably tiresome fragmented levels, moving from the green/brown marsh to the green/brown sewers, before things are dramatically livened up by the appearance of a red/brown prison followed by a red/brown crematorium. It's like a checklist of all the grim, dreary levels found in every other game, compiled together for maximum dinginess. 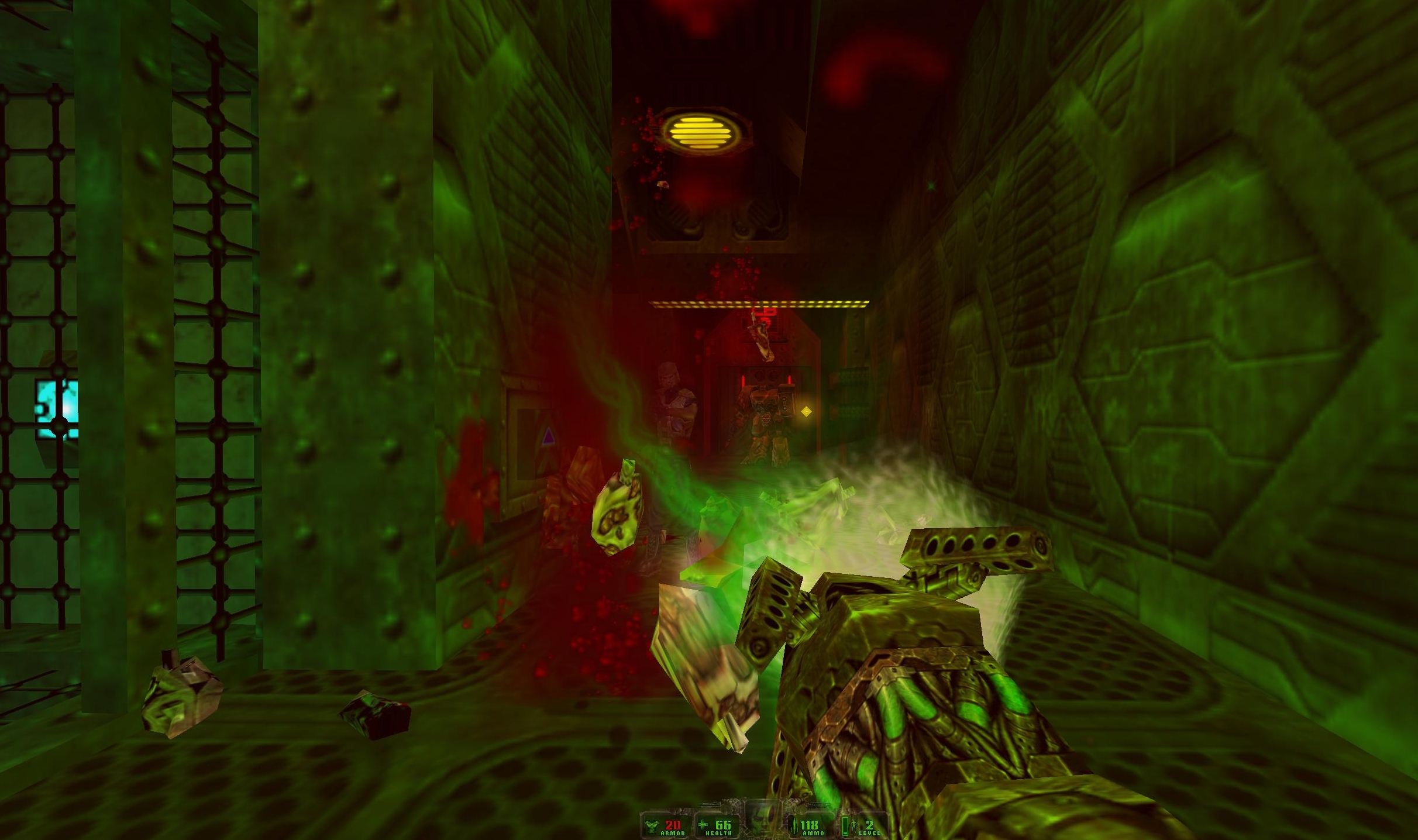 And that is as much of Daikatana as I'd ever seen before. Not having found a way to be paid to play it any more than that, I didn't. Why would anyone? It was hateful. It's not just the monotony of the art, nor the soul-itching irritation of the fiddly buzzy enemies - it's the level design. The one thing you'd never expect to be the very worst issue of a John Romero game. But wow, it's atrocious. At every point, every single level seems to go out of its way to be as horrendously laid out as is possible. The game would probably be about ten minutes long if it were ever clear in which direction you were supposed to be going next, rather than offering you three different choices, none of which actually go anywhere at all, with a fourth correct route hidden behind a secret door or requiring you to magically divine that you need to backtrack because a previously closed off way will now suddenly be open.

I played an awful lot further. That never improves. 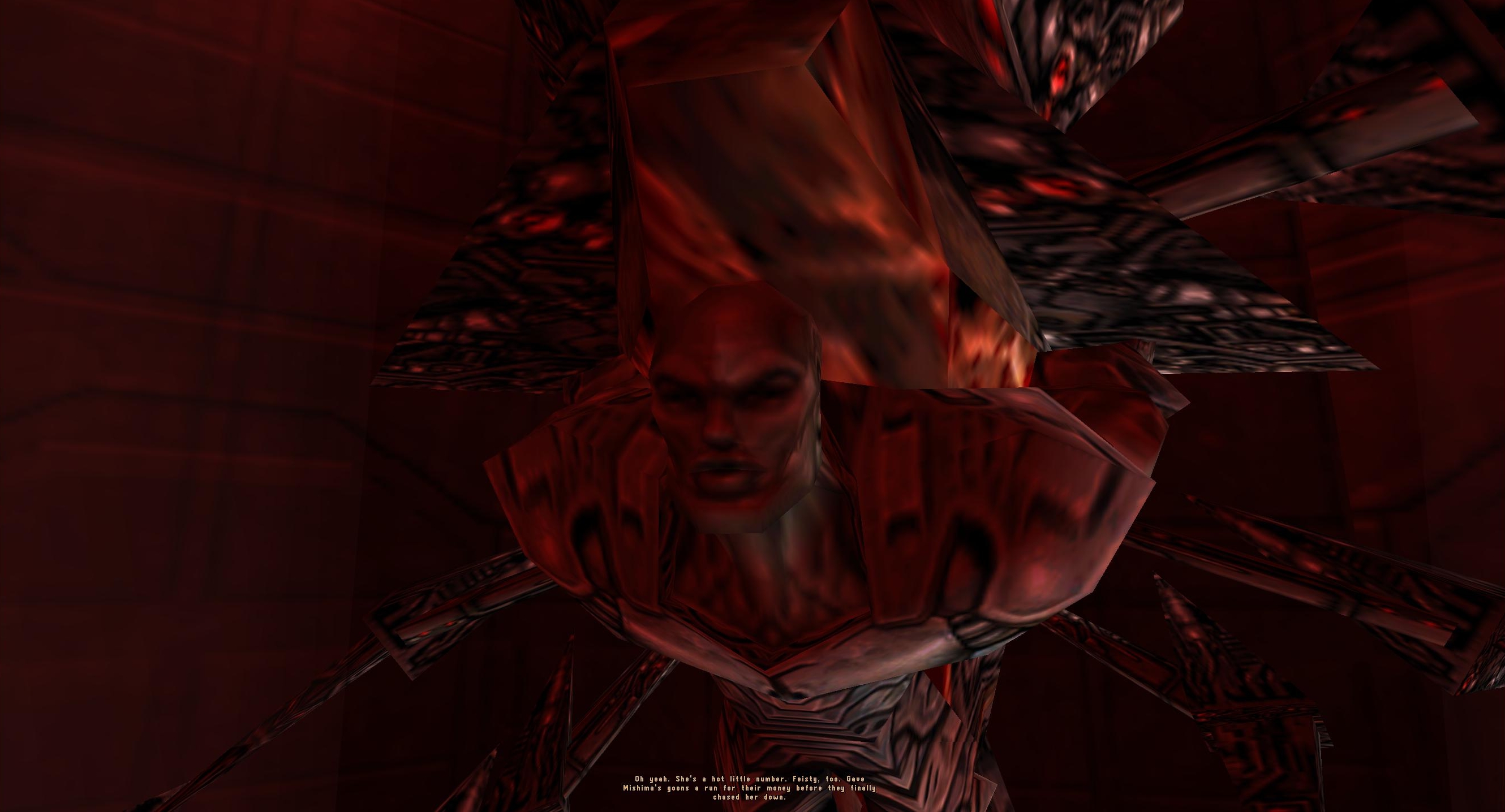 I honestly had no idea that Daikatana was a) so massive, nor b) also set in Ancient Greece, rural Dark Age Norway, and the near future San Francisco. I shall confess I have given up in Norway, after I've gone so far into a completely bugged out level that I cannot face the notion of repeating even a little section just to see if I can dig my way out of a hole of its own creation. I'm not paid nearly enough to do that. And in not realising those things about Daikatana, I'd also not realised how much it looks like an Ion Storm game.

That might sound stupid, since it's an Ion Storm game. Romero co-founded the studio, and Daikatana and Dominion: Storm Over Gift 3 were both released before Deus Ex and Anachronox (albeit only by a matter of weeks between Daikatana and DX). Both those disastrous releases came from Romero's Dallas office, about whose profligate ways have been written more than enough, while Deus Ex came from Warren Spector's Austin studio. But the art style between both games is strikingly similar. Which is further strange considering Daikatana was built in the Quake II engine, and DX in Unreal. A list of things made even sillier when I then observe that Daikatana plays far more like an Unreal game than anything Romero had made before.

The point being, it's quite clear as I play this silly game that it was always intended to be so much more. I know reams have been written about the development issues of Daikatana, of the legions of staff who left during production, about its clumsy switch from Quake I to Quake II, and of course the monstrously awful marketing that embroiled the entire process in a reputation it could only ever live down to. But I'm just writing about the experience of playing the game now, and what feels really apparent is that at some point someone was hoping this game would be a lot more involved. I think the biggest clue to this is the barely implemented skill system, that never mentions itself, embarrassedly flashing a tiny red light in the corner, and barely seems to make a difference when used. But surely it was meant to be something much more. 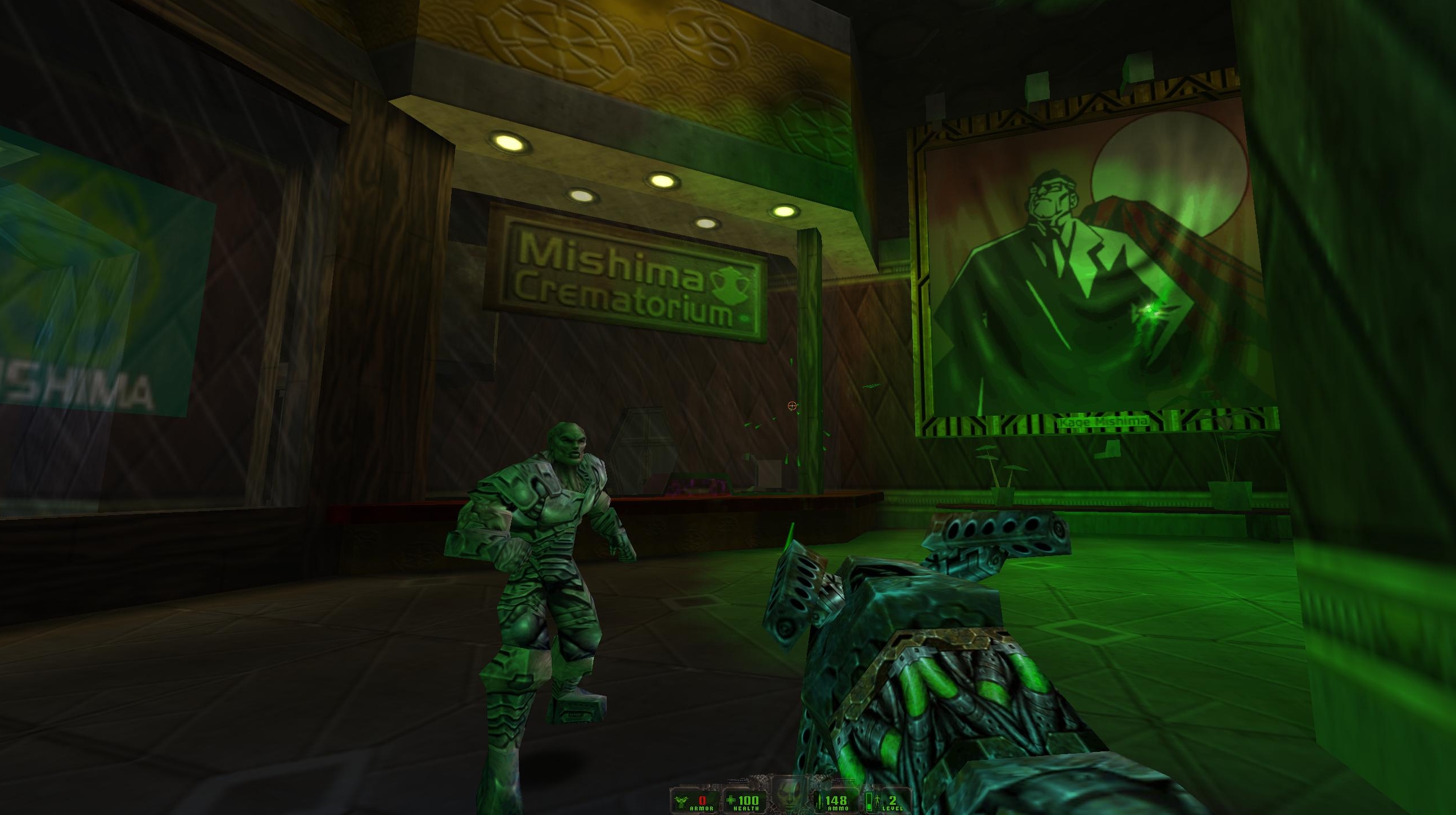 It's a globetrotting, time travelling adventure! There's a cast of characters, who all talk ALL THE BLOODY TIME. There's an awful lot of something that could be generously described as a plot. It's hard not to get a feel for what was conceived, rather than what was delivered. You know, in between being viciously beaten around the face and neck by what it actually is.

Oh boy it's horrible to play. In the early stages you're only fighting against the inane layout of the levels, but by the end of the first quarter you're joined by two permanent companions in the form of Superfly (urrgghhh) Johnson and Mikiko Ebihara. At which point the entire game becomes... Well, do you remember that in the early '00s, games were plagued by some seeming obligation to include an escort mission? You'd have to abandon your free-wheeling ways and worry about getting one or two NPC characters to the other end of the level, and it would always be the absolute worst bit and all the reviews would lament its inclusion. That's all of Daikatana. The vast bulk of this very, very long FPS is a ghastly escort mission in which you must guide two of the stupidest people ever imagined through every instant of its tortuous levels. 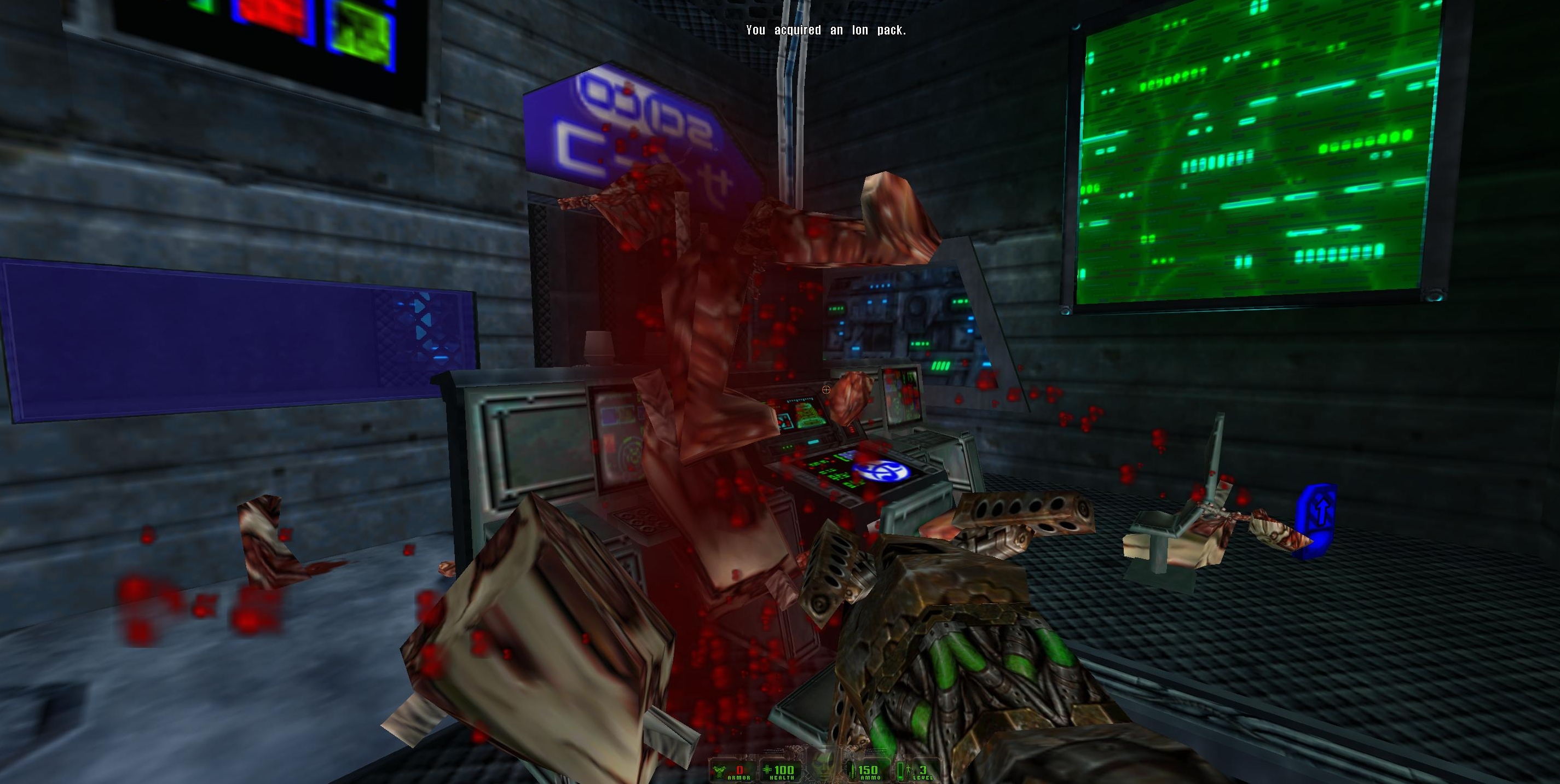 Extraordinarily, they're invincible. I say extraordinarily, because to have them be capable of dying and thus further ruining every moment of playing would seem so appropriate for the game. But worry not, they make up for this is myriad ways. Like getting stuck. They get stuck in rooms with opening doors. They get stuck on staircases. They get stuck by madly launching themselves into chasms. They get stuck on the nothing at all, endlessly running on the spot half a foot off the ground, with nothing impeding their progress anywhere near them. And each time, you have to notice they're not with you (made harder by their always been 20 metres behind because they're so incessantly useless), backtrack, and then push them back into action. I've had to retrace entire multi-part levels trying to find these imbeciles, something made even more infuriating when you've only lost the one of them, so have to do this trying not to also lose the other.

Eventually this is what got the better of me. After many, many hours, I had just completed an extended sequence in Norway, none of it even mildly entertaining, and discovered that (nnrrgghhh) Superfly was missing. So I re-ran the entire area, and he was nowhere. So I then ran the surrounded larger level, and he wasn't there either. And the thought of reloading and doing any of it again felt like and act as mad as deliberately contracting the flu. 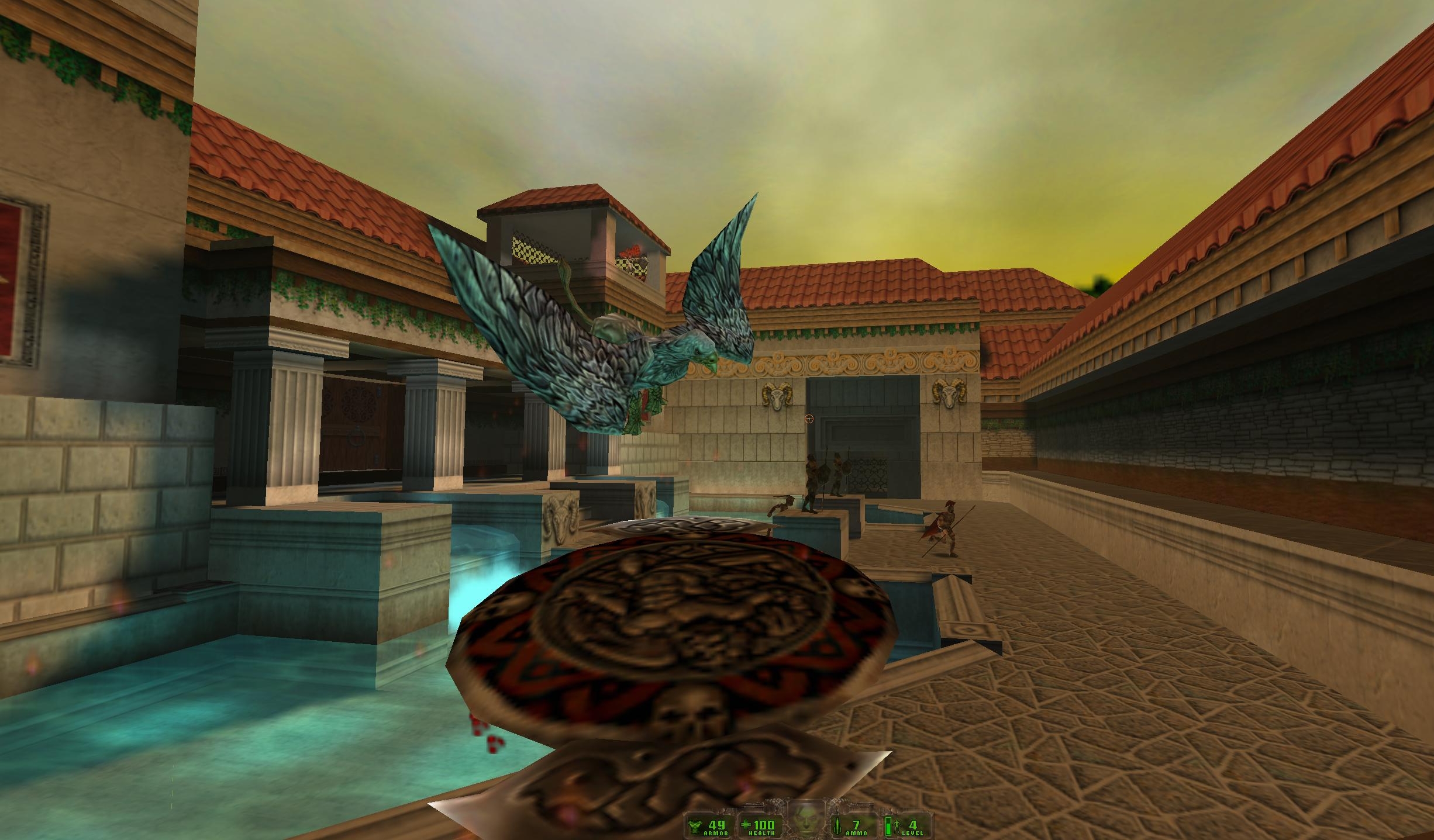 Oh everything is bad! It's so odd! The weapons are just so daft. Each new setting you're given a starting weapon that's so massively overpowered that you rarely need to bother with the even blastier ones that come next. Most are just too annoying to use, far more likely to hurt you than anyone else, the game so glitchy that mines or rockets more often than not find an invisible bit of scenery to catch on than an enemy to turn into gibs. And when you get the Daikatana sword at the end of the first chapter, after so much build up of its legendary prowess, it's frankly funny that it's more feeble to use than the initial punching glove you started the game with.

And yes, it does gibs, and everyone explodes messily, but it's artless and charmless and tiring. The textures are so haphazardly applied that everything looks like a flagged secret door, except of course for anything that's a secret door. And while boosting it to modern resolutions and with improved details via the improbable existence of still-maintained Daikatana 1.3 fan project, nothing can fix what a leaden lump of clumsy unfun it truly is.

I am however going to end by boldly saying one thing in Daikatana's favour: it features the medical vending machines called "Hosportal", and that is an excellent joke, and no one can ever take that away. 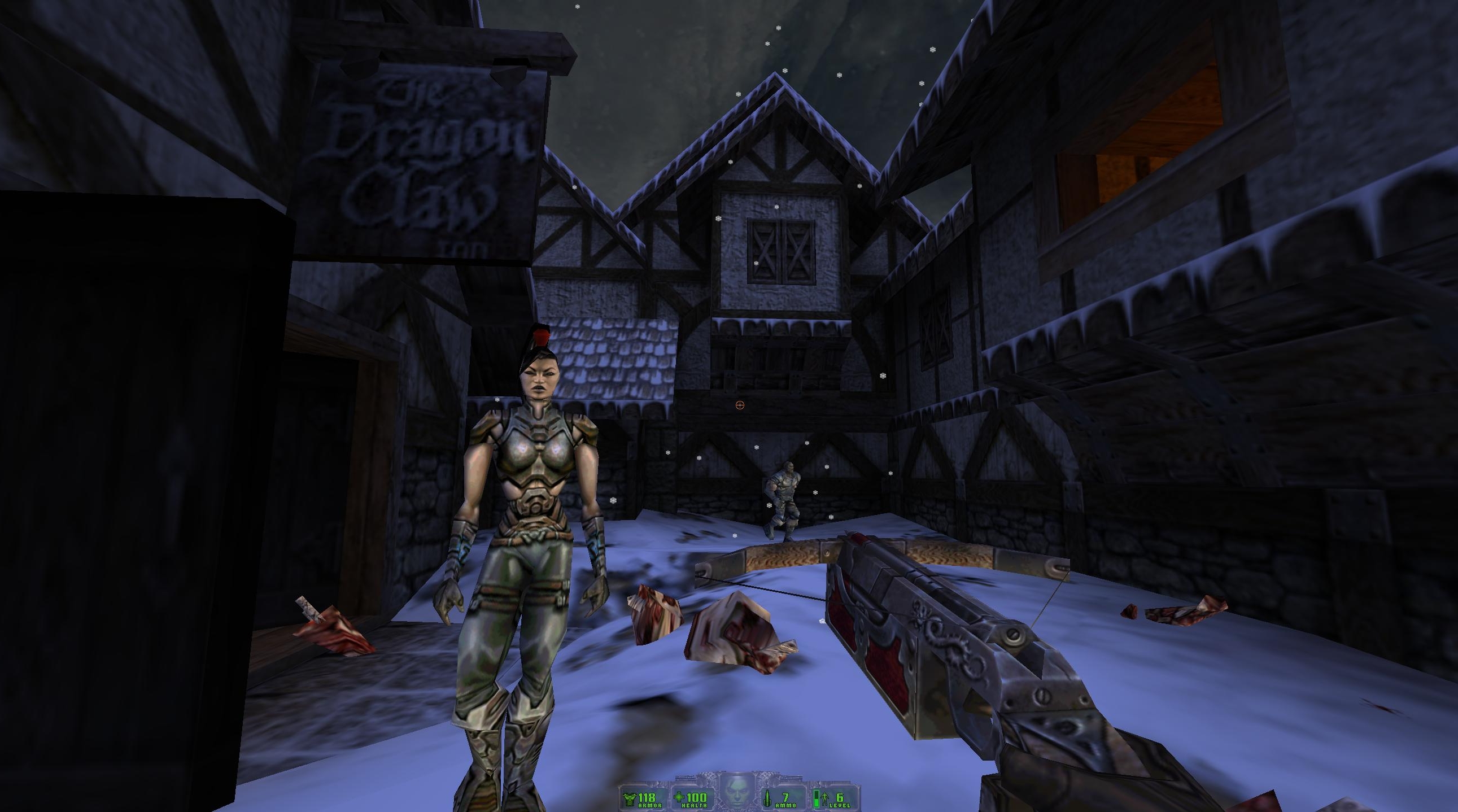 Can I still play Daikatana?

Yes, thanks to the aforementioned unofficial 1.3 patch. It's worth noting there are issues with the 64bit version, that for me caused it to crash all the time. Switching to the 32bit patch fixed this, but horrifyingly saves weren't compatible and I had to start the godforsaken game over again. You can get it on GOG or Steam for around a fiver.

Should I still play Daikatana?