Ark: Survival Evolved, the current king of dinosaur hill, is not a simulation of any kind. Saurian meanwhile, new on Steam Early Access this week after a successful Kickstarting a while back, is a survival game that similarly appeals to our first childhood love, but wants to be more Walking With Dinosaurs than Jurassic World. Which is to say, a dinosaur life simulation based on contemporary science's best guess as the thunder lizards' lifestyle. The release version so far is fairly short on things to do, but has some meticulously-recreated dinos, the option to pick a doomed fight with a Triceratops, and the significant risk of getting eaten by your own mother.

My chief concern, after a few hours with Saurian, is less that it currently has only one playable species (a semi-feathered Dakotaraptor) and little to do beyond roaming around a large, unconstrained prehistoric environment looking for lizards to eat and water to drink, and more about whether it can find the fun no matter how many dinos wind up in it. Wild animal lifestyle, no matter how large and toothy, inherently involves grinding through the same activities.

There are, after all, very few games which have pulled off animal simulation truly successfully. We've got Shelter, which leaned heavily on cub-death tragedy in order to lend itself drama and characterisation. We've got the earlier stages of Spore, but there's a good reason they only last a portion of the campaign - as any parent knows, watching something feed and grow is only entertaining for so long. Then there's Maxis' SimAnt, which I would cautiously posit is more legendary than it is truly loved.

Right now, Saurian depends on this sort of moment...

...happening frequently and differently enough to offset the repetition inherent in skulking about finding food and water in order stop your status metres dropping too low. Which, sadly, is not the case. For this initial release, I'm afraid we're rather closer to...

...but not that bad, as though the central finding/feeding activities get old fast, the controls feel simultaneously treacly and mechanical rather than dino-fluid and there isn't much AI to speak of, the clearly meticulously-researched beasts look pretty damn decent, and move well too. Saurian isn't particularly well-optimised yet, and there's some roughness to the environments, but it's not a huge stretch of the imagination that it could wind up with better lighting and frame rates.

The first sighting of a triceratops through the trees is a treat, getting snatched into the water by an amphibious, croc-like creature is briefly horrifying, and, if you're really lucky, you might catch sight of Ian Tyrannosaur stomping about the place. Later on in development, the plan is to make some of these species playable, though I suspect this is not a cheap endeavour and will depend on Early Access going well. 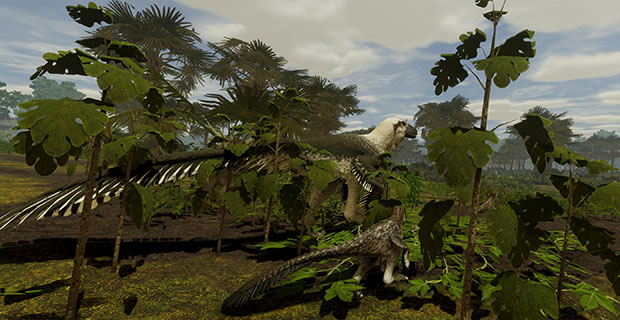 There are brief flashes of what this game could become. A failed strike upon the armoured hide of a Triceratops enrages the creature, and it turns its mighty horns towards you and gives chase. You, as a raptor, are frail against this, although speed is on your side.

Then there is the brutality of the early raptor lifecycle. At your youngest, older raptors will simply ignore you, leaving you to fend for yourself, but once you reach adolescence you're deemed a rival for food sources and will be attacked if you get too close to a grown-up. I say 'attacked', but right now the impression is that the other dinosaur simply walks over you, resulting in instant death. Gets the point across, I suppose, but we're not exactly red in tooth and claw yet. 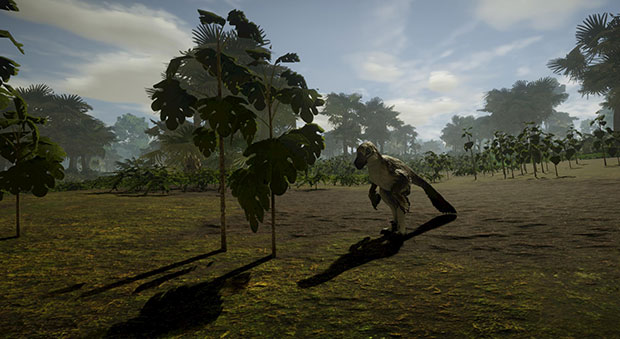 But these, along with using a faintly irritating scent-tracking system to catch enough lizards to make yourself grow bigger, are events you'll experience within a couple of hours, with little else to experience beyond that.

I'm curious to see where this could feasibly go, again beyond the obvious 'more monsters!'. Makin' babies? Surviving the seasons? A fully-fledged fight system? Moving to new habitats once the current one is stripped of food sources? Evolution?

I don't know. I worry about Saurian. I worry that it'll die on the vine if it doesn't get a little bit silly, but that goes against the simulatory approach it wants to take - and that I'd like to see it run with until it does find the fun. Evolve or die, I suppose. Right now, it makes for a briefly and not unattractive diverting proof of concept, but that key question - what do we actually want from a dinosaur simulator? - remains unanswered.

Saurian is available now in early access, via Steam.