Here you will find the curious case of the politician who broke his neck then went for a nice walk as if nothing had happened.

I'll be along early next week with full thoughts in our Dishonored: Death Of The Outsider review [official site], but seeing as it's out right now I want to bend your ear about the most interesting of its new sneak-o-magicky powers: the ability to temporarily assume of the appearance of almost any other character in the game. 'Semblance', as it's called, puts a little Hitman into Dishonored's whalepunk fantasy - only instead of borrowing someone's clothes, you take their face. It's a new tool in the series' stealth armoury, but more importantly it's another gonzo way of solving problems.

Semblance works like this: you sneak up on someone, and rather than killing or choking them, activate the power, which does something horrific involving converting their face into some kind of magical tar, and then your entire appearance into theirs. You can maintain the disguise indefinitely so long as you stand still and don't do anything threatening or unusual, but start moving and your magical Energy drains as rapidly as Friday night's first beer. Once your energy hits nada, you revert to your usual appearance - and woe betide you if that happens while anyone else is watching.

Basically, you've got about ten seconds of movement before the jig's up, and on top of that you can only steal each face once, so no returning to your snoozing victim and pulling another catfish - you'll need to find someone else. So, Semblance is a fundamentally different prospect to Hitman's clothes theft despite the similarities - each time you pull an Arya Stark, think of it as a single shot at getting into or out of somewhere.

I suspect I'm going to uncover a ton of alternatives ways to use the power as I play on, but for now the below scenario has been the clear highlight. 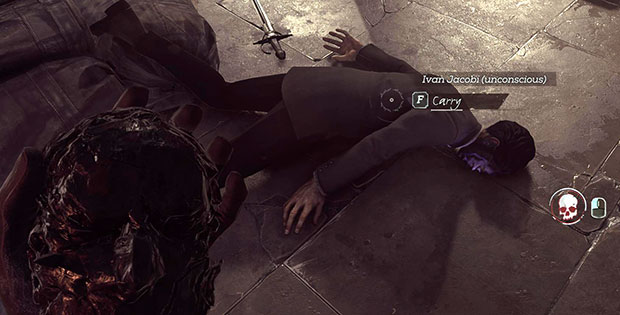 What I'm trying to do is rummage through a politician's office in order to find information on whether or not he's part of a creepy death cult that's been putting the frighteners on everyone in town, but inevitably the guy has the only key. And unfortunately for me, he's spending his day practicing an upcoming (and creepy) speech on a stage in a town square, watched by a half dozen guards all the while. Getting him alone is impossible, and even if I identified a certain split second in which I could snag the key unobserved, getting back out again is a whole new headache.

Unless I take his face too. I call this one The Prestige. (If you've seen the film/read the book, you'll know why; if you haven't I'm not telling):

1) SURPRISE TRAP DOOR ATTACK! (Also, as this isn't obvious from the video, I had to run underneath him as he fell to make sure he landed on soft-ish sacks rather than a hard stone floor - that way he's unconscious rather than dead. You can't steal the face of a dead person in Death of the Outsider, because reasons).
2) he's unconscious before I ever reach him, so no key theft risks here
3) As far as the onlookers are concerned, their boss took a comic-but-deadly tumble into a gloomy basement, then just strolled right on out of there like nothing had ever happened. They say politicians will never admit to a mistake, and this takes that to a chucklesome extreme.

1) tragically, the game's dialogue is not reactive enough to the situation. I'd have loved an "er, you OK boss? Boss?" line or two in here. But so it goes.

I'm a few hours into Death Of The Outsider, and so far I'm digging it more than I did Dishonored 2 itself - as well as the use and abuse of body-snatching, it's got a more interesting amoral and murky tone, a more nuanced protagonist and the missions to date feel a little bit more like playgrounds, where D2's sometimes could feel like work. Also I really dislike The Outsider as a character, so I'm praying the game makes good on its title.

But we'll see how it all shakes out later, which I'll tell you all about that early next week.