The combat in OS2 wasn’t my favourite part, because as you probably know I lean towards story and elf-bothering, but it’s good, and was highly praised. Making a standalone game about it seems like a good move. There’s a bit more to it than that, but that’s the main cut, thrust, stab, explosion, knockback, poison-applied of it. Fallen Heroes is set post OS2, but there is still adventuring to be done and a world to save. You become the captain of the flying battleship Lady Vengeance, and from there send a squad of four (three basic types e.g. archer or healer, and one familiar heroic face from OS2), out on various missions for complex turn-based murder. 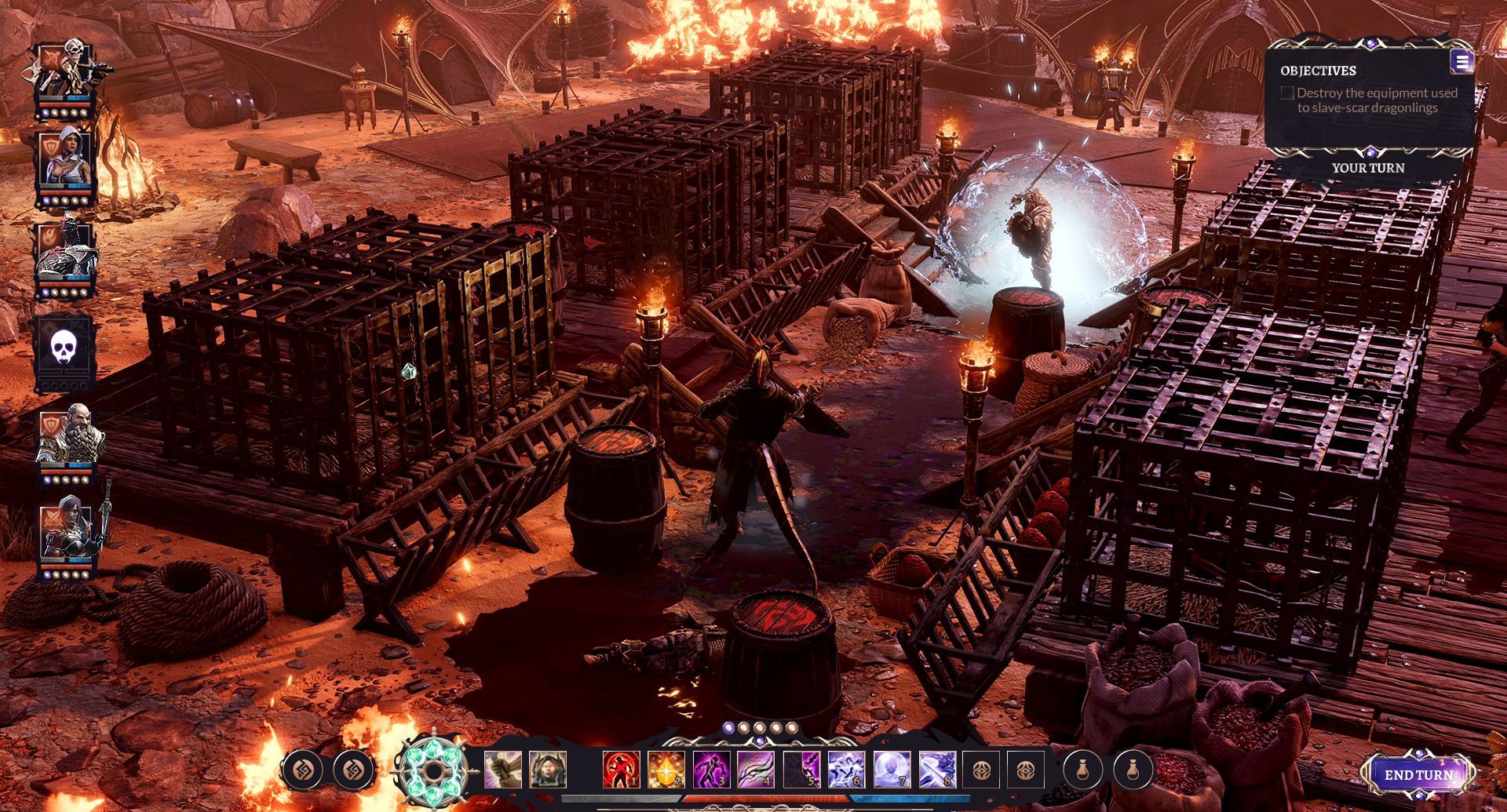 I played two missions, the first at a city dock where civilians were being attacked and the second at good skull boi Fane’s weird old man cottage. He had like three barns, and was apparently doing a lot of work on the place because there was scaffolding everywhere. I suspect he was planning to flip it and sell it to a smug couple on Location, Location, Location, pricing locals out of the market.

There have been some small revisions to the combat system. The initiative order has changed, so this time you get to take actions with all of your troops, and then the enemy take their turns. It makes battles easier to parse, without really lessening the complex game of magic chess you have to play in your head. “If I move my archer there I’ll be in a good position to shoot yer man, but then this skeleton will get an opportunity and it’s possible that my healer will be flanked in the next turn…” and so on.

You also don’t have an inventory in the same way, so no hoarding potions or scrolls. Instead, for each mission you pick two or three powerful but single use artefacts to deploy if you sense the time is right, like an instant teleport or a mega-heal. My favourite was a bell that turns a targeted enemy into a cow. Tee hee. Another fun but tactical addition is sulfurium, a surface type that joins the normal reactive surfaces like water, poison, fire and so on. Sulfurium can react… explosively, and I was told that, if mastered, you use it to do what is basically a rocket jump. 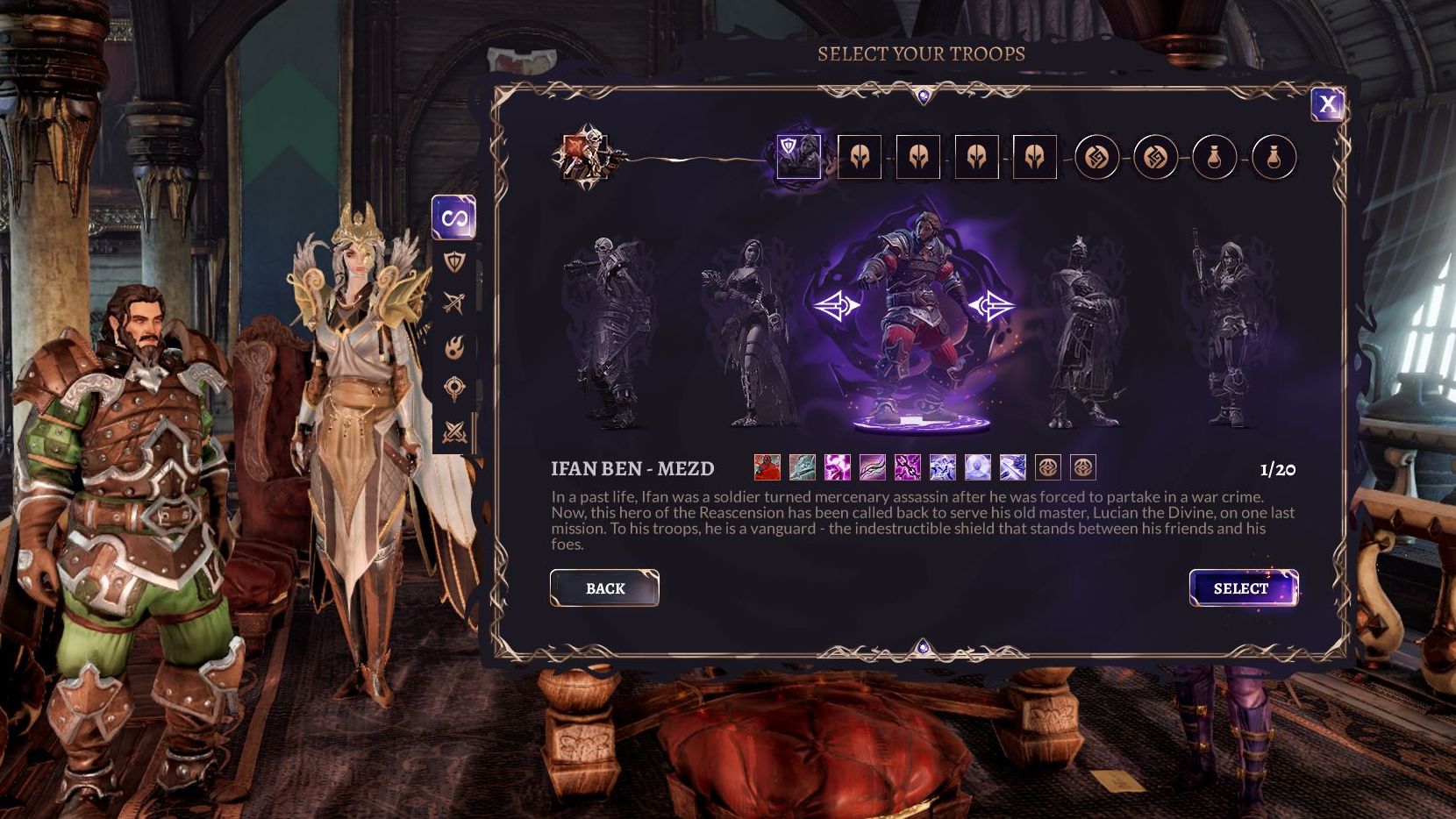 Missions have a few optional and mandatory tasks. Urgency was introduced by a ‘more enemies in x turns’ timer. At Fane’s house we couldn’t leave before he’d packed, so I had to run him all over the map to different circled objective points to ‘find’ research and chemicals and so on. At the docks, we had to save groups of threatened locals by running up to them inside circled objective points. Hopefully the full game will give you stuff to do that doesn’t revolve around circles as much.

In between missions you return to your war room at the Lady Vengeance, and discuss what to do next. It’s here that the RPG elements of choice and consequence are put back in. Before my first mission, Lohse was urging me to protect the townsfolk and Ifan was like nah, back up the troops. I chose the former. Had I chosen the latter I would have gotten some cool veteran troops to choose for future missions, but Lohse would have her arse in her hand for not defending the weak. Because I chose the former, Lohse’s hand remained arseless, Ifan acknowledged I did the right thing, and I got a new artefact… but no veteran troops. 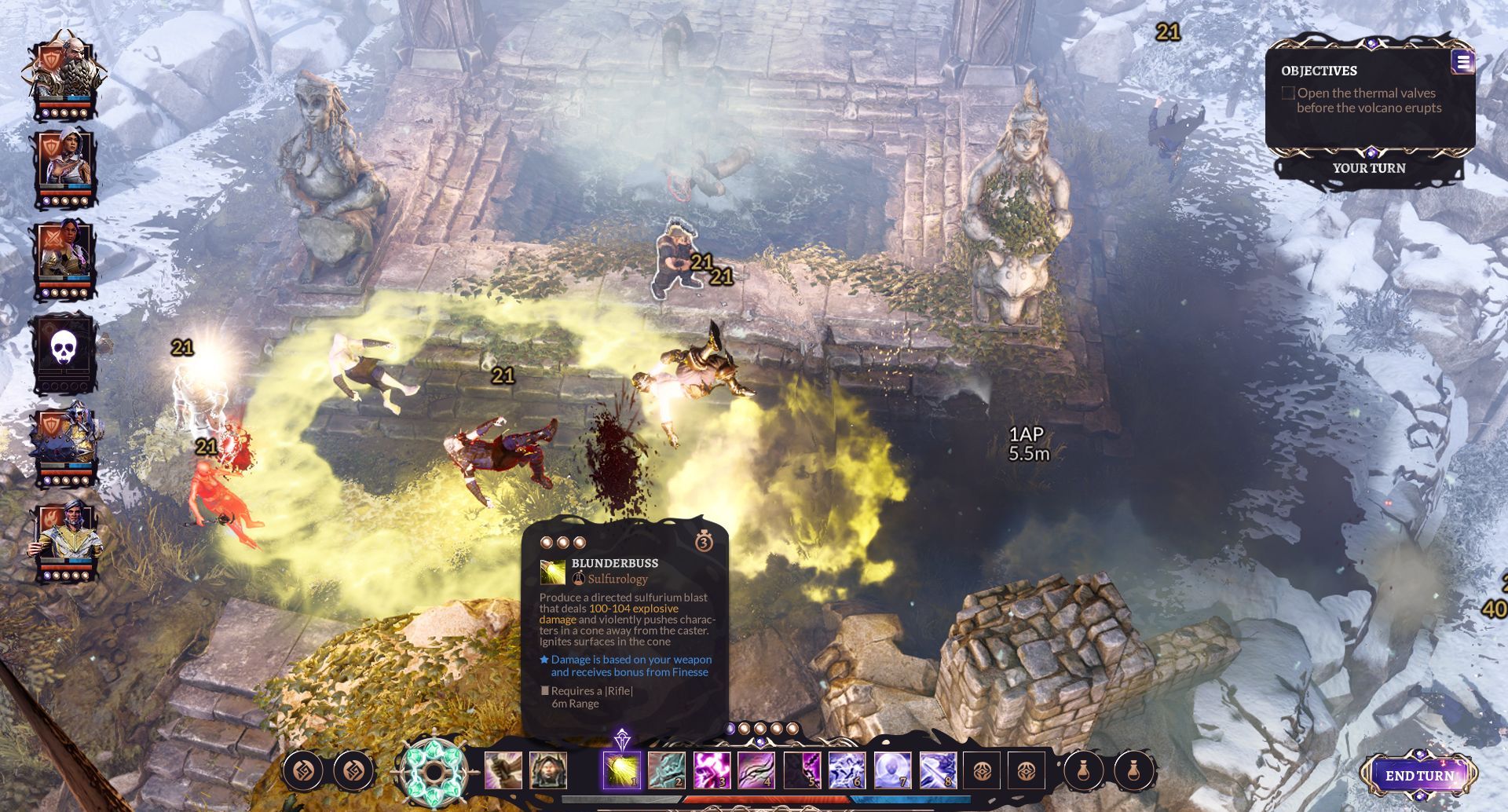 The press bumph released today says that you have to actually manage your crew ‘through diplomacy’ and that if you make poor choices and ‘lose hope’ then heroes might up sticks and jump ship. OS2 Fane, Ifan, Lohse, Sebille, Red Emperor and Beast, as well as the mysterious and extremely cool Malady, all feature, but may conceivably not feature for too long if they think you’re a terrible captain.

Fallen Heroes is being developed out of house by Danish studio Logic Artists (the devs behind Expeditions: Conquistador), and though the early alpha I played was an hour of good clean you-only-have-2-action-points-left fun, there’s a lot promised that I didn’t see hide nor hair of. Guns are supposed to feature, for example -- Fane was supposed to have them, but the build didn’t -- and could potentially change the flow of battle a lot. Or not at all. I don’t know. Fane just spent a lot of time kicking enemies instead. I didn’t see any ‘devastating source powers’ for the Lady Vengeance, or ‘technology to research’. I didn’t see any new or breathtaking unit types.

But y’know what? The OS2 combat is really clever, isn’t it? So, to put it another way: did you like the combat from Divinity: Original Sin 2? Keep an eye on the progress of Fallen Heroes. It's currently supposed to be out later this year, so they'd better find them guns quickly.