2017 has been a stunning year. Partially in the ears-ringing, shellshocked way, partly in the ‘Wow, I’m making a living writing about games’ style, and consistently in the ‘Nobody has time for even half these amazing games’ sense. Of the scant handful of games I did manage to see through to the end, here are my picks from 2017, although if I had time and column inches to spare, I could sing the praises of another dozen more.

Path Of Exile: Fall of Oriath

I knew Grinding Gear Games had been busy working on something big for their ambitious F2P action RPG, but I never expected it would turn out to be one of my favourite expansions of all time, more than doubling the length of game’s story, and elevating POE to its current status as a legitimate rival to Diablo. The little New Zealand studio had long teased plans to expand the game from its roots as a traditional 3-act ARPG into something bigger, but things seemed to taper off after the release of Act 4.

The simultaneous announcement of Acts 5 through 10 was mindblowing in of itself. The quality of the content delivered, even moreso. While acts 6-10 technically retread old ground, there is enough new story there, punctuated with new locations, bosses and gameplay mechanics to make it feel surprisingly fresh. There's a great sense of escalation to it all, as well, with the story taking on a God Of War-esque air as you begin a massive campaign of deicide, averting the apocalypse by murdering nearly every god in the world.

And then Grinding Gear went and capped the year off with one more expansion, expanding the (already impressively large) endgame to match the scope of the main story. Despite her lack of gaming experience, my girlfriend has taken to Path Of Exile like a duck to water as well, and we hope to play a good chunk more if it over the holidays. The couple that slays together, stays together and all that.

Roguelike grognards could be forgiven for overlooking Unexplored at first glance. The simple, sharp animated graphics and the physics-driven realtime combat engine are a world away from the ASCII purity of Nethack. On the surface, it's the furthest thing from a 'true' roguelike, but give it more than the briefest of looks, and you'll notice that Ludumotion's clever little dungeon crawler is structured very similarly to Brogue, a particularly brilliant back-to-basics attempt to strip back the genre to its most compelling fundamentals, cutting back as much statistical bloat as possible.

Without experience points or levels to complicate things, Unexplored's appeal lies in its dungeon design. Its procedural generation systems are a borderline-magical piece of code that allows it to generate dungeons that feel like they've got a dungeon master's creative hand behind them, full of sidequest arcs that span multiple floors, puzzles with solutions scrawled on hidden notes, secret areas that feel genuinely satisfying to uncover, and an almost immersive sim-esque slant to problem solving, giving you a flexible, ever-expanding palette of tools and interactions over the course of a given adventure, and a wide variety of situations to flex them in.

A trio of free DLC packs are just the icing on the cake, each one repurposing the dungeon generator in exciting new ways. One campaign variant is Tolkien-themed, giving you a less magical, more nerve-wracking descent through NotMoria. The second pack reworks the game into a fantasy parody of Aliens, with scoring based on how many acid-blooded bugs you end up clearing out, and the third piece (still in development) is an eldritch mystery, with you tracking down clues on which cultist you need to kill with which weapon in order to prevent an apocalypse - it's like reverse Lovecraftian Cluedo. 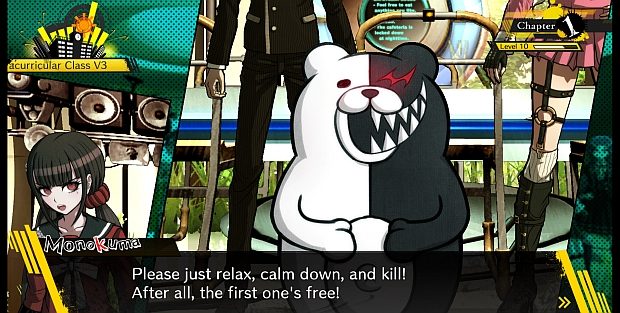 Well, I say V3, but I really mean the entire Danganronpa series, even stretching a bit outside of the realm of gaming. Having played through the first entry in this bizarro visual novel/murder-mystery series some years ago, I decided to catch up so that I might fully enjoy the latest entry. The entire process took the better part of three weeks and a few sleepless nights, during which I played through Danganronpa 2: Goodbye Despair, the shooter-lite spinoff Ultra Despair Girls, capped off with the Danganronpa 3 anime series (which I was surprised to discover is a vital part of series canon), all capped off with a leisurely stroll through V3: Killing Harmony.

It was absolutely worth the time and effort. Danganronpa 2 builds on the strange world established in the first game, presenting another series of mysteries that, despite not adhering to anything close to real-world constraints, are surprisingly consistent in their reasoning, allowing would-be sleuths to intuit their way to the solution after a few obligatory mid-trial twists. Ultra Despair Girls, while admittedly quite weak as a shooter, is a truly unique experience. It's a lurid doe-eyed Trojan Horse; Were it not for the day-glo anime aesthetics, pink blood and minor NPCs being portrayed as silhouettes, it would be unbearably dark subject material, especially once it starts delving into the traumas that define the primary-school-age antagonists.

The end of the original story arc is hidden away in an anime series, easily found and watched on Crunchyroll. Danganronpa 3 (not to be confused with the latest game) is both a prequel to the first game, but also a direct sequel/extended epilogue to DR2 and Ultra Despair Girls. It even uses the visual and musical language of the games to great effect, despite telling a story with a very different pace and scale. Danagnronpa V3, the most recent in the series, feels like an encore for the fans; A 30-hour long. self-contained victory lap built out of familiar elements, remixed. Rules are broken, twists redirected, and it all goes out with a bombastic final act that I can't quite see the series ever topping, or even trying to.

So, that's the highlights of my 2017 in gaming. Next year, I plan on buying a Switch and a Vive headset, too, opening up even more doorways into strange new virtual worlds. My wallet is already weeping in anticipation of its terrible fate.