Join Ella McConnell for Waifu Material, a monthly column in which she navigates the murky, cherry-blossom-strewn waters of visual novels, dating sims, and everything in between (reader masochism not required but strongly recommended).

For better or worse (NAMING NO NAMES), vampire romance is a prolific subgenre in pretty much every contemporary medium – and visual novels are no exception. As such, when Red Embrace popped up in my Steam recommendations I decided to embrace the inevitable.

Developed by Argent Games, an up-and-coming Western visual novel team whose previous title Chess of Blades made it into Rock Paper Shotgun’s Unknown Pleasures roundup in January, Red Embrace is also part of the boys’ love – or yaoi – subgenre. Historically, yaoi fans (as well as fans of its female-focused counterpart yuri) have often found themselves under fire in popular culture, but will Red Embrace make a fujoshi out of me?

Time to get our trailer on:

It also credits all the people involved in the making of the game despite its short length, so that’s nice.

Red Embrace’s protagonist is a hip young guy working the graveyard shift as a seedy San Francisco diner – the perfect place to have a chance encounter with a conspicuously attractive member of the undead.

You subsequently get drawn into a world of vampiric intrigue, but will you manage to escape with both your husbando and your life? 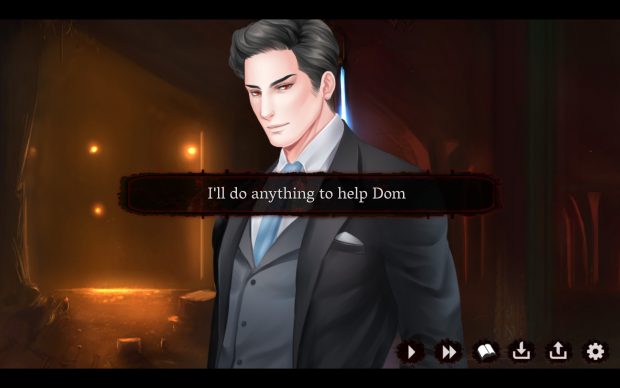 Red Embrace has three eligible bachelors to offer you: 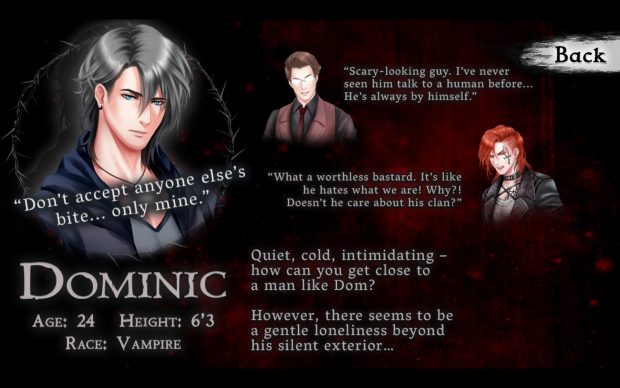 I was wondering whether the ages listed in these profiles were their actual age or just the age they appear, but considering Dominic says he’s been a vampire for 10 years – which would have made him 14 at the time of turning – I think we can safely assume it’s the latter 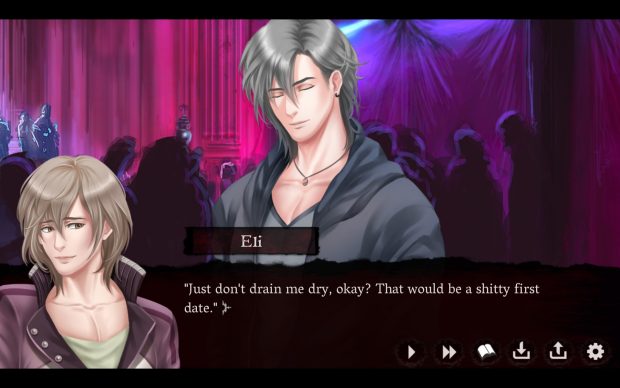 Or a GREAT first date 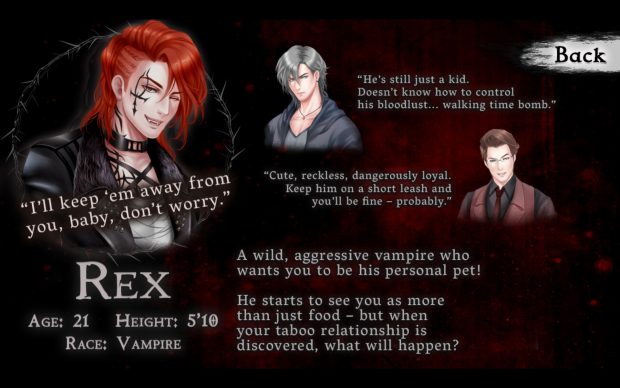 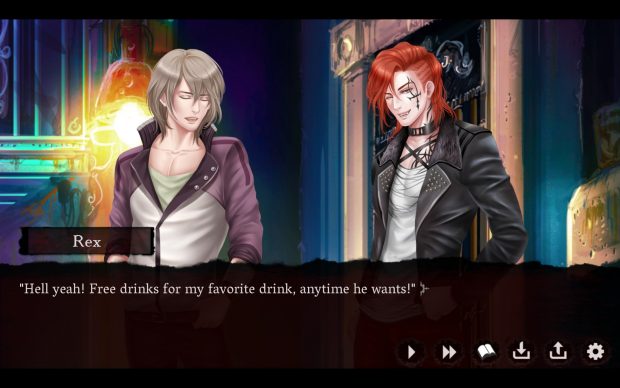 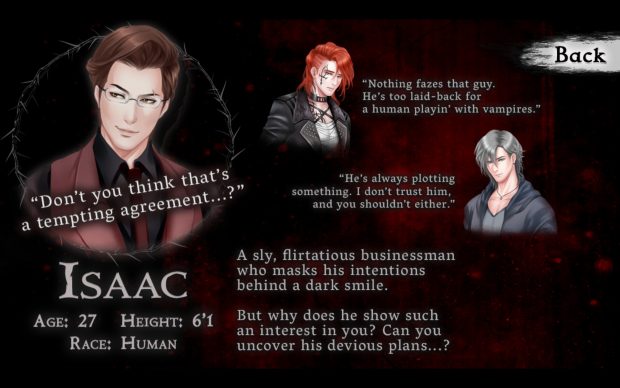 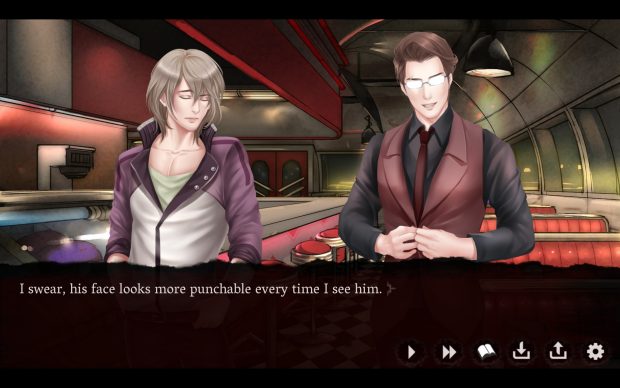 An excellent quality to look for in a partner

It’s not unusual for visual novel projects to use multiple artists. In fact, it’s pretty common to have at least two: one to do the in-game character sprites and another to illustrate the CGs. This can result in a noticeable style disparity between the two, and it doesn’t always work.

Red Embrace’s kind of does for the most part, but for some of the characters their soft, slightly more Western-style sprites are sufficiently different from their CG selves to be jarring. 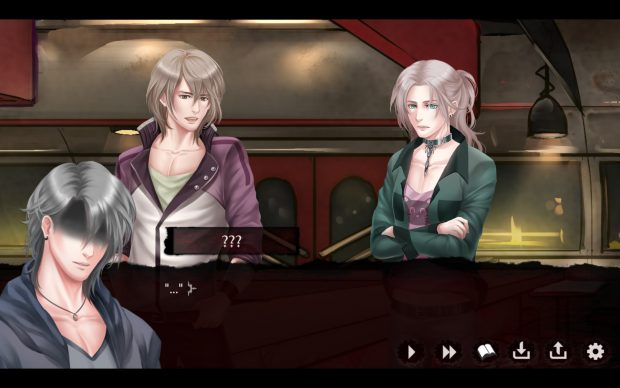 However, overall Red Embrace’s CG selection is pretty good (aside from some of them looking a little stretched/grainy when viewed on a large resolution), with slight alterations of these used in sequence to create character with simple, flipbook-style animations (most often used in the kiss and/or bite scenes). 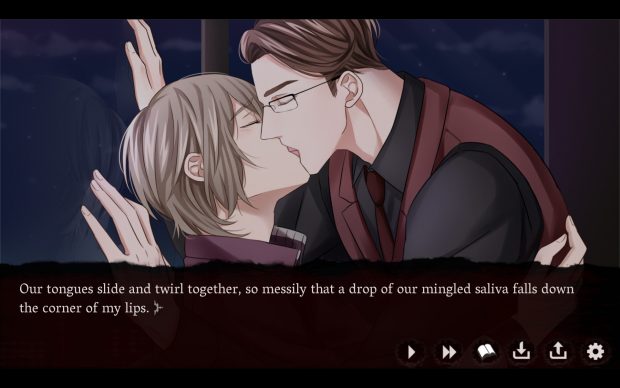 Sprites and CGs aside, Red Embrace makes good use of a few bells and whistles to bring the game to life visually, with the occasional panning shots of its for the most part lovely dark and almost Impressionisty backgrounds a nice, atmospheric touch.

There’s also a few instances of blood spatters and slashes ripping across the screen when characters come to blows, and while this is kind of cool it’s a bit much when the screen is sometimes completely flooded with a strangely eyebleeding red that doesn’t seem to really match the rest of the game’s palette at all. 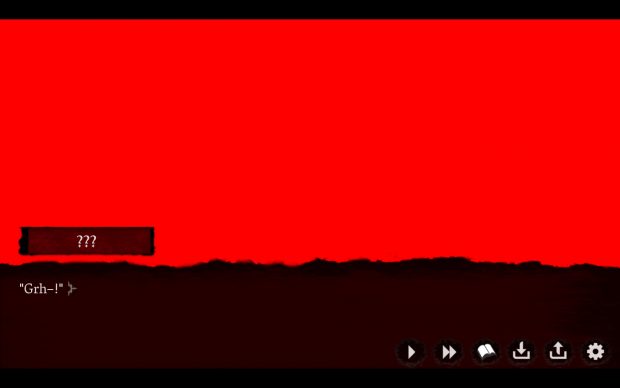 That’s the sound of my retinas melting

The game’s menu is simple but nicely themed, and although it’s a nice change to not see a menu with tiny text Red Embrace’s is HUGE, sometimes making it feel like its design was outsourced to Fisher-Price as you scroll down to get to a few more giant gothic buttons. 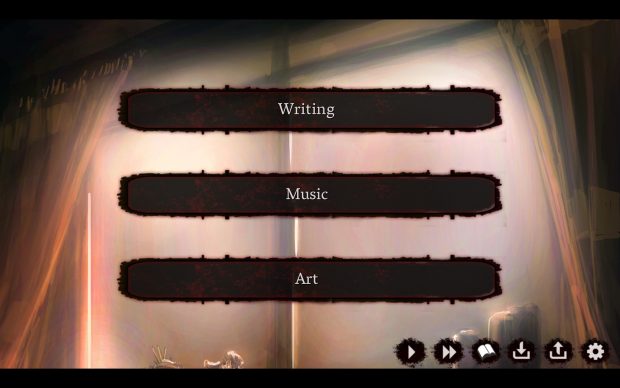 There’s no voice acting in Red Embrace, but you know what there is? AWESOME MUSIC.

The majority of the game’s music captures the game’s dark, dangerous and seductive atmosphere really well – except for that one weirdly porny track that sometimes plays in the diner (but maybe that’s just me). 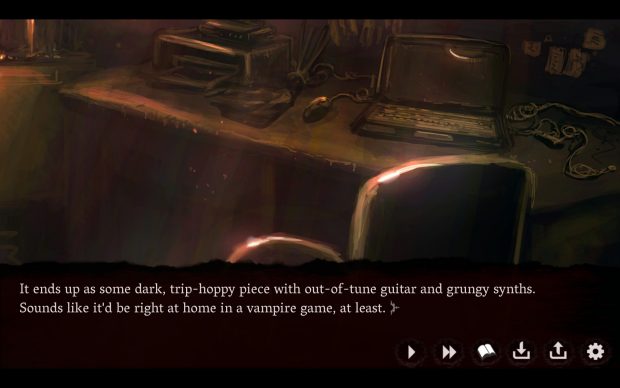 I see what you did there

In short: no complaints here.

Speak no evil: writing and plot

Red Embrace’s writing is decent but not amazing. 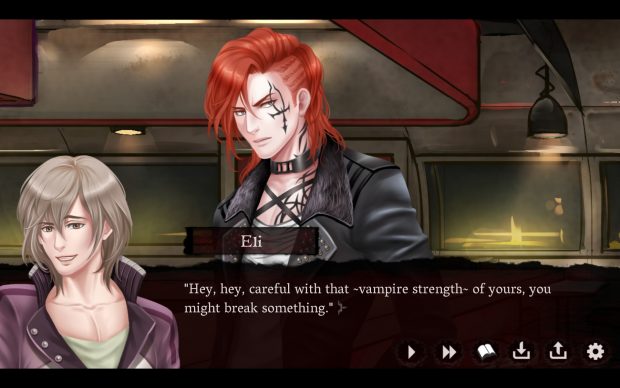 There’s also quite a lot of ~tildes~, usually from Rex (which might be why he seems so disgruntled when they’re turned against him)

That said, I was sufficiently invested to want to see out all the characters’ stories to the (often bittersweet) end, and there were a good handful of moments where my cold, dead heart experienced flickers of emotion along the way. 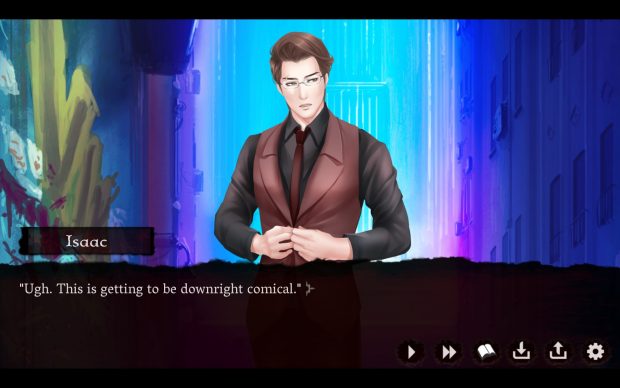 One of Red Embrace’s USPs is its personality system. The choices you make change the protagonist’s personality, making him more charming, blunt, aggressive, or gentle and giving him different dialogue options as well as contributing towards which ending you get.

Although it ultimately boils down to the hidden points method used by most visual novels to determine which character you end up with (and only changes a few sentences at certain points in the game excluding the endings as far as I can tell), it’s definitely a slightly more interesting way of doing it. 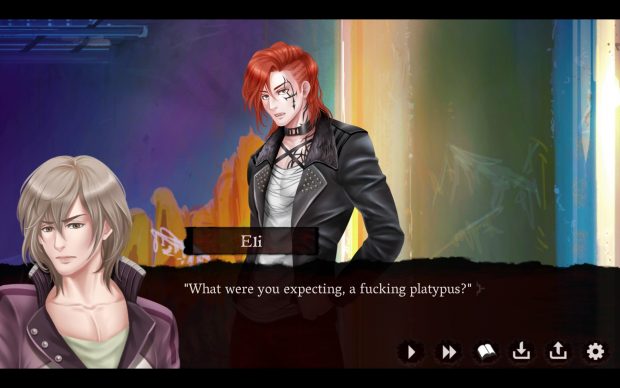 The endings sometimes feel a little abrupt (especially as you’re dumped straight back to the main menu without even a credits sequence to bookend the experience), and despite having played through all the routes I do feel like there are a few unanswered questions – but maybe that’s a good thing.

Also one thing that kept bothering me: the protagonist calls other characters who are ostensibly a similar age to him (like Rex and Luka) “kid” with surprising regularity – is he a grizzled Depression-era detective trapped in the body of an anaemic twink?

Red Embrace is short a game, but that’s fine – what you get is definitely worth its modest £3.99 price tag.

However, despite the in-game “personality tutorial” screen, using guides, and disregarding a known bug that sometimes prevents you from getting the achievement for full completion, I was unable to get those final few percent of “game text seen”. I don’t feel like it would have added much to my experience of the story considering I must have missed a sentence or two of dialogue at most, but it was annoying. 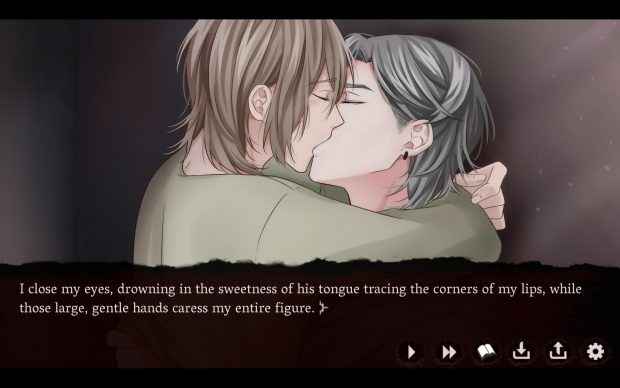 One more thing, specifically a question to the Red Embrace devs considering some of the themes, language, and terminology used (especially the name of that elusive final achievement): you’ve played White Wolf games, haven’t you? 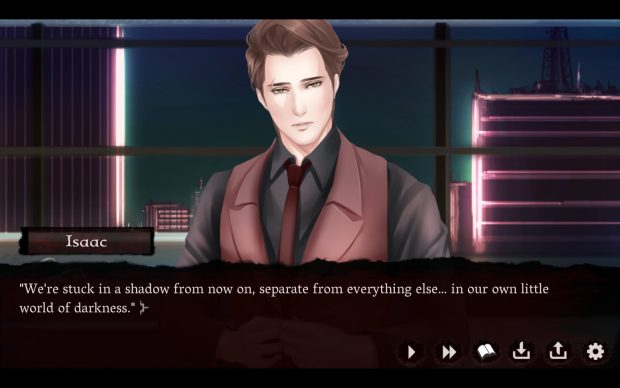 Who’s your husbando though?

Rex, probably – he has the most noticeable character arc and, more importantly, his hair is full of secrets. 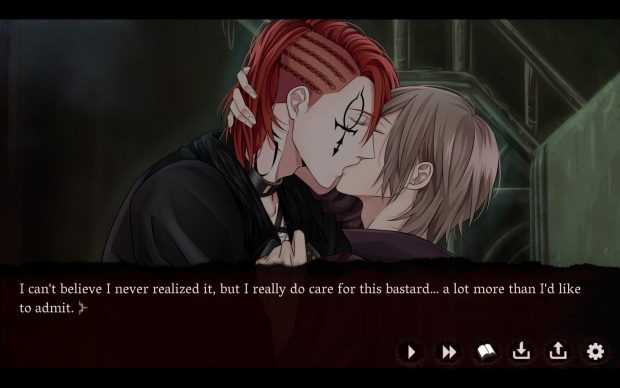 Despite my (relatively minor) gripes, Red Embrace is actually a pretty enjoyable little game that doesn’t take itself too seriously and delivers a well-proportioned slice of blood-sucking boy love.

If that sort of thing’s your jam, I’d definitely recommend picking it up. 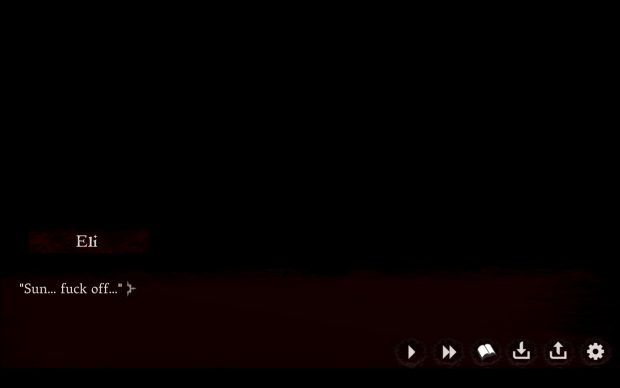 The point at which my immersion was complete