Update: This article has been updated on 22/08/17 in light of the release of the Season 3 update, and to include new instructions on how to install the translation patch for it.

Ah, Dragon’s Dogma [official site], gem of Capcom’s slightly weird early 201X lineup. The familiar alliteration in the title wasn’t coincidence; Dragon’s Dogma was Capcom’s take on classic D&D, circa 1990. A fully player-designed party, a threadbare plot, a semi-open world full of dungeons, loot, levelling and a few dragons, too, and all tied together with a physics’y, tactile action combat engine fresh out of the Capcom forges, allowing for the kind of dramatic combat that would drive a DM to despair as they consult the arcane rules behind grappling.

In 2015 Dragon’s Dogma Online took the series online in a sequel of sorts, but as the third season of that game approaches, there's still no sign of an English language release. Fear not though because with a little bit of tinkering, you can jump in right now, and there's a fan translation in progress that you can enjoy the early parts of already. Here's how to play and why you should.

Despite (or thanks to) its oddities, the original game sold acceptably enough, built up a decent cult following, and has recently seen a slew of re-releases including ports to the current crop of consoles due later this year. So when this free-to-play pseudo-sequel was announced, the feeling was that it'd surely come west not long after its August 2015 release. A game so aggressively Tolkien-esque in its stylings would have to be Westward bound, right? The game even has The Tarrasque - the OG party-crusher and DM’s last resort - as an optional endgame boss!

Two years later there's no english language release in sight. Capcom’s response to questions about the game has been limited to silence, evasive statements, thrown smoke-bombs and daring 10th storey window escapes. A crying shame, given that it’s a really rather lovely game, and a far more direct successor to the original than many expected..

Fortunately for us all, a dedicated crew of english-speaking fans have managed to come up with a relatively pain-free way for the rest of us to access the game, along with a partial translation patch, which localizes almost all the core UI elements, item/monster names and quest objectives. In short, everything required for basic gameplay, assuming you’re halfway familiar with the original game. Sadly, only the very beginning of the story is translated at present, but you’re probably not going to care too much about narrative motivations when you’re clinging to a raging Sphinx’s wing as it dive-bombs the rest of your party.

Assuming you’re coming fresh off the original game, Dragon’s Dogma Online is a lot more of the same. The world is enormous compared to the original, and full of interesting nooks and crannies to explore and loot, with every abandoned well containing something of interest at the bottom. While story quests will help propel your first run through each area, the real meat of the game is in exploring this huge non-linear world, either with friends or a party of AI controlled Pawns, either self-made, or hired from other players. It’s not really an MMO - you see other players in the central city of the game, but the world itself is fully instanced for you and your party of 1-4 humans or pawns. 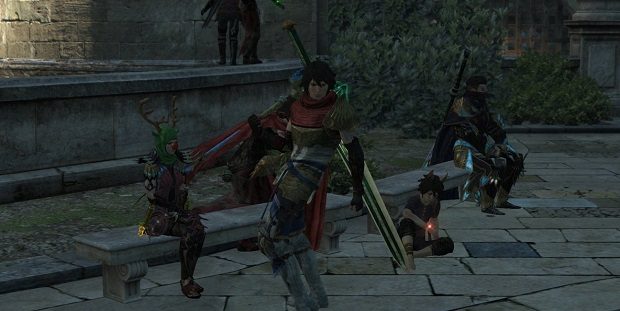 As with the original, the real stars of the show in DDO are the massive boss-class monsters. There are almost 60 different types to find and murder this time, and multiple variants of each to be discovered. While the finer mechanics of fighting them have slightly changed from the original (once a monster has become enraged, its stamina must be drained before its health can be reliably damaged), it’s still that familiar mix of traditional CRPG silliness and Shadow Of The Colossus-inspired clambering around on top of angry, flailing beasts in search of weak-points to stab.

Nice as this all sounds, it’s not entirely sunshine and +3 Lollipops Of Joy - some concessions have been made to the F2P online framework, including a range of perks that subscribing players (i.e. Not Us) have access to. The engine itself also feels a little rougher and possibly less friendly for low-end systems than the original, and some visual effects (such as spreading flames and charred monster-meat) aren’t nearly so detailed here. But for the most part, this is more Dragon’s Dogma writ large, and designed to be replayed, as switching classes (freely done) and retreading old areas will gradually unlock higher-level challenges in that zone. All told, it’s well worth a look if you came away from the original wanting more.

If all of this has piqued your interest, your party members have a bit of work to do before venturing forth. You’re looking at a bit of monkeying around with (free, public, far easier than it sounds) VPNs, 17gb of download and trusting in the good-will and enthusiasm of the english-speaking DDO community, which you can find mostly centered around this Subreddit, the Wyrm Hunt clan Discord server, and the White Dragon Temple wiki, which provides a lot of useful data that would be difficult to look up in Japanese..

Regarding downloads, you’ll be wanting to grab three things:

Then the patch to the latest build of the game (700mb), if you don’t feel like downloading a chunk of new game data via an achingly slow free VPN.

While you’re waiting for all that to download, you’ll probably want to be registering the game on Capcom Japan’s site. Follow this handy little guide and that should only take about five minutes. It’s easier than you might expect. That page also contains the information you’ll need to get your VPN up and running, but it’s literally just a matter of picking a server listed as Japanese from a list.

Once done, just unzip the game, then the patch, then the translation files all to the same directory and overwriting as prompted. Assuming everything went well, your DDO directory should weigh in at 33.5gb. Log into your Japanese SoftEther VPN server of choice, fire up ddon_launcher.exe, and fill in your Username & Password boxes! Assuming everything goes to plan, you’ll be met with a loading bar in the launcher. It’ll take a few minutes verifying that your game is in working order, and then you're presented with a shiny green launch button. From here on, things should be simpler, intuitive, and mostly in English.

As an optional step, you can add a quick and easy IP mask which allows you to drop your VPN connection once you’re properly logged into the game (ideally once you’re in-game and walking around), reducing lag greatly if you’re planning on playing with other people, and allowing you to resume normal internet usage while the game is minimized or windowed. I’ve found it to be very forgiving of idling AFK. It’s a one-off tweak, so well worth the extra five minutes of effort. Go forth and stab a few goblins for me, would you?

Update: On Thursday night (August 17th) the long-awaited Season 3 for the game rolled out, adding new content and features to all layers of the game. This, of course broke the current translation patch. It only took 24 hours for the community to get back in business however. You can get the update to the new version (12gb download, unpack over existing DDO directory) here or here, and get the release-candidate translation patch (it may have some bugs yet) here.

One final note: The game servers are taken down for a few hours of weekly maintenance every Thursday night, GMT-wise, from about midnight til 2-3am, so if you find yourself unable to log in around that time, that’s probably why.