Last Time on the BoC: After a catastrophic goblin attack slaughtered the entire military (except Id), as well as their bloodthirsty mayor/captain, the Basement began a frantic programme of fortifications. Former mayor Urist, transformed by grief, was re-elected, and pledged to put aside her differences with Lorbam the Founder in order to make the Basement Of Curiosity the finest zoo in the land.

As the last few feet of the fort’s defensive moat are dug out, an elven trade caravan comes prancing out of the eastern jungle. Rubbing her hands in glee, Lorbam scampers to the trade depot, with Urist’s blessing to spend every penny of the Basement’s wealth on exotic beasts.

While checking out what the fortress had for sale, I found chief craftsdwarf Imush has been cranking out hundreds of stone figurines of an entity called ‘Tombsdust the Narrow Hag’, which is apparently some sort of sorceress, hated by the dwarves’ entire civilisation, which went on a rampage a few decades previously. I love that, in no small part, the Basement’s economy is propped up by exporting action figures of a witch, made by a bloke who's obsessed with bins.

It turns out Lorbam is in luck: the elves have brought along a deer, a groundhog, a cougar, a cheetah, a snapping turtle and a mink (they also have a grackle, which I think at first is some sort of cool fantasy animal, but turns out to be a very dull bird). She buys the lot, and has them sent down below, where the zoo is already being expanded by the fort’s enthusiastic cadre of miners.

What’s new at the zoo?

The dwarves spend the rest of the spring sprucing up the zoo complex beneath the tavern known as the Great Harvester, in order to make it worthy of Lorbam’s ambitions. Here’s how it looks at the start of the summer (click to enlarge): 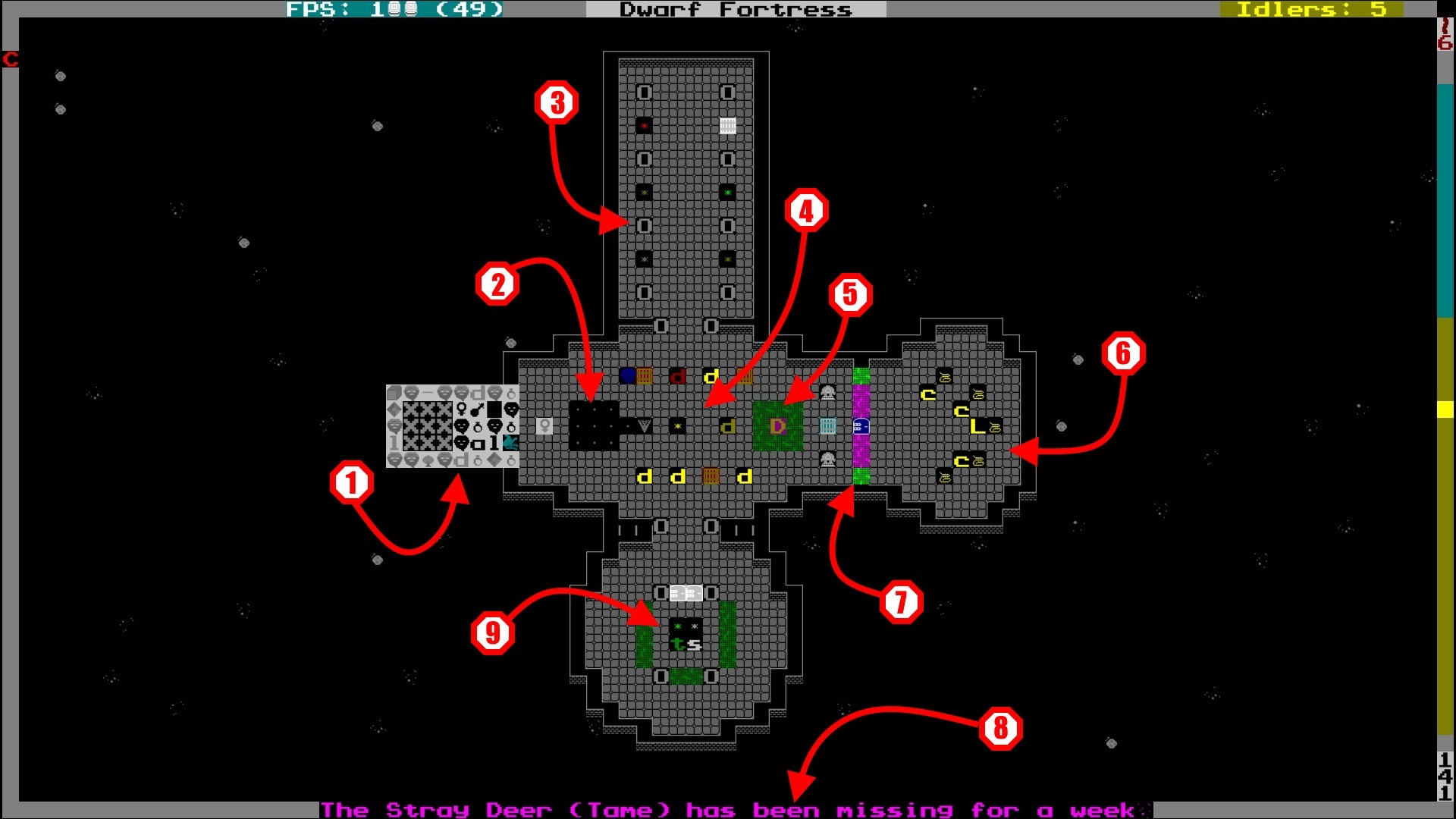 1. The entrance stairway down from the Great Harvester, complete with loads of esoteric carvings.
2. The former cheetah pit, which I’m now hoping to turn into some sort of gladiatorial hole where Id can fight wildlife to pieces.
3. The aviary hall, housing sparrows, parakeets, a lorikeet, a wren and a grackle.
4. The Hall Of Hounds - as well as the basement’s original exhibit (a dog in a lead cage), this main hall also now houses two rows of cages stuffed with rapidly breeding dingos, which Lorbam is slowly learning to train. There’s also a cage full of the small primates known as lion tamarins (the central yellow asterisk) - for after all, what is a monkey but a small and agile dog? The Hall Of Hounds is overlooked by the tavern above, which has a big oval hole in its floor so the revellers can stare down at the seething dogs below
5. A donkey’s dessicated carcass, in a green glass cube.
6. The Big Cat Bonanza: a series of miserable cats on gold chains - at the centre is a lion, flanked by two cheetahs, and the new cougar. The dwarves need another cougar to complete the display.
7. A totally sick stained glass window made of loads of gemstones.
8. Whoops lol. That was the deer Lorbam bought, and which everyone forgot to feed.
9. The Reptile Lounge: inside a green glass dome are housed a snapping turtle, two anoles, a skink, and a big old bucket of rattlesnakes.

Summer arrives, and while the above ground is stifling in the rainforest heat, silent except for the hum of cicadas, the underground is alive with dwarven merriment. Bard after bard is arriving to perform at the Great Harvester, and the zoo below is full of delighted guests.

But there’s still some issues to deal with: after several years in the muggy turmoil of the jungle, many of the fort’s long term inhabitants have found their clothes literally rotting off their bodies, sloughing free in drifts of congealed dirt and sweat. As a dwarf of some class, Urist is alert to this situation, and orders a new lobe built in the fort’s manufactory complex, to house looms and tailor’s workshops. As well as the fibre from the weird underground plants known as pig tails, the Basement is awash in wool and leather from its various aboveground livestock, so there’s plenty to make clothes with

Urist is just mulling over the possibility of revamping the fort’s sleeping chambers, which are now feeling very outdated, when Id comes barreling in through the front gates, face grim as chicken that’s been out of the fridge for a week. The Kobold Fladasreelgus has been seen on the fringes of the rainforest again, and Id knows from bitter experience what always comes after a sighting of the strange, tongueless creature.

The mayor sounds the alarm to pull all the dwarves inside the fort’s walls and raise the drawbridge, and just in the nick of time: no sooner is the bridge raised, than two dozen goblin cavalry arrive, mounted on beakdogs and hungry for violence.

Id and Urist look at each other with haunted expressions. They’ve both lost spouses to the goblin horde, and they know all too well that if the defences constructed over the Winter don’t work, they will all be slaughtered. If there’s so much as a single gap in the wall, or a climbable tree too close to the moat, it’ll be curtains for everyone. Lorbam should probably be worried about this too, but instead she’s underground, shouting at a load of dogs.

The whole fort holds its breath as the goblins ride in, and sure enough, they gallop all around the circumference of the moat looking for a way in. But they find nothing, and so just mill around outside looking angry.

Urist has successfully goblin-proofed the fort. With farms underground, a great herd of beasts, and a huge stock of food and drink, they can hold out indefinitely against the invaders, without a single life lost. It’s the fort’s most bloodless victory to date, and it’s enough to win Urist re-election when the summer mayoral ballot goes around. 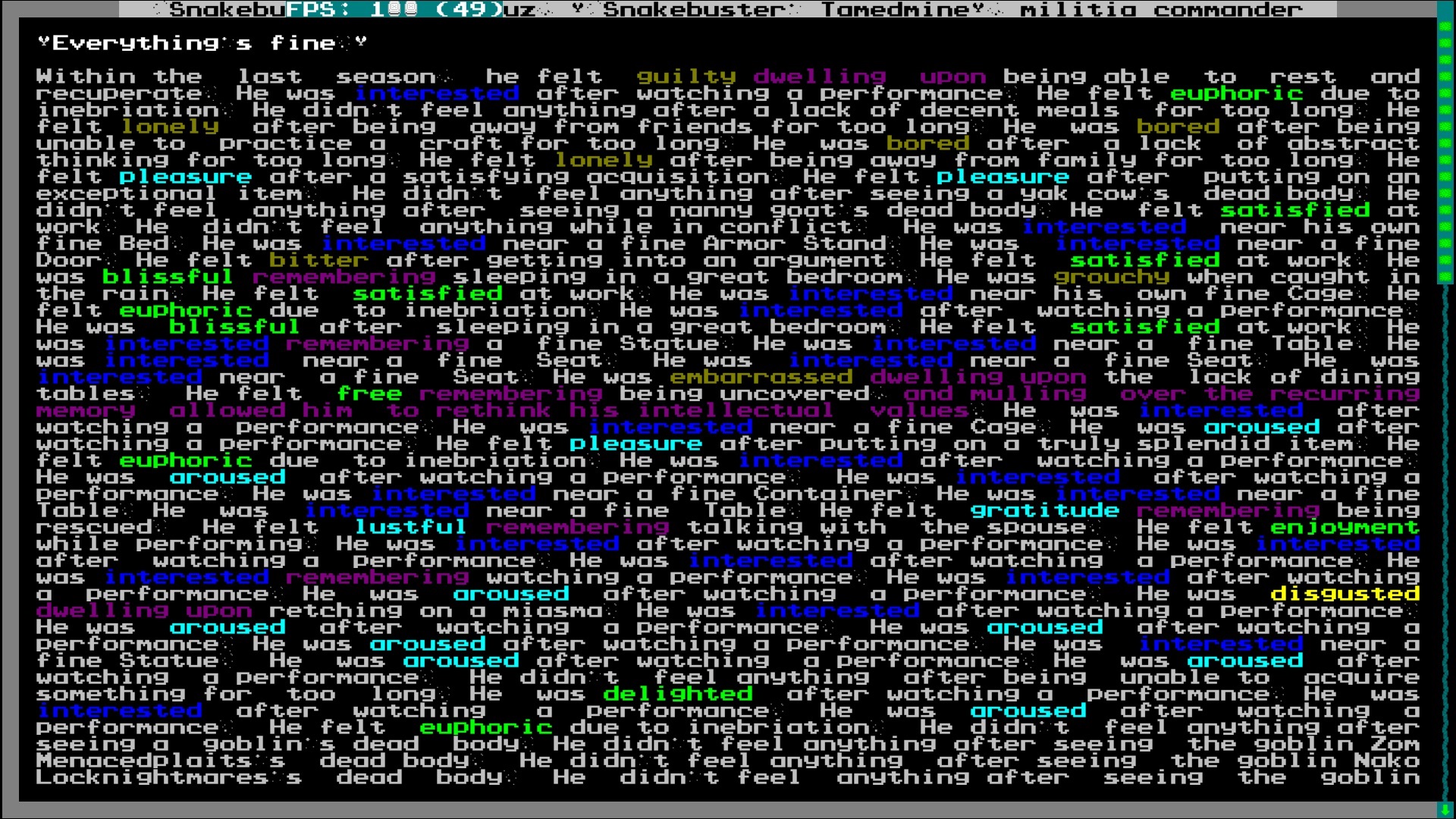 Although the fort is safe from the goblins outside, as the weeks of the siege drag on, the place takes on something of a pressure cooker atmosphere. With sixty odd dwarves stuck inside the walls in sweltering heat, forced to endure the taunts of the gribbly gits who killed their loved ones, it’s only a matter of time before someone snaps. 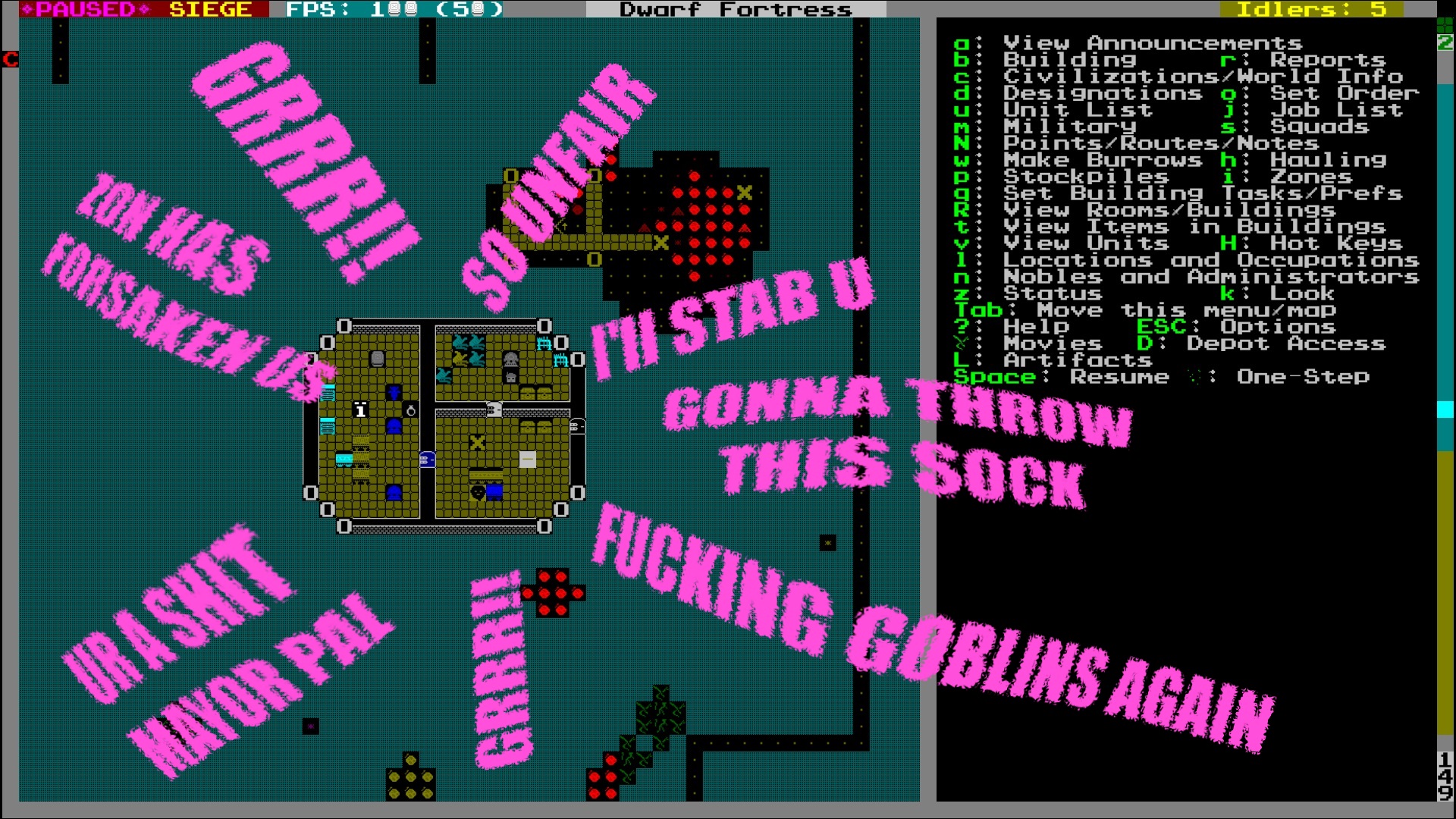 In the end it’s Udil - not Udil “two-crowns” the manager, but a farmer-turned-furnace-operator who was emotionally fragile even before their best friend was butchered during the last siege. They’re throwing a weapons-grade wobbly in the mayor’s quarters, weeping and chucking rags around while holding an extremely disconcerted baby.

But if things are getting tense inside, it’s even worse out in the jungle. It turns out the bards visiting the Great Harvester were just the trickle at the start of a flood, and now there are some eighteen visitors - humans, dwarves and elves - all waiting awkwardly around the edges of the map, wondering what the hell they’re walking into. Among their number are several soldiers, but also a dwarven noble - a lady of considerable rank - and even the spouse of the Dwarven king! 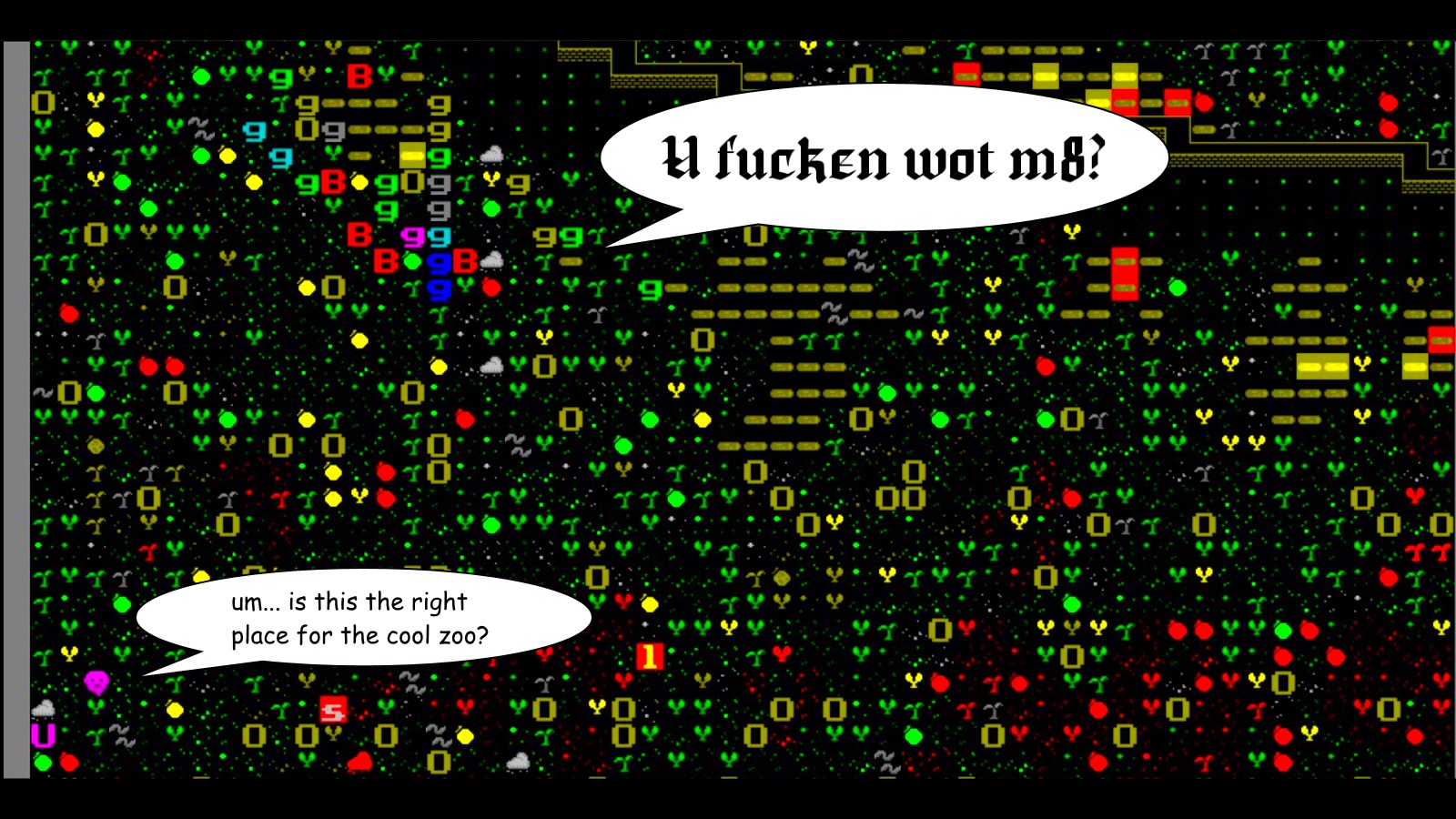 At first, it seems they are safe, as the goblins seem fixated on doing laps of the moat, occasionally kicking the shit out of a weasel or a snake out of frustration (one can only imagine Id’s frustration at seeing his job done so amateurishly). But eventually, inevitably, the goblins realise there are fresh targets to take out their anger on, and the murder begins.

The lady and the king’s consort go down like sacks of shit, followed by a trio of bards, and then a speardwarf called Mosus. This last casualty wins some respect in his final moments, however, as rather than fighting with, y’know, a spear, he elects to smack a goblin right in the chops with his prized possession - a 278 page book entitled “consider the world without the goblin”. Although viscerally racist, this is a power move that cannot be denied, and the dwarves within the fort’s walls salute Mosus as he is torn apart.

At last, however, as Autumn begins, the goblins decide there is little sport to be had this season, and bugger off home. A great cheer erupts from the throat of every dwarf (well, except for Udil, who has gone completely mad and is now stumbling round the aviary shouting threats at the birds), and the drawbridge is thrown down. The handful of survivors from outside rush in, and several casks of papaya wine are cracked open in celebration.

Even Lorbam, obsessed as she is with her zoo, has something to rejoice about. While the goblins’ mounts were mooching around outside, one of them managed to trigger one of her weasel traps, meaning Lorbam is now the proud owner of a caged, furious beakdog. It will make the perfect centerpiece for the Basement...

Next time on the BoC: In the search for more exotic beasts, the dwarves decide to dig deeper into the earth...