*Click*, went my gun. Not the good, Richard Beymer kind of click. The "you're out of ammo and definitely dead" kind of click. The survivor in my sights had shrugged off my first few shotgun blasts, leaving me at the mercy of his assault rifle. He turned, shouted, and aimed. Then his gun clicked too, and I charged him with my tomahawk.

It was a glorious moment, but nothing else in Escape From Tarkov has lived up to it.

Escape From Tarkov is the name, escaping from Tarkov is the game. You spawn in on one of six current maps, have a rummage, then get out of dodge with as much as you can carry. In your way are a mixture of NPCs and players, the latter of which will almost certainly have better gear than you. That's fine, because they'll almost certainly shoot you before you have a chance to spot them. Especially if you're playing when it's really, really dark.

It's in beta, so I best chuck in some caveats. The bugs and occasionally laggy servers are offences that can be waved away as early access indulgences, and I can only hope that the worst of the other guff (more complaints incoming) will get cleared up. At the end of the day, though, it hardly matters. I'll always find Tarkov conceptually off-putting. 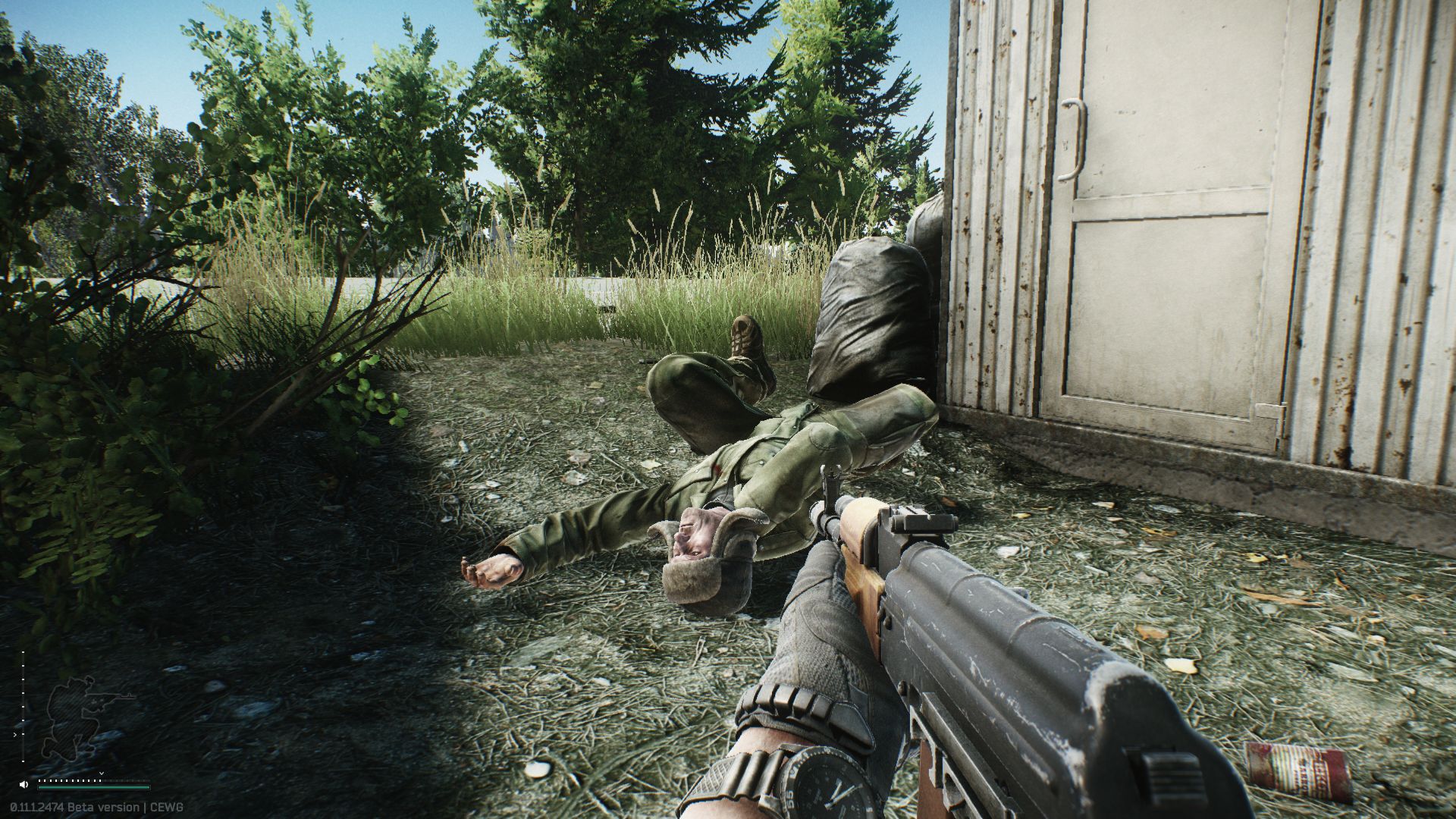 My overarching goal can't be the acquisition of better loot. Not when that goal is stated so nakedly, and not when pursuing it feels like so much work. As a means to an end, sure! My patience for trawling through buildings in Plunkbat is bountiful, and I've whiled away many a happy hour on Destiny's treadmill. In both of those games, though, I'm playing with a broader purpose: there are objectives on the horizon, and I want to be best equipped to shoot them. Tarkov wants me to loot first and ask questions later, but I can't stop asking "Why?". 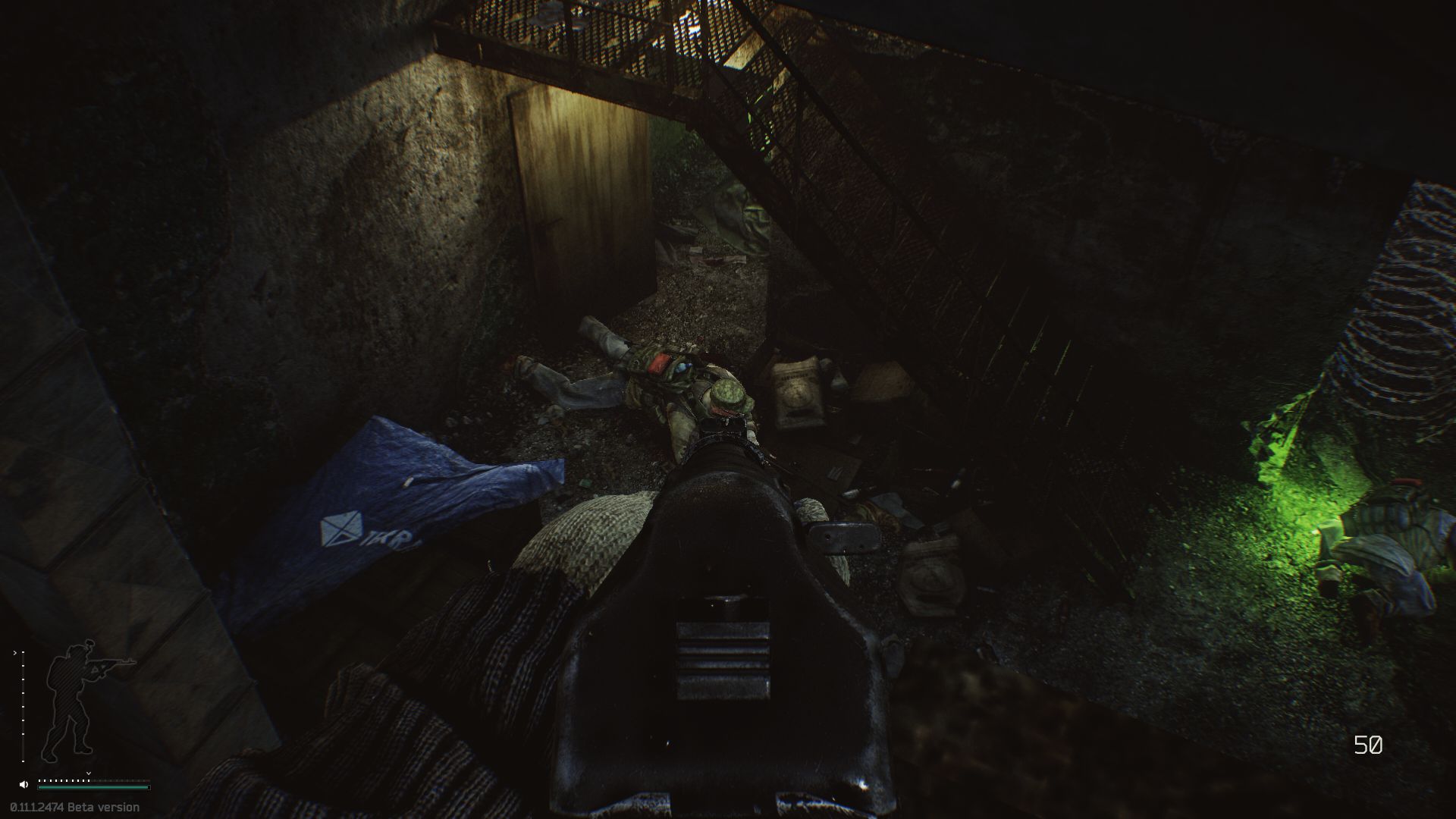 Making insurance decisions is work, but the toil doesn't stop there. In fairness, part of that toil is embedded in military simness which others will find endearing. The in-game ammo checking. Weapons with more than a dozen attachments, and buttons that let you flop your character into almost as many positions. It's all very involved.

Great, you might say. "I like my shooters fiddly." "Granularity is good." What is unequivocally not good, though, is having to wait for a search timer to finish on every box and bag you're unfortunate enough to dip your fingers in. Then for another timer to transform whatever you've found from a silhouette and into something you can actually equip. Bizarrely, that black box problem extends to the out-of-round shops, which already involve more faff than an airport. Just look at them. 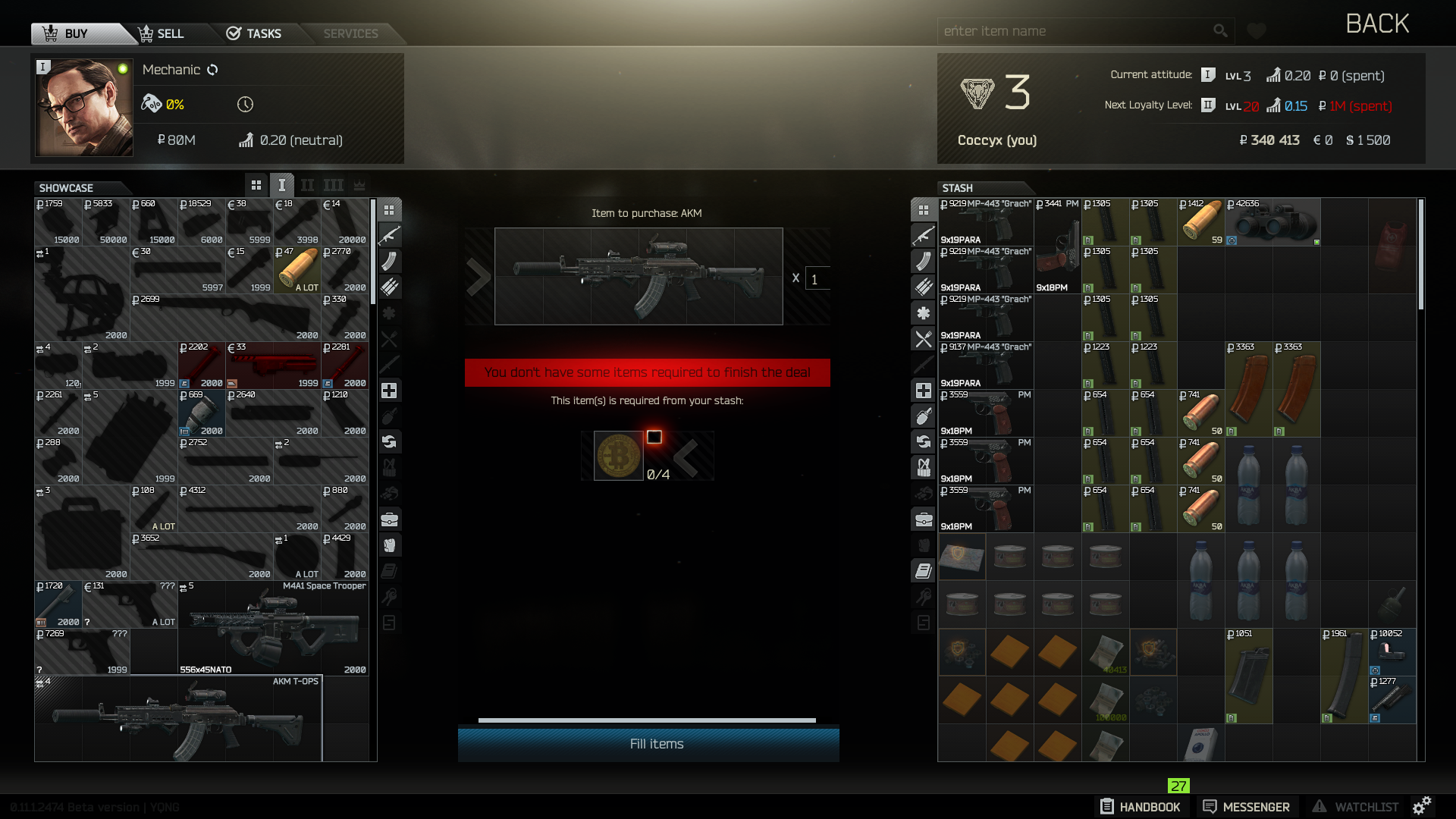 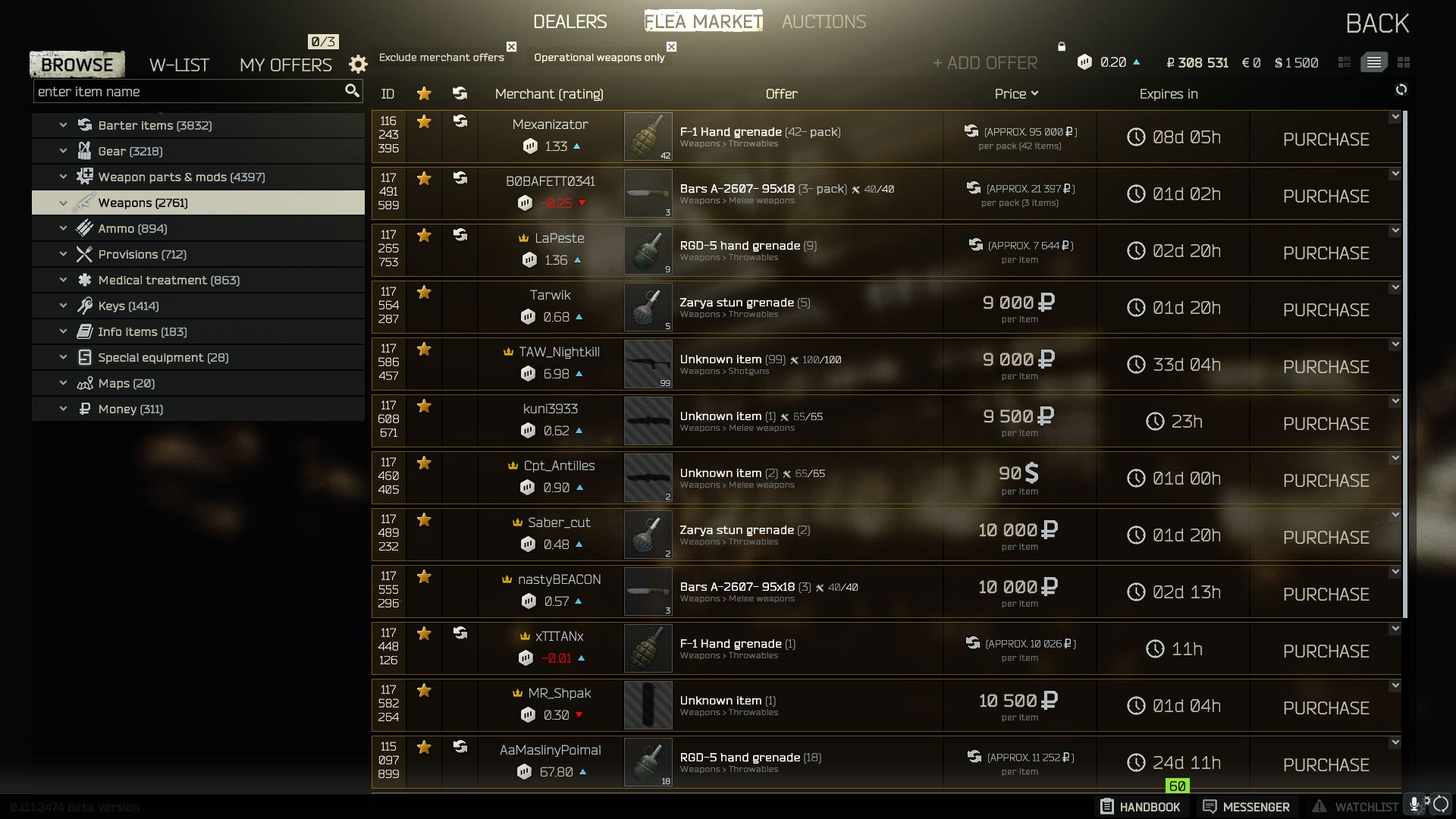 The first of those screenshots shows one of the seven traders, who have cool names like "Ragman" or "Skier" but lame currency restrictions like bitcoins or horse figurines. I eventually found out, through googling, that those bitcoins are rewards for completing quests - finding stuff or killing stuff. This ensures that only the most experienced players get access to the deadliest weapons. Hurray.* (I still don't know what's up with the horse figurines.)

Money can also be spent on the player-run Flea Market, where you can fleece your own gear. I tried to sell some cigarettes, but wasn't a high enough level.

I did have one break from the deluge of faff. It was an actual deluge: a storm with proper thunder that lagged behind lightning like it's supposed to. I was escaping from the Darkov, inching my way through woodland drenched in blackness, rain and atmosphere. For that brief life, I stopped worrying about loot and just lost myself in wander. Then I got shot from behind. 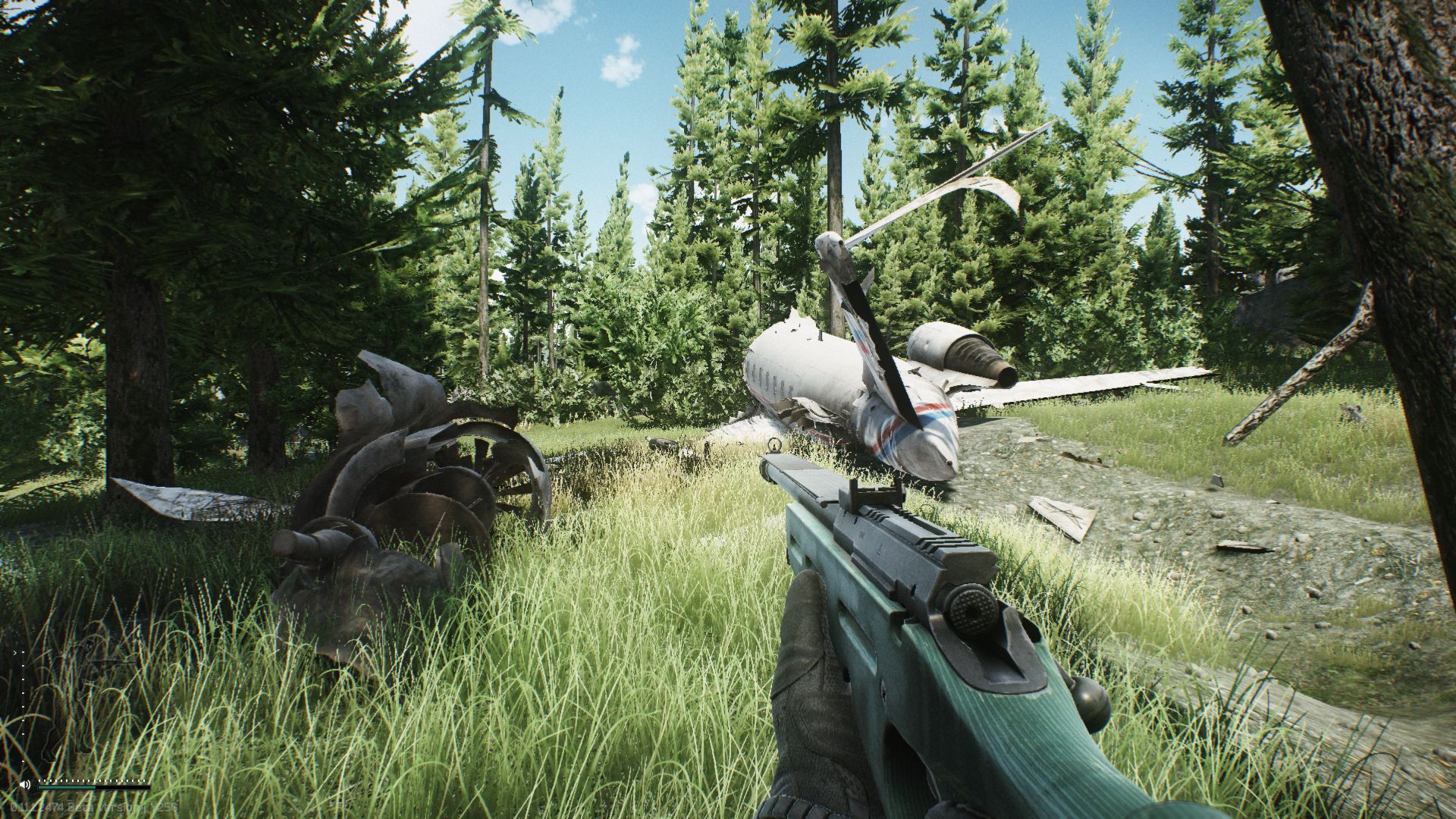 Nearly all my Tarkov anecdotes end that way. That melee from earlier? I won the stab-off. Then, while I was searching the dude's corpse for something to stop myself bleeding, someone snuck up and shot me. I've only managed to escape from Tarkov once under my own steam, and that was just with a measly shotgun. (You can spawn in with so-so gear as one of what are normally NPCs, you see, then keep whatever you scarper with.)

My other successful escape was with friends, when I basically just followed their bums to victory. That's another off-putting oddity: you can play in up to groups of five, pitting loners against impossible odds. It was nice being the bullies, but I feel for the bullied. Even though two people did manage to ambush us, and I'm pretty sure I accidentally killed my pal Greg.

Here comes the rub. I checked into Tarkov because I saw all my friends having a great time there - and they still are. They're going to read this and tut at me. But I am not like them. Dan best sums up our differences: "it's the game for people who find screens like this appealing". 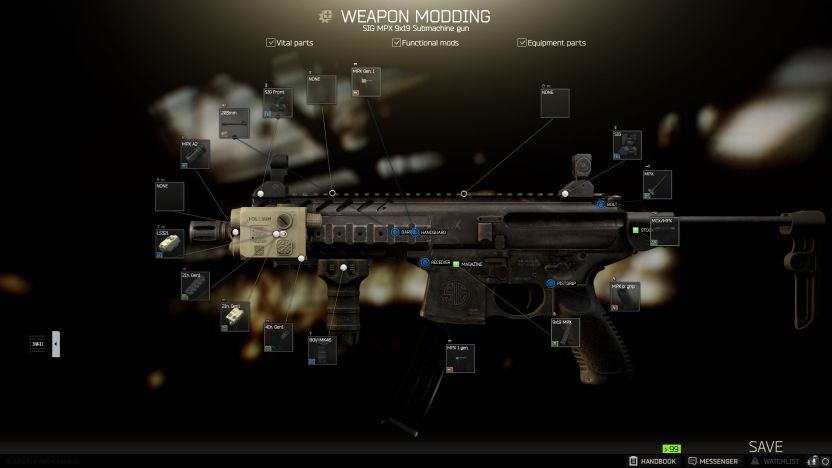 That makes me want to run away screaming. For me, Escaping From Tarkov is a hollow endeavour. Empty in purpose, brimming with faff.

*I've since been told the weapons in the shop are pre-made configurations, and there's nothing to stop you buying all the individual parts. Apart from having enough money to do that, which you'll only have if you're experienced - or if you bought one of the more expensive versions of the game.