Space conniving sim Eve Online will round off celebrations for its 17th birthday by bringing an end to the Invasion update with a massive invasion.

Newbie void villains, the Triglavians, have been vaguely menacing players for almost a year, but they're about to arrive in force, starting a war with regular space that players can join on either side. The outcome of all this will depend on players, and according to CCP, it'll have lasting consequences on the game's playable space.

Last year's sudden invasion by Drifters, a familiar but generally inert NPC faction, took players by surprise. This was the opening of the Invasion expansion, and it marked what I might tentatively call a new era for the enduring, ancient MMO. The total lack of forewarning was a big, if temporary shakeup to the established player factions, and CCP have followed up over the last year with a more frequent schedule of smaller, experimental updates as part of its new "quadrants" system. Earlier this year they unveiled the frigate escape bay, and April saw a revamp of how the oft-underlooked Lowsec regions worked. You can read a bit more about that in our interview.

This latest devlopement is the culmination of the Invasion update kicked off by the Drifters, but it seems the latter might have actually been a side effect of something the enigmatic Triglavians were doing out in "abyssal deadspace". That's an oogie dimension players can only access by finding special "filaments", and it's extremely dangerous so of course people have been poking their noses in to get at rare and valuable artifacts.

There have been other strange occurences in Eveland too, as authorities found a big ol' mystery spaceship apparently powered by a tiny sun, and an apparent threat was broadcast to all the billboards in regular space. The Triglavians were the likely source of all this and though players could previously fight them, or even help them out in limited areas, they're now ready for a full on invasion. Eve's new NPC defence organisation, EDENCOM, will attempt to push them back, and naturally players are asked to get involved to help out, and for that sweet loot. 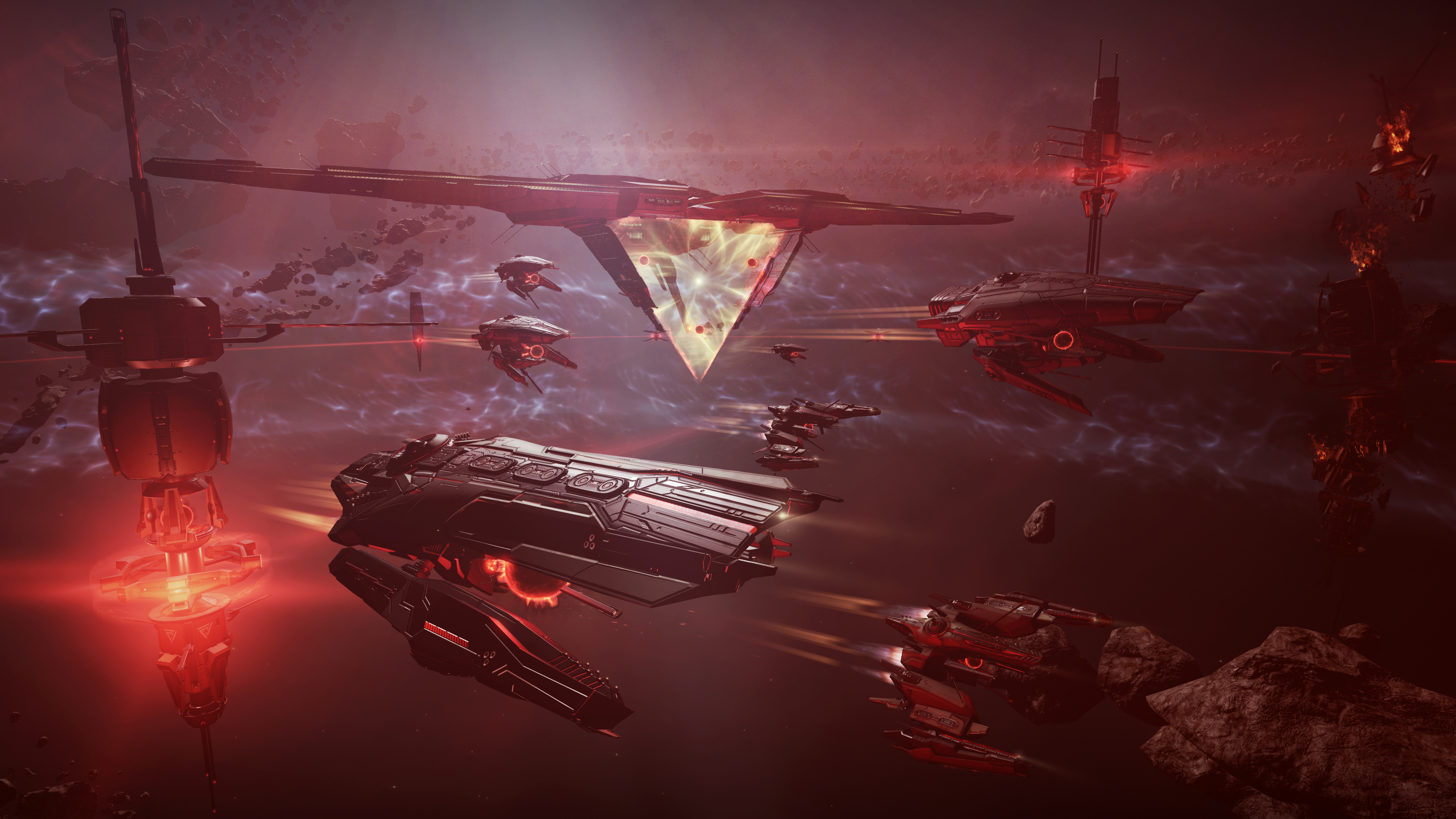 Fleets will appear throughout known space, even including parts of the generally "safe" (a relative term in Eve) high space, and gradually ramp up their aggression as the weeks wear on. Both EDENCOM and the pythagorean invaders will erect mega-structures and deploy colossal new ships. Players will even be able to join in on the Triglavians' side, changing the outcome of the whole storyline. It's a fight that will, according to CCP's creative director Bergur Finnbogason, "deliver a universe-changing event with a series of activities and player-driven decisions that will span the summer and change the landscape of EVE forever!”

It's been a rough year for a lot us, and I can think of worse ways to get away for a while than joining a big ol' spacenerd war for a few weeks. Eve remains free to play, although subscribers will raise character skills faster and have a lot more options. All that stuff you had in your hangar back in the day is probably still around, you know. Maybe it's time, eh?