If you click on a link and make a purchase we may receive a small commission. Read our editorial policy.
Premature Evaluation is the weekly column in which Steve Hogarty explores the wilds of early access. This week Steve is moving house, so Alice Bee is covering for him by playing Failed State, an unfinished exploration RPG survival zombie thing.

I don’t want to become known for always talking about a thing (like how we all gently rib Matt about being a philsophy-toucher in a way that doesn’t amount to workplace bullying whatsoever). This is why I’ve tried to stop yelling at office co-workers about Chernobyl. I don’t want to be Appropriative Post-Soviet girl, who is probably the rubbishest of the X-Men characters. So my disclaimer here is: I swear I didn’t know Failed State, a 2D pixely action adventure thing, was a post-Soivet post-apocalyptic game before I started playing it.

Failed State has its own disclaimer of the not-based-on-real-events-or-people variety, which is odd because it’s set in a world where the planet, ravaged by technological and natural disasters, is now dealing with zombies of a mushroomy, mycelium extraction. So if you’re a real life one of those, be assured that Failed State is not taking the mick out of you. Things it is: bit survivaly, bit shooty, bit good. And about 45 minutes long. 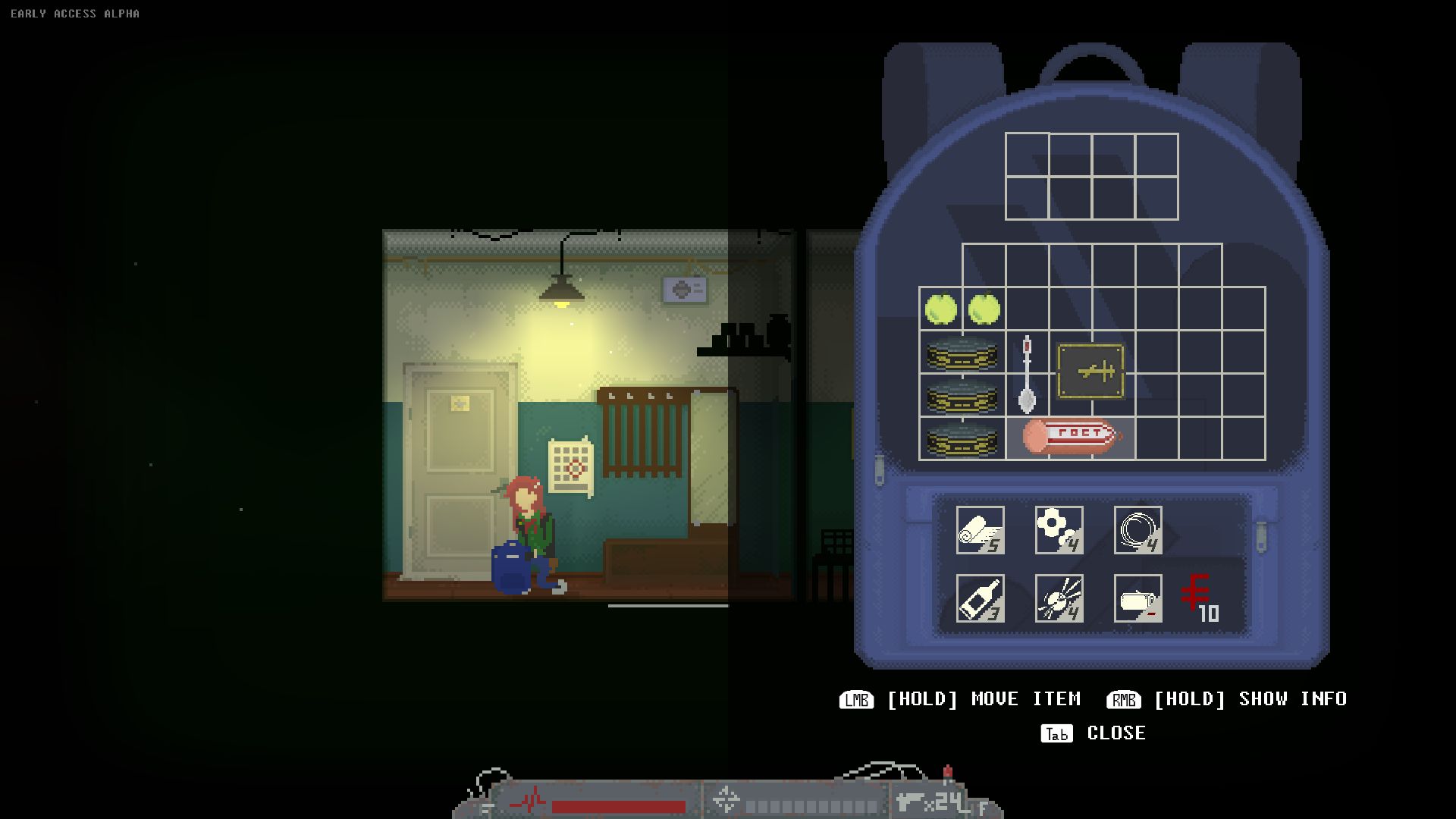 The other thing I didn’t know when I started playing is that it’s sort of a paid demo right now -- though there is a free one to try out as well. The devs are independent and say they’re going to use the money from any early access sales in the development of, er, the rest of it. The next update is due in August or September. But I enjoyed what they have so far, at any rate.

It is set somewhere in Ukraine, in the 80s-ish, and there are still posters and murals of a man who looks very much like Lenin on some of the walls. You play as Rose, a young woman with a motorbike, a will to survive, and almost definitely a mysterious past. Winter approaches, and Rose needs to stock up on food and warm clothes before it arrives, puts its feet on the table, and uses all the expensive organic pesto because it assumed any food in the fridge was for everyone. 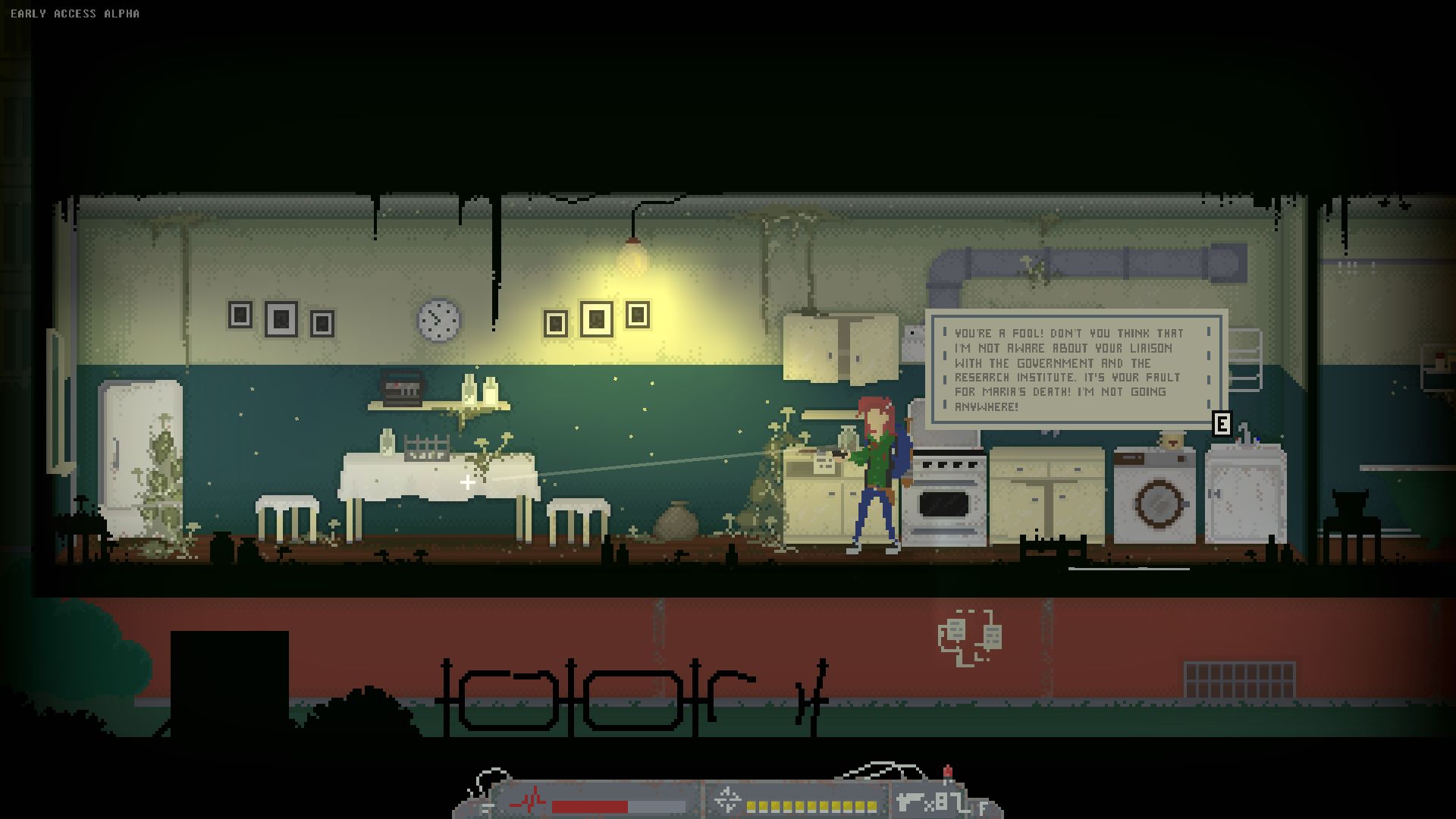 This means poking around abandoned apartments, or a nice shop full of tins of dog food and a note saying 'don’t touch the dog food', to see what you can scrounge up from boxes and shelves and lockers. Given all the red-and-yellow set dressing, and the notes you find about mysterious army jobs, and the little gobstopper-machine-lookin’ robots saying there’s been an evacuation, I don’t think it’s immediately unfair of me to start thinking “Chernobyl exclusion zone” and "collapse of the Soviet system", but on the other hand I probably wouldn’t have got there as fast without recent cultural context.

Sadly there isn’t anyone around to ask any more, as every has turned into a milky-eyed zomble. The combat, wherein you try to fend off these zombies, or sometimes some very big angry rats, could do with rebalancing. Rose can shoot, with simple enough point and click controls, or wallop things with a stick, but the hittin’ stick is hardly worth getting out. Failed State forces you into a little balancing act whereby reloading your weapon means you lose any bullets left in the clip, forever. Bullets aren’t in plentiful supply, but reloading costs a couple of precious seconds if the zombies are on you. This would be good, but If you let yourself get swarmed you’ll be eaten before you can reload the gun, and the stick is useless to give you breathing room. It’s a game over rather than a hard-won escape, and the latter is always more fun, isnt’ it? 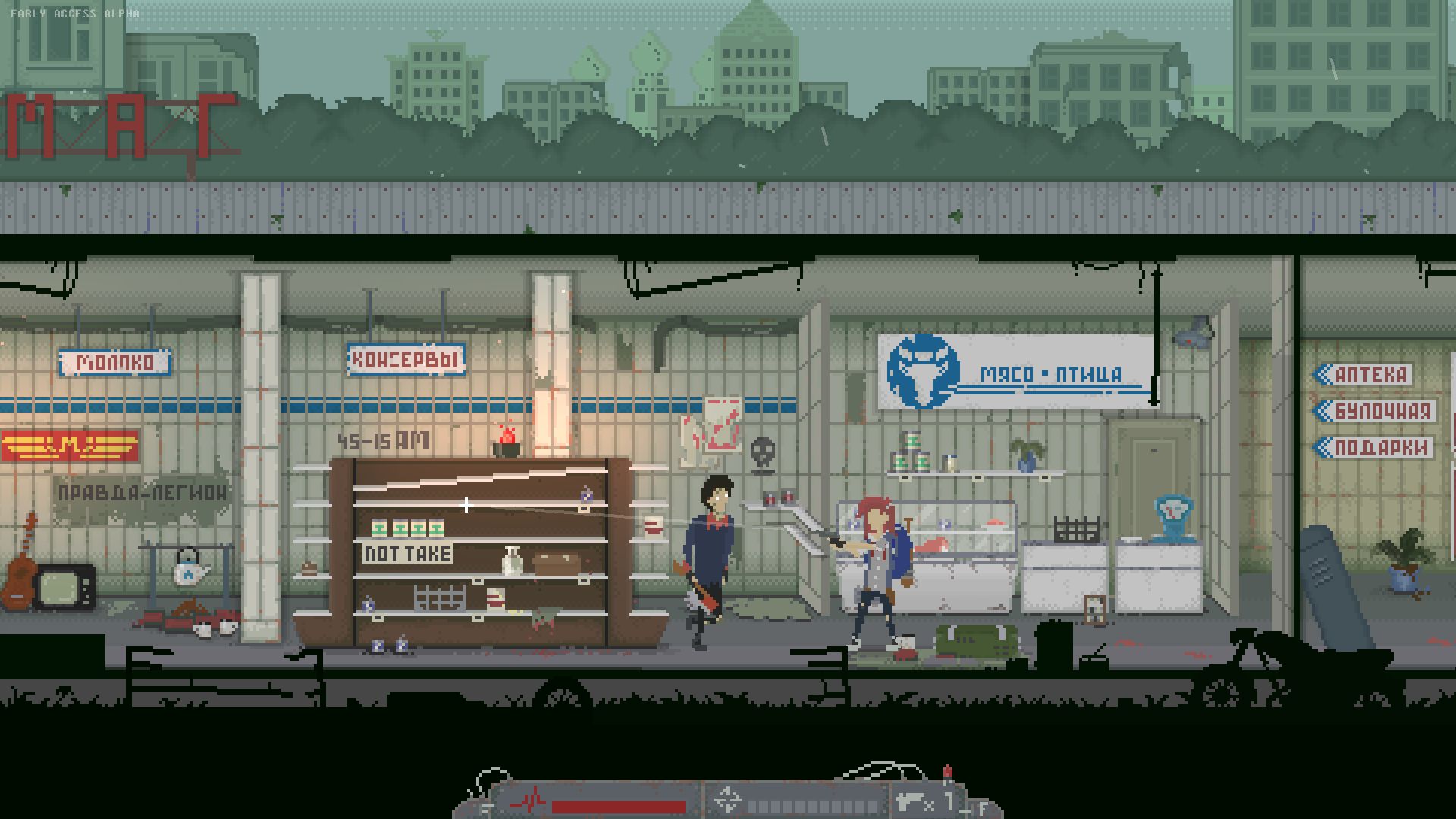 Bullets can be crafted at Rose’s home base, along with other consumables like bandages, but only before you head out on your scavenger hunt. You might find a bunch of materials to make more, but until you’re back at the work table, they’re no help. Some items, like food, will take up space in Rosa’s backpack, and you have to jigsaw them around old-school CRPG style, but they’re also useful in some simple puzzle situations. A growling dog can be placated with half a sausage. And then you can steal all his old owner’s stuff.

But Failed State isn’t a repetitive cycle of shooting and looting and crafting until you’ve got everything on your list, and then you get another list and do it again, which is what I was expecting. Instead, you get hints at the shape of what could be. You can collect currency, which could presumably be spent somewhere, for example. During the course of the game you realise that the tutorial is really a sort of flashback, see a creepy glimpse of that past as seen through Rose’s guilt about… something, and meet a father and son who are being hunted by some kind of paramilitary rebel group. There’s an underground facility that seemed to have been capturing and experimenting on children. Blimey.

Lot to pack into 45 minutes, eh? Lots of little webs, little clicky secrets. Imagine what they could do with a few hours. I was not able to, so for what it’s worth I did buy the £3 full version myself with my own money, despite my struggles with the combat element, to potentially increase the odds of my finding out. I liked Rose, a girl with a gun and a motorbike. Plus she has the same power stance and fingerless gloves as the bass player in a pop-punk band. So, you know. I'm in.