It’s half past seven in the evening and I’m scraping rust off a greenhouse. I hate scraping rust off greenhouses. It’s noisy, it’s boring and it takes up time that could be spent doing other tasks in Farmer’s Dynasty. Activities like driving through your neighbour's field with the thresher turned on, or dumping all the grain you’ve collected onto the head of Steve, the local shopkeeper. Don’t worry, Steve doesn’t mind. Steve’s not human.

Farmer’s Dynasty is a wobbly farming sim currently in early access. It’s about being an absurd wax man in a plaid shirt who inherits a run-down farmhouse, along with some fields, barns, sheds and silos. You plod around clicking on roofs, bricking up walls and cutting the grass until it looks like a passable home, then you get farming and socialising. You can grow seeds in the greenhouse, work the fields, keep chickens, and harass the women you meet with poundshop chat-up lines. It’s like Stardew Valley, if Stardew Valley was made from stale Playdough and left to ferment in a bog.

There is some pleasure in it, and I’ll get to that soon. But first, you have to understand what it’s like to live in this stodgy agricultural fever dream. It’s partly a straight sim – there are machines to drive and crops to harvest – but it also has a basic social system. You can talk to neighbouring farmers and do jobs for them. This gets you social points, along with other rewards like equipment. But you can lose social points by being a bad neighbour. Bad neighbours do things like drive through fields of wheat to shave 100 metres off their journey into town. 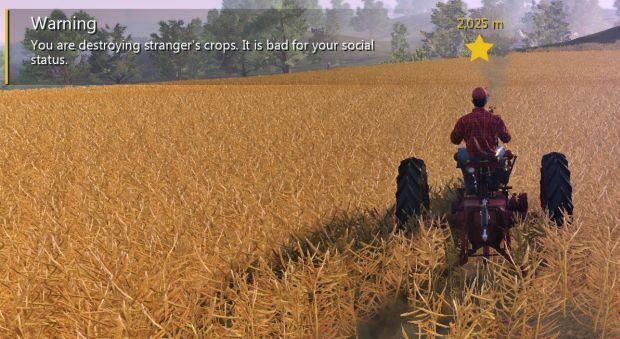 These social points, as far as I can tell, determine whether some women will marry you (yep). I’m not certain about the precise mechanics of married life, since I never had the money to buy all the jewellery and chocolates required to cement any such alliance (uh huh). But I have read that having a wife is the only way to obtain cooked food in your own home (again, yes). She's also good for spawning children. You currently can’t marry other men, or play as a woman with a husband.

Anyway, let’s put that over there for a moment. Let’s just see what it’s like to play.

My life as a farm man began with odd jobs. I fixed some roof tiles for my neighbour, Mr Tutorial, and earned a rusty red tractor. With this I decided to explore the map. Should I go to church to seek respect? Or perhaps to the train station in search of work? No. I will go to the lakeside, where an icon tells me there’s a "social gathering". As I drive, at a steady 23 kilometres per hour, I imagine the scene awaiting me. Maybe there’ll be some straw-chewing NPCs having a chat, or crowds drinking beer with animal torsos sizzling on bisected oil drums.

Soon, I arrive at the lake. There’s a single British guy in sunglasses looking at the wall of a barn. 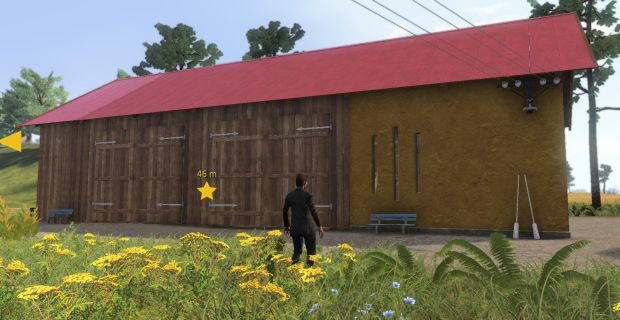 I approach him and we look at each other for some time, while I consider what to say from my four options.

“Them politicians,” I finally offer, “what are they thinking?”

“Let them come live with us for a week,” he replies, “they’ll see what a real life is.” 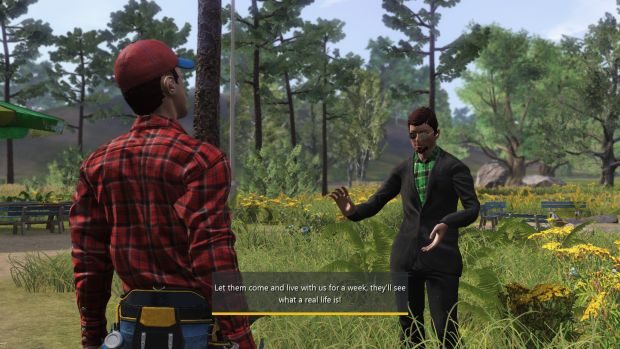 Neither of us clarifies which politicians we are talking about, and I leave.

Determined to find more people, I make a short visit to a small town. It has zero inhabitants and the atmosphere of a Half-Life 2 level waiting for Gordon to arrive. 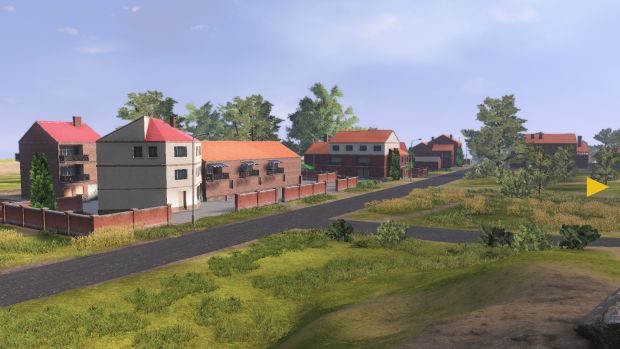 In fact, the whole world is eerily empty. There's no traffic on the roads, just you, and any NPCs you do meet seem to stick around their respective homes. I decide to stop faffing open-world style, and return to quest markers. I take a job from my neighbour Clara. 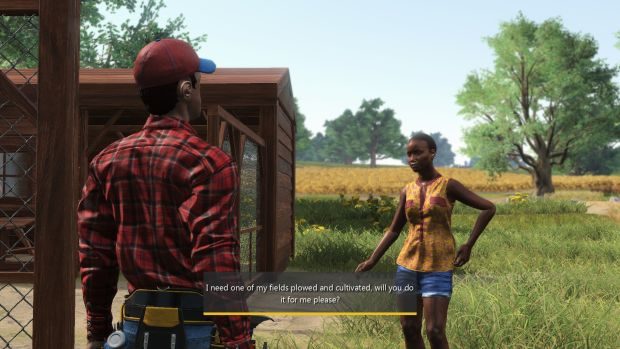 She wants me to plough and rake a field, in preparation for some seeds. This is where the game goes from societal jank to familiar sim territory. 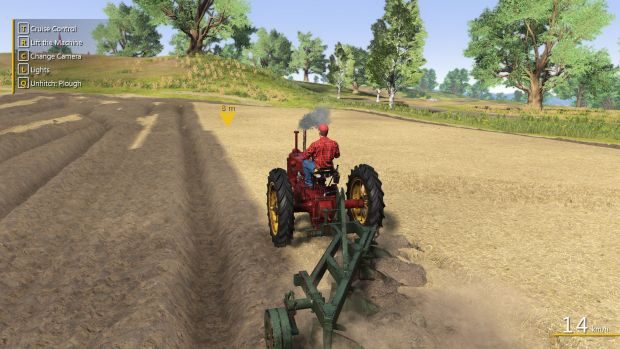 There’s a simple satisfaction to this toy farming. It's similar to a good scrubbing in Viscera Cleanup Detail, the easy-going pleasure you’d get from doing a colouring book. Repairing roofs or fences is a dull matter of filling in pips that appear on your HUD, but ploughing, harvesting and grass-cutting has an absent-minded hypnotism to it. The dead-brained contentment that comes from turning brown into another, slightly darker shade of brown. It’s moments like this that I understand the allure of farming simulators, the simplicity, the solitude, the --

“Information!” says the game. “Clara seems to be really fond of you.”

Thanks, Clara. I’d feel the same but there’s a woman called Ella who I like better. She stands by the lake 500 metres away and is identical to you in every way. 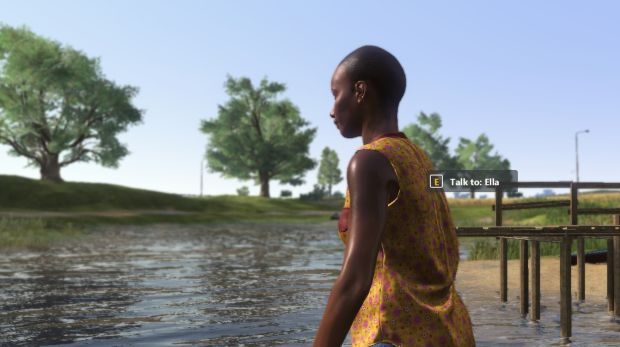 And anyway, enough of this ploughing. I’m going to church to tell a woman in a hat who stands outside the church, probably because she can’t enter the church (nobody can enter the church), that she is “more beautiful than any flower”, that she “really looks beautiful today”, that she “looks like the princess I’ve been waiting for my entire life”, all this and more, until the voice actor responsible for her lines of dialogue stops bothering to adhere to the subtitles and our entire conversation ends in an abrupt and welcome silence as we gesticulate like two marionettes melting in the sun. 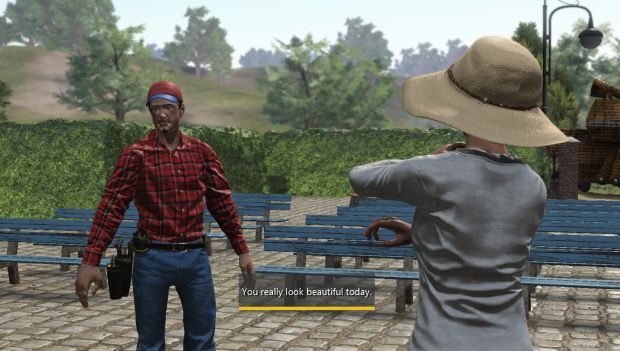 In other words, this game is garbage. It feels like it’s been made by a cow masquerading as a human. A Gary Larson bovine wearing a shirt and tie, perpetually on the verge of a nervous breakdown, lest he be discovered. Yes, he thinks, sweating as he draws up yet more features, this is definitely the way humans behave.

I resolve to give it one last chance. Hopping into my tractor, I head to Steve’s farm. Steve has a trailer he’ll give me for doing some odd jobs. But guess what’s top of his list? It’s the greenhouse. This will be the fourth greenhouse I have fixed. 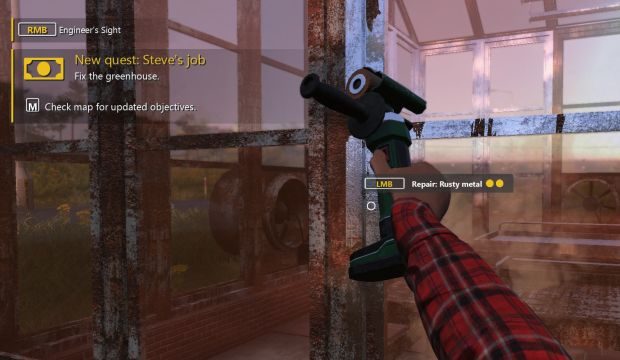 At 7pm in the evening, I’m still there, scraping off rust as the cricket sound effects suddenly switch on, like an alarm clock. At 8pm, I’m still there, pumping nails into the barn roof, the game warning me that I am “seriously hungry”. I ate my last tomato hours ago. At 8.30pm I finish my chores and Steve gives me the trailer. Now it is time to drive the 2.5 km back to my own farm. 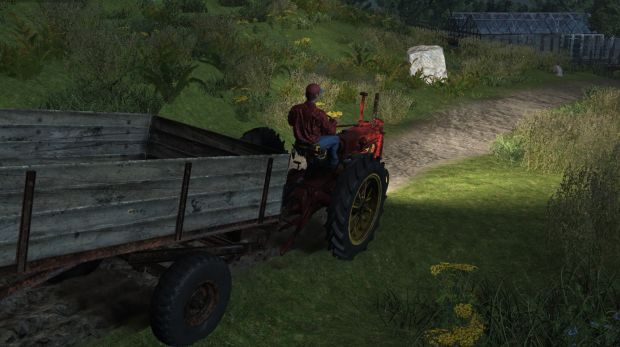 At 10.20pm, with a “stomach like a volley ball” and shoe laces that “look like pasta”, I finally reach the bed in my weathered, creaking farmhouse. I’m given the option to sleep until tomorrow morning or “rest for a week”. I understand this latter option to be an invitation to coma and death, and promptly click on it. Fade to black.

Not long enough. Soon the screen fades back in and I awake, rejuvenated yet still hungry.

There’s an absurdity to the life of these cow people that some will equate to charm. Others will be able to ignore the social puppetry for a taste of that sleepy colouring-in. I managed to reach neither form of acceptance with Farmer’s Dynasty. I only wish I had died in my sleep.