First-person walking simulators can be pretty low-budget. That isn’t to say that they can’t look beautiful, as the Hebrides does in Dear Esther, which pioneered the 'walking here for a bit of story there' sub-genre. Making super detailed character models and animations? That’s complicated and resource-heavy. It’s no surprise that an indie developer doing a walking sim might eschew giving their characters actual walk-on parts.

You often find yourself exploring a world where the story has already finished and you’re putting the pieces together, or following what feels like a very elaborate walking audio tour of a museum. It’s not that these elements are badly designed, but they can feel a bit disjointed or archaic, especially if you accidentally experience them in the wrong order. Firewatch was different. Instead of triggering monologues or mini radio plays, what we got actually emulated a straight-up, naturalistic conversation between fire lookouts Henry and Delilah. Two lonely strangers bonding over the summer of ‘89, with nothing more than a walkie-talkie. 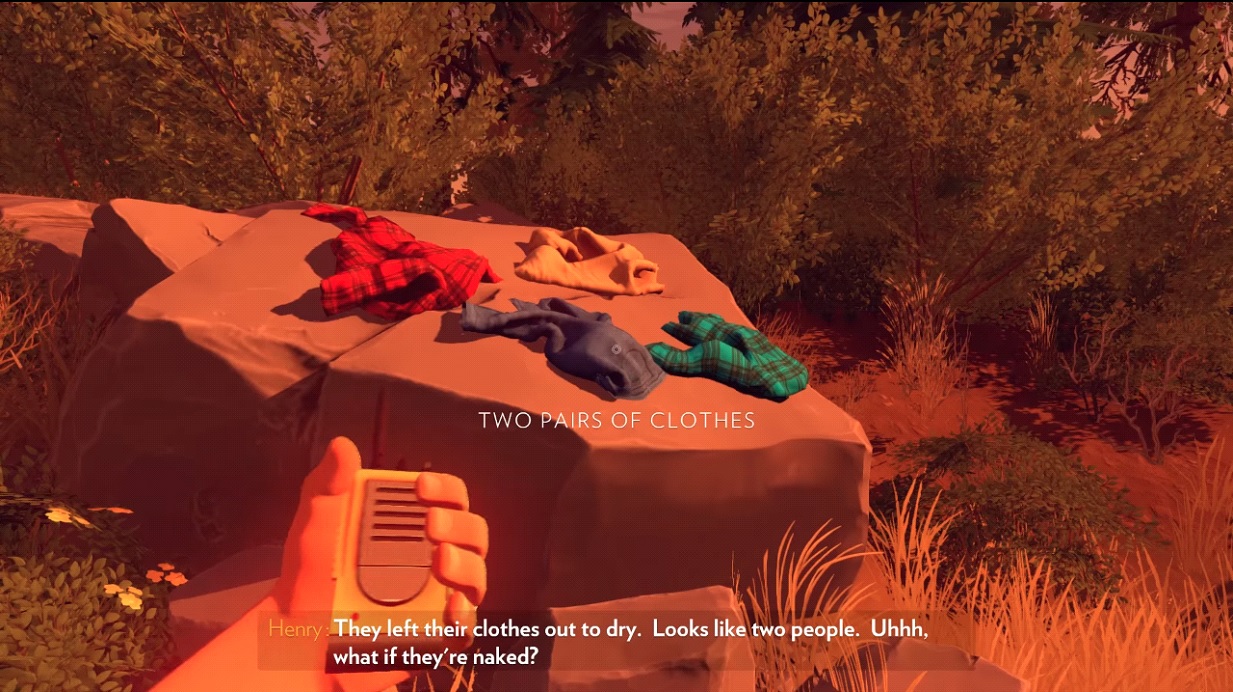 For Delilah’s voice actor Cissy Jones, who deservedly won a BAFTA for her performance, the game’s success hinged on the characters’ conversational dialogue and the authentic relationship that builds up between the two. “If the conversation wasn’t believable, the game wouldn’t have worked,” she says.

Recording the dialogue for Firewatch differed from usual voice recording practices, when voice actors tend to record their lines in isolation with nobody to bounce off. Since Henry and Delilah spend the whole game conversing with one another remotely, the same conditions were fairly easily achieved by director Sean Vanaman Skyping in both Jones and Henry’s voice actor Rich Sommer from their own home recording studios, whilst directing them in real-time.

It also helped that Jones had never seen Mad Men. Most people would likely recognise Sommer Harry Crane from the show. “We’ve never met before this. We recorded the game chronologically so when we have that awkward ‘What’s wrong with you?’ moment at the beginning, that was real,” she explains. “And then we built a friendship that way through the two years of recording.” 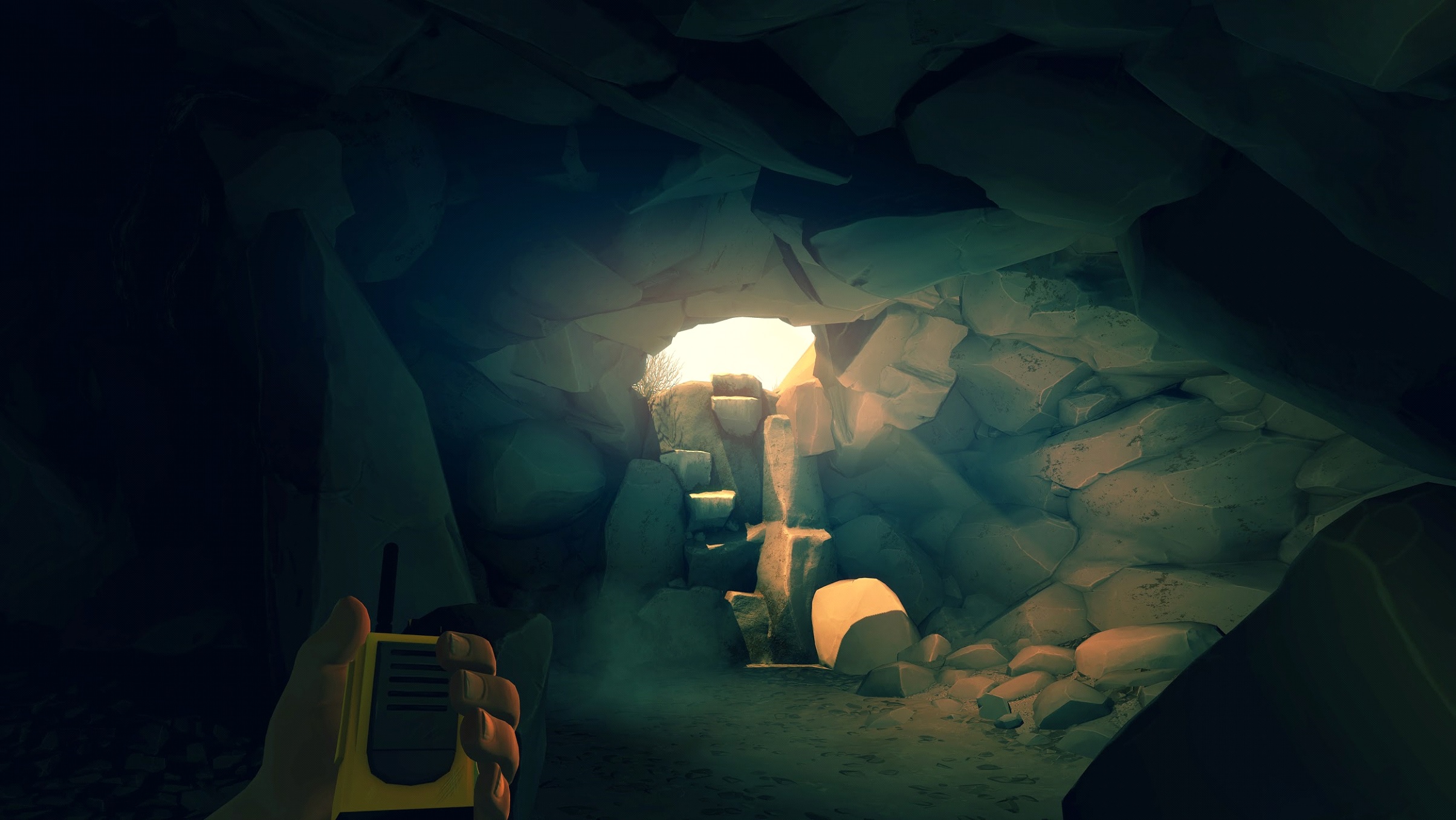 From strangers to confidants, there’s a two-way dynamic to how this relationship builds in the game (with possible romance on the cards if the player takes the conversation that way). Delilah isn’t another one of those off screen characters who just talks at you, or otherwise dumps a load of exposition; you’re actually engaging in conversation with her, directing the tone of your relationship whether it’s opening up about past regrets or indulging in silly banter.

The orange radio that you do this through is a pretty common sight, as Henry holds it up in front of him with his big papa bear hand. It gives our schlubby protagonist a physical presence absent from the invisible, weightless ciphers of Gone Home or The Vanishing of Ethan Carter, but it gives Delilah a physical presence too. In Campo Santo's upcoming game In The Valley Of The Gods your companion is right there with you in full fleshy animated form (and with a great head of hair to boot), making eye contact, and giving you a literal hand. But Delilah doesn't feel absent in Firewatch, because the walkie-talkie is an avatar for her.

A criticism often levied against walking sims is a lack of 'gameplay', usually meant as a lack of player interaction with the game world. If the story kind of just happens when you walk to a prescribed point, or where there are interactions, it can feel a bit too point-and-clicky for some players (though not, of course, for Alice O). Thought Henry spends a fair amount of time trekking around the park, in truth Firewatch is more talking sim than walking sim, and it’s a surprise that no other game has tried to copy that walkie-talkie mechanic. With the radio in your hand there’s a literal mechanical input in your responses. Replying to Delilah requires you to hold down shift and choose from a few responses before releasing for Henry to deliver his lines. It mimics how you would hold a button on a real walkie-talkie to talk to the person on the other end.

Multiple dialogue choices might not sound groundbreaking for anyone who’s played an RPG, or indeed a Telltale game (Vanaman also worked on the first season of The Walking Dead), but here it gives Henry and Delilah's conversations a refreshing and immediate dynamic.

What’s great is how the vast majority of these choices aren't of the same gravity as other choice-based narratives. Firewatch is, after all, more of a character piece, and so the interactions are more about gently probing and revealing each other’s personalities in subtle changes of tone, in what is said or left unsaid. 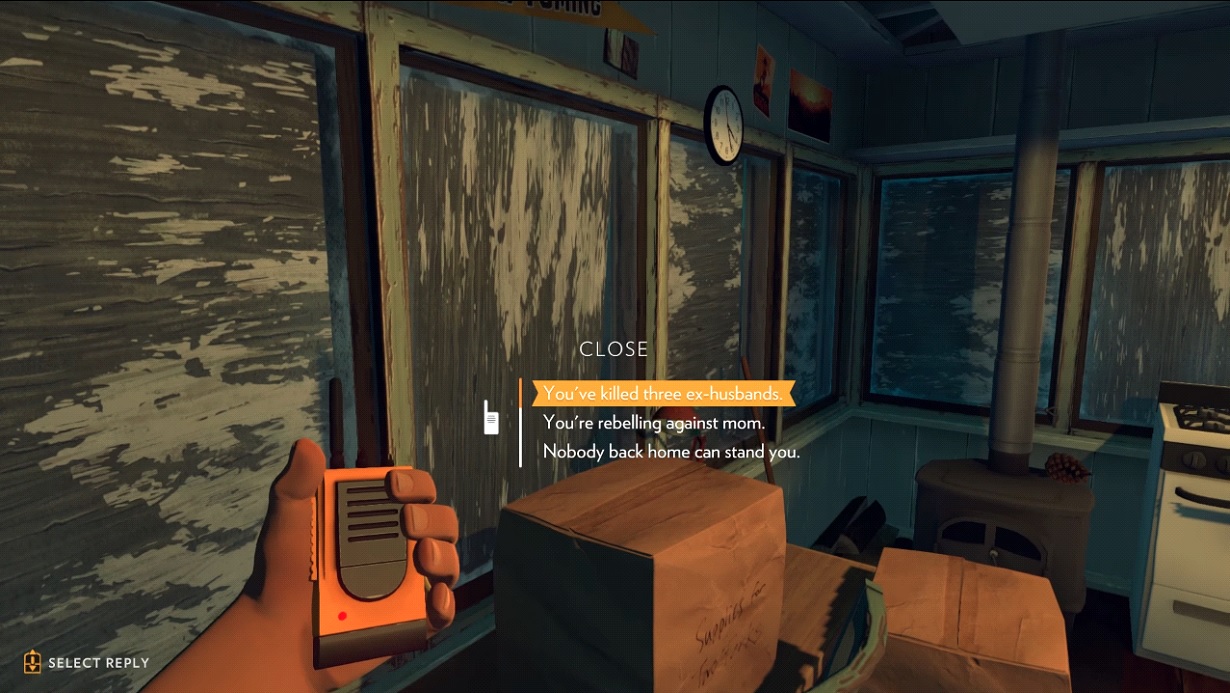 In the very first exchange, Delilah greets you by asking "What’s wrong with you?", before asking you tell her what’s wrong with her. You can play along, responding with the silliest extreme, or you could say something that could be hurtful, making you out to be an insensitive prick early on. In another early scene when Delilah is revelling in her love of awful puns, you can vocalise your disgust or indulge her with equally bad puns of your own. These moments are seemingly trivial to the game as a whole, but together they make spending time with these characters more compelling than the mystery plot that emerges in the latter half.

There are other things out in the world you can interact with or pick up, and better yet, if there’s a walkie-talkie symbol, it’s an excuse to talk about it with Delilah to get her two cents. On the flip side, there’s just as much that can be ignored. But that, too, changes the dynamic between Henry and Delilah. Silence can be deafening, as they say. Especially when it’s only the two of you.