If you click on a link and make a purchase we may receive a small commission. Read our editorial policy.
Developer: Mode 7
Publisher: Mode 7

Release: Out now!
On: Windows
From: Steam, Humble and GOG
For: $30, other currencies TBC

Frozen Synapse 2’s campaign puts you in charge of a security force in a sprawling, cyberpunk metropolis where a rogue AI threatens the safety of the populace. It also lets you choose your character’s name, honorific, and organisation. So, naturally, it was time for Grand Moff Godzilla Johnson to lead the CyberBois to victory.

This is, of course, the sequel to 2011's Frozen Synapse. Through procedurally generated, isometric, neon maps, you’ll gradually fill out snaps of real-time play with tactical minutiae. Individual units can be commanded to move from point to point, to turn and aim, to duck and stand, to cover certain zones, to focus on or ignore certain enemies, and to wait for specific periods of time before and after doing any of these, in any combination.

After planning, but before execution, you can choose to simulate your plan based on the other side’s last known location. If you’re still in stealth, you’ll be shown exactly how the turn will play out. You can make and simulate plans for your opponent too, testing out any number of hypothetical scenarios until you’re sure of the perfect bullety barn dance. Each turn lasts five seconds by default, but you can also opt for long turns that end once every unit has followed their plan to completion, allowing more complicated plans to play out.

It’s a concept so good and involving that it carries the entire game. Perfect and imperfect information meld together in combat that delivers all the satisfaction of second guessing a capable opponent, alongside the cerebral joy of solving procedural puzzles through creative means. As shotguns, rifles and pistols are joined by smoke grenades and riot shields, rock/paper/scissors-style considerations based on range and speed evolve into full-on Rube Goldberg affairs, distilling entire sessions of planning into five seconds of surgical slaughter.

This core loop, as coldly tactical and exact as it has the potential to be, could easily run the risk of feeling soulless in a lesser game; a dry, mechanical puzzle to be solved. In Frozen Synapse 2 you don’t just feel invested, but as if you’ve been jacked in. A cavernous, euphoric soundtrack that seems to pulse through neon gridlines uplifts and focuses, even as it mourns the collapse of a city’s collective sanity. It might be my favourite soundtrack this year, not only for its odd beauty, but for how it sparks friction against the game’s other elements to create an atmosphere wholly unique to Mode 7’s vision of the future.

Belacqua, the game’s sardonic (read: dickish) AI, initially seems a likely catalyst for that same tonal friction eventually becoming chafing. Thankfully, Belacqua is comic relief done right. Berating the player at every opportunity, the holographic head is a sarcastic virus to breach the cyberpunk genre’s firewall of poseur cool and grim fatalism. At the same time, Frozen Synapse manages to balance both apocalyptic dread and socio-political sincerity without ever letting Belacqua’s irreverence Jar-Jar up the tone. 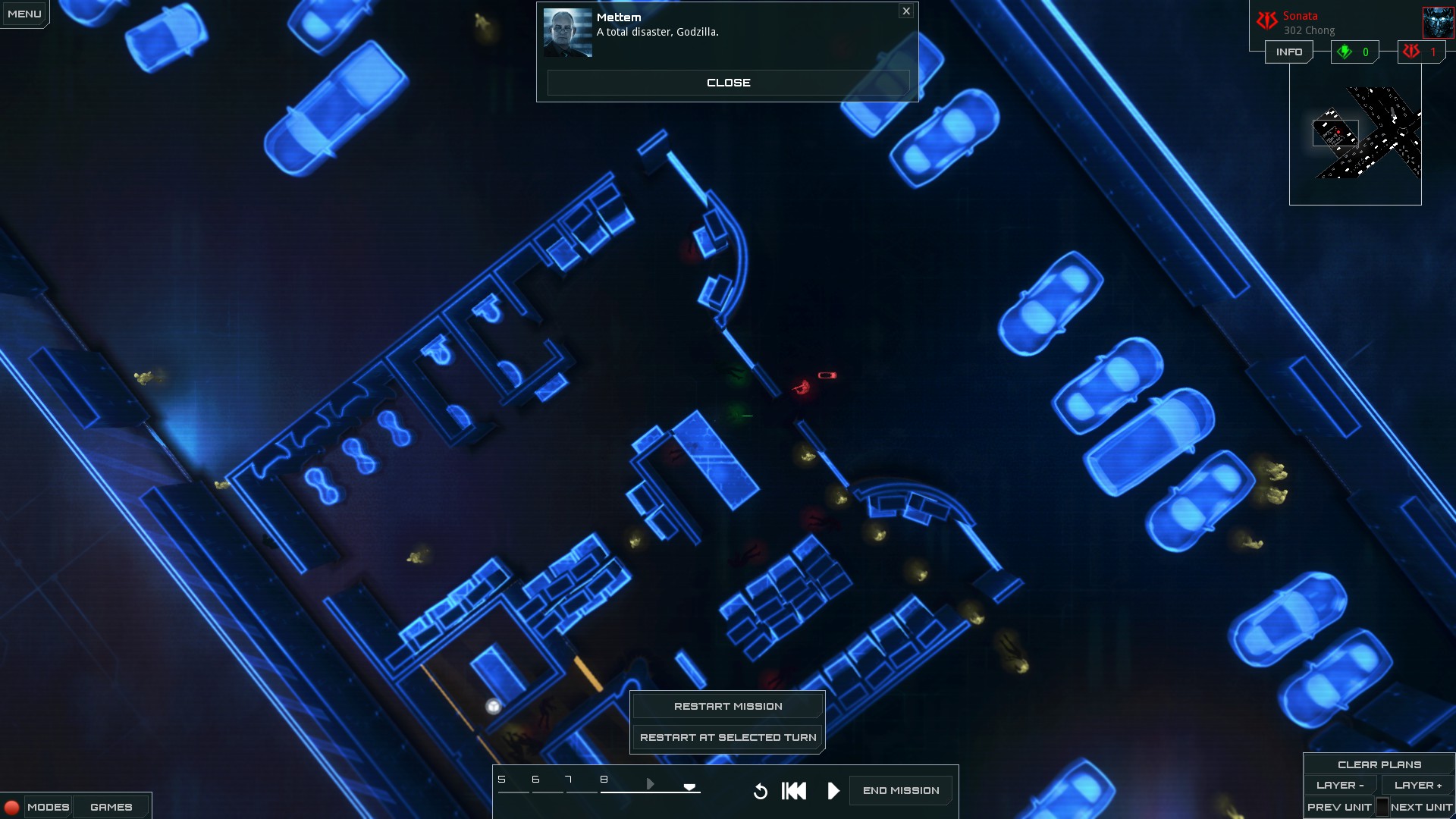 The heads of the city’s major organisations are varied and interesting, regularly dropping lore about the world or their own histories between more expository exchanges. There were times I could have done with a short, supplementary novella to read before playing, and I mean this as both praise and criticism. The city isn’t just fleshed out with history, but positively augmented. It’s a lot to take on while still getting to grips with the systems, but lends individual skirmishes a sense of belonging to a wider conflict, with roots winding back long before you turned up. If I wanted for a bit of backstory though, a more substantial in-game wiki would have been equally useful. There’s a tutorial of sorts, but it’s a bit thin; good at letting you know how to navigate the UI, less so what to do about the economy and diplomacy elements.

Broadly, the city map is a game of control, resource allocation, and keeping tabs on your opponent's capabilities. Incursions by the rogue AI Sonata periodically appear on the map, and you’ll need to dispatch a strike team to the location to initiate combat. Win, and you’ll often take control of a relic. Take the relic back to a HQ you own, and it’s yours. You can choose whether to play the campaign with or without narrative; your goal is either to reach the end of the story, or collect fifteen relics, before any of the other organisations collect seven.

Sonata incursions can appear anywhere, so you’ll be trying to place squads and HQ buildings well enough to be the first on the scene. Squads and buildings cost cash, but so do various upgrades like silencers and ammunition for specialised troop types, so you’ll need to balance military strength and map control. You can find boxes of cash on missions, by completing contracts for other orgs, and even by robbing banks, if you’re feeling extra spicy. Rival factions can be friendly, indifferent, or hostile, and they like setting you against one another, so good luck staying neutral, and both you and the other orgs can set up blockades, ambushing squads and nicking their relics. 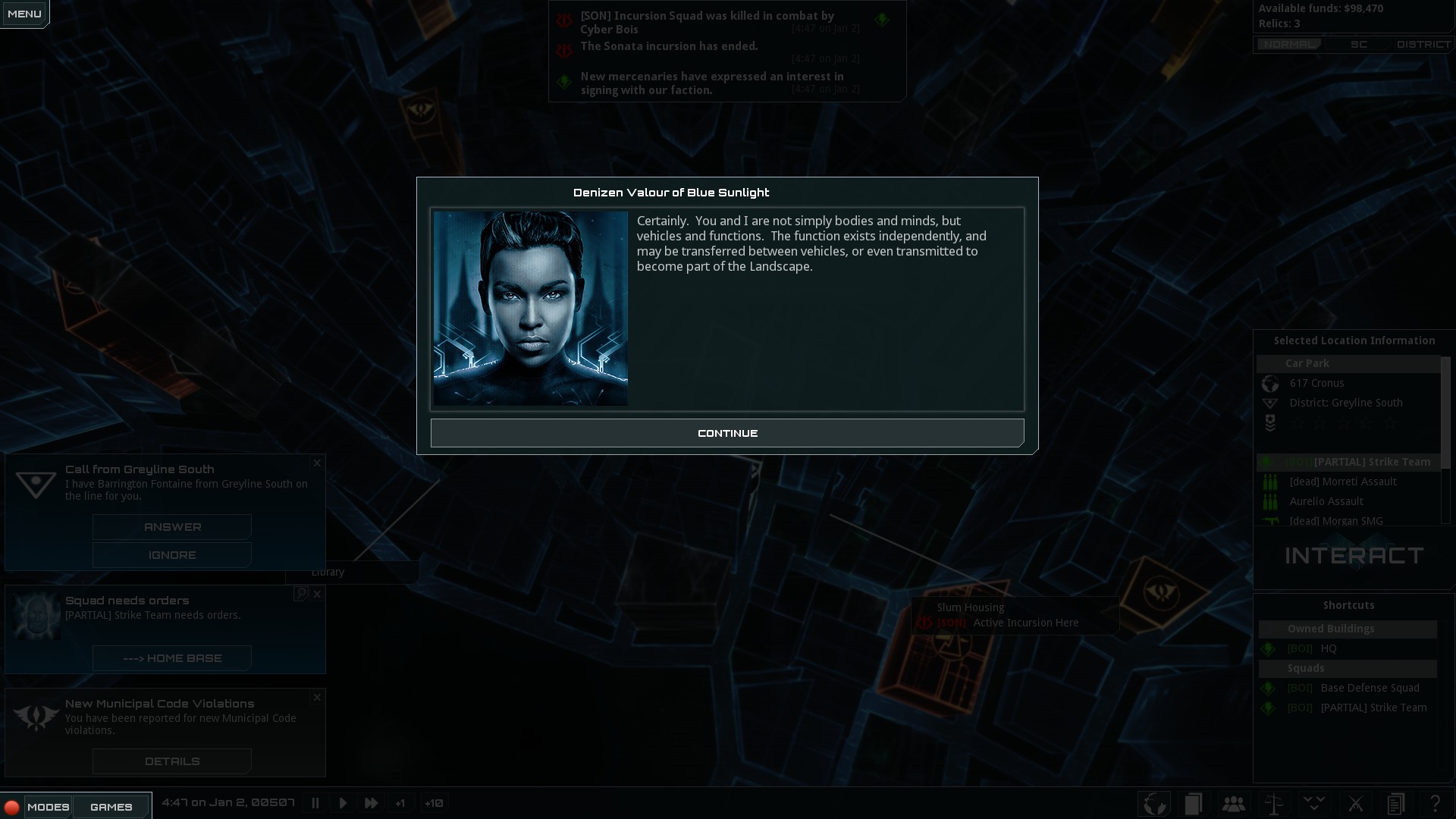 None of these systems should feel too unfamiliar to players who like their X’s in groups of four and tacked on to incorrectly spelt words, but they are a bit opaque initially. About five or so hours in to the first campaign, I was more interested in starting a new one than carrying on. Partly because there’s enough depth here, enough opportunities to maximise efficiency and learn from failed strategies, that clicking ‘new game’ feels genuinely exciting, but also because I’d made quite a few basic mistakes in areas I feel could have been explained better.

The tactical combat isn’t completely spotless, either. It’s good for a laugh on the rare occasion that three enemy pistol lads overzealously charge into their own team’s grenade, but it tends to deflate any tension. To boot, foes aren’t always the best at hunting you down if you move everyone out range. Every single unit is a threat individually, they just don’t always coordinate that well together. On one mission, I had to take down a VIP before he left the map. Despite being surrounded by an entire brass band of heavily-armed bastards, he thought it’d be a great idea to rush straight out the nearest door and into my troops, with no attempt by his retinue to provide cover. On another, my attempt to keep my squad alive for a certain number of turns ended when I just plonked a shotgunner in a bathroom stall, happily making origami ducks from the bog roll while the enemy sat on their tiny red thumbs looking confused.

This doesn’t happen often, though, and the campaign is otherwise good at escalating tension through increasingly complex missions. Warehouses and city streets occasionally give way to airports and HQ invasions, and the game drip feeds new conditions and complications, sometimes pulling mid-mission chicanery to keep you on your special cyberpunk toes that double as laser swords, or whatever. While navigating through square rooms remains tactically interesting, missions based around unusual set-pieces make you truly appreciate the game’s sparse, crisp visual style. 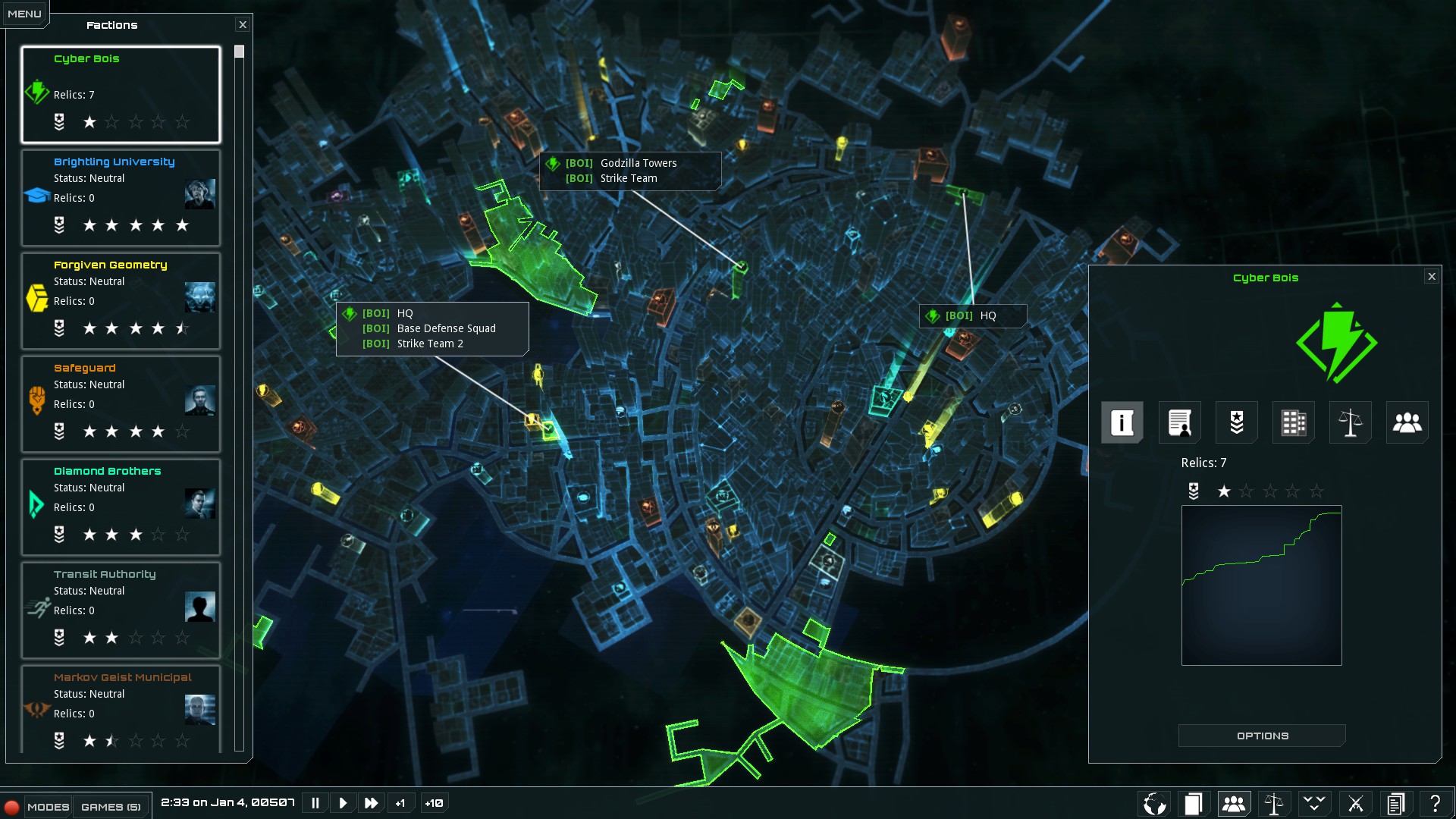 The campaign mode also comes with a whole trenchcoat you bought after watching The Matrix and reading William Gibson in the same week but now deeply, severely regret full of options to tweak. In standard mode, your squads consist of regenerating vat-grown soldiers, but you can limit yourself to just two instead of the normal six, making most losses permanent. There’s ironman mode, which the strategy fans among you may want to turn on immediately (while the ability to save scum turns means you can perfect mission tactics to your heart's content, it does reduce the game to a war of attrition if overused). There’s also insane mode, which allows the AI to see all your moves before making its own. This is a stupid mode for stupid people which I can’t wait to try more of.

Once you’re done with the campaign - or even during, thanks to a nifty little menu that lets you input a turn then come back later - you can go head to head with the most dangerous AI of all: man. There are six different multiplayer modes, each with the option to see each other’s units at all times (light) or only when in line of sight (dark). There’s also a trial mode where you can create and complete challenges to compete with other player’s scores. You can switch between games, inputting a turn on one then playing another while you wait for opponent. There’s even an option to receive email alerts when a match is waiting for your input. 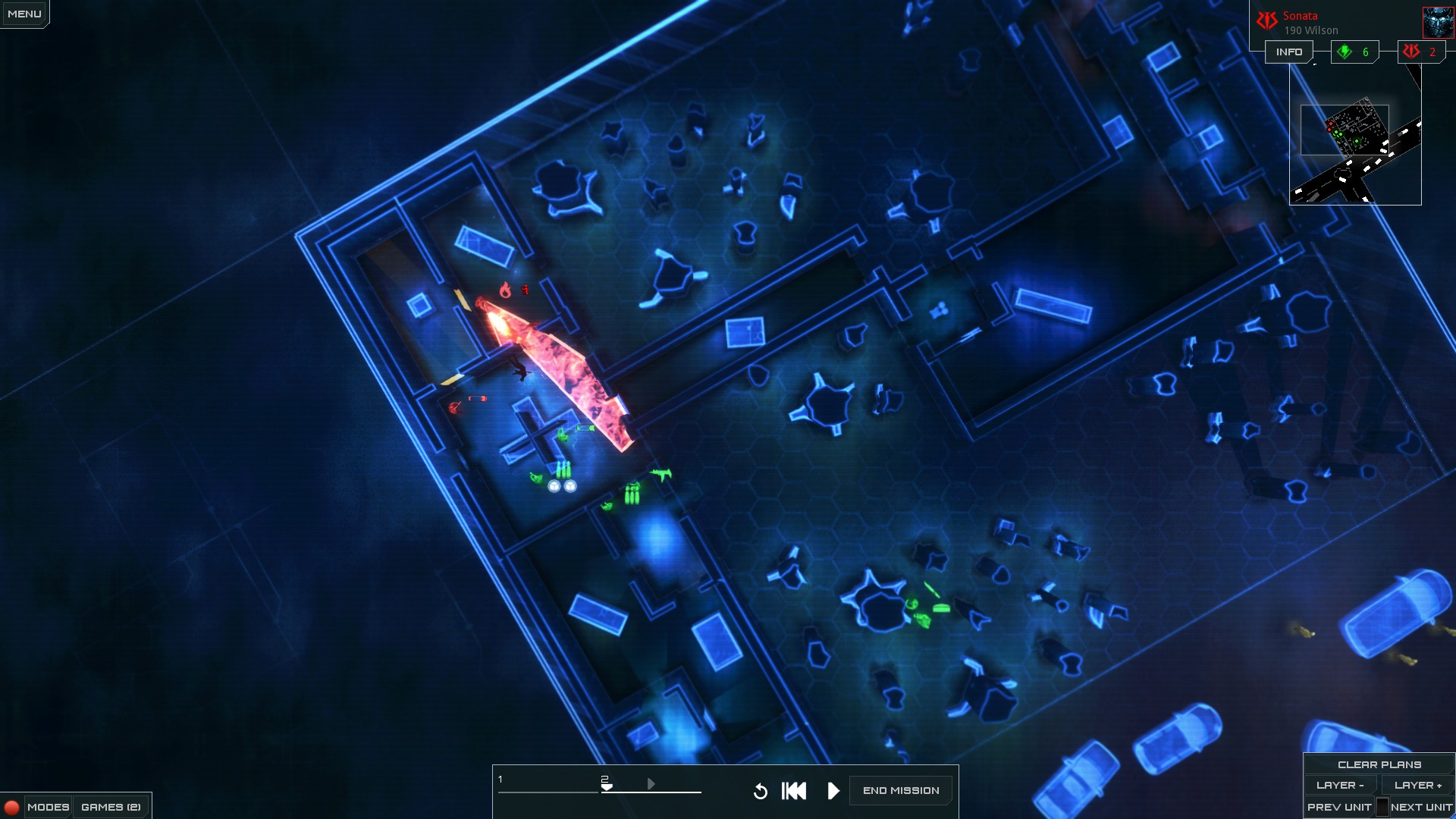 Any issues with technology? Of course! It’s a cyberpunk game, hohoho. A few hours in, I was tempted to make a grandiose statement like “The game is infested by a legion of malevolent spiders that hate your free time” but truthfully, it’s just a bit buggy. It crashed on me a fair few times, but autosaved frequently enough that I never lost any progress. Sometimes my ability to click waypoints on the map was cruelly taken from me, and I had to either use the right-click menu or restart the game. Bit inconvenient. Nothing earth shattering. A patch came in a couple of days ago that made things a lot better, too. Not perfect by any means, but given the improvement over just the last few days, I’m hoping any remaining issues won’t be there for long.

I’ve listed a lot of niggling complaints with Frozen Synapse 2, but that’s mainly because there’s honestly not that many ways to say how fantastic in both premise and execution its core concept is, and how well its game modes showcase it. It’s still very much an involved strategy game, and not one that transcends its genre enough to convert players with perpetually itchy feet and twitchy thumbs. If painstakingly planning out breaches down to the literal tenth of a second doesn’t appeal to you, you’ll want to look elsewhere. For all you really cool strategy fans, though, fill your cyberpunk boots.