I have a lot of clicky little games on my phone, and one of them is called Globesweeper, which I got after John (RPS in peace) raved about it at some length. It's Minesweeper, right, but instead of squares there are hexagons, which tessellate into a 3D sphere. It is very good, and after a few games to get my eye in, I can play it on total autopilot, phased out and thinking about other things.

Now we have a sequel, in the form of Globesweeper: Hex Puzzler. It is more difficult. There's no autopilot here. Indeed, to play it, I had to imagine I was some sort of a genius spy science wizard. A cross between Bond and M, but like, not one of the rubbish Bonds. Timothy Dalton in License To Kill. Corr, he was a savage, wunee? Oh, and a wizard. I dunno, Gandalf? [pls try harder at wizards Alice - Ed] Anyway, when I played Hex Puzzler, I was Jams Bront, the ultracompetent spy who has a phD and also a flowing white beard.

I am a fidgety person. I bite my nails, and I love those USB drives with magnetic lids, because I can open and close and spin them all day. I have dropped those lids in cups of tea many times because of this. I also flip through stacks of sticky notes (instructions: hold the stack between thumb and ring finger, loose ends to thumb. Brace index finger against bottom of stack. Flip through sticky notes with thumb. Repeat ad nauseum). What I am saying is: do not lend me a pen. Despite these tendencies, the original Globesweeper quietened my mind, so I could sit playing it in an absent, dreamy state, just counting and tapping numbers.

Like in Minesweeper, you have to flag up tiles that contain bombs, using the numbers on the safe tiles to find them (e.g. a hexagon that says 3 is touching three mines). Cool. Standard. But Hex Puzzler introduces new things. Further puzzles within the puzzles. The spheres have holes in them now, for example, so the puzzles are all different shapes. Sometimes they're seemingly random, sometimes they're cool geographic things. One is in the shape of the world. Jams Bront cleared Africa in no time, but found that Australia was a git.

On top of that, there are complicated extra logic type bits. There are things called line puzzles, where two red hexagons will be connected by a line across the puzzle, with a specified number of bombs between them. If the red tiles say '4', there will be four danger tiles somewhere along the straight line between them. Area puzzles, by contrast specify a certain number of dangerous tiles in a given area. There are things called chains, which are (perhaps unsurprisingly) groups of bombs lined up in a chain. 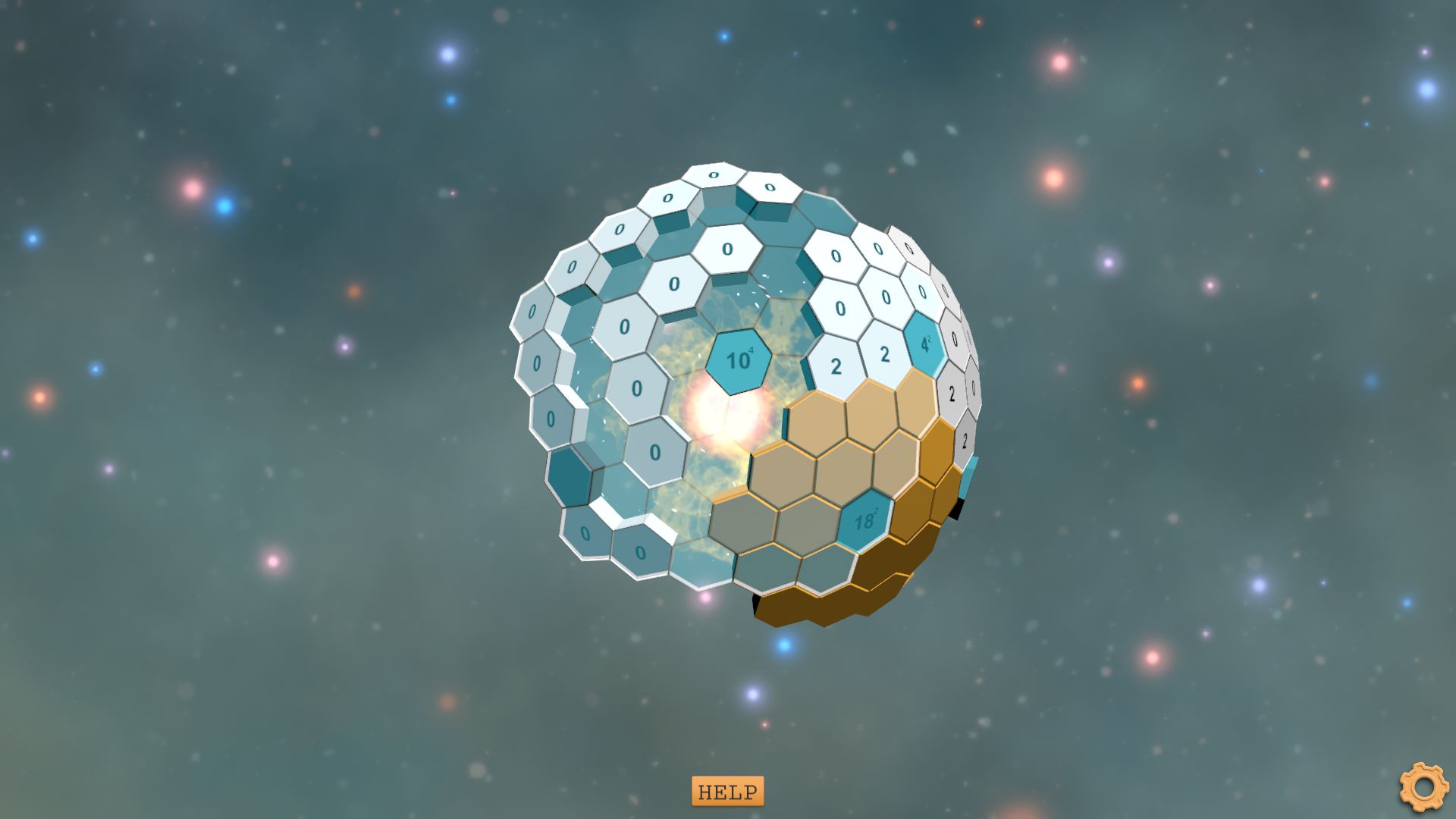 The 92 levels are all handcrafted, which means at no point will you have to guess your next move. You will always be able to logic it out. This is admirable, and frustrating, but in a satisfying way - it's nothing Jams Bront can't handle. It's certainly a nice step over the biggest flaw of Globesweeper Snr., which was its procedural generation. While it meant you could play it forever, it did mean frequently having to resort to pot-luck stabs in the dark.

The other cool thing about Hex Puzzler is that the center of each sphere is a glowing ball. It is like the nucleus of an atom, which would make the hexagons floating around it the angry little protons and electrons. Sometimes the shape of the puzzles are, I think, very much playing into that imagery. Jams Bront, then, has infiltrated a Soviet-era doom-science facility and discovered that world ending shenanigans are afoot. Luckily Jams has that phD, and magic powers, so he is able to perform sub-atomic surgery with a powerful, sorcerous microscope and a teeny tiny laser. And he's got to... um... heal the atom thing, excising its poorly electrons before everything bursts. 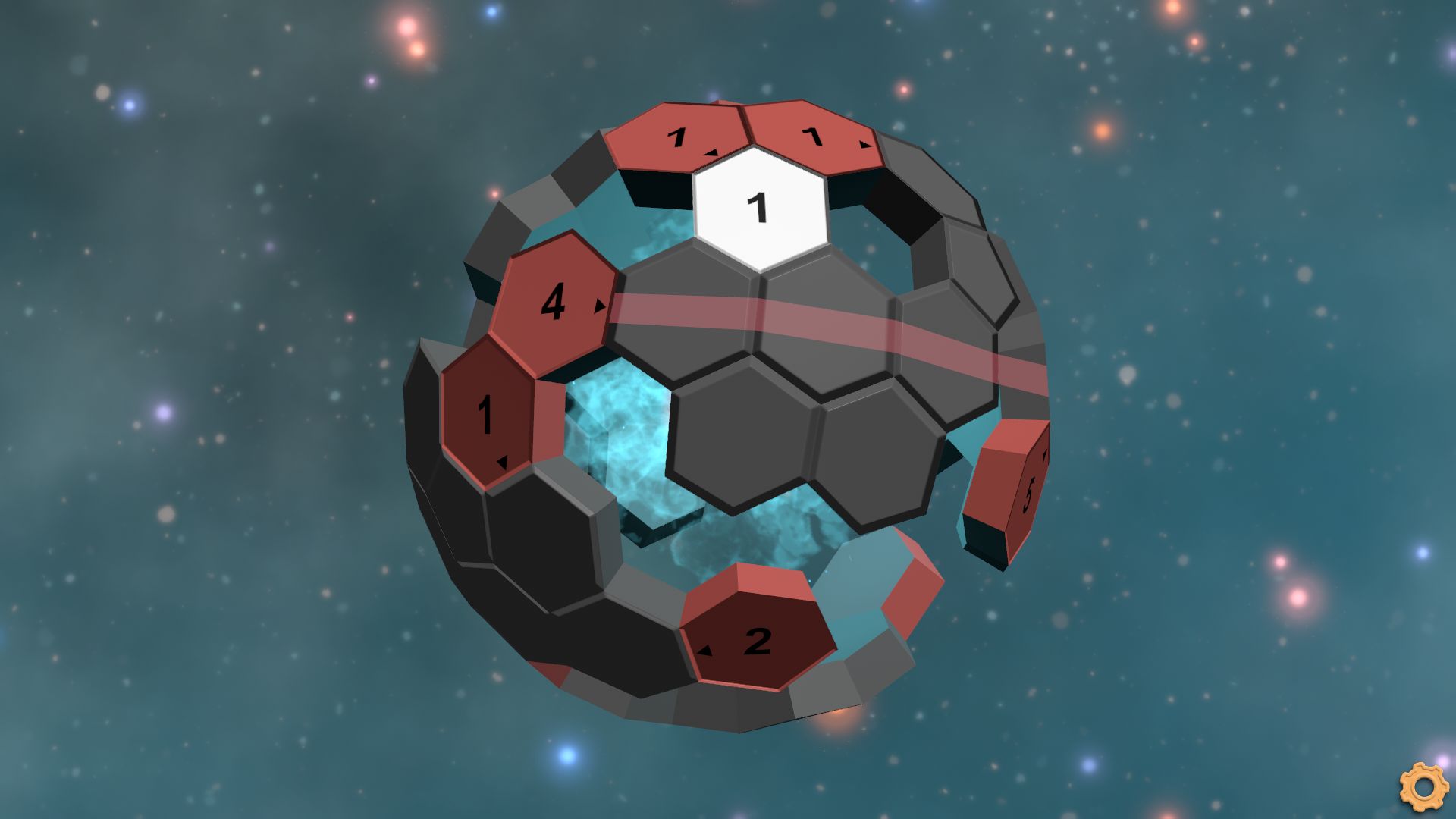 Fittingly, the soundtrack is a bleepy bloopy sience thing too, like something you'd use to soothe a baby Oppenheimer. And every time I balls up, the game makes a noise like ordnance kablooming just over a hillside, or Zeus after a bad curry. The nucleus darkens from blue, through yellow and finally red, becoming more unstable and arcing little bolts of electricity. Good god, Jams, this is getting tense. Wipe the sweat from your brow, dammit!

If you make too many mistakes (six) then the hexagons begin to fall into the centre and disappear into a black hole, meaning Jams has mere moments to get out of there and inform the President that he's done a booboo.

As you can see, it turned out to be a very effective and involving fantasy. And a good puzzle game. Thumbs up.