Minesweeper is a terrible puzzle game. It's not a terrible game! But it's a terrible puzzle game. Because Minesweeper involves guessing, and that's fundamentally bad puzzle design. Whether you enjoy playing it comes down to how you approach it. If you're someone who enjoys methodically solving complicated puzzles using learned techniques (hello!) then Minesweeper is the worst. If you're someone who loves reaching a certain point where all you can do is blindly click and hope, then it offers the thrill of chance. We all should learn to live in peace and harmony. (But when we do eventually go to war, I know which side is going to win. Hint: it's the side that doesn't randomly jump on places where their might be bombs.)

Globesweeper manages to muddle this issue even further, taking the Minesweeper format and placing it a on sphere. Which, it turns out, really reduces the need for guessing, but doesn't eliminate it. That is, until you find the extraordinary triangular mode.

Just in case, in Minesweeper you eliminate tiles and mark others as bombs, based on number hints. If a tile has a 2 in it, that means that of the eight surrounding eight tiles, two will have bombs. So if you've already two marked, you can safely eliminate the other six. And so on. Until you reach a point where the information gives you no direction, and you have to squeeze your cheeks and click at random into the fray.

So clearly I've a bias when it comes to Minesweeper-likes. It's not my cup of tea to combine methodology with guessing. If it's yours, then this is an easy recommendation: it's the same idea, but on a sphere. (Catchy radio jingle there, yours for free.) 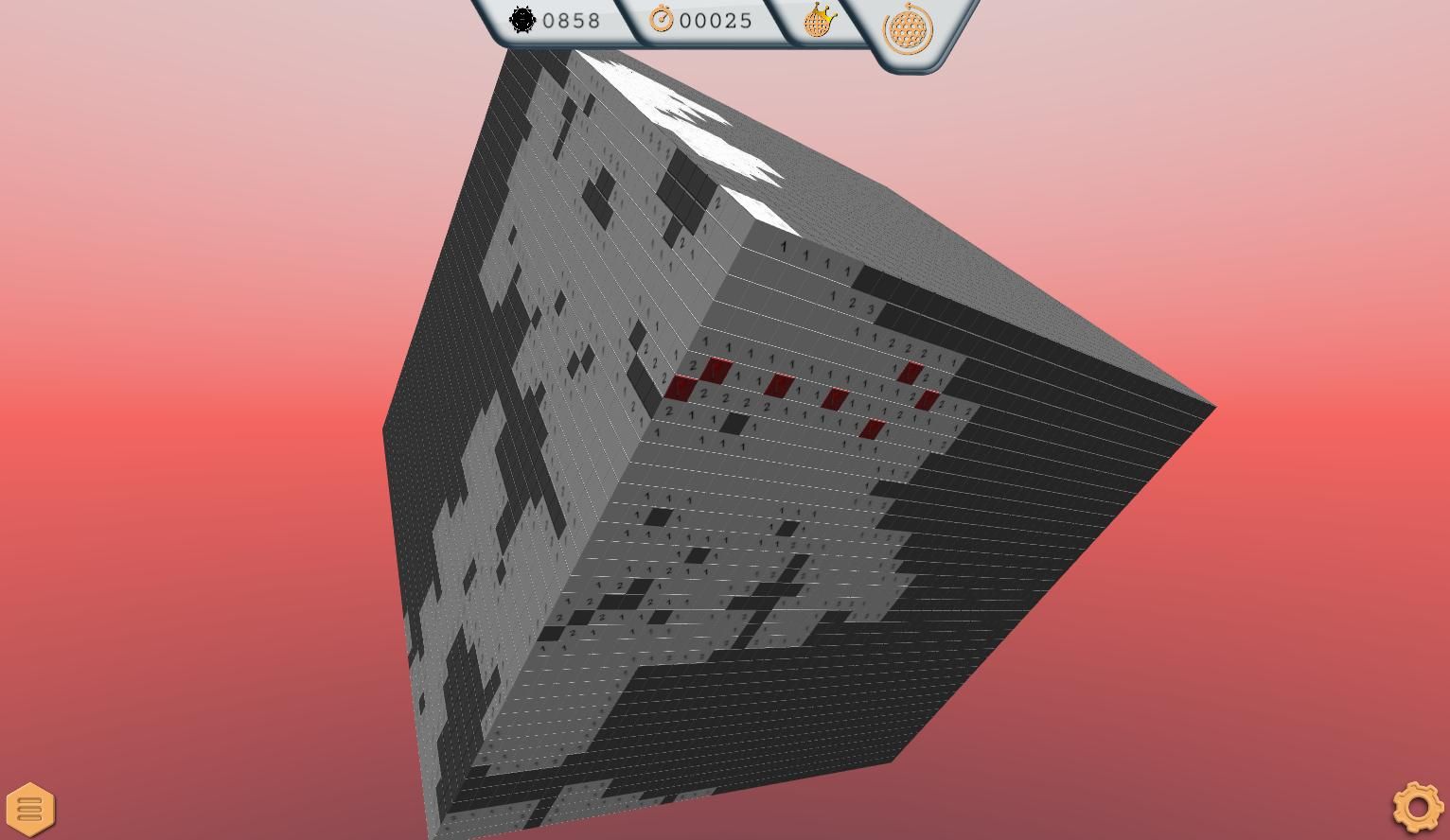 Being spherical removes the edges, which developer Kenneth Ward (LogicBots) points out eliminates a lot of the guessing. There's information surrounding all sides of every tile, so you're much more likely to be informed about any given space. In fact, he says that in the game's default mode, hexagons, a guess is only necessary every two to three games. I may have been unlucky, as my first two goes both required a fair few.

But then! But then I looked at the options, and found the other modes. Turning the whole thing into a cube made of square tiles is quite the thing, as the rules apply over the edges, making for a very different feel. Still guessing, but much less than a standard Minesweeper grid. And then I tried triangles. And ooooh wow. I've got a new puzzle game to play! 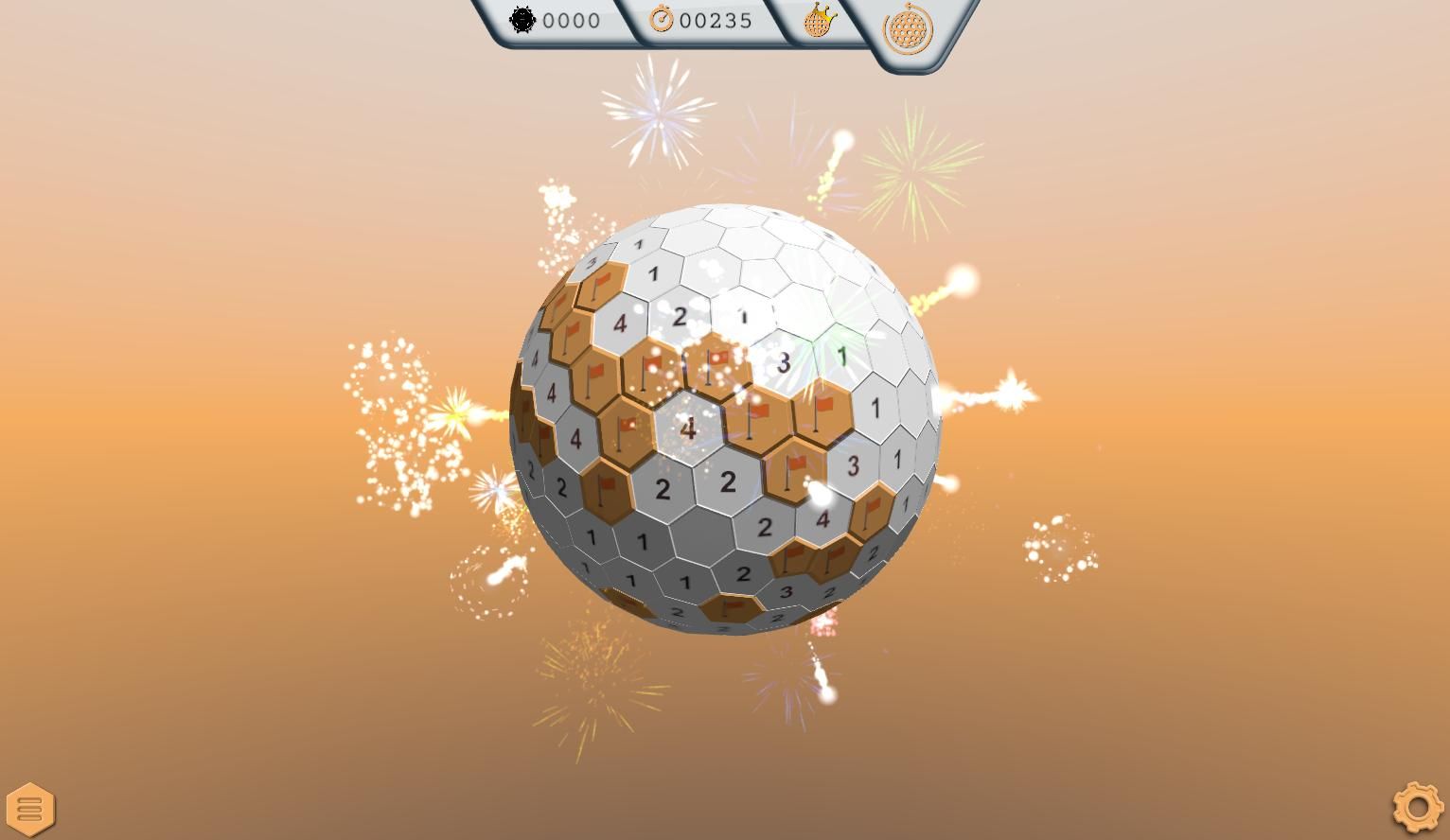 Each triangular tile is affected by the twelve surrounding it, both by edges and corners. Just getting your head around this alone is quite the thing. Then, there's enough information to start making informed choices. But with what the snooty types call, "advance techniques".

I'm a big fan of Fill-A-Pix. A puzzle primarily pushed by Conceptis, it's the puzzle I'm most likely to be playing on my phone at any given time just now, and have spent a considerable amount on extra puzzle packs for it. (They add new packs every week, which is quite the thing.)

These work on a principle similar to Minesweeper, except for the key difference that the numbered cell in any given square of nine is also included in the count. (Does that make sense? In Minesweeper, the "2" means it's touching two others. In Fill-A-Pix, the tile with the "2" is inclusive, it could be one of the marked tiles itself.) And this transforms everything. It switches from a game dependent upon random luck, to one that can require advanced techniques (sorry) where you're analysing the grid for and 8 and a 1 separated by an L-shaped knight's chess move, or an adjacent 6 and 3, and so on. A single 20x30 Advanced puzzle can take me over an hour to solve. Oh, and crucially, in Fill-A-Pix the grid is already completely revealed at the start.

Triangle mode manages the same, but with the added element of concealing its grid, and in a way that makes me scrunch up my eyes with the effort of trying to balance the information of overlapping 12-sided triangle patterns, as I establish that if this 2 and that 3 are there, then they will both have to mark in this area here, so that 1 will be affected no matter which of them they use, so I can eliminate all the others around that 1 unaffected... But in a sphere. Happy John!

Guessing is still a possibility, I'm told, but it's clearly far more rare here, and I'm having a splendid time scouring the spheres for the next tiny detail that lets me crack it open. 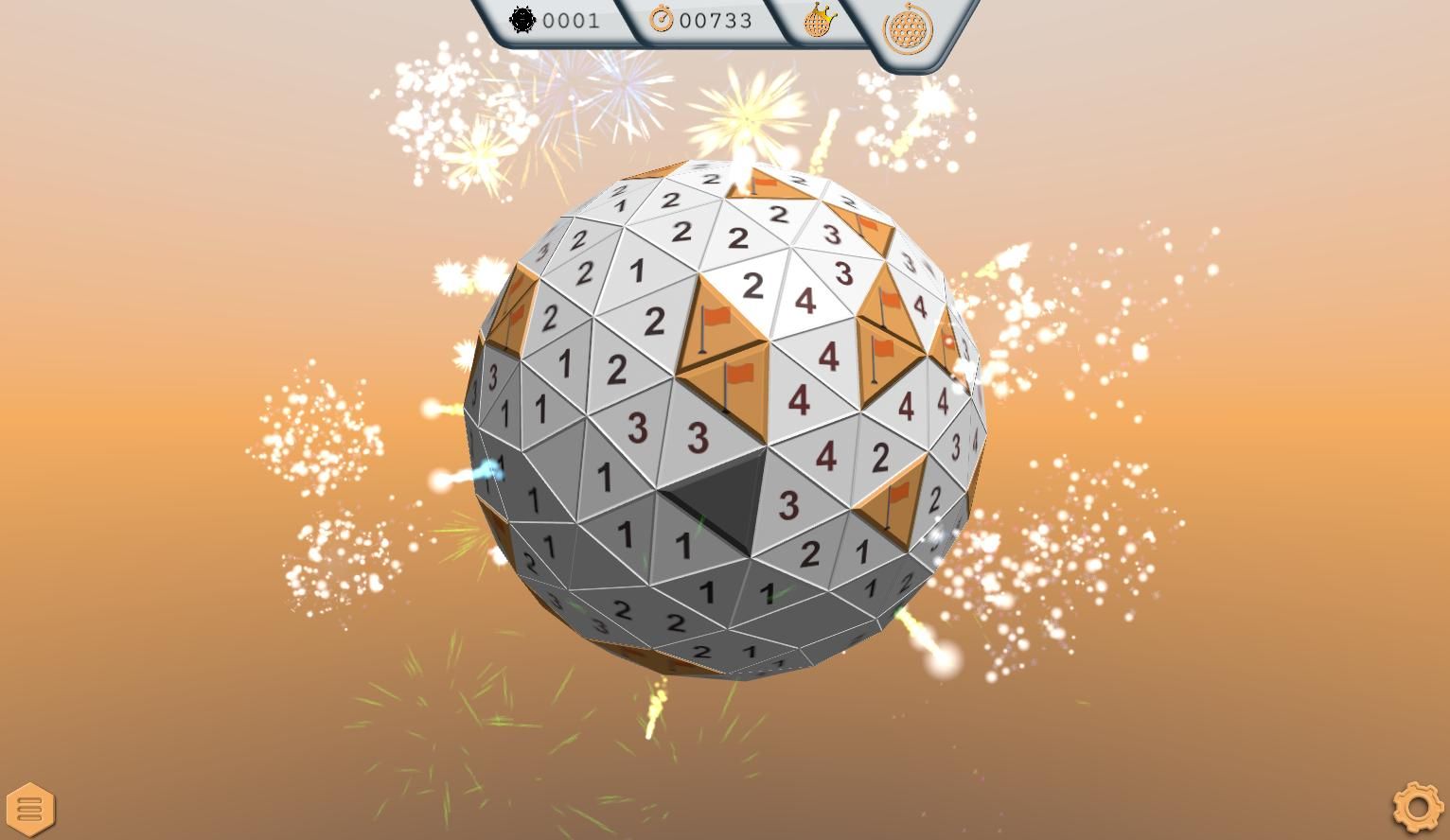 There are a good few options for sphere sizes and mine density, to tweak the game to your preferred state, alongside the three modes. And you can skin those spheres various colours, or indeed to look like Earth, Mars or the Moon. Which is to say, yes, losing game means BLOWING UP THE MOON.

For less than a couple of quid, this is well worth it. Randomly generated puzzles, so you won't run out, plenty of options, and that bonkers triangle mode for a real head-scratcher.