If you click on a link and make a purchase we may receive a small commission. Read our editorial policy.
Developer: Creepy Jar
Publisher: Creepy Jar

A couple arrives in the Amazonian rainforest, you the man, she the lady, as part of a continued effort to form relationships with a recently discovered tribe. It seems you wrote a book about this tribe, which led to some issues with governmental agencies messing up and causing bad blood. This return trip is a low-key attempt to mend the damage. Which is, without question, a far more interesting beginning than "a plane crash". It also means it justifies a lot of the fancy equipment with which you begin, rather than having your craft a satnav out of straw, or however it usually goes. Yet it's fair to say, Green Hell's originality doesn't extend much beyond this. 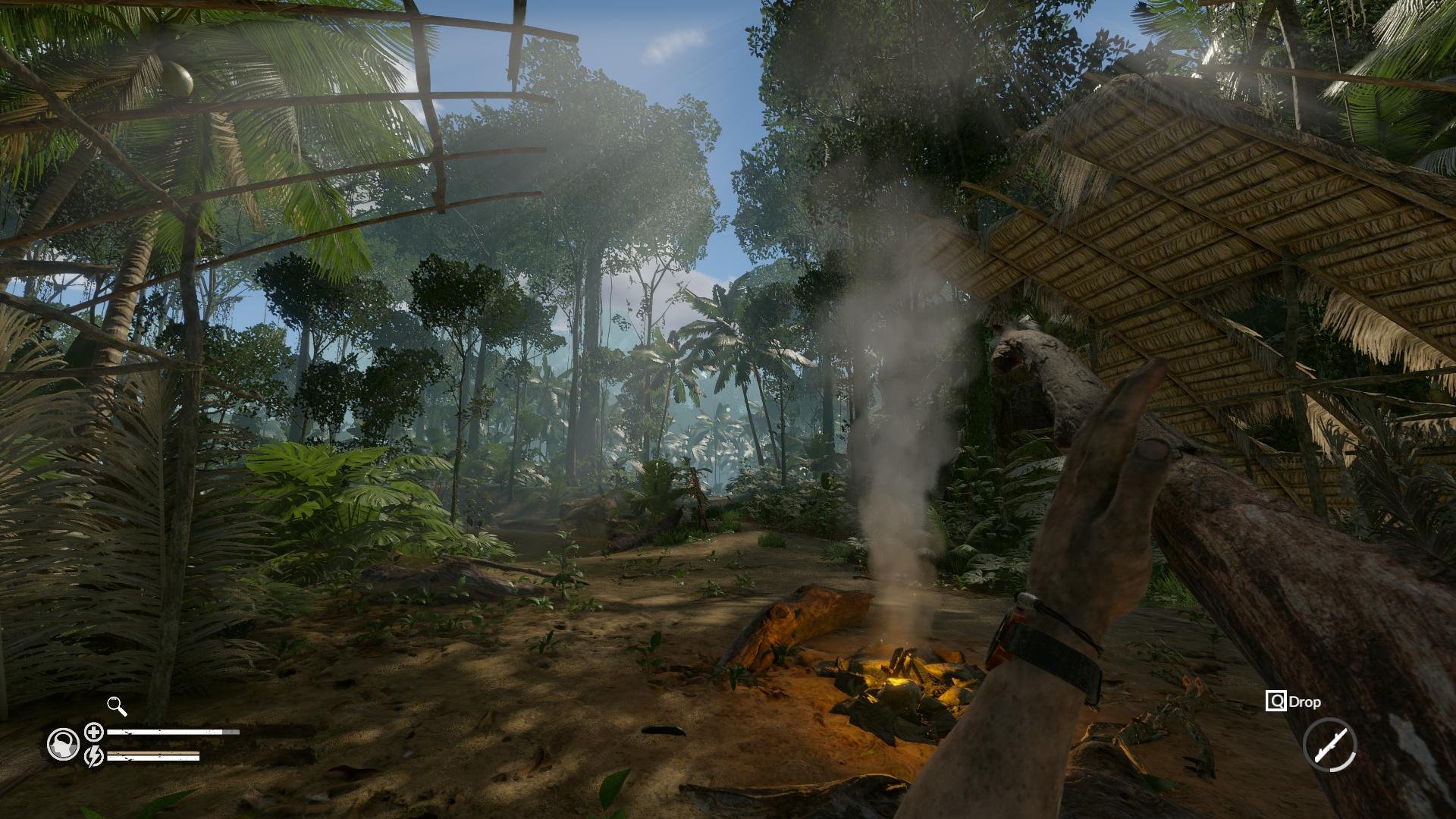 Yes, this absolutely is yet another survival-craft-me-do, and yes, it certainly does lean heavily on the work of its forefathers. With a very hefty dose of The Forest, plus sprinklings from many others, its curveball influence is Firewatch. That's evidenced from the opening moments, in which your character, Jake Higgins, communicates with his partner Mia via walkie-talkie. Hold down F to choose which reply you want to give, and listen to them banter. And heck, great, if you're going to liberally borrow ideas from a clutch of other games, for goodness sakes take some really good ones other people have failed to replicate.

But in the main, it's The Forest But Where The Forest Is The Jungle. (Which presumably was their second worst choice for a name, after the conundrum that is "Green Hell". I mean, I get that it's literal, a green hellish place, but is it meant to be a pun on something I'm not getting? Having given this some thought, I'm now incapable of thinking of it as anything but "Green Hell Zone" and imagining gold rings everywhere.) So just like The Forest, you chop down trees, then whack at the logs with a machete (instead of an axe) to get sticks. Crafting objects in the world is done by dragging diagrams of them out of your notebook and placing a ghost on the ground, then filling it in with the necessary items. Crafting inventory objects is done by pulling them from your backpack onto a mat, and then clicking when you've enough ingredients. All verbatim from Endnight's successful early alpha graduate. And that's all fine, that's how these genres build and develop. 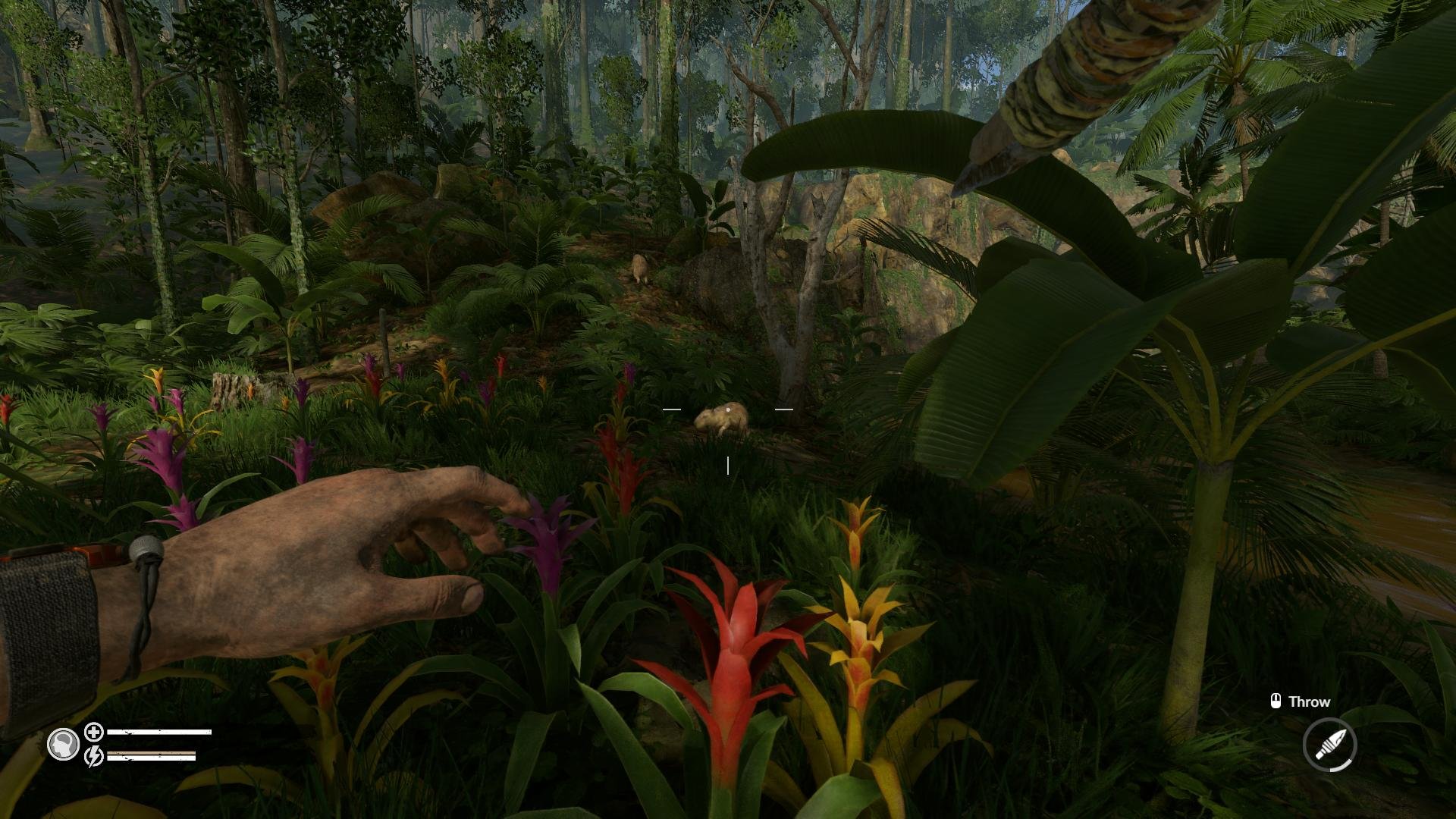 And develop it attempts. Rather than reinventing the wheel, it instead adds a few more onto the chassis. Radial wheels, mostly, the best of which is a body inspection mode where you can look at each of your four limbs in turn to try to find any injuries you might have sustained. (Sure, this is a wildly daft conceit, as locating injuries is more usually achieved by following the pain, but since we can't feel his pain it's a nice enough fiction.) Rather than being done in a menu, this has our chap physically inspect his arms and legs from his first-person perspective. Find a wound, and you'll need to do something about it, which will likely involve crafting some sort of bandage or potion from the flora around you.

Its other big inclusion to the genre is a psychological state doodah. A battle to stay sane in the trying conditions of jungle survivalism. Now, other survivals have included fear as a factor, and Don't Starve has a sanity meter, but it seems like Green Hell wants to push this a bit further, make it all a bit more complicated. It's probably worth also noting that the jungle doesn't appear to be procedurally generated, so you can get to learn your way around, with items all spawning in the same places. 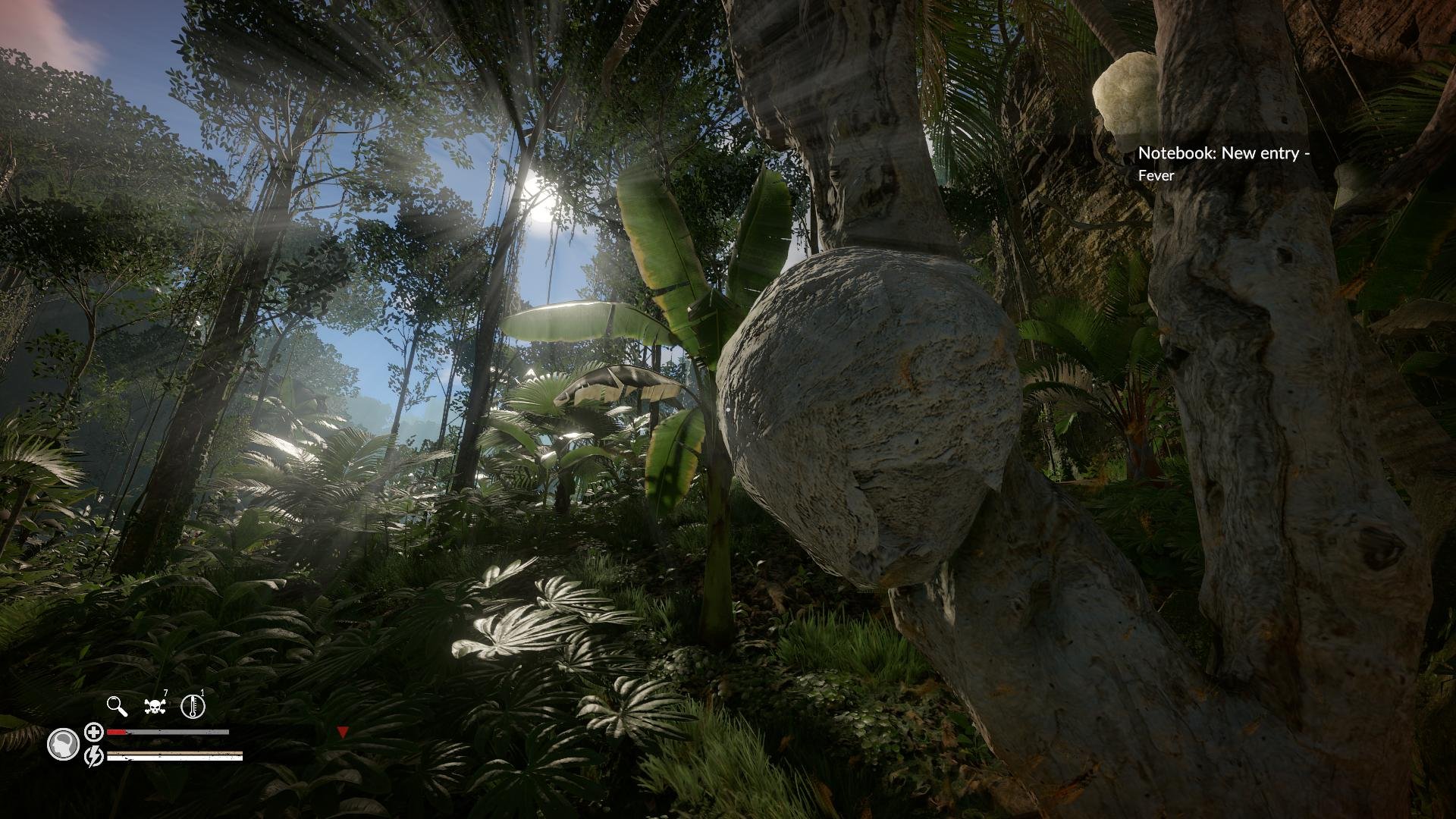 The story mode that's included in this build is described as a "tutorial". Lasting about half an hour, while it introduces the basics of crafting for sure, its real focus is on telling you the opening of its story. Which is rather tantalising, and then somewhat anticlimactic when it ends by dumping you in the middle of nowhere, without your tent, beds, radios and most of all, company, and strips away all the items you'd gathered so far. Reducing itself down to, well, every other survival game.

And that's fine too! I love me some survival games. But this one, without its story, as yet really doesn't stand out. On "Normal" it's tiresomely difficult, your character insatiably thirsty despite drinking incessantly, fires almost impossible to light once there isn't a script on your side, with too much piling on at once. On "Easy" it's slightly less frustrating, but still outlandishly naggy. 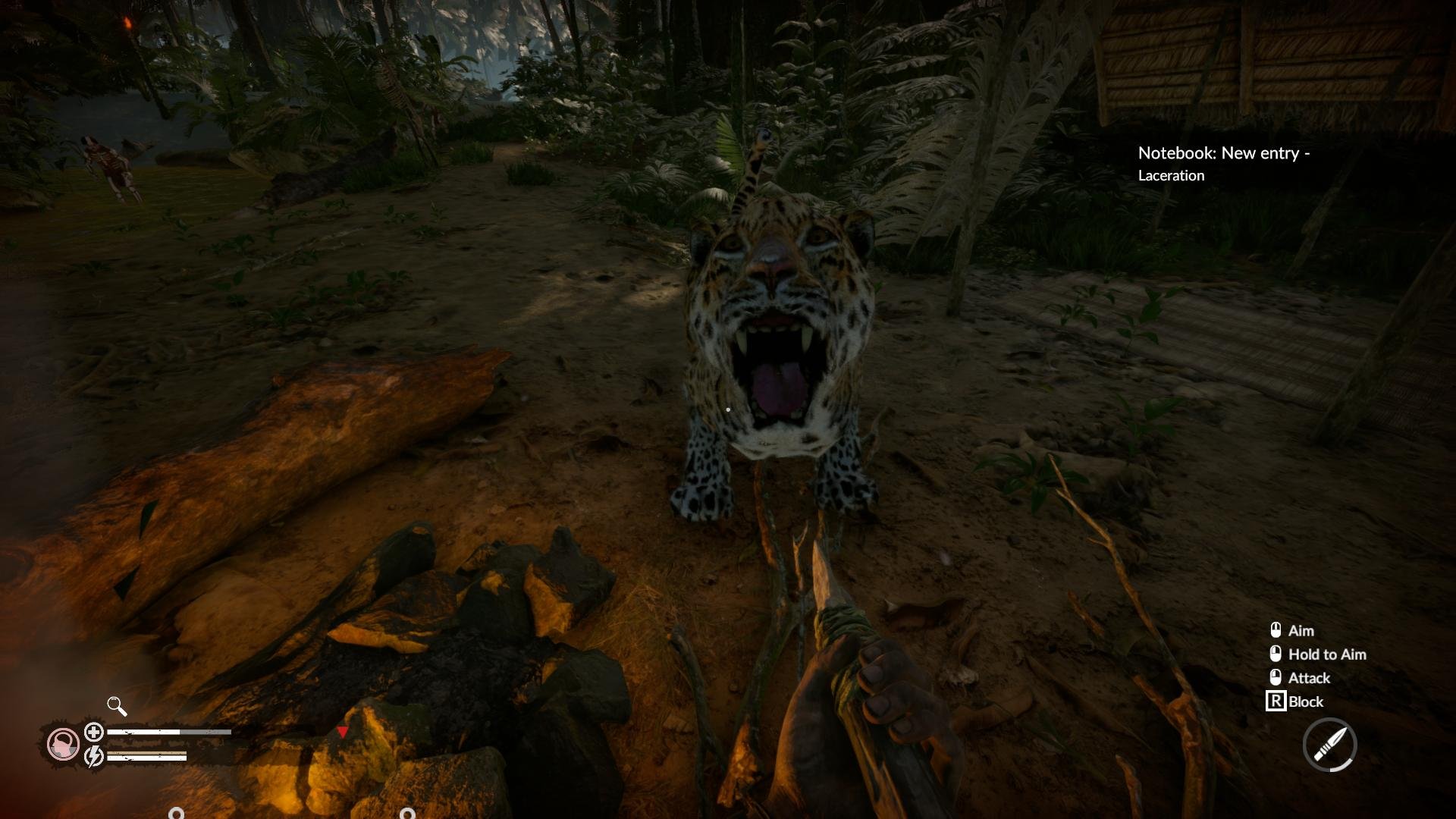 I think, were it to be more welcoming at its start (I had hoped the days of brutally hard only survival games were over, with developers now recognising that encouraging players rather than putting them off is perhaps a better business model), it could have grabbed me. I love that there's a cave to find almost straight away, that sense of a home and safety it offers, and a base from which to begin working out how to survive. But instead I just felt pummelled by accelerated time, ridiculous thirst, and axes breaking after being used once.

Within seconds of starting one attempt, I was bitten by a snake, then by a scorpion, and finally killed by a swarm of bees. Literally two minutes. It was funny, at least. But not an entirely great gaming experience. Another try seemed to be going a lot better, and I'd managed to get a fire going, started collecting items for shelter building, and even successfully speared a beastie for my tea. At which point a cheetah attacked me, accompanied by a sudden attack of face-painted tribesmen, and I was dead in half a second. (I got the cheetah though!)

Also, the sanity thing is on the same lunatic meter as thirst, your sanity level dropping at the slightest issue. Get a leech on your leg? "Sanity -2". Fail to get a fire going? "Sanity -4". It plummets at any and everything, far too fast, and results in an apparent form of schizophrenia as you start hearing berating voices in your head telling you of your worthlessness. Ew. This is occasionally impressively contextual - at one point I was aiming to spear a pig-thing, and the voices told me I'd miss. I didn't, so fuck you, voices. But still, I suspect going mad in the jungle might take more than half an hour. For crying out loud. 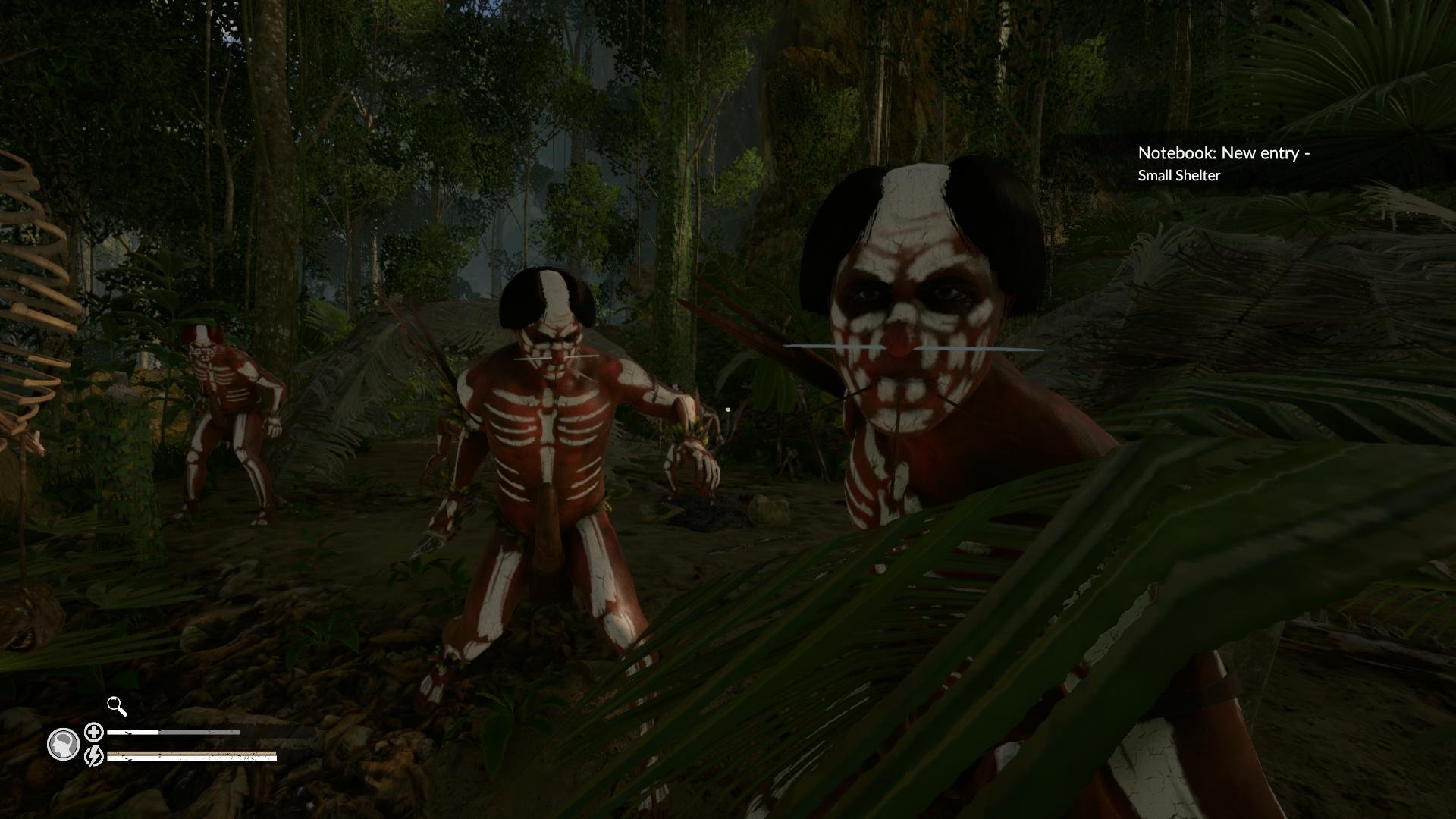 When the game is so similar to so many that came before, it has some odd holes. Like axes not being able to chop down trees of any thickness, while a sharp stone can chop down a sapling like, er, an axe. And being early access, it's impossible to know if this is by design, or because you're playing a half-finished game. (It's also enormously frustrating when it asks you to find some dry leaves, as you walk around a jungle floor carpeted in untouchable dry leaves, with a crappy 'walking in dry leaves' footstep noise, but hey, video games.)

Indeed, if I were to pick a bare minimum of what I expect from a for-sale product, it's working options. I expect that I should be able to rebind controls, at the very least. And here, I cannot. And yet more egregious in the game's opening seconds are the outrageously dreadful bird sounds. So cheap a sound effect are they that you can hear the pitch-shifting on the weirdly digital noise, as they robotically screech at a ridiculous volume over the dialogue. And sure, you could argue, this is an early access game and the SFX aren't in yet - does that matter? And I find myself pondering this yet again, thinking that, yeah, actually, I think it does. The game's on sale. 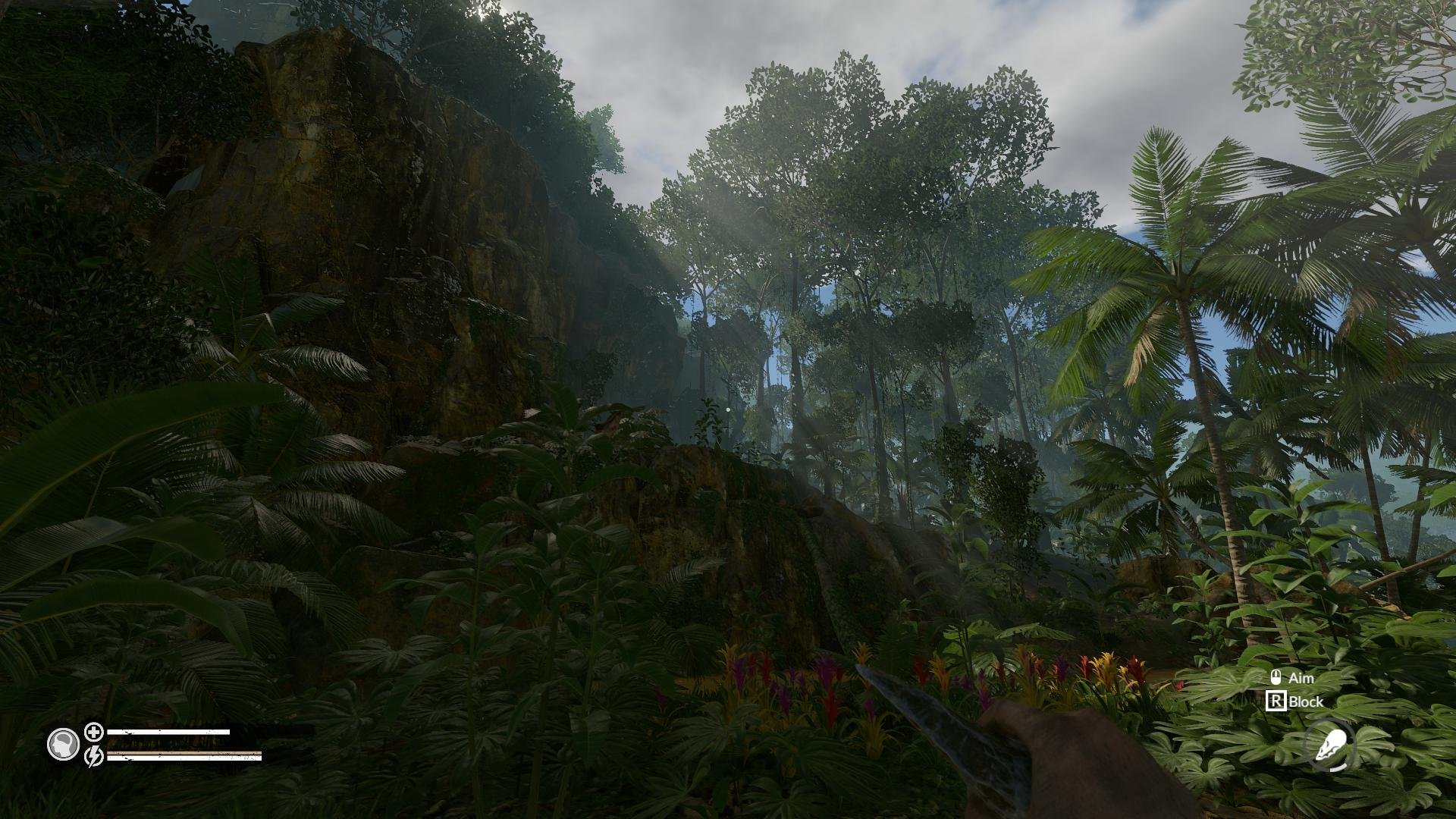 What's already sale-worthy is the art. It looks incredible, superbly detailed foliage, sun glinting through the treetops, a wide variety of plant types with unique properties, and, best of all, some stunning animals. Snakes, frogs, capybara, big cats, tiny fish... It's teeming with wildlife, and it all looks amazing. Sound, as I've already mentioned, not so much. The voiced dialogue is fine, but so much of the SFX I desperately hope are placeholder, because good grief.

And so I oscillate, between being really intrigued to play more of its story, ending on quite the introductory cliffhanger as it does, and frustrated to be yet again staring at the early stages of another survival game that'll probably be quite good in a couple of years. Part of me wants to keep picking away at it, learning its idiosyncrasies, figuring out how to overcome its lunatic challenges, and indeed its lunacy challenges. But part of me has done this too many times before, and thinks it'd far rather just wait for the game to be finished, and let someone else do the unpaid (indeed, paid for) beta testing.