Well, it's the 31st October, and if that means one thing, it means it's my little boy's birthday! Toby turns 4 today, so I thought I'd celebrate by putting together all the bizarre times he's contributed toward RPS.

Most of these posts were originally for Supporters, but in the spirit of Toby's Birthday Day, I've unlocked them all so they can be enjoyed by what I'm not afraid to call "the masses". 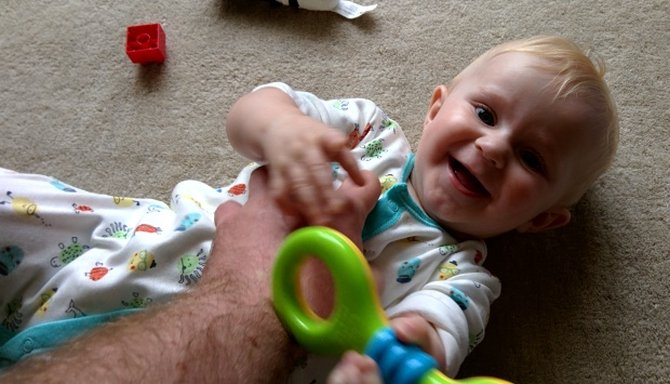 First came my reviewing Baby Games - as in the games I was playing with my son before he reached his first birthday.

Right, So, My Son Thinks Playing Games Is Work 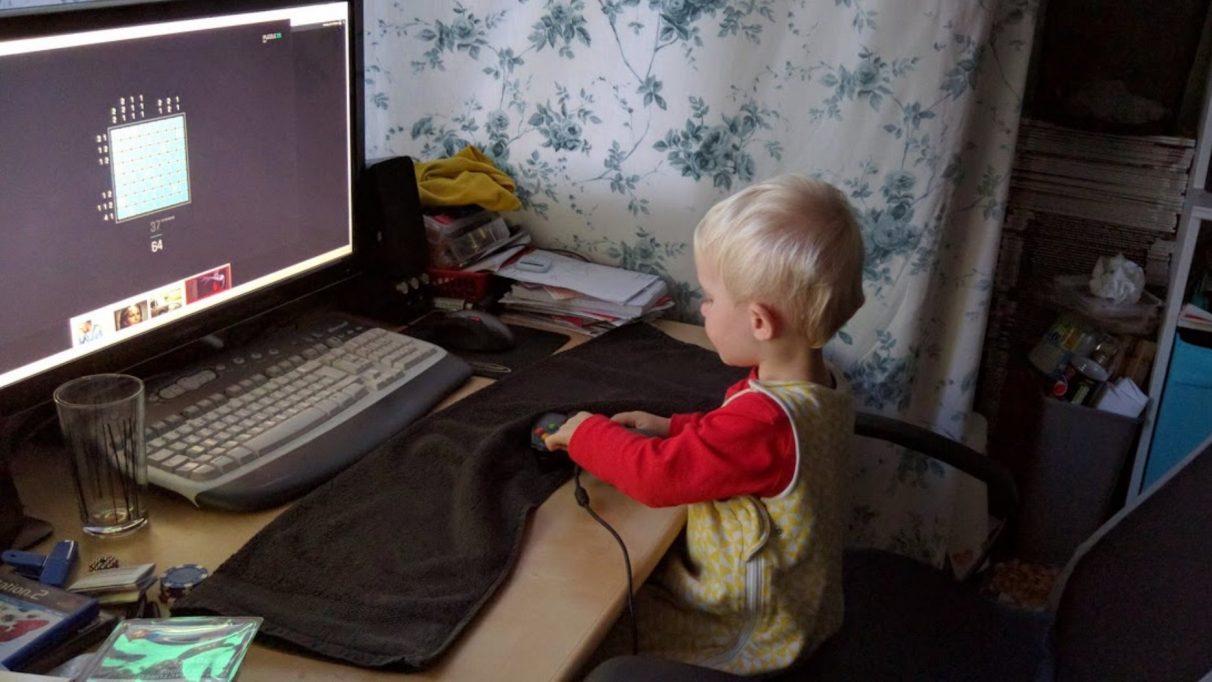 This one was from just before his second birthday, as his vocabulary had peculiarly accelerated a good six months ahead of where it should have been, and he made it clear that I'd already screwed him up.

Toby now, on seeing a game controller, will pick it up and declare, “Toby a-workin’.” Not “Toby a-workin’!” There’s no exclamation mark. It’s deadly serious. There’s “pah-layay” (playing), which involves cars and diggers, and there’s "workin’", which involves sitting in front of a PC monitor and driving a pretend car or digger. (My last two reviews were Giant Machines 2017 and Mafia III, for crying out loud.) There is no way this ends well.

Now on walking into my study, Toby immediately announces that it’s time for him to start working. Which means I have to lift him onto my lap and hand him the (disconnected) 360 controller. He “pess a butns” for me, while I surreptitiously control whatever’s happening on screen. This week that’s been the most terrifying experience of trying to play the increasingly horrible Mafia III without anything inappropriate appearing on screen. This means absolutely no dialogue, avoiding all fights, and basically trying to drive a car around the streets in the most law-abiding way possible. Fortunately he doesn’t know what traffic lights are/how they work yet, so I can get away with running those. But he very much understands zebra crossings (“stripah road, hold dadda HAND”) so I have to slow down or completely stop at every one of those. 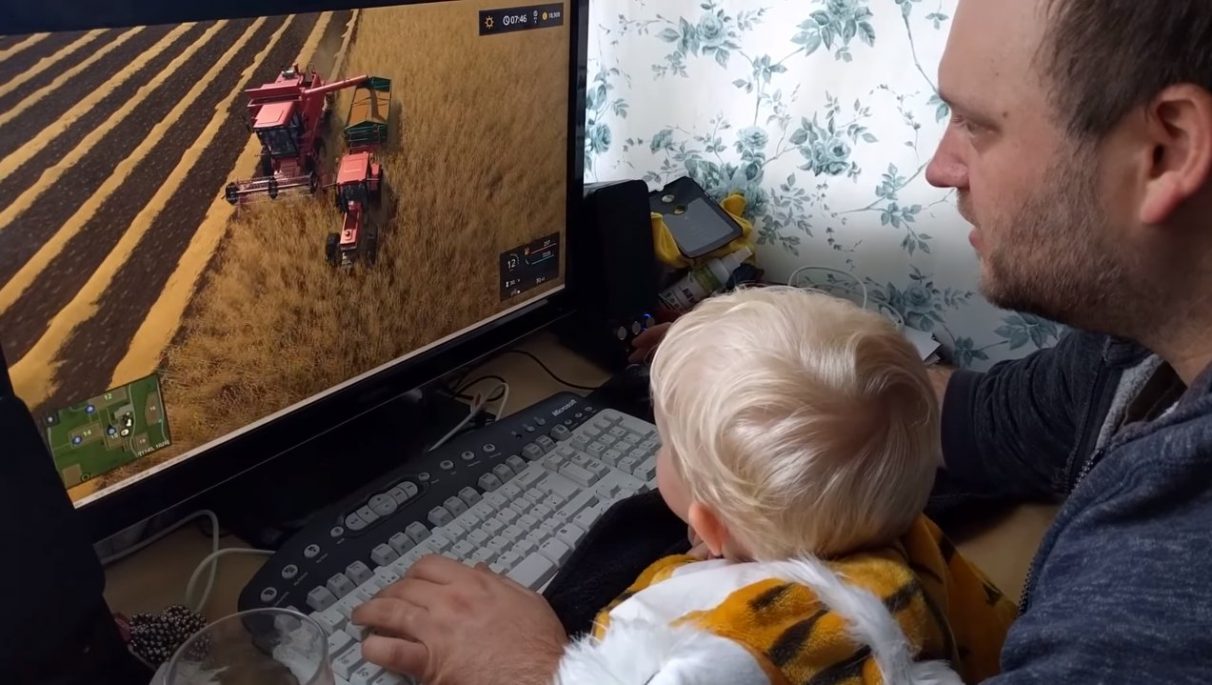 Having just turned 2, Toby then helped me review Farming Simulator 17, which I gave a title that in hindsight feels really odd considering. It turns out if you watch the video, it's my wife's fault.

We jump ahead a fair way now, to Toby at 3, where I recruited his help to write that week's Steam Charts. I showed him a screenshot from each game, asked him what it was called, and what it was about. And they just became facts. Which is why GTA V is now called "Flibble Glibble Pants".

Daddy: What’s this game all about?
Toby: DINOSAURS!
Daddy: Woooowww.
Toby: You fly around on pterodactyls!
Daddy: Oh my goodness! And how do you win?
Toby: Whoever spins pterodactyl around wins! And it’s called Pterodactyl Spinners!
Daddy: I can’t wait until all these games change their names! 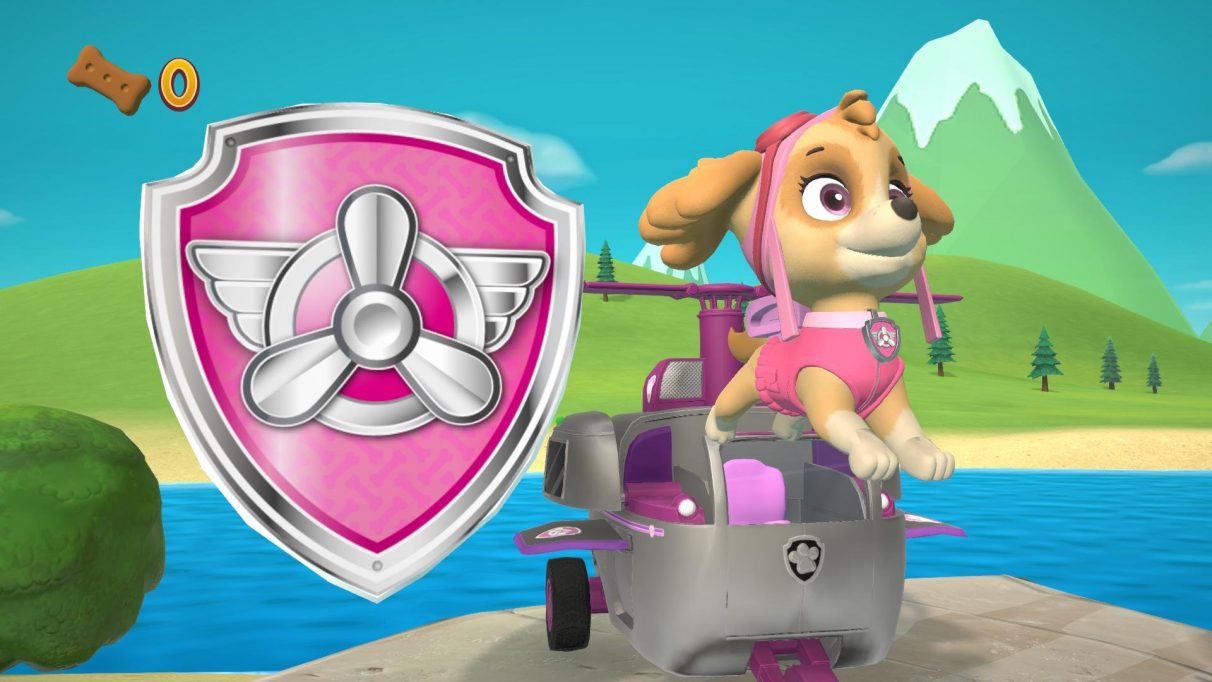 Which brings us to Toby's most recent contribution to the site: his review of Paw Patrol: On A Roll, in which he is entirely, objectively wrong.

Happy birthday, boy. And why not throw in a bunch more pics of he and I playing games together? 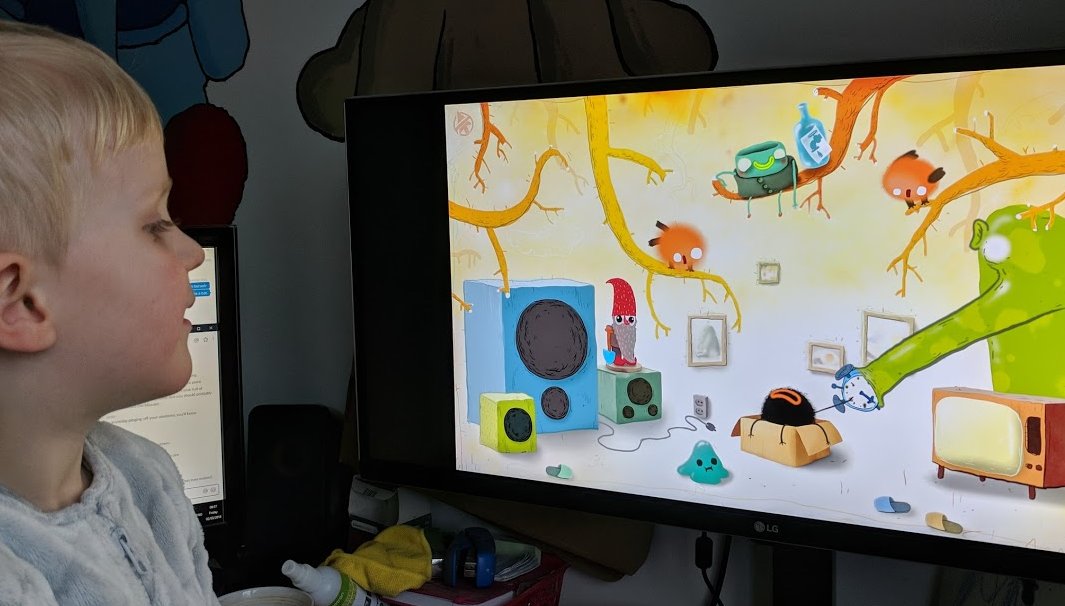 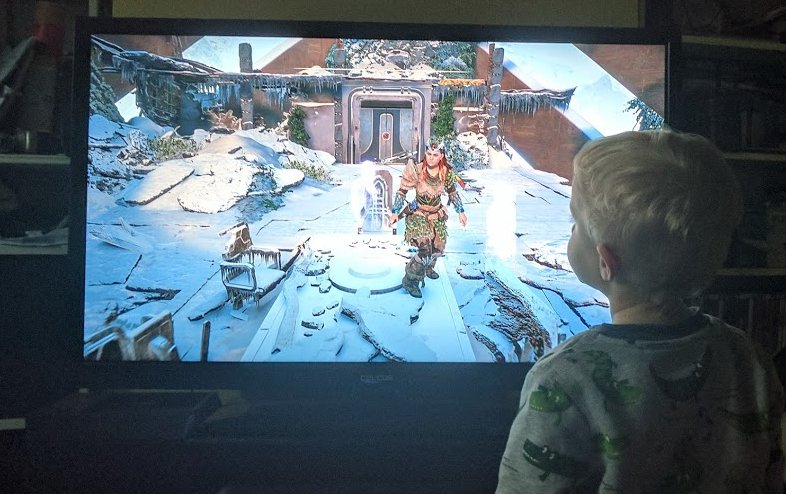 Some Game With A Plane In It 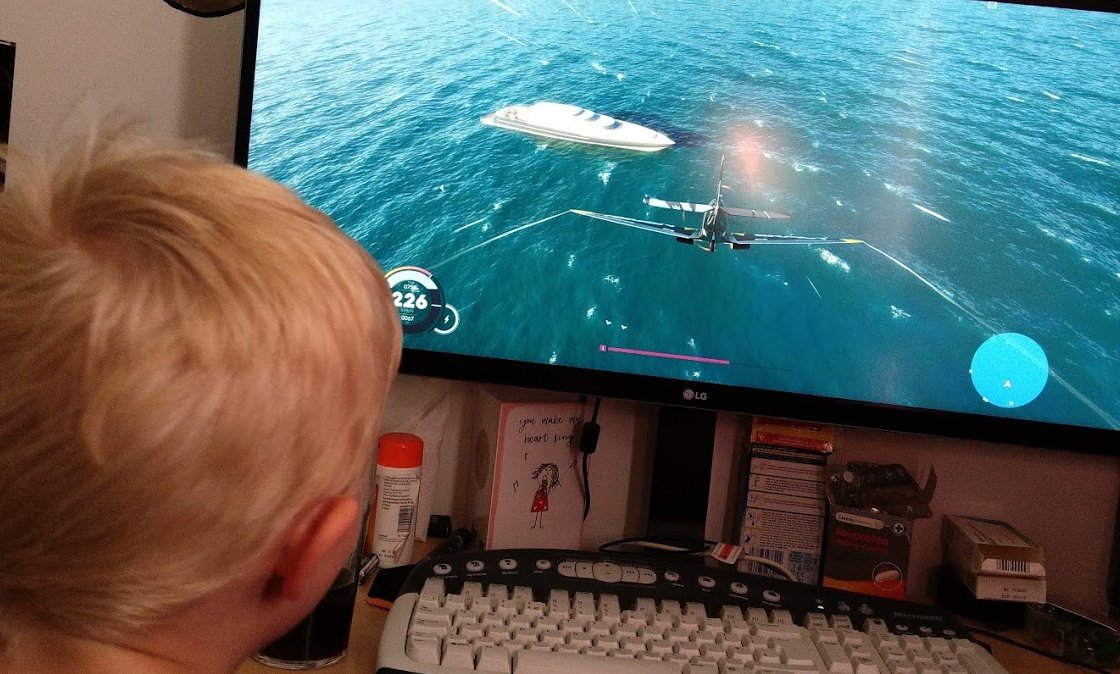 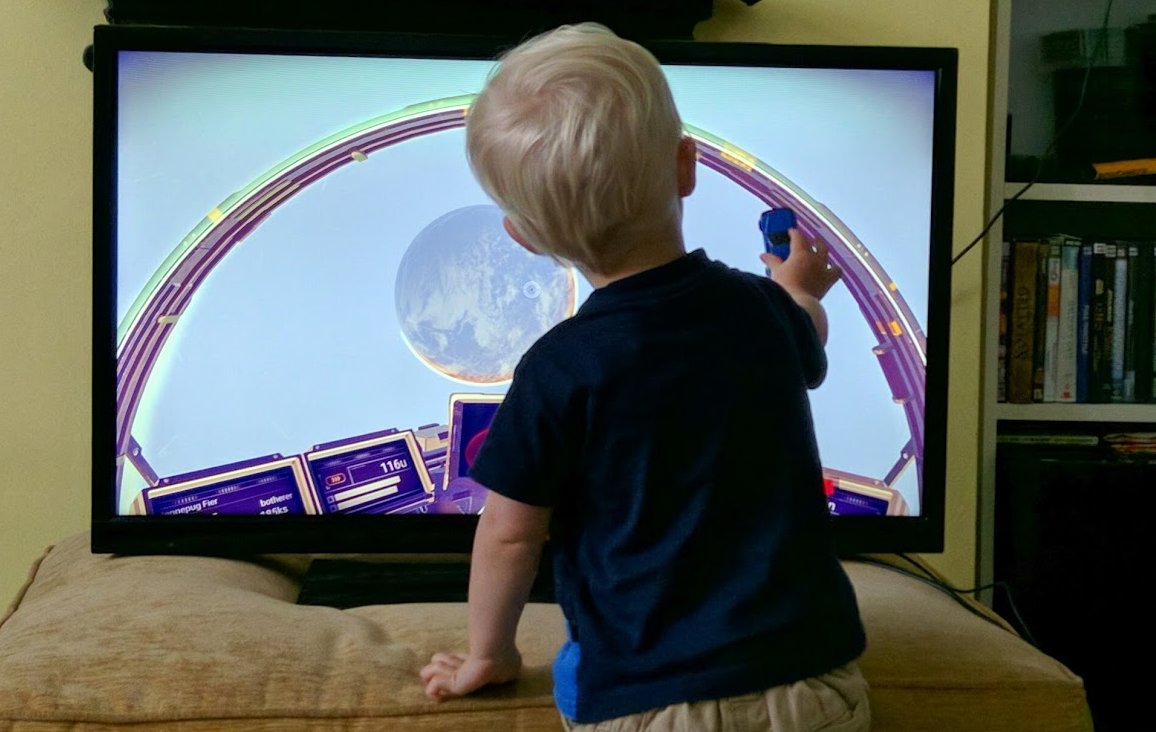