It was a rhetorical question. I know you haven't played BallHoops. If anyone apart from my brother and myself has ever played BallHoops, I'd happily eat the Poäng I'm sitting in.

That's because we invented the game only a few years back. Let me explain: there's a kid's park not too far from the family home where we'd often go as kids to play. Apparently we never outgrew that stage of our lives, mostly because we were great at coming up with games. A while back, the park was renovated, and the old red swing set we'd grown up with, the site of our previous game, BallSwing (perhaps I'll tell you about that game too one day) was replaced with the monstrosity pictured above.

But our disappointment at never again being able to play BallSwing was short-lived, as we quickly set about constructing a replacement game based on the new apparatus. One that was less strenuous than its predecessor, and, dare I say, more cerebral.

A game of BallHoops usually lasts maybe ten minutes, and is best played in heavy rain. And I mean really heavy; the kind that prevents you from being able to look up. That's important. You and your opponent stand a couple of metres away from the climbing frame on either side, and take it in turns to throw the ball through each of the sections numbered below. If it goes through and hits the ground, you move to the next hole - but the moment the ball leaves your hand, your opponent is free to move, and if they catch the ball then it prevents you from moving on. 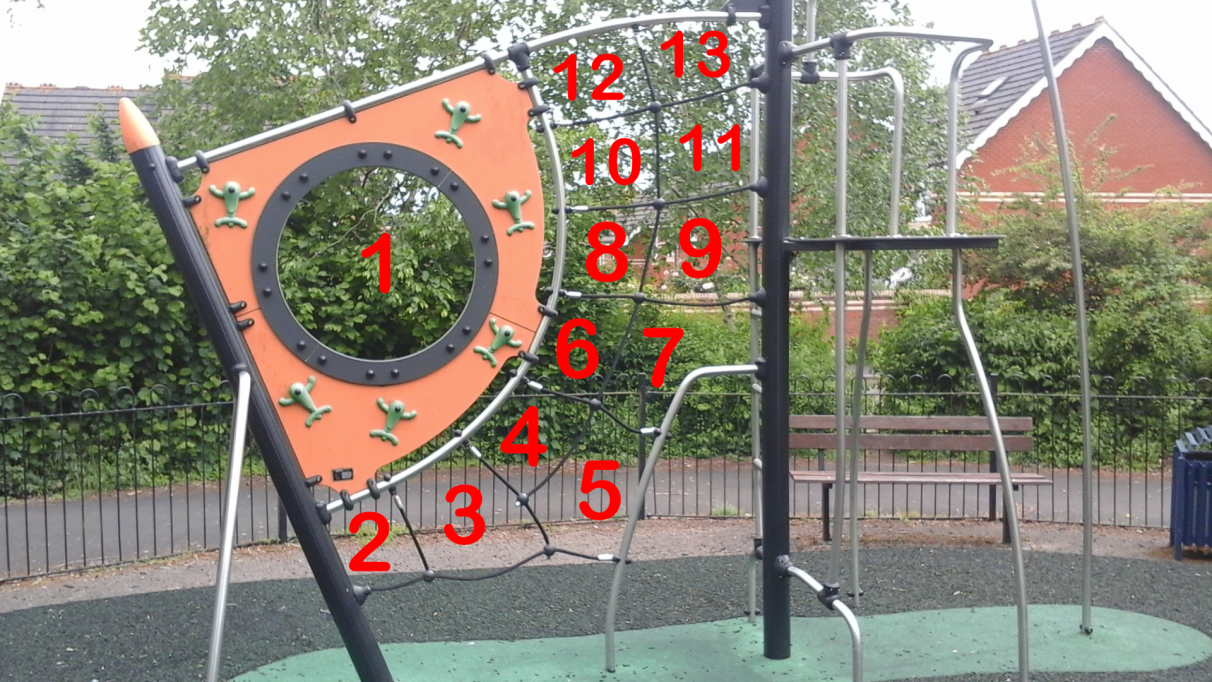 Ah, but there's more! If your shot fails to get through to the other side, but you catch it before it lands on your side, then you get another go. Oh, and you can go for a trick shot if you like, where you walk back maybe twenty paces, then go for a massive overhead throw towards your target. If you do this, your opponent must not attempt to catch the ball if it goes through the other side, so it's a guaranteed progression if you actually succeed. See - there's some strategy to this craziness!

It may never reach quite the same levels of hilarity that its predecessor BallSwing reached, but BallHoops is a guaranteed great time for anyone with the surname Toms, provided you find yourself a willing participant, a good basketball, and a thunderstorm through which you can prove your mettle as an expert BallHooper.