I never did. Because playing Hugo involved calling a premium phone number, speaking Irish on live television, and pressing phone buttons to guide the squeaky-voiced troll down a grainy railroad until you made a random mistake and got crushed by an oncoming train. I’m very glad I never played Hugo.

You might have played one of the many spin-off videogames featuring the Danish-born troll, but it’s the original TV game show that fascinates me. Hugo was exported to television channels in 40 countries for the purposes of luring children into a brave new world of flapping phone bills and parental anger. In Ireland, Hugo (or ‘Hiudai’, as his name was translated) won an award for being the nation's best TV presenter. Twice. This sounds ridiculous. But take two things into account. 1) His only real competition was a turkey. 2) Hugo’s facial expressions were dictated by a real human being wearing this. 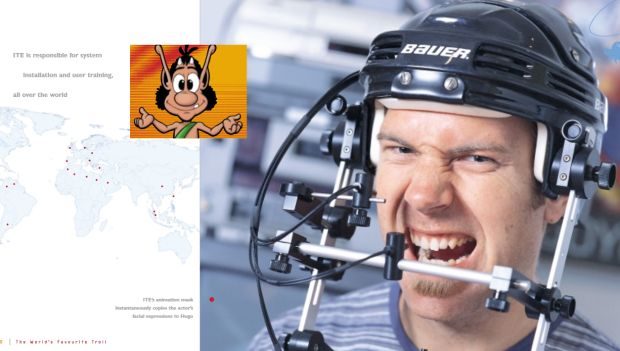 Yes. This was a headset designed by Bjarne Sølvason to “transfer an actor's body, head, and eye movements and facial expressions to Hugo's character on screen... The actor providing the voice of Hugo wore a helmet which contained sensors that would capture his facial expressions and translate them to the character.”

Perhaps that actor deserved your parents’ money after all.