We rescued Rachel Walker from a sweatshop and recruited her to the cause. Safe in our hideout, she revealed a talent for using computers, carrying out simple scripting operations to defraud unwary internet users. After a few months of cracking corporate accounts, she uncovered a huge corruption scandal that rocked the judicial system, scoring our first major PR victory.

Her deft fingers also helped the Liberal Crime Squad break into multiple factories and offices. She smashed up machines, she took part in unlawful protests against the government. She killed eight people.

Liberal Crime Squad was my gateway into Dwarf Fortress. As it came from the same creators, that's not so strange, and they have a few common threads. LCS is more openly satirical, as your revolutionaries fight a right-wing US government by proselytising, blackmailing, and occasionally kidnapping and torturing citizens of one of its cities. Your goal is to change national attitudes towards dozens of issues, from the death penalty to, uh, AM radio. You do this by sending people out to buildings in the city, stealing and vandalising and killing, but often just talking people into joining you, or kidnapping and brainwashing influential people. Less fighty people raise funds and peacefully spread the word by busking, publishing pamphlets, making and selling shirts, and uh, doing sex work. It's bloody good fun, and when you cross the wrong people or simply up the ante, the horror of its violence is much more affecting than a few sentences of text ought to be.

I quite like the optional fascist state start, ostensibly harder as anything remotely subversive carries an automatic death penalty, but simpler since if you're gonna get shot for singing a protest song, you might as well take the gloves off and murder your way to a better world. 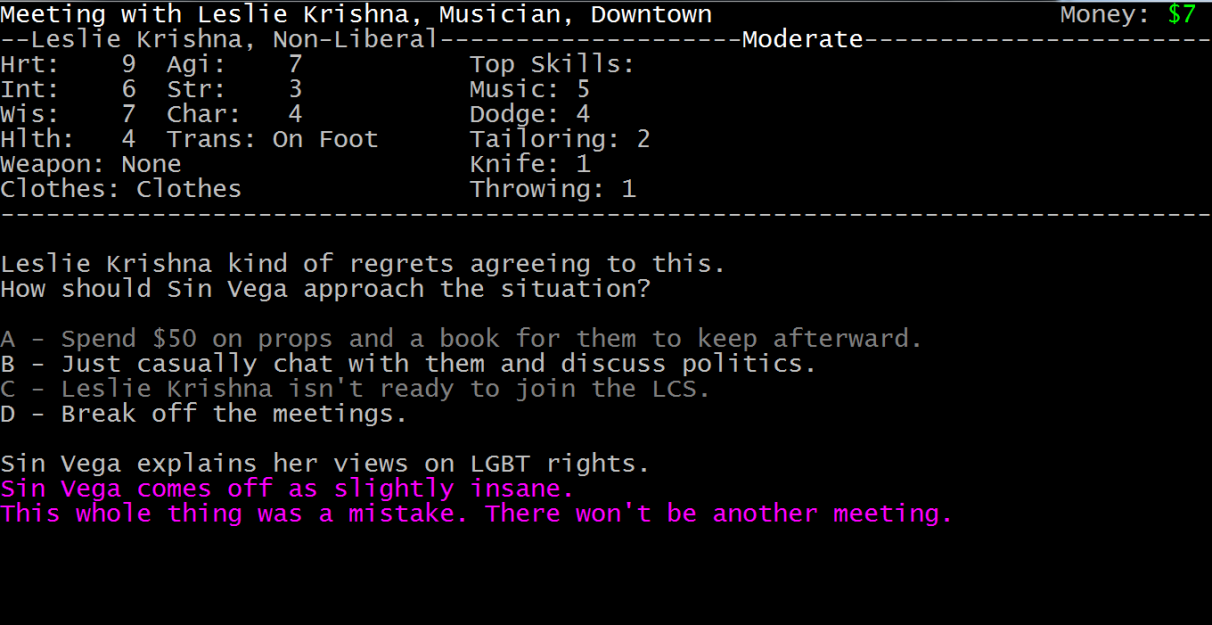 Its interpretation of what is "liberal" (and even the false binary of liberal vs conservative) is already rather quaint in an era when people are finally starting to acknowledge that society is divided along more axes than that. But I like that your actions can lead to the public being extremely critical of the police, but also opposed to promoting racial equality, or deploring animal research while being fine with state torture of humans. Maybe it's not so outmoded after all.

It's free too, and much more approachable than the toady one's meeny miney men manager.